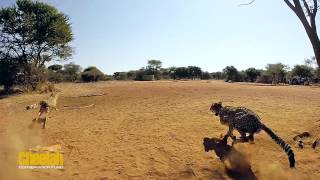 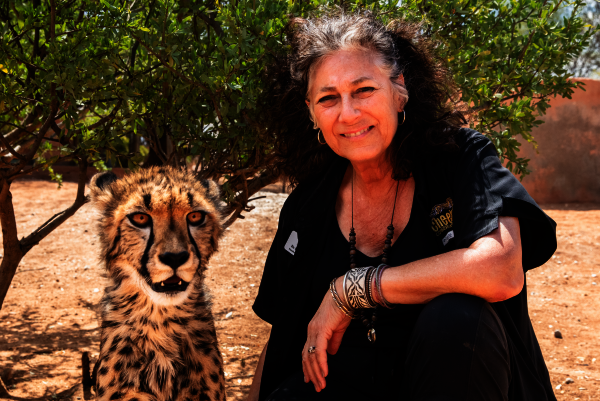 April 3rd is our young cheetah cub, Dominic’s first birthday. He has grown into a beautiful young cheetah. This is a significant day for many other reasons too. On April 3rd, 1991, I arrived in Namibia, moving permanently from the USA with 16 crates full of research equipment, 4 suitcases and my 2 dogs. Then, 25 years later, Chewbaaka a cub I raised from an age as young as Dominic, and our very special CCF Namibia Ambassador, died. April 3rd is a day that gives me pause every year and it’s special now because it’s Dominic’s birthday.

For those of you that have followed the story of CCF’s orphan cub Dominic, April 3, 2019 now marks a special day for his keepers and him as he is turning 1 year old! Dominic came to CCF in April 2018, he was taken in by a lady who’s farm workers had found a man holding him alongside the dirt road asking to sell him. He said he had seen the other cubs and his mother…. The story is very sketchy. The farm workers though knew this was not right and confiscated the cub and gave it to the farms’ teacher, a woman who had a deep care for wildlife.

But, cheetahs are very difficult to care for and unfortunately, she did not have the right facilities or diet to look after him. He became lethargic and unwell after a couple of days. She called the Namibian Ministry of Environment and Tourism (MET) who immediately called CCF. One of our staff, Nadja, was able to pick him up from the woman and brought him to the closest veterinary clinic in Windhoek. After being given sub-q fluids and a careful health check, the next day he was taken to CCF.

A cub as young as Dominic, approximately 10 days old, needed 24hr care and attention. At his young age, Dominic had to be bottle fed 24 -hours a day and was cared for round the clock by CCF’s dedicated staff, Lara and Becky and Dr. Robin. However, due to this high amount of human contact he received during his infancy, he is not a candidate for released back into the wild and will remain at CCF as a resident ambassador for his lifetime, as did Chewbaaka, and a some of CCF’s other resident cheetahs. Lara, Becky, Lauren, Bruce and I have been Dominic’s main caretakers from infancy until now.

Lora and Becky, CCF’s cheetah keepers, share this story of how Dominic is doing today.

The first 6 months, Dominic was just around the other cheetahs in the nursery area, where he could see all the adult resident cheetahs at the Centre. When Dominic was about six months old he was introduced to a young female cheetah, Sasha, who is about six months older, and they have been living together ever since. It was a perfect fit for Dominic as he needed a young cheetah companion to help him learn to live with other cheetahs and to learn about cheetah life. The two of them have done quite well together and as of late, Dominic has been soliciting chase and play behaviour with Sasha.

Two weeks ago, another young cheetah named Savannah was confiscated and brought to CCF. She is a similar age and temperament to Dominic and Sasha, so we decided they should meet. Initially, Dominic was more interested in us, his keepers, until he noticed the new female in his enclosure, to which he walked over cautiously and gave a small hiss. Savannah hissed back and their friendship has blossomed from there. After spending more time together, they can be found playing with boomer balls which we use to encourage exercise. They also spend time watching the young antelope that come and drink from the waterhole opposite their enclosure. They are still trying to figure out each other’s boundaries and Dominic always chirps loudly to let Savannah her know how close she can come to him. Dominic is very vocal, from purring to his keepers to chirping to the other cheetahs.

Over the past couple months Dominic has lost his baby teeth and has all his adult teeth now. Just like with human babies, Dominic needed extra care during teething. We would give him blood ice blocks to soothe his mouth and help with inflammation, as this is a very rough time for cubs.

Dominic has also continued to grow, he is now about 2/3rd of his adult weight. He currently weighs just over 25kg which is a far stretch from the 800g he weighed when he first arrived.

Dominic is now perfectly spoon trained as well. This involves taking treats gently from a long handled, purpose-built spoon that has a meat reward in it. It is important for him to learn this skill, as the spoon is often used to help medicate our cheetahs. The ‘spoon’ also acts as a ‘target’, so he can be manoeuvred to different areas when necessary, like asking him to move from pen to pen. Since learning that the spoon will reward him with treats, if we are not quick enough to reward him, he will make his classic loud chirp noise to let us know they’re not being fast enough for him!

As a cheetah, exercise is very important. Dominic has also learned how to run on our mechanical lure course, to keep him in good health. This is where we encourage him to chase a rag that is being pulled along fast by our mechanical lure. On he catches it, he then receives a meat reward on the spoon (his favourite is heart). It is important that we exercise him as he does not hunt for himself. Not only is it good for his physical health but also his mental health. He always gets very excited when he is moved in to the run pen as he gets to engage in play, positive interaction and bonding time with us, his keepers. Dominic likes to run as fast as possible using all his energy in one go unlike the other cheetah that pace themselves. He’s still learning about and perfecting his running skills and is working on the pesky corners of the lure course that he misjudges and takes very wide.

Dominic is a very independent and vocal cheetah. He has no qualms in making his voice heard as loud as possible to attract our attention in case we have extra treats for him! He interacts with other cheetahs the same way, even though he is small in stature he has a very loud voice and likes to make himself heard. If anyone approaches him through the fence, staff, interns or guests, he will always purr as loud as possible! Happy First Birthday, Dominic!! 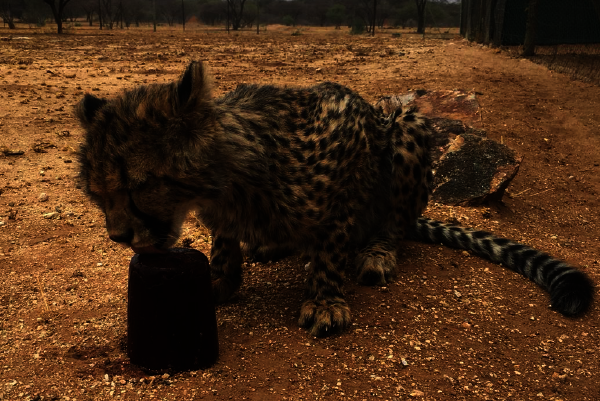