How Rotary members are fighting against polio 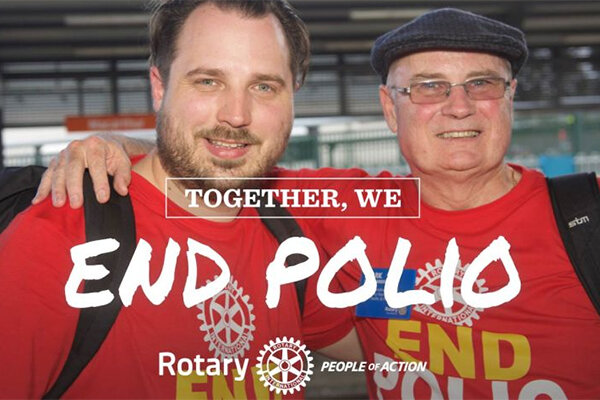 Rotary members have been at the center of the worldwide effort to eradicate polio for more than three decades. Rotary launched PolioPlus in 1985 and helped found the Global Polio Eradication Initiative in 1988. At that time, wild poliovirus paralyzed hundreds of children every day, with an estimated 350,000 polio cases across more than 125 countries in one year. Since then, cases have plummeted more than 99.9%, sparing more than 20 million people from paralysis.

But as recent polio detections have revealed, polio remains a threat everywhere as long as it exists anywhere. In the days and weeks leading up to World Polio Day, 24 October, Rotary members around the world are holding events to raise awareness of the need to End Polio Now. Below are a few of those efforts.

Mark and Dave Anderson, members of the Rotary Club of Beecroft, will travel the entire train system in Sydney, visiting more than 189 stations on 24 October in an effort to raise funds and awareness for End Polio Now. They have conducted the challenge each of the past four years, raising more than $450,000, matched two to one by the Bill & Melinda Gates Foundation. Their goal this year is to raise another $200,000. You can help out by riding the train with the dynamic duo if you are in Australia or by donating to support their challenge.

Rotary members in District 2630, Japan, worked with local transportation companies to decorate buses with End Polio Now colors. They used red (a color in the EPN logo); purple (the color used to mark the little finger of children who receive the polio drops during immunization days); and yellow (the color of vests warn by vaccination volunteers).  In addition, End Polio Now appears above the entrance of the buses.

Hwamun Park, a member of the Rotary Club of Incheon Sinsegae, has been carrying an End Polio Now flag along the Camino de Santiago, a network of pilgrimages leading to the cathedral of Santiago de Compostela in Galicia in northwest Spain. As a hiker, completing the pilgrimage has been on her bucket list. A fellow Rotarian offered to donate a dollar for every mile that Park walked. She walked more than 1,000 miles between May and July, talking to many people she met about Rotary’s top priority. “Integrating Rotary’s initiatives with what you want to do in life, that’s how Rotarians live,” Park says.

Michel Porhel, a member of the Rotary Club of Laval Ambroise Paré, is planning to repeat his 2019 fundraising effort, when he competed in the Marathon des Sables, raising €5,000 (roughly $4,800) for polio eradication. On 21 April, he will set off on the 240-kilometer event (about 150 miles) with an even more ambitious fundraising goal, supported by members of his club and other Rotarians in District 1650.

Eleven days, six hours, 45 minutes. That’s the time it took Kurt Matzler, a member of the Austrian Rotary Club Innsbruck-Goldenes Dachl, to cycle 3,000 miles across the United States during the Race Across America in June, raising $1.2 million for End Polio Now.

Matzler finished sixth among individual cyclists and crossed 175,000 feet of elevation change, with temperatures up to 122 degrees Fahrenheit in the Mojave Desert. He only allowed himself four hours rest a day. Matzler, who has completed the same race previously with cycling teams, had a particularly rough time of it this go around, having to detour due to wildfires increasing the amount of elevation change, and facing both cold and wet conditions in the Rockies. He also overcame several bike repairs to complete his goal.

To learn more about Rotary's efforts to end polio and how we are celebrating World Polio Day on 24 October, go to https://www.endpolio.org/ 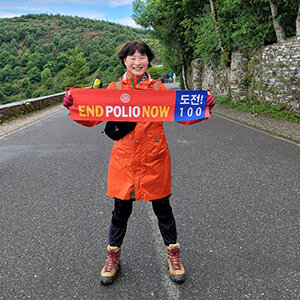 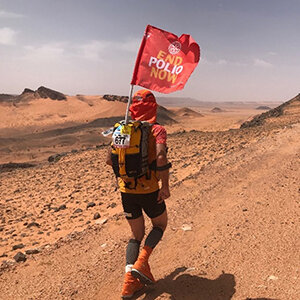