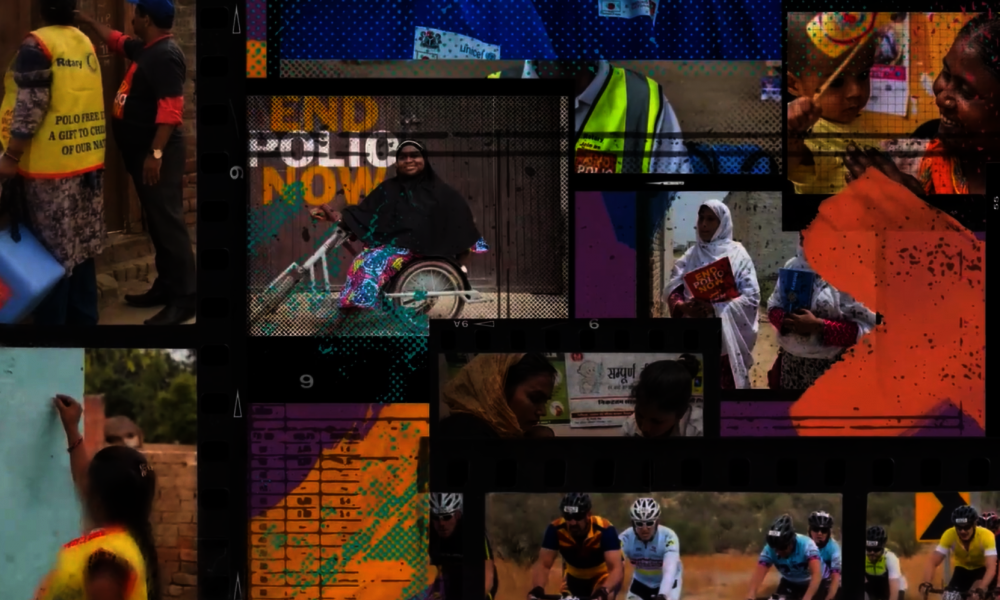 Paralympic medalist and TV presenter Ade Adepitan, who co-hosted this year’s program, says that the eradication of polio in Africa was personal for him. “Since I was born in Nigeria, this achievement is close to my heart,” says Adepitan, a polio survivor who contracted the disease as a child. “I’ve been waiting for this day since I was young.”

He noted that, just a decade ago, three-quarters of all of the world’s polio cases caused by the wild virus were contracted in Africa. Now, more than a billion Africans are safe from the disease. “But we’re not done,” Adepitan cautions. “We’re in pursuit of an even greater triumph — a world without polio. And I can’t wait.”

Rotary Foundation Trustee Geeta Manek, who co-hosted the program with Adepitan, says that World Polio Day is an opportunity for Rotary members to be motivated to “continue this fight.”

She added, “Rotarians around the world are working tirelessly to support the global effort to end polio.”

Dr. Tunji Funsho, chair of Rotary’s Nigeria PolioPlus Committee and a member of the Rotary Club of Lekki Phase 1, Lagos State, Nigeria, told online viewers that the milestone couldn’t have been reached without the efforts of Rotary members and leaders in Africa and around the world.

Funsho, who was recently named one of TIME magazine’s 100 Most Influential People of 2020, says countless Rotarians helped by holding events to raise awareness and to raise funds or by working with governments to secure funding and other support for polio eradication.

“Polio eradication is truly a collective effort ... This accomplishment belongs to all of us,” says Funsho.

Rotary and its members have contributed nearly $890 million toward polio eradication efforts in the African region. The funds have allowed Rotary to award PolioPlus grants to fund polio surveillance, transportation, awareness campaigns, and National Immunization Days.

This year’s World Polio Day Online Global Update was streamed on Facebook in several languages and in a number of time zones around the world. The program, which was sponsored by the Bill & Melinda Gates Foundation, features Jeffrey Kluger, editor at large for TIME magazine; Mark Wright, TV news host and member of the Rotary Club of Seattle, Washington, USA; and Angélique Kidjo, a Grammy Award-winning singer who performs her song “M’Baamba.”

It’s impossible to talk about 2020 without mentioning the coronavirus pandemic, which has killed more than a million people and devastated economies around the world.

In the program, a panel of global health experts from Rotary’s partners in the Global Polio Eradication Initiative (GPEI) discussed how the infrastructure that Rotary and the GPEI have built to eradicate polio has helped communities tackle needs caused by the COVID-19 pandemic, too.

“The infrastructure we built through polio in terms of how to engage communities, how to work with communities, how to rapidly teach communities to actually deliver health interventions, do disease surveillance, et cetera, has been an extremely important part of the effort to tackle so many other diseases,” said Dr. Bruce Aylward, senior adviser to the director general at the WHO.

Elias said that when there are global health emergencies, such as outbreaks of other contagious diseases, Rotarians always help. “They take whatever they’ve learned from doing successful polio campaigns that have reached all the children in the village, and they apply that to reaching them with yellow fever or measles vaccine.”

The program discussed several pandemic response tactics that rely on polio eradication infrastructure: Polio surveillance teams in Ethiopia are reporting COVID-19 cases, and emergency operation centers in Afghanistan, Nigeria, and Pakistan that are usually used to fight polio are now also being used as coordination centers for COVID-19 response.

The online program also included a video of brave volunteer health workers immunizing children in the restive state of Borno, Nigeria, and profiles a community mobilizer in Afghanistan who works tirelessly to ensure that children are protected from polio.

Kluger spoke with several people, including three Rotary members, about their childhood experiences as “Polio Pioneers” — they were among more than a million children who took part in a huge trial of Jonas Salk’s polio vaccine in the 1950s.

The future of the fight against polio

Rotary’s challenge now is to eradicate the wild poliovirus in the two countries where the disease has never been stopped: Afghanistan and Pakistan. Routine immunizations must also be strengthened in Africa to keep the virus from returning there.

To eradicate polio, multiple high-quality immunization campaigns must be carried out each year in polio-affected and high-risk countries. During the COVID-19 pandemic, it’s necessary to maintain populations’ immunity against polio while also protecting health workers from the coronavirus and making sure they don’t transmit it.

Rotary has contributed more than $2.1 billion to polio eradication since it launched the PolioPlus program in 1985, and it’s committed to raising $50 million each year for polio eradication activities. Because of a 2-to-1 matching agreement with the Bill & Melinda Gates Foundation, that means that, each year, $150 million goes toward fulfilling Rotary’s promise to the children of the world: No child will ever again suffer the devastating effects of polio.