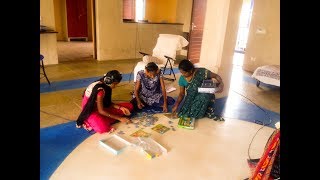 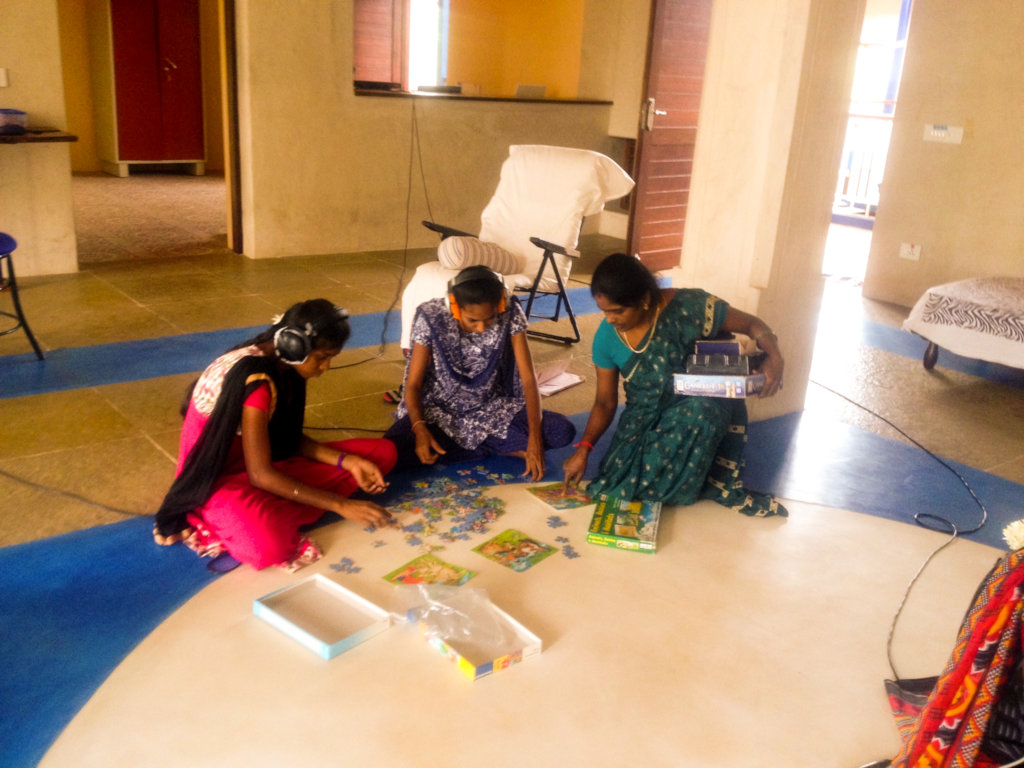 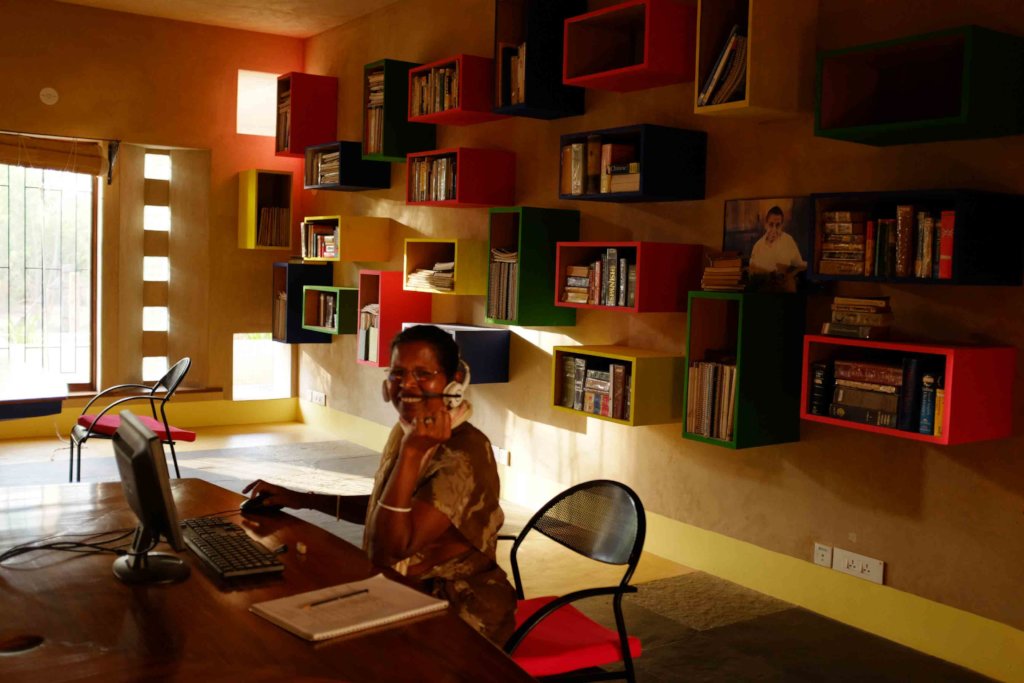 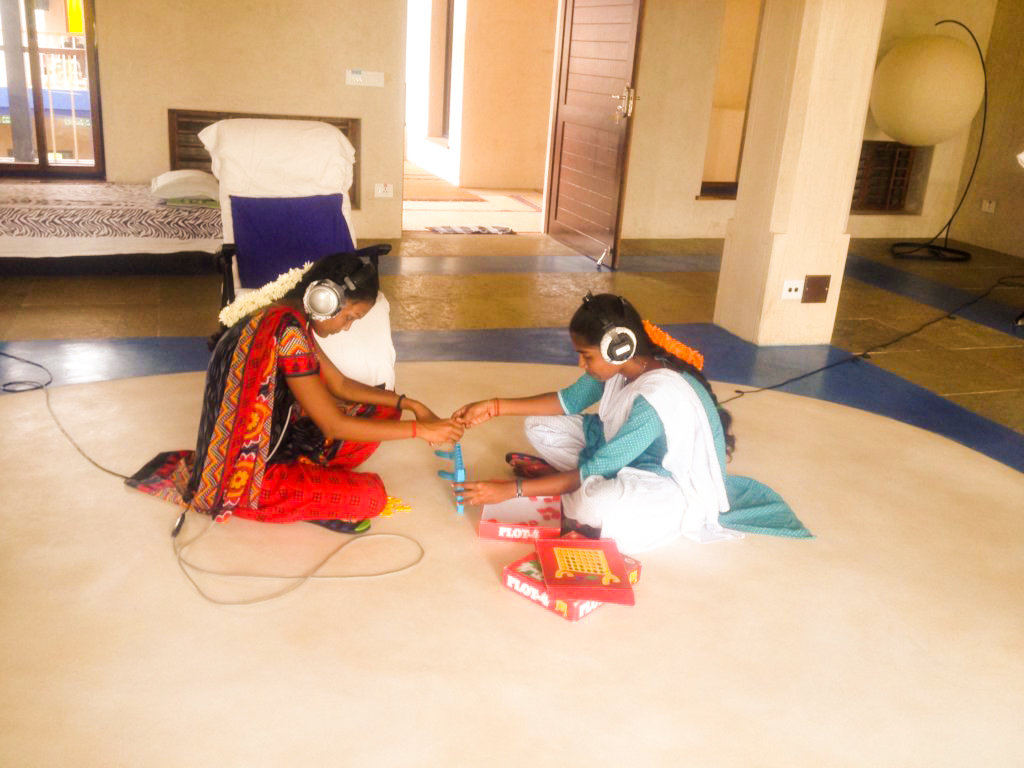 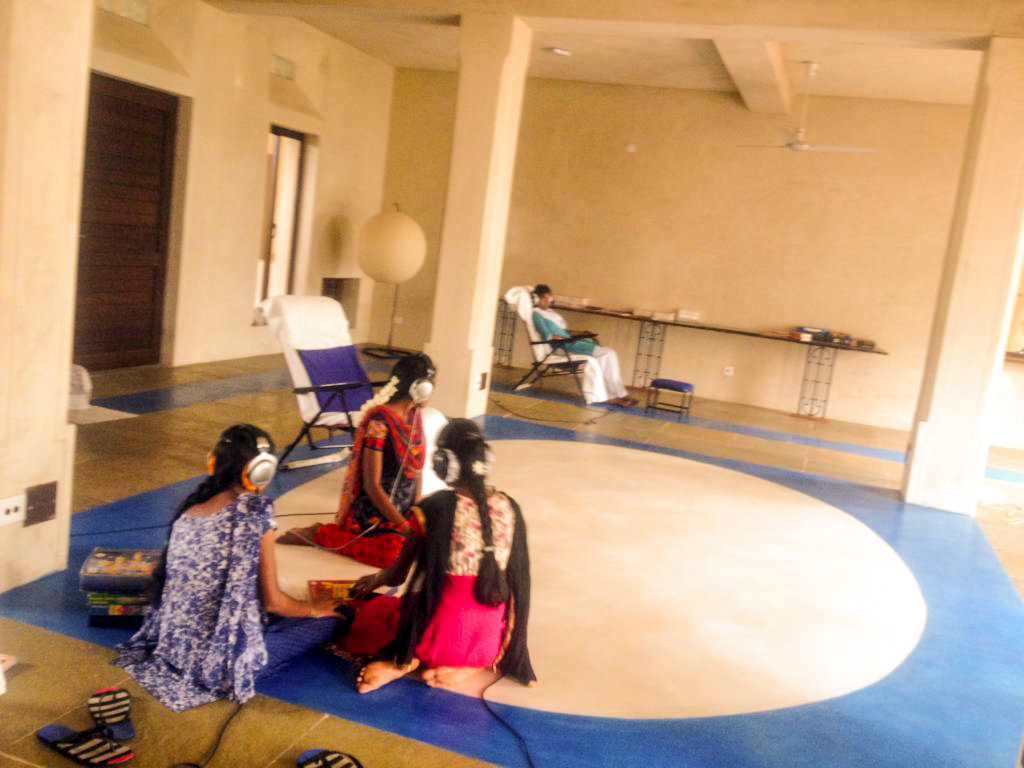 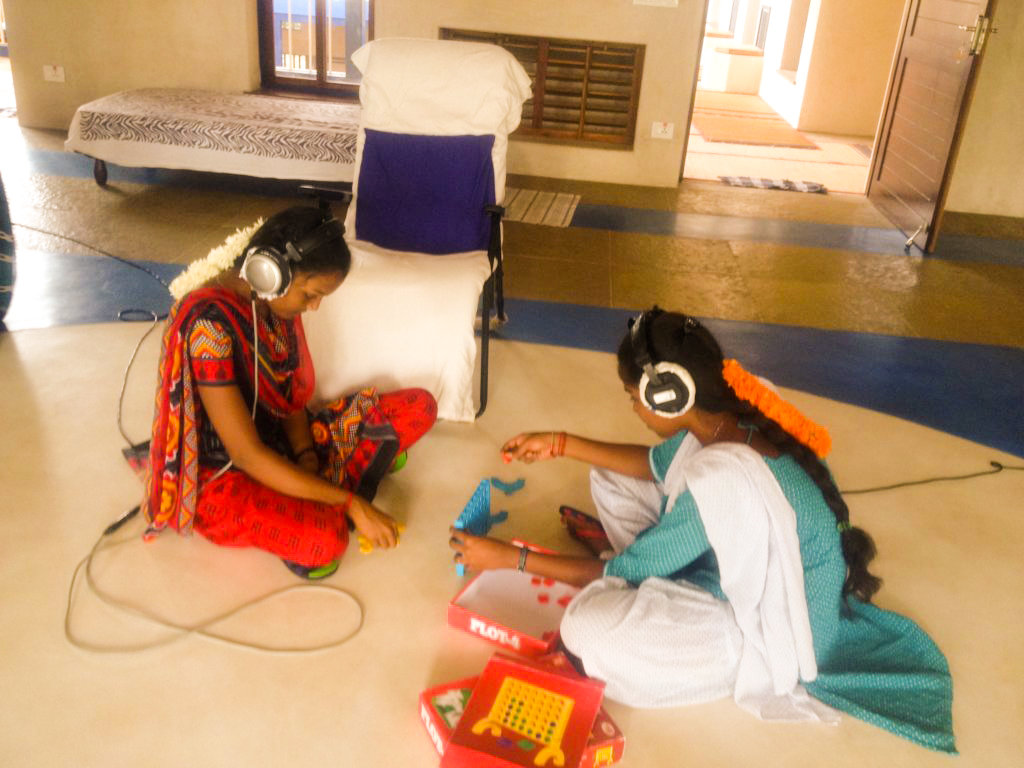 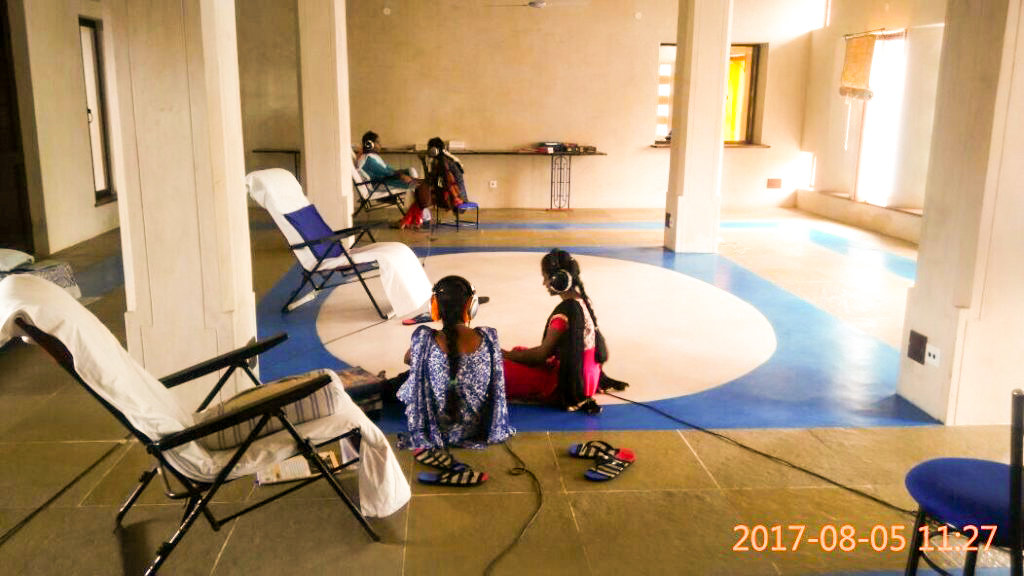 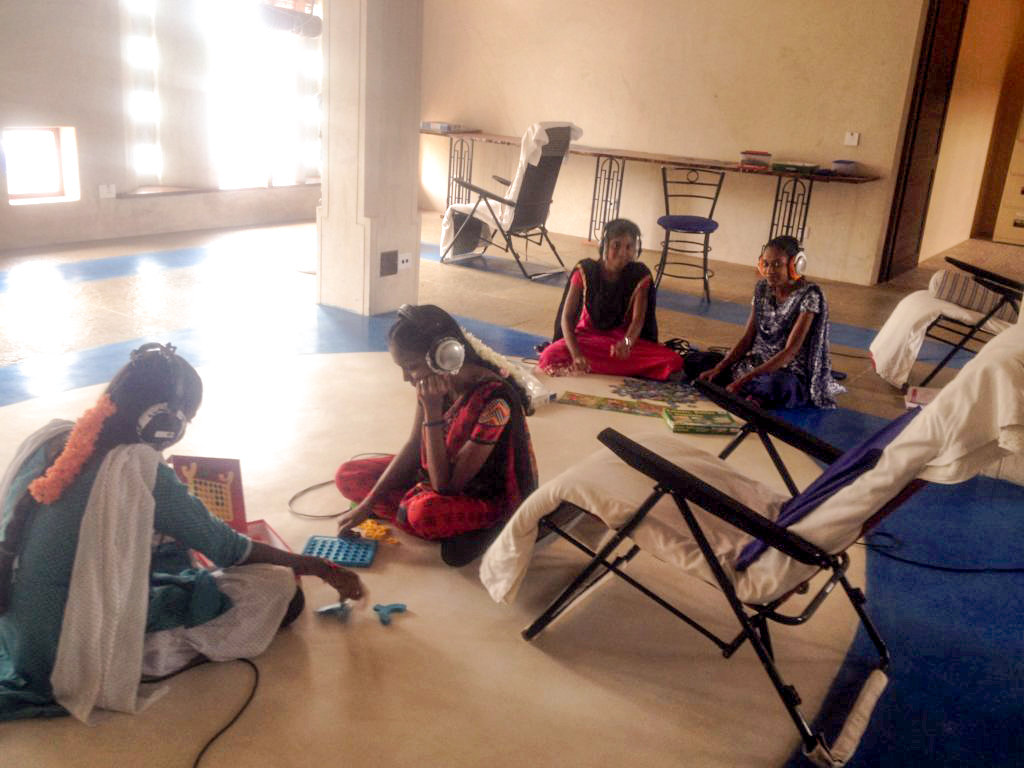 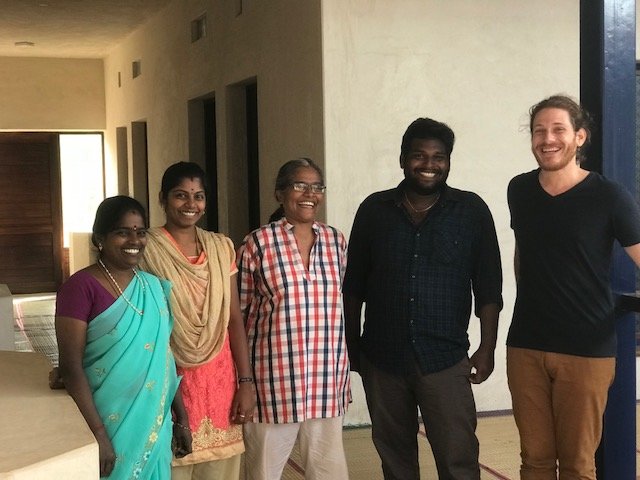 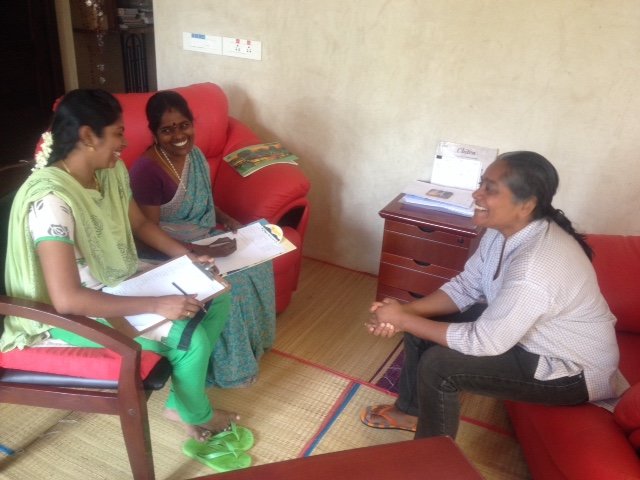 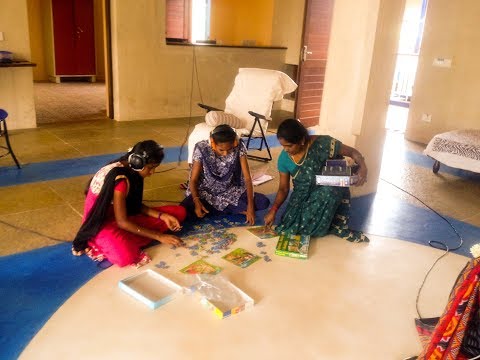 By Mita - With Tapas, Project Leaders and Eternal Idealists

Our June report mentioned our two goals: the Women's Group English training, and the Tomatis classroom.

Our mid-Sept report mentioned that I was going to Germany on my way to the Tomatis practitioners conference in Switzerland and that I would find a way to solve the headphone import impasse. I can't really reveal all the details, but let's just say, by a series of miracles, I managed to bring all of the 8 headphones, 2 headsets and 1 distribution panel back with me! It was a huge lesson for me in total surrender, and I was amazed at every step! Tapas and the rest of the team were energetically with me all the way.

On getting back though, the fight against the highway proposed through Auroville took a very big chunk of my time and energy. It was almost full-time engagement with a big group of Aurovilians on the "Highway Task
Force". There has been somewhat positive news on that, and it was quite an experience, but it did mean that there was very little time left to work on the project.

Now that there is a temporary breather, I've gotten back to the project again.

We realized that just as we had zapped the whole issue of VAT etc, we had also zapped the fact that along with the equipment, we also needed the Tomatis software programs! In fact, we needed two programs. The big problem is that the programs cost 2500 Euros each - European price (so 5000 euros!) - with the Indian price we had negotiated some years ago being Euros 1250 each, so Euros 2500! We hadn't bargained for this and once again, it was a huge spanner in the works. The protected program comes on a dongle, and we needed two dongles to run (i) the Global Giving program and (ii) the Tomatis classroom.

We had already sent a letter to all the units of Auroville, and published in the Auroville News and Notes about the start of the programs in December, and even had a first meeting of the women interested (quite a few of whom came with their husbands!). But without the dongles, we couldn't (can't) do anything!

Now, while in Germany, one of my major tasks had been to finish the editing of an English translation of this major book on the Tomatis method, written by our Tomatis friend and colleague in Germany, who is also our supplier (as well as a donor through GG!).  I had sat from morning to late night, every day, over 8 days, at a desk, working non-stop; getting up only for meals (sumptuous healthy meals prepared by his wife). I didn't even go out of the house until the day before I left! It was a marathon, but I was determined to finish. Tapas has sent me off with this major goal in mind! I hadn't negotiated any payment for this work because I was just focussed on getting it done. The authors had suggested that a year's worth of sales of the English edition could come to the Lab as our payment for the work. It has been a pending project on the backburner for a few years while we were building the building...... Well, we decided to ask our friend and supplier, whether he would send us the two dongles we needed, as payment for this work. And guess what? He said Yes!  So this was another miracle too!

So we shall soon be getting the dongles! We've even found someone from Germany who can bring them to us.  We will get them next week!.

We've ordered the two sound cards (Rs.195K approx - $2716 or Euros 2389). (Yes, indeed! It is REALLY crazy that we have tried to offer this outrageously expensive but marvelous Tomatis method here in India). We now need to put together money for an amplifier and a laptop, which we'll do in the next two weeks, and then we'll be ready!  Mano and Raj have been absolute bricks for the equipment research and orders.

It has taken much much longer than expected, and it does mean a complete paradigm shift for us and the Lab..... So it makes sense that we start in the new year!

A special Thank You to Christa and Anya, who made their donations recurring; a very huge thanks to Jane, whose big recurring donation over many months saved us each end of the month, to Diana Brassard who gave another wonderful donation after the last report, and to Sandy for recently remembering us on Giving Tuesday. And a huge, huge thank you to all of you who participated.  Every single amount has helped!

In our next report, we look forward to showing you pictures of it all in action!!!

If any of you have the possibility of making even a $10 recurring monthly donation, that would be great,  because it would help towards the running costs the project; besides which GlobalGiving has a matching campaign on till the end of the year for all recurring donations.

So, we will launch the program in January.

Thank you so much for your patience and not losing faith in us!

Wishing you all happy holidays, whichever tradition you celebrate in!

Donating through GlobalGiving is safe, secure, and easy with many payment options to choose from. View other ways to donate
Auroville Language Laboratory has earned this recognition on GlobalGiving:

GlobalGiving
Guarantee
Donate https://www.globalgiving.org/dy/cart/view/gg.html?cmd=addItem&projid=32455&rf=microdata&frequency=ONCE&amount=25
Please Note
WARNING: Javascript is currently disabled or is not available in your browser. GlobalGiving makes extensive use of Javascript and will not function properly with Javascript disabled. Please enable Javascript and refresh this page.