Sanctuary and justice for survivors of rape 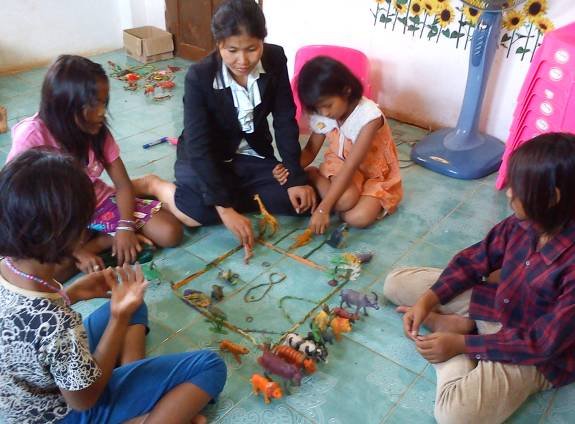 Srey is a 14 year-old girl from Pailin province, which remained a stronghold of the Khmer Rouge well into the 1990s. Poverty drove Srey’s mother to migrate to Banteay Meanchey to seek work as a cook in the bustling but impoverished town of Poipet. An eighth grader, Srey was left at home alone with her father and her three younger siblings.

After her mother left, Srey’s father began to repeatedly and brutally rape Srey, threatening to hurt her if she told anyone. Crushed, terrified, and desperate to escape, Srey eventually mustered the courage to tell her mother and her uncle what had happened. With their support, Srey filed a police report and her father was arrested. While awaiting trial, Srey came to stay at Lotus Outreach’s safe shelter where she could receive legal assistance, counseling, healthcare, and social services.

When Srey first came to the shelter, her shame and sorrow consumed her. She refused to interact with the other clients, and told her counselors that she thought she was “the most shameful person in her village.” Srey suffered from depression, anxiety, and insomnia and was quick to anger. She was traumatized by the incident as well as the overwhelming fear that her father would be released from jail and come after her.

Through individual sessions, Srey’s counselor gradually built a trusting relationship with the girl and Srey began to open up about what had happened. She soon began to attend group counseling sessions and spoke openly about what had happened to her, offering support to other clients who had also been raped. Over time, Srey developed friendships with other girls at the shelter, returned to school during the weekdays, and even started taking a sewing class. She released her stress through reading books, writing down her incident and then ripping up the paper, drawing pictures, and practicing mediation. Soon Srey told her counselor that she now loves and values herself, and no longer blames herself for what happened. Srey has recently expressed a desire to finish high school and continue on to college to become a nurse. And with the support of the shelter’s legal staff, Srey’s father has now been sentenced to prison for rape.

Srey's case is unfortunately not unique. During 2012, 19 other rape victims stayed at the safe shelter, nearly 80% of whom are children. To date, eight of the perpetrators have been convicted and another five are awaiting trial. This represents a remarkable sea change in the attitudes of both rape victims and the courts, as in 2009 there were just 468 recorded cases of rape in Cambodia despite the fact that one in four men in the region report having raped a girl or woman. Today, approximately half of rape cases to come through our shelter result in a conviction.

Thank you for giving young girls like Srey hope for a brighter future. To learn more or pledge additional support, please visit http://www.globalgiving.org/projects/ctc/