Our time in the Azzaden Valley 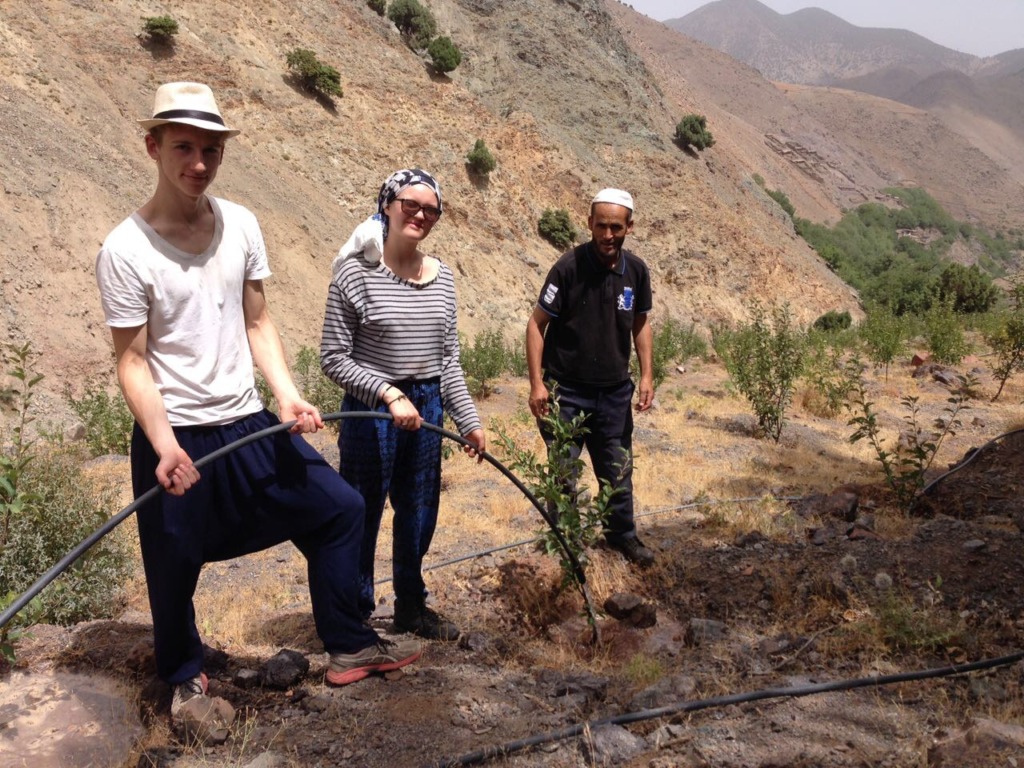 The Azzaden Valley is part of the El Houz region, 70 km south of Marrakech. It is near the Toubkhal national park, which is developed towards tourists. In contrast, the nine villages of the Azzaden Valley are nearly off the beaten tourist track, which is beautiful. We found the Moroccan spirit that you won't find in Marrakech, but rather in the mountains! Nevertheless, the people suffer from fundamental problems like water scarcity, lack of edu cation, medical treatment and transportation.

One may assume that they have lost hope,but on the contrary, they are the most friendly, hospitable and jolly people altogether! It seems as if the inhabitants of Azzaden Valley live on another planet, one with peace and harmony. When you see the women with cows, sheep, goats wandering down the dry river and next to them, the children of all ages walking around with black lips from the blackberries, searching for medicinal plants, your heart will open! They live with no worries except the struggle for animals and trees, because everyone is a farmer,and support themselves. There is a lot of work to be done, like repairing the waterways, watering (also with pesticides), tying up and harvesting the trees, eating, sleeping and discussing, but nobody is left alone; teamwork is always in order! That is the world of the men as the women are almost completely separated; they don't work on the fields, but take care for the children and the animals, collect food for the animals, wood to cook, and also herbs for the traditional tea. Moreover, they cook and fetch water from the spring as housework. They even eat in the kitchen and not with the guests or men (besides a few exceptions)!

We were honored to take part in both areas: First of all we had to learn to "fee a tai", the traditional way of pouring in the tea (which is made of a lot of sugar, some green leaves, healing plants that smell very very delicious and grow everywhere like weeds and then some more sugar). There is an equivalent of sweetened coffee, something like a confectionary, but the tea is sipped all day long, at least 4 times a day! The ceremony looks like this: The first three cups are poured back before the first gulp is tasted. If it tastes like sugar you say "imim" and go on with pouring the other cups. But one need a lot of skill and craft to not lose a drop when pouring back, even more to fulfill the task with enough drive and height for a nice arc. It's more or less all about the height because the aim of the ceremony is a gorgeous white bubbling foam that is achieved by lifting the teapot higher and higher while pouring in.

We tried over and over until Maurice brought it to perfection! The next thing we dedicated ourselves to was the secret of making the traditional bread "arm". The woman of our host Ibrahim showed us how she used to bake it. At this point we needed to learn some words about our accommodation, a gîte d'étape in Tiziane, but we were more like members of the family with a lot of free space. This included a terrace where we could spend a wonderful night under the starshine, only the Milky Way above us, the moon shining and a falling star crossing the sky in front of our eyes. All our wishes were devoted to the valley and to the best of the people who so kindly took us into their rows. We neither felt like strangers, nor as tourists, but as friends, as insiders:D We owe that to Ibrahim who always made us feel comfortable! We were allowed to eat at his home dozens of delicious meals from daily tajine with bread, olives, self made butter, jam, chocolate, diverse fruits over Couscous and lenses to noodles and rice with milk. We had at least 4 meals every day; breakfast (at 11 am because we slept a lot), lunch (at 3 pm), a snack (at 9 pm) and dinner (at 11 pm). Furthermore, we got a lot of extra meals due to our trips around the villages of the valley where the hospitality had no end. When days passed, also the women who normally ate alone in the kitchen joined some meals. The youngest one taught us how to speak Berber and how to dance "afus-afus". It just was a pity that the television was their single amusement! We failed to give the children an understanding of the card game UNO, instead we had even more fun with kicking around a plain basket without touching the ground until one of the girl fell of her chair laughing! The mother laughed at her as well. We felt as snug as a bug in a rug!

Back to the bread: The wife of Ibrahim took us to the kitchen where she had prepared everything. In the bottom of a tajine she mixed warm water with sugar and yeast. Then she added flour and more water with one drop of oil. These were all the ingredients, now it came to the practical application. The dough needed to be literally grabbed, we dug our fingers into the gloop like children and splashed about with childish glee. After it got more tightly it was rolled smoothly from one side to the other until pieces could be teared off which were formed to balls. Each of the balls got with the right technic to a bread. After an hour it was baked in a clay oven directly next to the fire.

Sounds like we did only women's  work? Not at all, most of the time we hiked around to visit the different villages to gain knowledge and personal sight on the problems and needs of the communities and the rest of the time we helped Ibrahim with his work. Well that's not the whole story: We struggled a lot with completing a chess set out of wood...with 2 knives and 1 saw we carved all 32 figures just for fun between the work.

The work we did:

Sounds easy, but the waterway was handmade out of mud and constantly needed to be repaired. More problematic was the condition of the pipes because of the uncountable holes that needed to be taped with plastic pieces. A big amount of our time was spent  laughing, sitting in the sun and enjoying the amazing view over the mountain range, drinking tea as well as having lunch. Another aspect one should know, that if there is work to do, the farmers decide when and how long they want to work, after all after today is tomorrow where you can do the rest. That's the way of thinking, the way of living: Do what you have to do as long as you want. Eat when you're hungry, sleep when you're sleepy, enjoy what you have. If everybody was living this way...

Not the same at all! Before, we were in the mountain, now we acted in the flatland. The genius construction of watering bases on wholes around the trees so that the thirsty soil won't take the water away too fast before the trees got enough (the trees never ever get enough water but like this they survive). Therefor we hacked a deepening around the trees. Maurice' effort was honored by blisters all over his hands and Jana's attempts ended up with children in her arms. All in all very successful, wasn't it! At least a great experience of a farmer's life.

Climbing on apple trees fits better as a description of what we did or were supposed to do. In fact Ibrahim's son replaced us after the first tree. We started to collect all the rosy apples that fell down while the action. Rapidly, we had too much to carry by ourselves and cleared off with the apples. We only left behind an arrow made of old apples we found underneath the trees. The issue reveals in the huge amount of bad apples that cover the ground. Still, we made our way back collecting wood to boil the fallen apples to purée. We thought that would be a good use instead of letting them rotten. Unfortunately, it took far too much time, required too many resources and wasn't the highlight in its result. For us it felt very ancient to cook on a clay oven with gathered wood from nearby, sitting on the ground with no light except the fire and the children around who joined us.

The hardest part! It combined hiking (one village took us one and a half hour to get there) with a lot of body language to deal with (and a lot of tea and food of course). The difficulty looked like this: The inhabitants spoke Berber, Darijap and Arabic. We on the contrary speak German, English and French. Nevertheless we got along; we just watched wherever something came into view, touched and tested it afterwards. An example: We caught eye of some farmers who didn't water the trunk but the leaves. So we took it ourselves (it smelled strange), afterwards we wanted to try some apples but weren't allowed to. The gesture was hand over throat and the tongue outside. Any guess what that means?

In many cases we just visited the beautiful agricultural plantations, ate a lot of fruits (apples, plums, walnuts, passion fruits, prickly pears), scribbled down the needs the inhabitants could communicate with finger pointing (mostly about lack of water and destroyed water paths) and admired the big tomatoes, potatoes, onions, zucchinis, beans, hot peppers and other stuff we weren't accustomed with but looked like grown out of nothing (in one village it wasn't some vegetable that astounded us most but a 113 year old guy, sitting in the corner still alive!!). To our luck we discovered two English speaking people who could answer some of our questions. However, looking, taking pictures and walking around was the best strategy!

Last but not least we experienced the seldom honor of taking part in a traditional dance with a traditional band and customs! Than, we really felt acquainted, when after ten days our adventures ended. Just one last adventure waited for us on the next morning! We had to get up at 5 am, took all our luggage to the road and waited for the truck to take us back to Marrakech. A Christmas train appeared out of the dark, bright front lights that blinded us, red lights on both sides rattling directly towards us. The best end for such an adventure; a truck full of boxes with apples, goats, luggage and people crowded together on the loading space. Vehicle documents that were passed from an approaching truck on our way and a winding road that was more a hiking path than anything else, everything rumpling upside down. That was fun!

Thanks to HAF which enabled us to go there and even more thanks and cheers to Ibrahim who let all the experiences come true!

« Previous - "Akrick Nursery Program"
"What a Palestinian can Le..." - Next »
Comments: