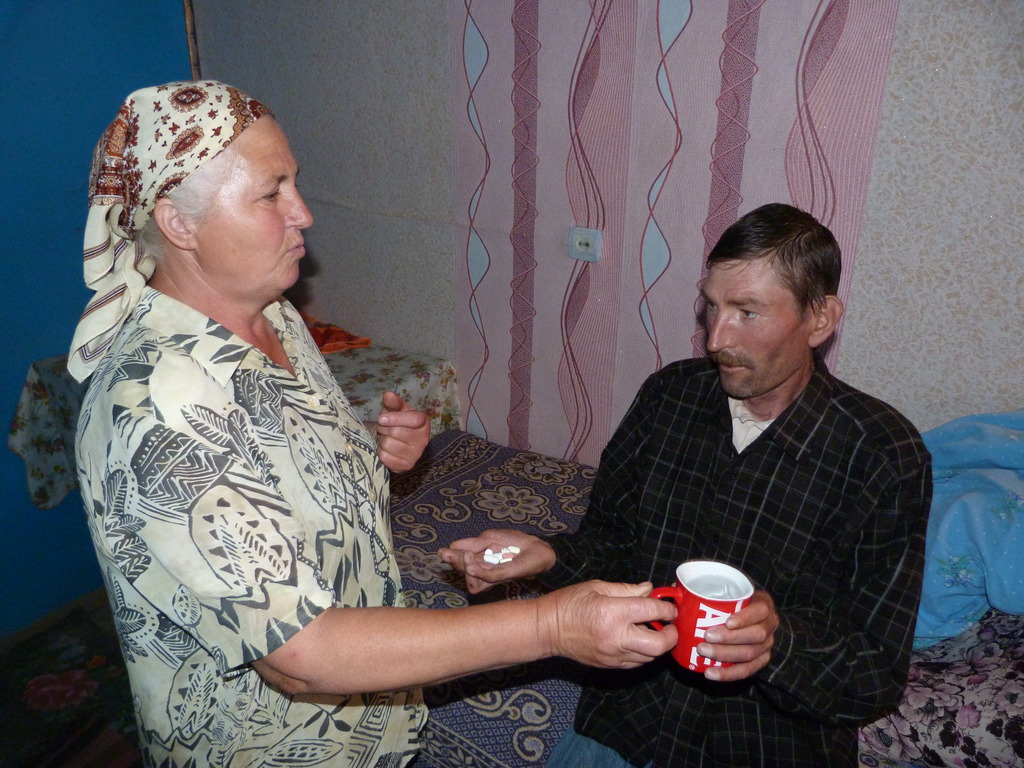 Speranta Terrei is in the thick of a multi-drug resistant tuberculosis (MDR-TB) calamity in Moldova. Among 90 patients receiving treatment support under our Global Giving project, 20 have MDR-TB.

Petru Moroz, who lives in Dancu village in Hincesti district, came to Speranta Terrei’s attention through the Hincesti TB community center. Petru had been treated for TB in 2008 and again in 2011, but each time he stopped taking anti-TB drugs before the 6-month regimen was completed. Poverty and alcoholism were the principal reasons that Petru interrupted TB treatment. In early 2012, he was diagnosed with pulmonary TB with extensive bilateral destruction. This time, the strain was identified as MDR and he was hospitalized for MDR-TB treatment from February to November 2012.

After being discharged from hospital, Petru was back to being homeless and at risk of discontinuing the 24-month MDR drug regimen until Iulia Iurciuc intervened. Iulia is Speranta Terrei’s first moderator in Dancu and she made it her duty to help Petru become cured of TB this time around. Petru wants to finish treatment, expected in January 2014, and says, “it is easier to be ill when there is a person near you who awaits your recovery as if it is a holiday, a day of celebration.”

Iulia has a profound understanding of the disease because she had childhood tuberculosis in the early 1960s. At age 4 years, Iulia spent a year in hospital for TB treatment; at age 7 years she had a relapse case and underwent her first lung surgery to resect an entire lobe. There followed six pleural punctures to remove fluid from the pleura and two more lung surgeries. Today, only Iulia’s left lung remains.

There are 50 years between Iulia’s protracted TB treatment and Petru’s recurring disease. Iulia’s memory of TB and how a patient feels is vivid and she says, “people affected by the same disease can understand and support each other in adversity.” The attached photo shows Petru taking anti-TB drugs from Iulia.

National Public Radio in the U.S. broadcast a series in June on MDR-TB in Moldova: http://www.npr.org/search/index.php?searchinput=TB+Moldova&dateId=365&programId=0

In one of the stories, Speranta Terrei’s moderator, Galina Zaporojan, can be heard persuading an older, inebriated patient to take anti-TB drugs. At Speranta Terrei, we are dedicated to giving treatment support so that patients do not abandon treatment, no matter the other impediments in their lives. We thank our donors for making this possible.