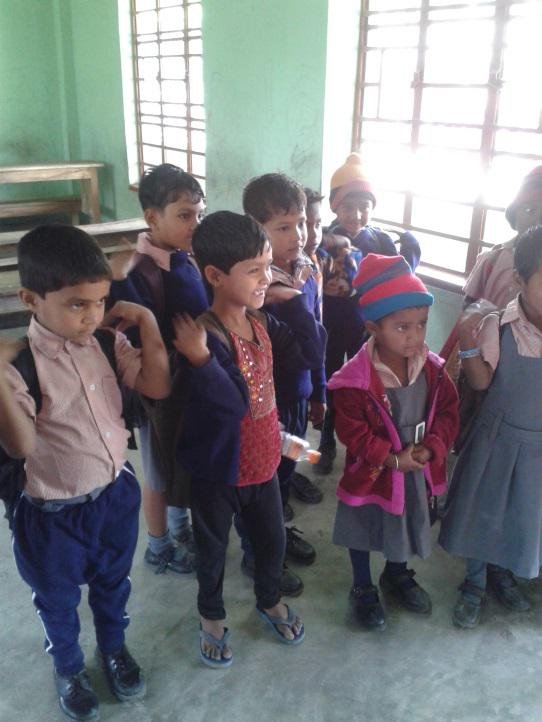 My 25 year old daughter accompanied me for the first time to the New Life Centre school in India in February. When we entered the kindergarten classes on the first day, she was bemused that some of the 3 and 4 year olds started to cry as soon as we appeared. ‘What’s wrong Mum’ she asked? ‘They haven’t seen many white people’ I replied, ‘and anyway they are all so young some of them haven’t got used to school yet at all’. The teachers confirmed that a couple of the children still cried each morning when their parents left. My daughter was perturbed until I remarked, ‘Just like you were’!

The little girl in the photo at the front with a hat on was one of those finding it hard to settle at school. She had a captivating face, large eyes that surveyed us suspiciously. This was at the end of a school day, and whilst we waited for some of the parents we sang ‘Heads, shoulders, knees and toes’.

All of the other children joined in as you can see and delighted in the song, but our little one remained serious and unsmiling. The more we tried to engage with her, the more she refused to be involved, and yet she couldn’t help herself from watching with interest as her schoolmates joined in.

I know that next time I visit, our wary little one will be amongst those eager to shake our hands in the morning as we arrive for school. I gain far more from my visits to this remarkable institution than I ever give. My life has been enriched by my contact with these children, who behave just like all other young ones, but because of this school they are well on their way to reaching their potential.

Wouldn’t you like to be enriched by helping this school?