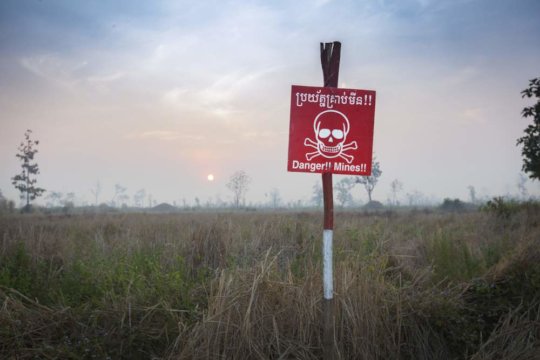 We're delighted to be able to provide you with your quarterly update for your adopted HeroRAT, Ratticus Finch.

In the months of April, May and June 2018, Ratticus Finch worked hard to clear a sizable 5820 square meters of land in just 839 minutes. Their sensitive nose and expert training led them to find 2 anti-personnel mines and 1 item of unexploded ordnance.

Ratticus Finch has already made a life-changing impact in Cambodia, a country with the highest ratio of mine amputees per capita in the world. During the Vietnam War, at least 26 million explosive sub-munitions were dropped on Cambodia, mostly in eastern and north-eastern areas. The bombing is estimated to have left upwards of 5 million cluster munition remnants and over 64 thousand landmine and other Explosive Remnants of War casualties have been recorded in Cambodia since 1979.

It's thanks to incredible supporters like you that we're able to continue our fight against landmines; deploying cost-efficient mine action solutions in affected countries whilst pushing forward our research and development in to innovative detection rats technology.

Through clicker/reward training, HeroRATs like Ratticus Finch are taught to scratch the earth above a landmine. During training, when a successful target is identified, our rats hear a 'click' and receive a reward. Ratticus Finch's training means he is able to identify items with an explosive scent making him faster and more efficient than a metal detector which also identifies scrap metal.

Every task requires a combination of assets from APOPO's comprehensive mine action tool box that includes a survey, metal detectors, and machines. It is however the Mine Detection Rats like Ratticus Finch that set us apart from other conventional methods.

You can find out more about our landmine detection process by clicking HERE. 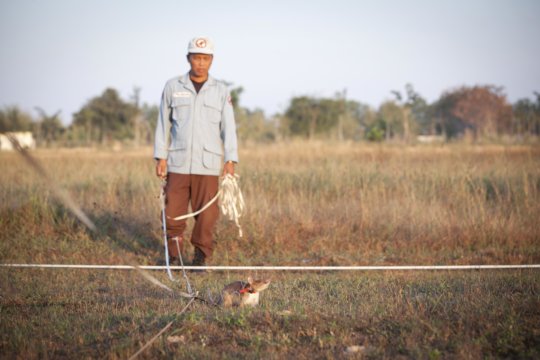 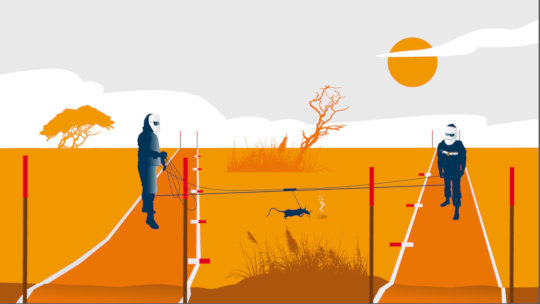 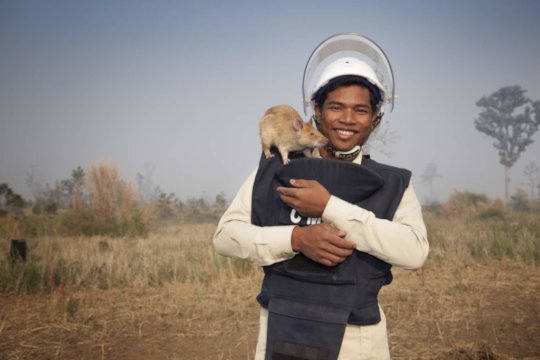 The Goldman Sachs Gives Rat in the field.

It's time for your HeroRAT update!The Goldman Sachs Gives rat continues to do well in the field with some great numbers for the first quarter of the year 2018. In the months of January to March your HeroRAT cleared a whopping 6745 square meters of land in 39 days. Working a total of 8335 minutes across the quarter.

In his down time, he received a HeroRAT health check by one of our specialist team members in addition to a favourite treat - banana!Thanks to the incredible work by your HeroRAT we were able to hand back more land to local communities. We're also able to continue to protect the lives of local inhabitants, people like Lann, a former soldier who lost part of his leg to an unexploded mine.---LANN'S STORY"I am Lann and I am a farmer at Khnar Phtuol, near Siem Reap. Twenty-five years ago I was a soldier defending our village against the Khmer Rouge. One day whilst on patrol I stood on a landmine that the Khmer Rouge had laid. I heard a loud crack and I fell over, then my comrades were shouting and screaming above me before I blacked out. I woke up in the hospital to find that I had lost my lower right leg. I was devastated.For some years I was recovering. Not just physically but mentally. To lose a leg is no easy thing, especially when you need to be strong and physical for a living. Worse, the landmines were still lying hidden around my home and the fields of the community. We were terrified.Eventually I met my wife and started a family, and they gave me something to work for. I learned better how to cope with only one leg, and a local charity gave me good crutches. I was able to farm well; I could plant rice, cut wood, and harvest the crops. But the landmines were still there, and my kids were growing up. They began helping with work, and playing in the fields. We knew the dangers but what could we do? We had to survive. Accidents happened. A child in our community lost an eye when he found an old bullet and began to polish it and it exploded. And we lost many of our precious cows and goats to landmines."Then we heard about an organization called The Cambodian Mine Action Center (CMAC) who were clearing away the landmines and slowly working their way towards us. We were so happy about this and couldn’t wait for them to arrive. To our surprise, they turned up with a team of rats that they said would help find the landmines for them so they could get the mines out of the ground and destroy them. They said they were called ‘HeroRats’ and they were trained by their partner APOPO. Those rats scuttled about, sniffing here and there, and then they would stop, smell the air, and then scratch the ground. That means they found a landmine! CMAC said that the rats were fast and had really speeded up their work. So together CMAC and APOPO had helped many communities. Less than two weeks later, our fields were free of landmines. Our kids were safe, our fields full of growing crops. We need to give all our thanks to CMAC, APOPO and those speedy HeroRATs!" ---Thank you for your incredible support for work and keep an eye out for future updates about your HeroRAT! 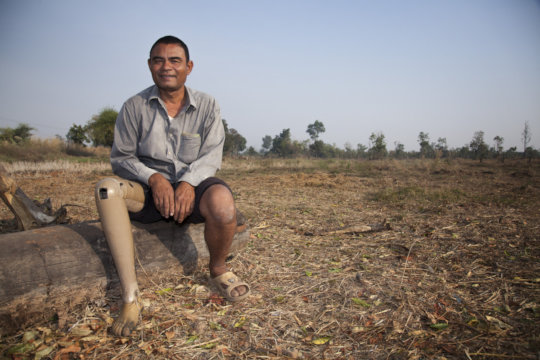 Lann lost his leg to a landmine. 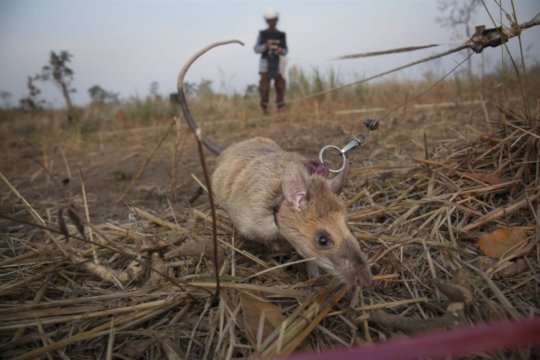 100% Match of your Mother's Day Donation! 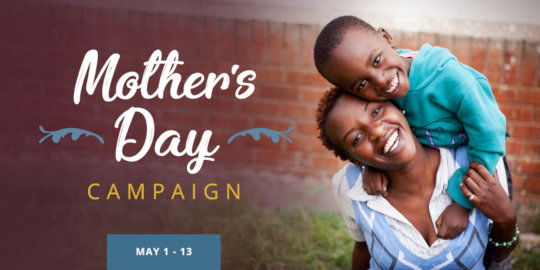 With Mother's Day fast approaching, why not send a donation in honor of your Mom?

From 1st to 13th May 2018, GlobalGiving will match 100% of all new, recurring donations received by APOPO.

The donations we receive go towards empowering mothers across the globe - mothers like Gloria who strive day in, day out to look after their families through incredible adversities and hardship.

Gloria is a widowed grandmother, smallholder, and head of her family. For years she struggled with having to farm land contaminated with unexploded landmines in order to provide food for her family. With APOPO's help, Gloria and her family are now able to farm a large area of land previously off-limits to them - they're able to farm safely, in the knowledge that they won't lose life or limb to a landmine. 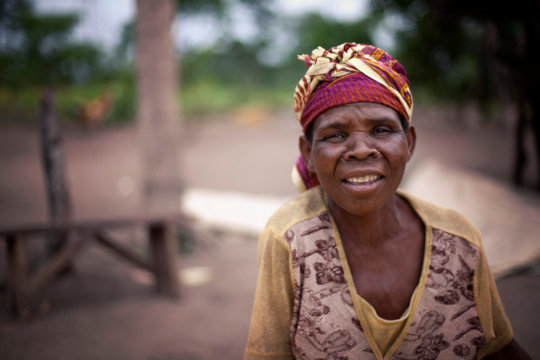 I am Gloria, a grandmother and smallholder. 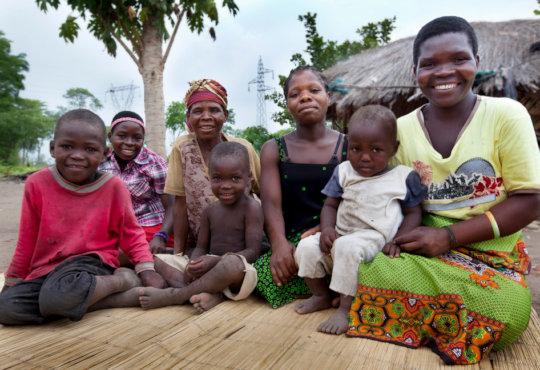 My family depends on crops for our livelihood. 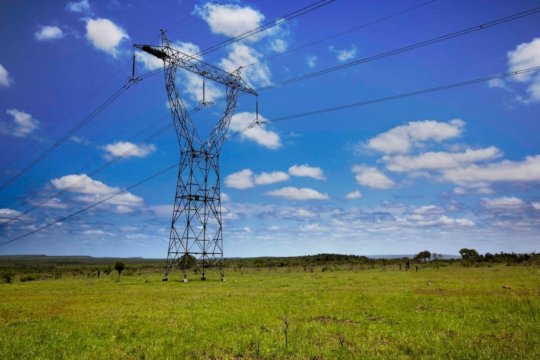 Power lines were mined during the war. 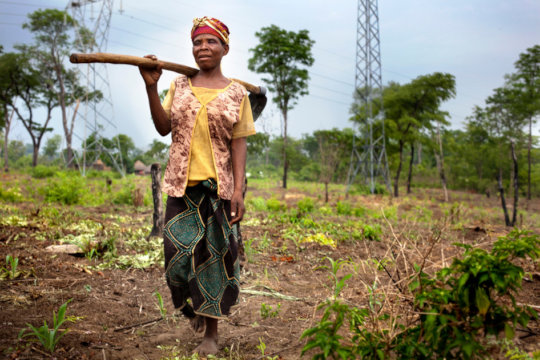 We had no choice but to farm dangerous land. 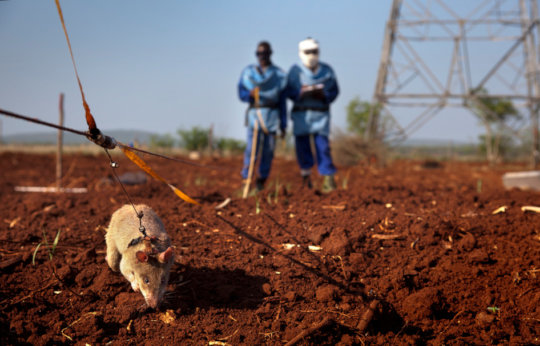 But then APOPO came and cleared the land. 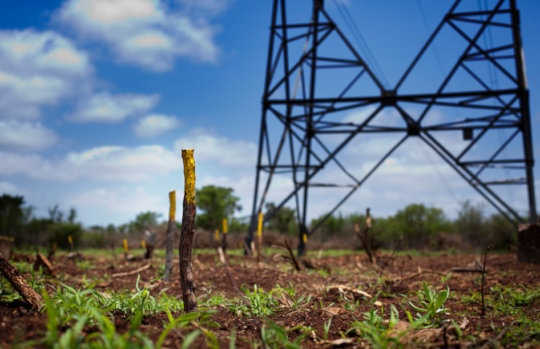 Each yellow stick shows where a mine was. 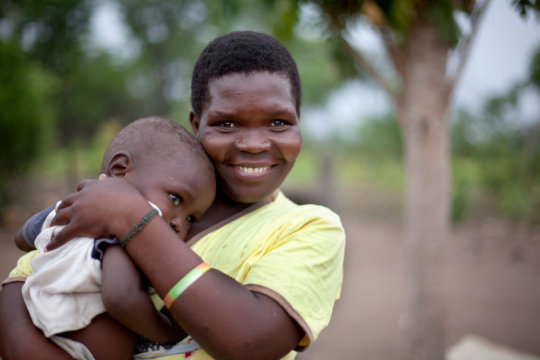 My daughter and her child are safe now.
‹ 1 ... 5 6 7 8 9 10 11 12 ... 39 ›
WARNING: Javascript is currently disabled or is not available in your browser. GlobalGiving makes extensive use of Javascript and will not function properly with Javascript disabled. Please enable Javascript and refresh this page.