HeroRATs for the Holidays! 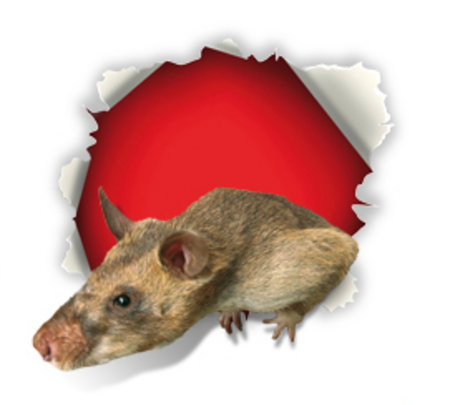 Looking for a unique and inspiring alternative gift this holiday season?

A contribution to our HeroRATs project on GlobalGiving will support us greatly in our efforts to save lives and limbs by sniffing out more landmines and tuberculosis in communities in need.

Make your contribution in honor of someone special, send them a GlobalGiving gift card, and see their face light up when they realize that together, you've helped provide banana treats for one of our life-saving, bomb-sniffing heroes in Mozambique, or tuberculosis screening for villagers in Tanzania.

Alternatively, you could surprise your friends or family with a HeroRAT adoption!

Here are three good reasons to adopt one of our heroes:

1.  It’s a fun, creative and unique gift, that has a lasting impact.

2.  Your lucky gift recipient will receive a certificate of adoption, an introductory letter from the chosen HeroRAT, and regular updates on their rat's progress!

3.  It's only 5 euros a month (roughly $7) - a small amount that will be a big help to us in our efforts to sniff out more landmines and curb the spread of tuberculosis.

Contributions we receive for the Adopt-a-Rat program go towards the training, vet check-ups, housing, food and loving-care our HeroRATs receive.  For more information on giving the gift of a HeroRAT, please visit the Adopt-a-rat page of our website, or click here to adopt a HeroRAT now.

Thank you for your wonderful support, and warmest wishes for peace and happiness this holiday season! 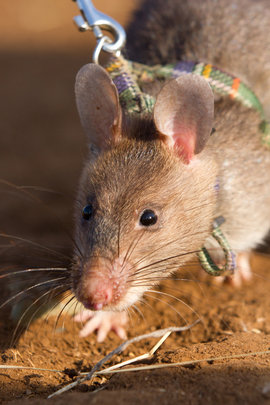 APOPO’s HeroRAT Mine Action Team passed an important milestone this month, in our efforts to rid Mozambique of its landmine legacy: over two million square meters of land have now been returned to the local population in Mozambique!  In opening this land, we have found over 1,030 landmines, helped bring electricity to communities, made traveling between villages safer, cleared access to water pits, allowed thousands of people to return to their land, prevented countless mine-related accidents, and much more!

None of this could have been possible without our dedicated supporters and funders.  We want to sincerely thank everyone who has believed in our unique and innovative approach to landmine clearance.

APOPO is thrilled to announce a seven-year cooperation with the Province of Antwerp, Belgium.  The Province has supported APOPO in our humanitarian efforts since 1999, and has now extended its financial support for seven more years to help with the further development and expansion of APOPO’s operations.

On November 11, APOPO and the HeroRATs were honored to welcome a delegation from the Province of Antwerp to Morogoro, Tanzania to mark the beginning of this cooperation.  The delegation included Mrs. Inga Verhaert and Mr. Ludo Helsen, Members of the Provincial Council, and Mr. Dieter Goossens, head of the department of North-South Cooperation.

While at HeroRAT headquarters, the delegation observed APOPO’s detection rats in training, and signed the official Protocol of Cooperation along with APOPO’s Chairman of the Board, Rudy Van Eysendeyk, and CEO, Christophe Cox.  By supporting APOPO, Mrs Inga Verhaert said the Province of Antwerp is both investing in scientific research for humanitarian purposes, while promoting local employment and training in Tanzania. She points out that "landmines and Tuberculosis (TB) affect the most vulnerable individuals and communities in the developing world.  They are major obstacles in social and economic development.  Therefore, the Province of Antwerp is happy to support this exceptional initiative, ensuring its expansion."

With the support of Antwerp, APOPO will have the capacity to continue to train both our HeroRATs  and Tanzanian trainers, as well as make it possible for the project to expand to Angola and the Democratic Republic of Congo in the future – two of the most mine-affected countries in Africa.

In November, news about our HeroRATs flooded media outlets all over the world!  This newfound interest came following a visit from a media crew from Agence France-Presse (AFP), a French news agency.  The team of video-journalist William Davies, reporter Otto Bakano, and photographer Yasuyoshi Chiba, were in Tanzania to cover the 2010 election in October – and couldn’t miss a side-trip to our headquarters in Morogoro to see our heroes in action!  They toured APOPO’s headquarters and training facilities, speaking with our HeroRAT trainers and staff, CEO Christophe Cox, and Founder, Bart Weetjens.

The stories hit the news circuits on November 7th and spread like wildfire!  Otto’s article, Sniffer 'hero rats' saving lives in minefields and lab quickly found itself published in various print and online news sources around the world.  On Yahoo! News videos, Will’s news story, Tanzania rats sniff out mines, was the most watched news piece and received over 200,000 views in only two days!  And a collection of Yasuyoshi’s beautiful photos of our heroes are featured in an online gallery on the website of The Telegraph (UK).

HeroRAT trainer, Abdullah Mchomvu, who has been with us since 2002, told Otto "This work is not easy...you have to be patient.  Sometimes I get frustrated, but then again I tell myself these are animals...[and] this work saves lives."  Bart Weetjens also spoke about the difficulties in promoting our work in an anti-rodent society. "Rats absolutely have an image problem.  People don't like them and that is one of our biggest struggles… we are trying to change that perception.  Rats are very sociable, very intelligent highly-likeable creatures."

It appears that the recent media attention has helped change a few people’s opinions about rats!  In the two weeks following the publication of these stories, we were overwhelmed with support and welcomed over 100 new HeroRAT adopters from all over the globe.  We are thrilled that the stories about our HeroRATs moved so many people to help our cause.  APOPO would like to send a hero-sized thank you to the AFP crew, for helping us to spread the word about the great work our HeroRATs are doing to help save lives and limbs!

Thank you all for your kind support of our heroes.  We wish everyone a very safe & happy lead-up to the festive season! 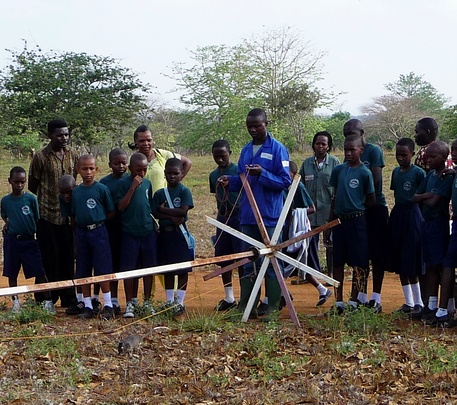 A HeroRAT shows off his skills to school kids

Latest results from the field and TB lab

It has been a productive year for APOPO’s HeroRAT teams so far.  Our Mine Action team in Mozambique continues to reduce the impact of landmines in the Gaza Province.  Since the start of our operations, we have helped to return 1,951,917 square meters of land to the population in Mozambique!  In 2010 alone, our HeroRAT team has found 817 mines, 350 unexploded ordnance, and 6,216 small arms and ammunitions.
At our Tuberculosis (TB) detection center in September, our HeroRAT team discovered a total of 69 TB-positive patients, bringing our total to over 1,500 patients that were previously missed by microscopy at local hospitals. In a country where about half of all active TB cases go undetected, these findings make a huge difference in reducing the spread of this deadly disease. For every patient with active TB that our HeroRATs help diagnose, we help prevent an additional 10-15 people from contracting it annually!
We are extremely proud of both of our HeroRAT teams in Mozambique and Tanzania for their life saving contributions to the communities we serve.  Keep up the great work!
Heading off to Mozambique
In the next few weeks, one of our experienced Tanzanian trainers, Shafii, will embark on his first humanitarian demining assignment to the Gaza Provincein Mozambique.  While there, he will be working with our HeroRATs, including some of those he trained from socialization right through to their internal accreditation in Tanzania.  He will also be exchanging some valuable skills with his colleagues in our Mozambique Mine Action team.
Before Shafii can enter the real minefield as an official humanitarian deminer, he will first need to pass an accreditation test with the National Institute of Demining (IND) in Mozambique.  Although Shafii went to Mozambique in 2006 with APOPO, he was primarily involved with training and did not get to experience working with the HeroRATs in the minefields.
This time around, he is very excited for the chance to put all his hard work training mine detection HeroRATs into practice!  “I want to go to Mozambique so that I can get an experience in the real landmine field…in the real landmine field, I will be a full trainer.”  For our Tanzanian staff, this is an incredible opportunity to see first-hand how important their everyday work at our training base is and the benefits it brings to mine-affected areas.
In order to prepare himself for the challenges ahead, Shafii has been trying to learn a bit of Portuguese, the language spoken in Mozambique, as well as talking with other trainers who have recently returned from six months working in our Mine Action Program.
Shafii will not be making the journey alone.  He will be traveling with eight new HeroRAT graduates including his very own rat, Santola.  The new recruits will also have to pass an accreditation test in Mozambique, in order to be recognized as official MDRs (Mine Detection Rats).
Shafii enjoys working with the rats and is looking forward to seeing them in action. “I am trusting the rats.  I believe they are doing a good job.”
We wish Shafii and his eight furry colleagues a safe journey!
Back to school at HeroRAT Headquarters
We are proud to announce APOPO is now offering free English language classes to our staff at our Tanzanian headquarters for those interested in learning a new language or brushing up on old skills. A basic knowledge of the English language is essential for our trainers who are deployed to mine action programs abroad, as it helps makes the transition into a new country easier where the native language is not Swahili.
The English language program has been set up by our Communications Coordinator, Felicia Byrne, who prepared an optional placement test to separate the staff into three levels: Beginners, Intermediate and Advanced. With the help of a local language teacher, Fred Chiwanga, the three classes have now been running for one month and cover a range of topics such as pronunciation, conversation skills, reading, and grammar.
So far, the response has been very positive with some of our staff choosing to attend two classes in one day! It has been wonderful to see the staff's excitement and enthusiasm for learning. We look forward to watching (and hearing!) their skills develop over the coming months.

The holidays are on their way!
Don't forget!  The holidays are just around the corner.  Our HeroRATs make great presents through our Adopt-A-Rat program.  For more information please go here.
As always, many thanks for your continued support of APOPO and our HeroRATs!
Warm regards,
The HeroRATs Team
www.herorat.org
herorats@herorat.org
http://www.facebook.com/heroRAT
http://twitter.com/HeroRATS

‹ 1 ... 30 31 32 33 34 35 36 37 ... 39 ›
WARNING: Javascript is currently disabled or is not available in your browser. GlobalGiving makes extensive use of Javascript and will not function properly with Javascript disabled. Please enable Javascript and refresh this page.