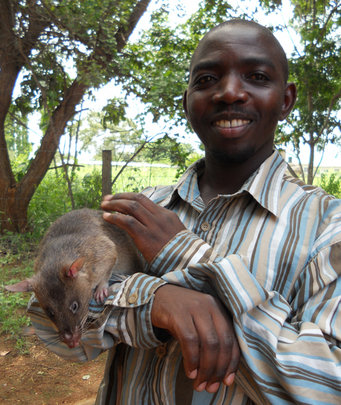 Haruni with his HeroRAT

As always, thank you very much for your continued support and interest in our life-saving work!

For more information about APOPO and our HeroRATs, please go to our websites, http://www.apopo.org and http://www.herorat.org, or feel free to contact us at our email address below. 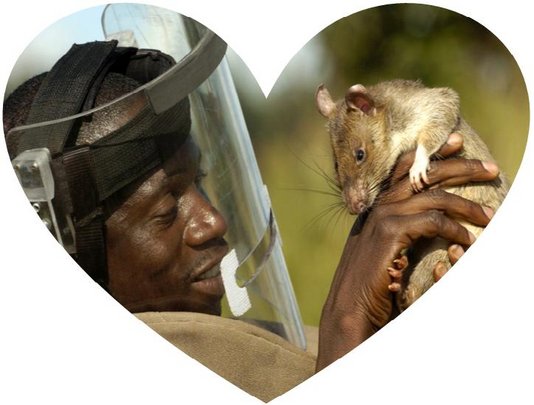 Love between a HeroRAT and trainer

A Hero-Sized WELCOME and THANK YOU

The HeroRAT team warmly welcomes all of our new found friends and supporters who came on-board throughout 2010.  We are lucky to have an ever-expanding community of amazing individuals who are as committed and passionate as we are about the life-saving work of our HeroRATs.

We are most grateful to those of you who continue to share our work with your friends, family or colleagues – you are helping us to change people’s somewhat negative perceptions of rats!  If you haven’t already joined the HeroRAT network, feel free to connect with us via Facebook and Twitter to ask questions, see the latest images from HeroRAT headquarters, and keep up to date with all the latest hero happenings.

We also want to extend a very special thank you to all of our wonderful supporters who made this holiday season the best one in APOPO’s history!  Our HeroRATs were quite the popular gift this year, with 436 new adoptions throughout the month of December.  Not to worry, we have spoken with Chosen One, Kim, Tyson, and Ziko, and they are all up to the challenge of making their adoptive parents proud!

Thanks to our record number of generous donors and adopters over the holidays, it looks as though 2011 is going to be a massive year for APOPO’s HeroRATs!

APOPO is setting our sights high with some big goals for our HeroRAT teams in 2011.

In Mozambique, thanks to ongoing support from generous donors around the world, we will continue to stay on track to complete our de-mining operations in the Gaza Province ahead of the 2014 deadline.

APOPO continues its effort to establish mine action programmes in Angola and Thailand.  Angola is one of the most mine-affected countries in the world and we aim to work with a potential partner organization and to send HeroRAT teams to the Moxico province in 2011. This province is the most mine-affected province in Angola.  In Thailand, APOPO has started preparations for a non-technical survey of two mine-affected provinces along the Cambodian border.  The project is undertaken in close cooperation with Thailand Mine Action Centre (TMAC). The survey will provide a more realistic picture of the real mine problem and will help to focus future mine action efforts in areas that are actually mined while returning areas that prove mine free to the local population.  The two expansions into Angola and Thailand are, however, subject to available funding.

In addition to the daily sniffing activities of our Tuberculosis (TB) detection HeroRAT team in Tanzania, we will also be busy preparing our case findings for future publication in 2011. New research experiments have already begun, with the aim of further validating and optimizing our HeroRATs as a diagnostic method.  In one experiment, our HeroRATs have been sniffing prepared microscope slides of sputum samples – rather than the sample pots we receive initially from collaborating DOTS Centers – and so far, the results are encouraging.

Our Remote Scent Tracing (RST) research will be taking on groundbreaking new applications in 2011.  RST involves taking a sample of air, soil, or other compound, and bringing it to a remote location for evaluation by our trained sniffer rats.  Pending funding, APOPO hopes to begin feasibility studies on the rats’ abilities to detect multiple explosives and salmonella as soon as possible.

APOPO’s most recent tuberculosis journal article, led by Dr. Alan Poling entitled “Using Giant African Pouched Rats to Detect Tuberculosis in Human Sputum Samples: 2009 Findings” was published in the December edition of the American Journal of Tropical Medicine and Hygiene. The study presents our results from 2009 using our Gambian pouched rats (affectionately known as HeroRATs) to sniff for mycobacterium tuberculosis in human sputum samples.  That year, out of 10,523 total patients, our rats found an additional 620 TB-positive patients that were previously misdiagnosed as ‘TB-negative’ by the local DOTS centers using smear microscopy.  Thanks to our rats’ identification of these additional patients, the study found that our rats truly are heroes, having increased detection rates in our partnering DOTS centers by 44% in 2009.

Karen Hopkin also presents a summary of the results from this study in her 60-Second Science podcast on the Scientific American website.  Click here to listen!

To date, including data from 2010, APOPO’s HeroRATs have found over 1,600 TB-positive patients that initial smear microscopy missed.  According to estimates from the World Health Organization, this has helped prevent the spread of TB to over 16,000 healthy people.

We look forward to future success and publications about the great achievements of our Tuberculosis detection HeroRATs and their equally hard-working human colleagues.

APOPO’s research in New York Times and on the radio

This month, APOPO appeared for a third time in the widely distributed New York Times newspaper. APOPO’s Behavioral Researcher, Dr. Alan Poling, was interviewed for the January 3rd article, “Detecting Tuberculosis: No Microscopes, Just Rats”.  The article reported on APOPO’s findings from the above-mentioned study, led by Dr. Poling, which were published in the December issue of the American Journal of Tropical Medicine and Hygiene.

In the article, Dr. Poling expressed one of our hopes for the future. “We think that eventually there will be a place for them in first-line screening.”  Currently, our TB-detection HeroRATs provide second-line screening: they evaluate the sputum samples after they have been checked under microscopy at the hospitals.  However, our rats find 5 – 10 patients on a weekly basis who have been missed by first-round screening.  We believe our furry colleagues are up to the challenge of proving their TB-sniffing capabilities, and hope that HeroRATs will someday become a go-to resource for efficient and effective TB diagnosis.

Dr. Poling was also interviewed by WMUK, a public radio program in Michigan, USA, to talk about APOPO and our HeroRATs.  In the seven-minute news segment, Dr. Poling discussed the landmine and tuberculosis problems in sub-Saharan Africa and how APOPO trains our HeroRATs to help solve these problems. To listen to Dr. Poling’s interview, please click here.

Say “I Love You” with a HeroRAT!

Tired of giving chocolates and roses for Valentine’s Day?  Shake things up this year and show your love by making the world a safer place for your loved one to live in: support a HeroRAT!

A contribution to our HeroRATs project on GlobalGiving will support us greatly in our efforts to save lives and limbs by sniffing out more landmines and tuberculosis in communities in need.

Make your contribution in honor of your Valentine and send them a GlobalGiving gift card.  Watch as their face light up when they realize that together, you've helped provide banana treats for one of our life-saving, bomb-sniffing heroes in Mozambique, or tuberculosis screening for villagers in Tanzania.

Alternatively, you could surprise your Valentine with a HeroRAT adoption!

Our HeroRATs are more adorable than any teddy bear, they live longer than roses, AND they are helping to save lives and limbs in Tanzania and Mozambique.

Your loved one will receive a personalized email announcing the gift from you, along with an adoption certificate and letter from his/her adopted hero as well as updates throughout the year.  To give the most unexpected and unique gift this Valentine’s Day, please visit our Adopt-A-Rat page.

Thanks for your support, and we wish all of you an inspiring and rewarding year ahead! 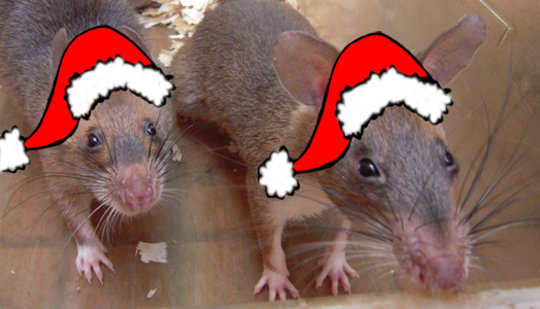 Holiday greetings from the HeroRAT team!

On behalf of all of us at HeroRAT headquarters, we wanted to extend a huge hero-sized thanks to you for following our life-saving work throughout 2010.  We’re so grateful for your ongoing support and appreciation for our heroes.

It has been a productive year, and our HeroRATs are becoming more known for their sniffing abilities all over the world.  Here are a few highlights from some of the places we’ve appeared throughout the year:

The HeroRAT landmine-detection training program is constantly being refined to get our rats hero-ready even faster at our Center of Excellence in Tanzania.  In total, we currently have 195 rats in various stages of landmine detection training or accreditation procedures.

Our Mozambique Mine Action team has made a huge impact in land clearance this year – with over 792,893 square meters of land returned to the local population!  In doing so, the HeroRAT team has found 860 landmines, 374 unexploded ordinance and 6,216 small arms and ammunitions.  That’s a lot of TNT!  Not only have countless landmine-related accidents been avoided, but barriers restricting development in affected communities have been lifted, and people are free to move about their land without fear.

In Tanzania, our HeroRAT team at the Tuberculosis (TB) detection center has been busy sniffing away to save lives.  In 2010, our TB-detection heroes have so far discovered over 594 TB-positive patients who were initially missed by traditional diagnostic methods.  As a result of these tireless efforts, more patients can begin their life-saving treatment sooner, thus significantly reducing the spread of TB.  In fact, using projections from the World Health Organization, we have helped to prevent at least 5,940 new cases of TB this year alone!

On a lighter note, our breeding couples have thoroughly enjoyed the improvements that were made to our HeroRAT breeding program earlier this year.  They have shown their appreciation by increasing the number of births this year to 148 baby rats – our future heroes!

We are working on expanding our mine action work into Angola and the Democratic Republic of Congo in Africa, as well as embarking on a new continent – Asia – for initial landmine survey work along the Thai-Cambodian border.  Initial visits by members of the APOPO team have already taken place, in preparation for setting up and getting started in these new countries.

Our Remote Scent Tracing research program will also expand next year to look at other scent detection possibilities.  Our research and development team has a number of new proposals in the pipeline for the many potential applications of this work.  We’ll keep you posted along the way as plans for future applications continue to be developed and refined.

Our Adopt-a-Rat Program has seen a great deal of support this year, with more and more of you taking action to help us save lives and limbs in communities in need!

Don’t forget: our deadline for Holiday Gift Adoptions is 18 December, simply to guarantee delivery of your gift recipient’s HeroRAT adoption materials before 25 December.  Of course you are most welcome to adopt one of our HeroRATs anytime after the 18 December, and we’ll send your adoption materials as soon as we can!  Please visit our Adopt-a-Rat webpage for more details, or email the HeroRAT team at herorats@herorat.org.

Thank you so much to all of you who have contributed to our cause throughout 2010: we feel truly honored to have such a warm-hearted and dedicated group of supporters.

On behalf of APOPO and the HeroRATs, we send you warmest wishes for a safe, happy and peaceful holidays, and a wonderful start to the coming year!

‹ 1 ... 29 30 31 32 33 34 35 36 ... 39 ›
WARNING: Javascript is currently disabled or is not available in your browser. GlobalGiving makes extensive use of Javascript and will not function properly with Javascript disabled. Please enable Javascript and refresh this page.