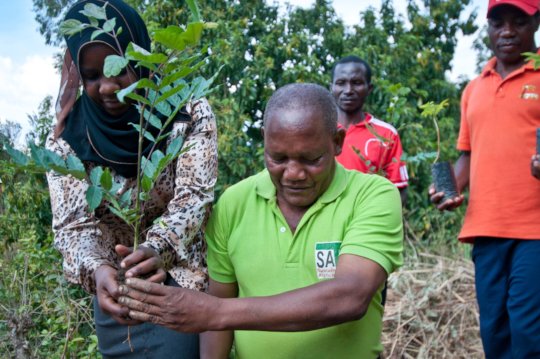 To become carbon neutral, Apopo needs to sequestrate carbon equal to 2000 planted trees a year. Sustainable Agriculture Tanzania (SAT), in partnership with APOPO, developed a programme which empowers farmers to develop their own food forests.

It’s design guarantees that each involved farmer chooses a minimum of 5 tree species which will be later planted on his or her plot. All farmers are trained in tree nursery establishment and all planted trees are from their own prepared nurseries.

Every year, one new group of farmers will enter the project and start planting trees. It is forecasted that a farmer will plant an average of 100 trees.

The forests of the Uluguru Mountains are of critical importance to indigenous village communities, the cities of Morogoro and Dar es Salaam, and the survival of plants and animals found nowhere else in the world. Furthermore, the project area is of vital importance to for Morogoro city's water supply.

On behalf of the communities involved, please keep supporting this vital work. 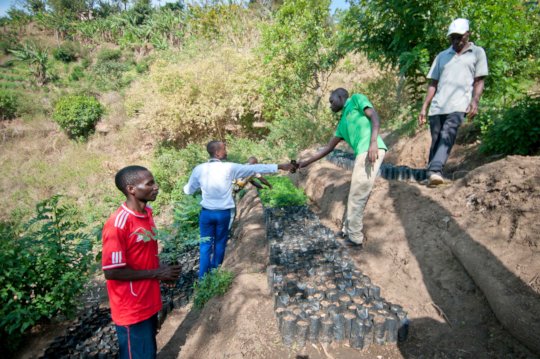 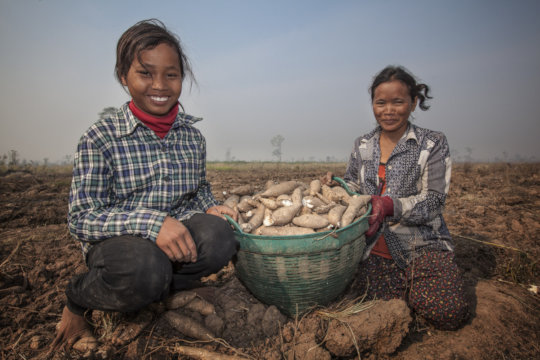 Loun and her daughter

2017 marked two decades since the Mine Ban Treaty (Ottawa Treaty) was adopted and signed by 122 countries in Ottawa, Canada. The treaty, which bans the use, production and storing of landmines, now lists 163 countries as signatories, whose representatives have come together to assess the current situation, discuss challenges and confirm commitments for a mine-free world by 2025.

Over 40 million landmines have been destroyed by state parties signed to the treaty, and 143 of them no longer hold a stockpile. This represents an outstanding rate of compliance. Most importantly, the number of new mine victims has fallen.

“After 20 years, the Ottawa Treaty has significantly driven the clearance and destructions of millions of landmines all over the world as well as raised awareness of the plight of people still living in terror due to these insidious weapons.” - Håvard Bach, Head of APOPO Mine Action.

The international mine action community has set a target to make the world free of landmines by the year 2025 and much work needs to be done in order to achieve this goal. People living in countries from Angola to Cambodia and Zimbabwe, do so in daily fear from these savage remnants of conflicts that ended decades ago.

Loun has been farming the land with her daughter out of desperation, despite the fear.

"I’ve worked on this land for the last 3 years and I always worried that landmines lay hidden here – there have been so many accidents nearby. But I had no choice, I had to feed my family and send my daughter to school. She works with me sometimes on weekends for extra pocket money.

Last month, APOPO and their partner the Cambodian Mine Action Center (CMAC), arrived to search the fields for old explosives. They bought with them some rats that they said could find the landmines, and we laughed. But why not, as long as they worked? And they did! They ran right up to where they thought a landmine was buried and they scratched on the ground. When the men with the metal detector came and checked, there really were landmines or something else like an old bullet.

We have watched CMAC, APOPO and these rats make their way up into all the fields around us and they work very fast. In our fields they found six landmines in total, one was where I have worked many times. I am so sorry that I put my own daughter at risk, I can’t forgive myself. But now we can continue to work without fear. At least that is some comfort."

APOPO’s mine detection rats are an effective technology that is proven to speed up mine action when integrated into existing methods. With a spirit of partnership, APOPO calls on other operators to come and discuss how we can integrate with their technology and methodology.

Together, we can rid some of the world’s most affected countries of landmines. 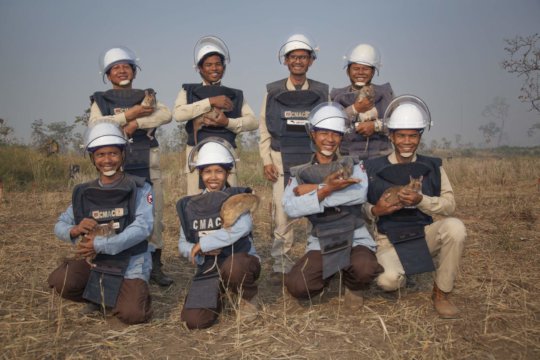 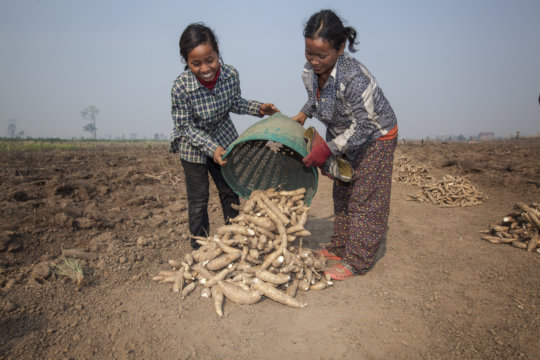 Free to work the land 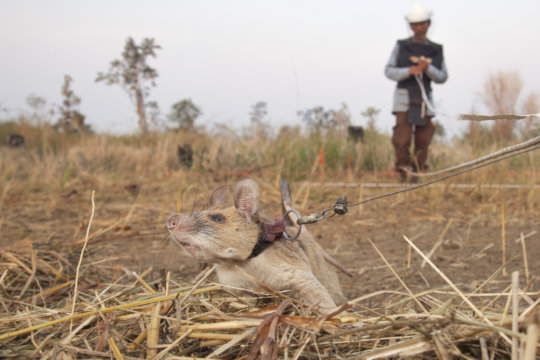 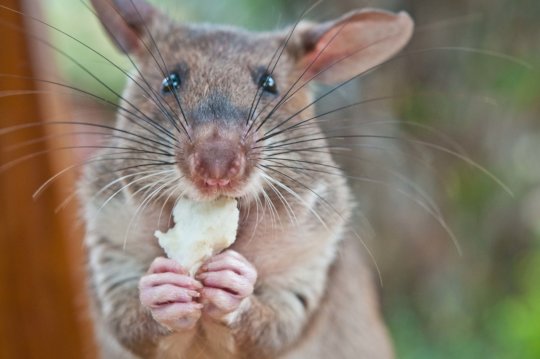 From APOPO’s humble beginnings to our present day status as a global organization, APOPO is proud to celebrate 20 years of detecting two of the deadliest threats on the planet: landmines and tuberculosis.

The HeroRATs have helped clear over 106,000 landmines, identified over 12,000 TB-Positive patients who were missed by their clinics, and prevented almost 90,000 potential infections of tuberculosis – the world’s biggest infectious disease killer.

Where it all began

20 years ago Bart Weetjens, a product design ex-student from Antwerp University in Belgium, called his friend Christophe Cox and Mic Billet to tell them about an idea he’d had about training rats to find landmines, freeing nearby communities from terror and hardship. The project was presented to the Belgian Government who provided a feasibility grant in November 1997 and the APOPO project was born. APOPO and the HeroRATs have since been saving lives all over the world.

Harnessing the highly attuned sense of smell in the African giant pouched rat, APOPO has spent the last two decades training these affectionate rodents in detecting two of the deadliest threats on the planet: landmines and tuberculosis. Each gives off its own unique smell, undetectable to humans, something which the rats are able to quickly sniff out.

“This is a case where mother nature has built a detection system that, coupled with modern technology, can save lives in places where cost-effective and efficient tools aren’t readily accessible,”says Bart Weetjens, founder of APOPO. “There’s a powerful and life-saving alert system in the little noses of these rats. Even after 20 years of working with them, I’m still in awe of what they can do.”

Twenty years later, APOPO has now faced the landmine issue in seven countries, including Cambodia, Angola and, notably, Mozambique, where it played a key role in the country achieving ‘mine-free’ status in 2015.

APOPO is now looking at opportunities to eliminate landmines in former FARC territories in Colombia, where minimal-metal mines aren’t easily detected by metal detectors, and in the Great Limpopo Transfrontier Park in Zimbabwe, where APOPO expects to soon begin work detecting mines along important migration routes for elephants, buffalo, lions and other protected wildlife. In addition, APOPO’s TB-detection programs are expanding in Tanzania and Mozambique and will soon be operational in Ethiopia. APOPO is also exploring using rats for search and rescue operations, particularly in collapsed buildings, and even in sniffing out brain disease.

Twenty years after the Ottawa landmine treaty was signed, there is still work to be done. To this day, 58 countries are still plagued by as many as 110 million landmines buried in the ground. However, global financial support for mine clearance is declining, necessitating a faster way to find the landmines. APOPO’s goal is to become the go-to resource in accelerating the pace of landmine clearance as the world races to accomplish the Ottawa Treaty target of eliminating all landmines by 2025. In order to do this, APOPO’s HeroRATs could be the key to speeding up the decades long process.

Saving Lives Thanks to YOU

Thank you to our amazing donors. Whether you have been with us since the beginning, or are new to our community, we are proud to call you our supporter. 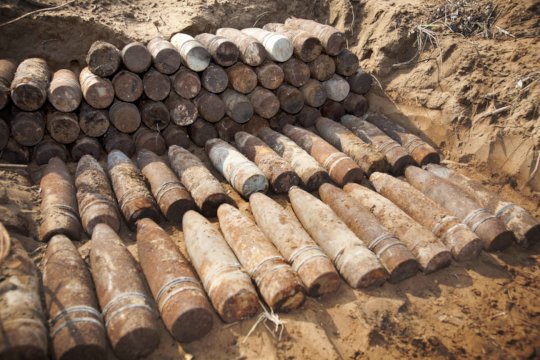 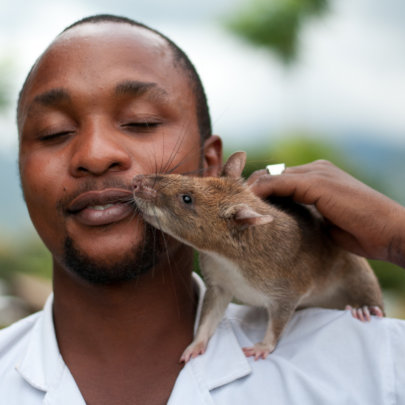 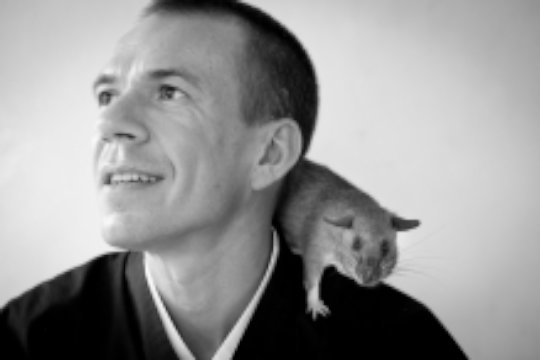 ‹ 1 ... 8 9 10 11 12 13 14 15 ... 39 ›
WARNING: Javascript is currently disabled or is not available in your browser. GlobalGiving makes extensive use of Javascript and will not function properly with Javascript disabled. Please enable Javascript and refresh this page.