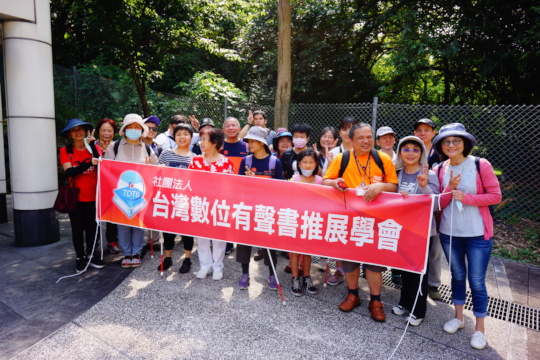 "It was the best of times. It was the worst of times." It was the worst of times. During this period, the world experienced the new crown epidemic (COVID-19). The cities were closed and borders closed, and the economy was also greatly affected. As of 5/23/2020, more than 5.3 million people have been infected globally and more than 340,000 have died. Such an era can be called the worst era? However, the more difficult the environment, the more witness to the noble side of mankind. Many countries in the world have cast aside their past differences, faced the epidemic situation together, and worked together to find solutions. NPO also does not give up its responsibility, continue to provide services. The Audiobook Society holds this attitude. Even if the donation is reduced, we cannot interrupt our services and we cannot give up our purpose. I hope that the epidemic will gradually slow down and let everyone gradually return to normal life. Share with you the hard work of TDTB this season

To let more visually impaired students and special education teachers know TDTB's service resources, the National Open University specially invited TDTB to the Education Radio Station for an exclusive interview. The host said after the visit that the TDTB service is not unique but also very helpful to the visually impaired students. She hopes that TDTB will be able to accept the interview in the future, which gives us great encouragement.

TDTB's new online radio program takes a book “Blindness: What it is, What it does and How to live with it” as the main axis, and adopts the way of a book club to invite guests such as psychological counselors, social workers, and computer lecturers to discuss together various losses of visually impaired people. This program will be broadcast on Podcast and Youtube channels at 5 pm every Thursday. Welcome to join us and to share your opinions.

NPO is a group of people who are enthusiastic about public welfare. The purpose is to combine the power of the public and provide services to people in need. To improve the quality of service, TDTB specially introduced a member management system (CRM) to manage the data of members, service cases, donors and volunteers most efficiently, and also added an online donation system to allow donors to easily use the online function of credit card achieves the situation of mutual benefit and win-win between the donor and the association.

TDTB has trained many visually impaired people to become computer lecturers for many years, bet a lot of effort on the training of information aids for visually impaired people, and also cultivated many cases of a successful return to work. To commend the achievements of these teachers, TDTB specially convened an extraordinary meeting of supervisors and rigorous recruitment, and finally selected a computer teacher to participate in the selection of the Government Golden Eagle Award.

Even if the epidemic continues to heat up, TDTB continues to provide services without interruption and regularly launches volunteer training courses every month. To avoid group infections, Online teaching is used in particular, so that volunteers can learn the majors related to visually impaired services, laying the foundation for future volunteer services.

Returning to the workplace for the visually impaired has been one of the priorities of TDTB's efforts, and has recently made some breakthroughs. After the selection of personnel, a meeting was held to evaluate, and the final selected students began to take classes in March. This vocational training 2.0 course adopts individualized design and implements training according to the needs of individual cases. It also matches related industries and conducts a simulation

interview to increase students' psychological and practical preparation before employment. There is already a successful case, which particularly lets us feel exciting.

In this sharing session, a social worker of the Keelung City ()Government, was invited as the keynote speaker. He was a patient with albinism since he was born. Due to his special appearance, he was discriminated, bullied, stumbled all the way, and because of visual inconvenience. Lack of self-confidence, can not find the meaning of life. Today, he is a helping worker engaged in social work, serving more people with his major and enthusiasm. TDTB specially invited him to share his story with his visually impaired friends, and encourage him to go his own way. 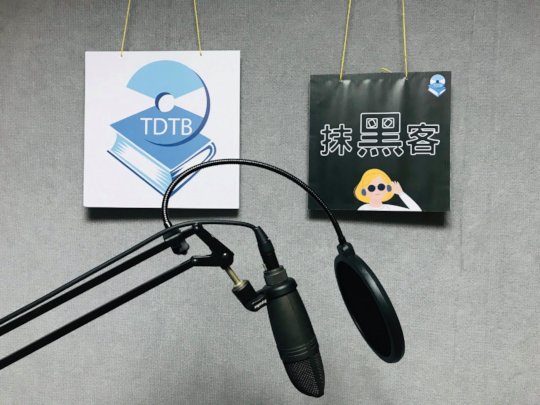 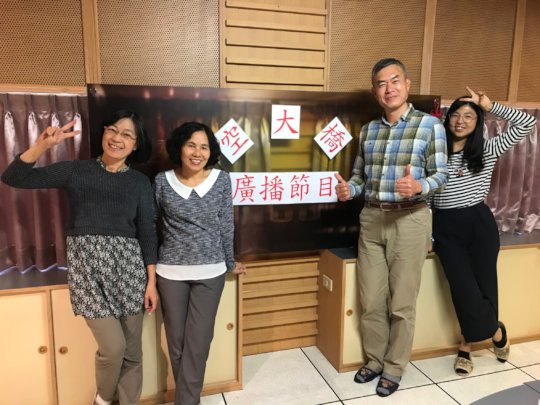 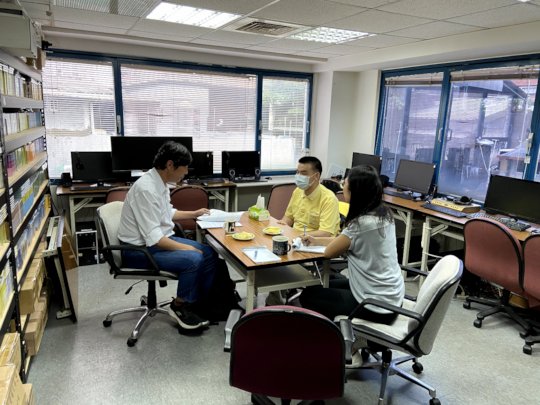 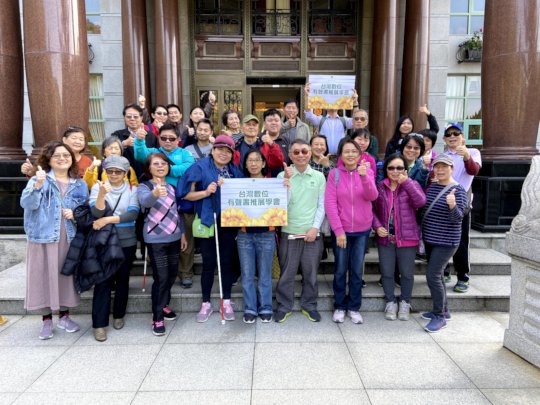 With the beginning of 2020, TDTB has not let its footsteps pause. Although the climate in Spring is endless, and COVID-19 has caused global panic, TDTB still maintains a consistent and steady pace, and actively launches a series of activities to provide services for the visually impaired. Not interrupted by external influences. This year, TDTB also began to promote new-type programs. Through the links of local NPO and Corporate visits, we hope that more people can support us through understanding and make TDTB's visually impaired services better through your support. In the week of March 23-27, GlobalGiving held a Little by Little Campaign event. As long as you donate a small amount to this project (below $ 50), GlobalGiving will provide a relative amount of 50%, greatly improving your benefits of donations are welcome.

The traditional Chinese Lunar New Year holiday has just ended, and TDTB has been busy and fulfilling for a year, starting with the board meeting. The Board members are made up of a group of friends who are enthusiastic about visually impaired services and those who have received the services of TDTB in the past. During the meeting, we discussed and established a consensus on the development priorities and future goals of this year. Through the meeting, provided a good starting point for this year's service.

In order to expand the promotion of visually impaired services, TDTB has added new online radio programs since January this year. It is based on the book “Blindness: What it is, What it does and How to live with it” by Fr. Thomas J. Carroll. In the chapter, different guests are invited to discuss the loss and rehabilitation of the visually impaired. The program is launched on the Podcast every Thursday and is also broadcast on the Youtube channel, reaching more audiences who want to know about visually impaired services through the power of the internet.

To increase the local connection and expand the contact surface of the service object through contact with the relevant organization,  visited the , an NPO serviced for a nomad, and a group of 36 local NPOs in Mar.18).  besides, to expand our contact with relevant NPOs and enterprises, it was on Feb.5 and Feb.19 ITRI. Let services go out through visits and links.

To serve more visually impaired people, we cooperate with National Open University (NOU) to produce an e-book of the school's publications and place it in the DAISY library of TDTB for students with visual impairment at the school to borrow and study online. Through this cooperation, TDTB has also increased the number of services for students with visual impairment. The ceremony of the cooperation agreement was signed on March 11th at NOU and was signed by the president of the university, Dr. Chen Songbai, and the chairman of TDTB, Dr. Wang Janli. The two parties started a new service milestone. 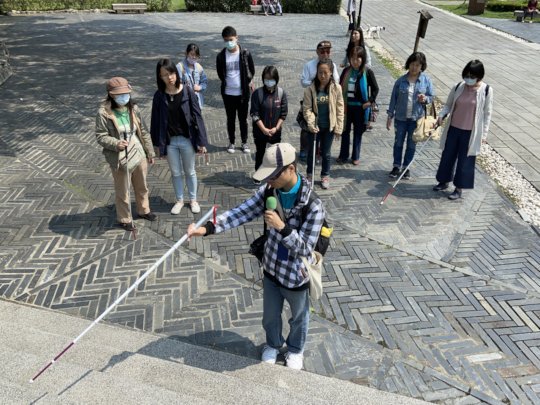 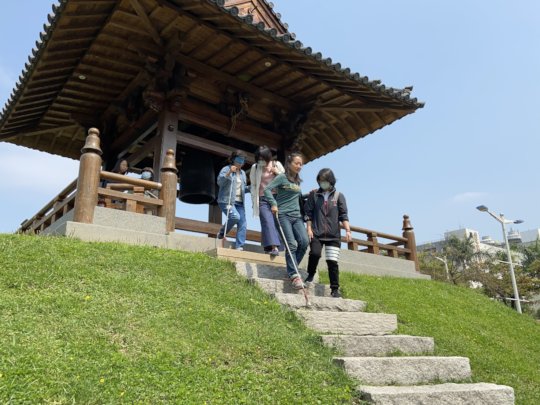 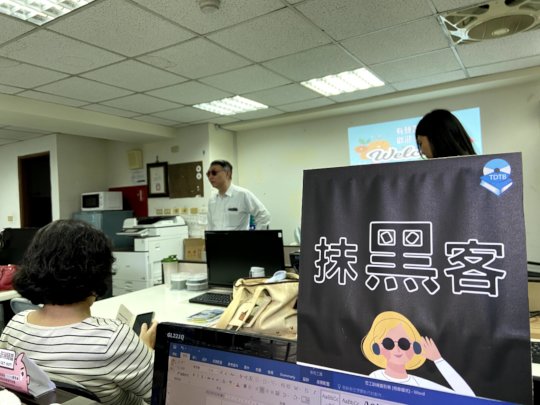 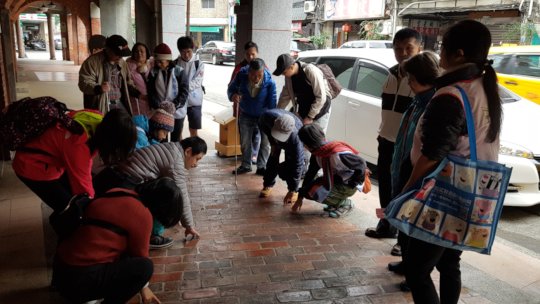 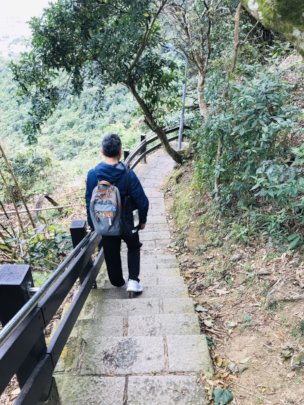 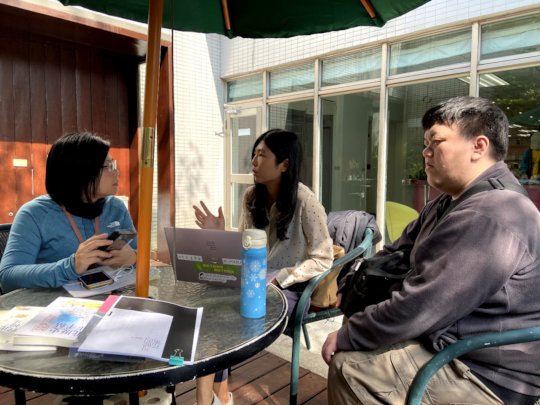 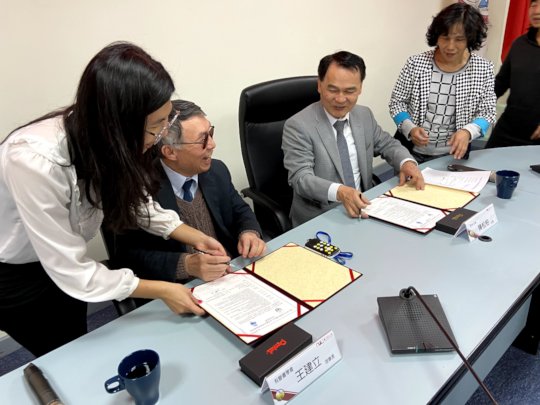 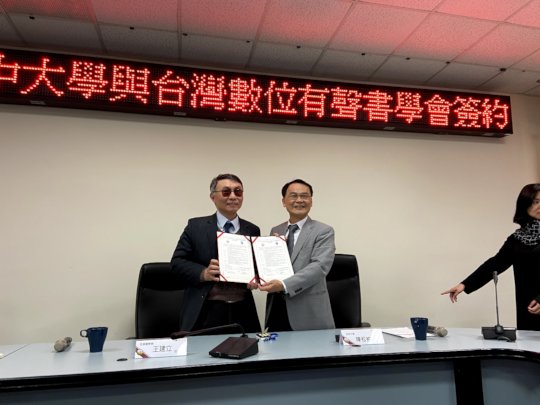 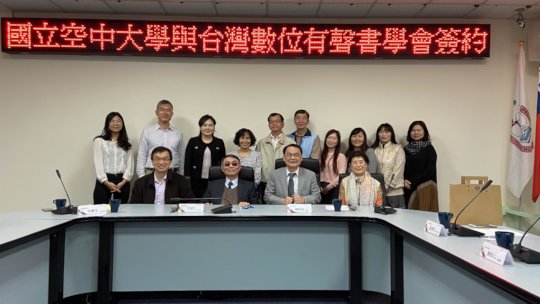 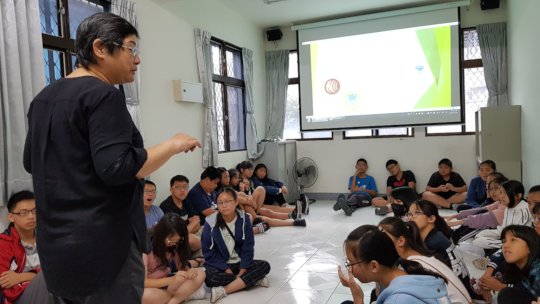 With the weather turning chilly and the temperature dropping, 2019 is coming to an end. TDTB would like to thank you for your support that has propelled us throughout the year, empowering us with warmth and motivation to assist visually impaired.

In this year, TDTB has strived to provide visually impaired with technology-related services and programs to ensure their accessibility to information. Backed by a strong and capable group of teachers and trainers, we have held one-on-one and group courses to teach the visually impaired to use NVDA screen reader and Microsoft Office Suites and services while offering distance education on our Visually Impaired People E-learning Platform (VIP e-learning platform). In addition, we have continued to expand the collection of talking books on Digital Accessible Information System (DAISY), a form of digital talking books, for visually impaired fellows who wish to read. So far, the collection has seen a total of 8240 books for them to download and enjoy.

Moreover, because of your support, in this past year alone, TDTB has provided services to over 100 visually impaired. These services, besides the aforementioned, include pieces of training to use smartphones, support groups as well as individual and group counseling. And seeing that there was a strong demand for elementary school students to acquire information technology skills, TDTB specifically designed a group course for twenty children and individual courses for twelve. Following these courses, TDTB held the third VIP Talent Competition in October to encourage visually impaired students to utilize assistive information technology. We held the preliminary round on the VIP e-learning platform and the finals in Taichung for typing accuracy and Internet search efficiency. To our great satisfaction, the look on the parents’ faces when they were cheering their children on was priceless and made everything worthwhile.

In order to promote the concept of accessible web design, TDTB cooperation with seven universities and one NPO, with more than 200 people participating, including students and IT professionals, and held a prize-giving contest at Taiwan Normal University. Participate and interact enthusiastically, let everyone know more about the concept of accessible web design and its importance.

In addition to the courses, pieces of training, and counseling, TDTB also endeavored to encourage the visually impaired fellows to step out of their comfort zone by organizing six cultural tours. Accompanied by the professional guides and volunteers, TDTB was able to take groups of visually impaired to visit the Puppetry Art Center of Taipei, Taipei Museum of Contemporary Art, Lin Yutang House, National Palace Museum, the Red House and the Western Temple of the Vow. These tours have not only allowed the visually impaired to experience the rich history and art of the Chinese culture, but they have also enabled the volunteer to better understand the needs of the visually impaired people and the work that TDTB does.

Last but not least, TDTB also hosted five rehabilitation experience sharing events to encourage the visually impaired fellows to return to their normal life or workplace. Five visually impaired speakers, Yun-Shuan Lee(), Fan-Rong Lai(), Dianna Fu(), Yun-i Yang () and Jan-Li Wang(), shared their journey from vision loss to faith recovery. We also hope that these events would attract more volunteers to join us and help make the lives of the visually impaired better.

Our ultimate goal is to assist visually impaired fellows to return to the workplace, empower them and transform them from recipients to the giver. Global Giving is holding the Year-End Campaign 2019 right now. If you are interested in supporting us at the end of 2019, you can respond to GG's plan and donate 4 times (recurrent monthly)by credit card before the end of the year. We sincerely hope and welcome you to sponsor us or join our volunteer team. If you wish to get more information, please click on the link: http://www.tdtb.org/ and get on our official website, or just kindly give us a call at +886 02-23894915. Your care and support is our most powerful momentum, and we hope to continue this journey with you in the coming year 2020. 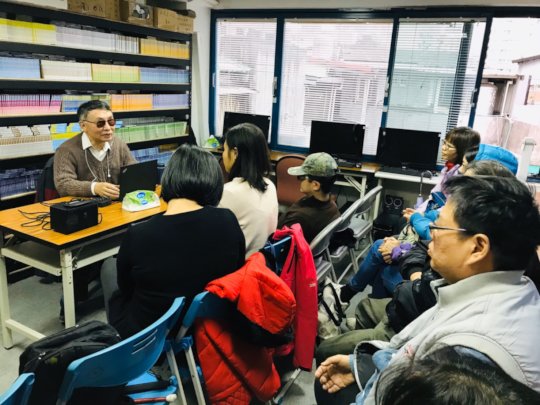 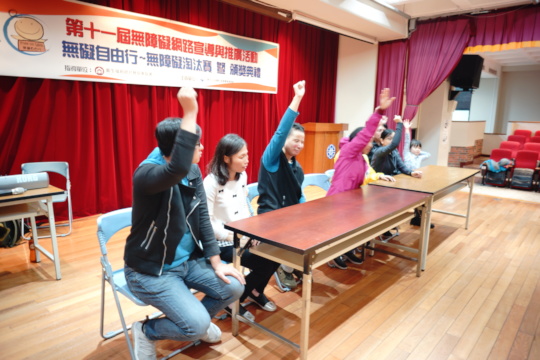 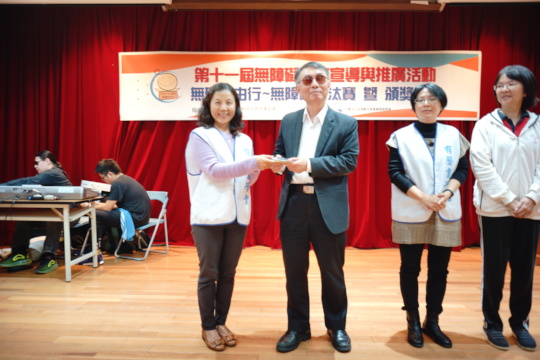