News from the indicator development

One of the indicators we are testing (helioz.org)

Every 20 seconds, a child dies because of diarrhea. As diarrhea is mostly caused by poor water, sanitation and hygiene conditions, we feel that our project can make a difference in this regard. In the project, which you supported in the past, we want to develop and produce a low-cost device to tell the user when their water is safe for consumption by making use of the method of Solar Water Disinfection (SODIS). Here is a short update from the latest developments:

One of our partner organizations (helioz.org) has just managed to produce a first small series of their indicator. We are currently talking to this organization on how to obtain funding for a field test - we want to give this device to 1,500 families in order to collect more data on the use and usefulness of the current design. Producing the device was just a part of the project, we now need to obtain funding for the distribution logistics, for the field promoters and for the data collection process.

This field test is important as it will help us identifying what are the key factors for an adequate product design. In our case, indicating the user what to do is not as simple as you'd expect: We need to distinguish three different states (turned off; turned on an in progress; ready) and communicate these states to the user in a simple way. As we want to use the indicator with low-income families and with people who often are illiterate, we need to find ways of communicating with the user without the use of text. In order to be able to use the same device in a number of different cultural settings (not only in Bolivia, but in Latin America, Africa and Asia), the communication also needs to be universally understood. Luckily, the spread of mobile phones in many low-income countries helped to establish a set of almost universally understood icons and we expect to use some of them (e.g., a smiley).

Meanwhile, we also want to test alternative designs. Ideally, we’d be able to field test different products simultaneously in one setting in order to compare their effectiveness and reliability. We hope that by creating some competition among different providers we will obtain the best results: a low-cost indicator which can help thousands of families to determine when their water is safe for consumption. With a small donation, you can support us in this task and be part of a simple solution for saving lives.

Thanking you in advance and with best regards from the project team, 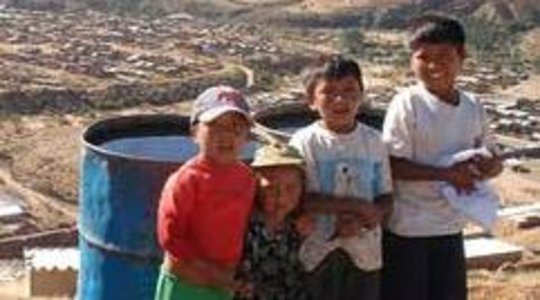 Water is stored in used oil barrels: not safe

Wednesday, October 17 is another Bonus Day. This means that all donations we receive that day will be matched by 30% by the Global Giving Foundation. This is an excellent opportunity to make your donation have an even bigger impact than usual, enabling additional families in Bolivia to access a micro-credit for water and sanitation improvements.

As we have reported earlier, the project keeps pushing ahead. Due to its nature, the project is advancing family by family, and even though we want to reach our goal of 100 credits approved by the end of the year, we are also aware that more important than than the number of credits is the change this projects brings about: families who have accessed credit are now able to store drinking water in large, safe tanks and do have water available all the time - previously, they were storing water in used (!) oil barrels, and because water is delivered only every 3-4 days by the tanker trucks, there were many days when there was no water at all. In this situation, a safe water tank makes a huge difference, not only for the wellbeing of the families, but also for health: where water is short in supply, basic hygiene tasks such as washing hands become a major challenge and frecuency of diarrheas and other waterborne diseases increase rapidly.

In the meantime, we keep promoting the micro-credits in peri-urban areas of Cochabamba and some surrounding small towns. One of the key obstacles for poor people to access credit are the security requirements: One needs to be land owner or have a long-term renting contract - both things are very unusual in informal settlements. Our micro-finance partner (EMPRENDER) is offering alternative securities (paid electricity bills, for example), and currently, we are also evaluating the possibility of giving credit to groups of people - experience has shown that this is a viable alternative which has considerable potential.

We will keep informing you about further developments of our project. Please take advantage of the opportunity of Bonus Day (October 17) and pass on the word to other people who may be interested in supporting our work.

With a big "Thank You" from the whole project team, 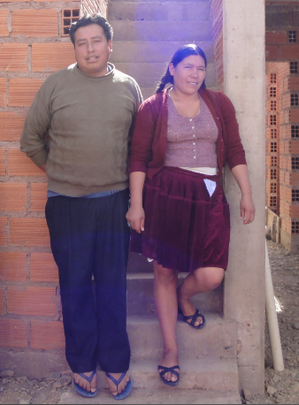 Edgar and Felicia, two of our micro-credit clients

This is a short up-date from the field from the project to provide families in Bolivia with micro-credits for water and sanitation improvements.

Both in numbers and in processes, the project is now getting to speed - after a long phase of institutional negotiations and trials of different models, we can now focus on the promotion of the micro-credits. Since May, $6,000 in credits have been disbursed to nine families, and further $18,000 are in the process of technical and financial evaluation (by the way: the donations we receive through GlobalGiving are not used for the credits but for the promotional and educational activities of the SODIS Foundation). And here is another important number: 0% of credit defaults...

However, the project is not only about numbers, it is also - and most importantly - about people. For example Edgar Anagua and Felicia Crespo, a young couple who lives in the peri-urban zone of Cochabamba. For many years, they lived without a bathroom or toilet, which is quite a common situation in this area where the water distributions network (or the sewer, for that matter) does not exist yet. Edgar and Felicia were aware of the importance of basic sanitary installations and previously had inquired with local banks, but their requirements for micro-credit were all to stringent. Thus, when they heard of our project they immediately contacted us, and within a few days the credit was approved. For $1,500, they were able to buy a big water tank and construct the bathroom including a toilet and a shower (see pictures).

Today, they have their own toilet and they can even take a shower - which is not only a luxury in this area but really increases quality of live. Among other things, they noted that their children are much healthier, which also brings about savings and productivity gains for the parents. As Edgar Anagua points out: "This micro-credits are a great opportunity to improve our lives. This experience also taught me to be more responsible, to work hard and to be serious about my dreams".

For us, this is just one of many examples where we witness how the project is making a big difference in lives of families. And like Edgar and Felicia, there are thousands of people who need an opportunity to improve their living conditions - not by free give-aways but by their own work. Because micro-credit and sanitation are not only about survival, but also about something we sometimes forget: dignity. 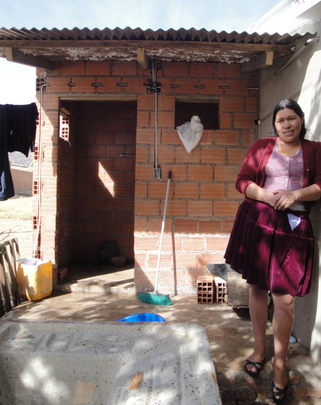 Basic works for the bathroom/shower are finished

‹ 1 ... 6 7 8 9 10 11 12 13 ... 23 ›
WARNING: Javascript is currently disabled or is not available in your browser. GlobalGiving makes extensive use of Javascript and will not function properly with Javascript disabled. Please enable Javascript and refresh this page.