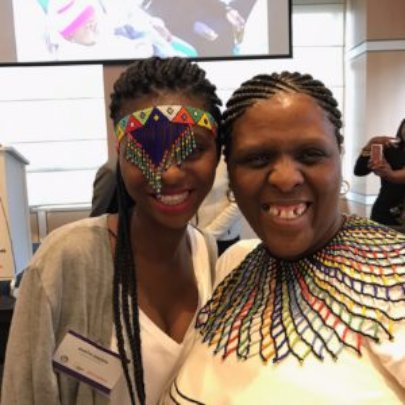 Last fall, we introduced you to Babalwa Mbono, a South Africa-based mothers2mothers (m2m) employee, and her teenage daughter, Anathi, who were in New York for United Nations General Assembly gatherings. Right now, they are on Capitol Hill in Washington DC being featured at an event celebrating 15 years of the U.S. President's Emergency Plan for AIDS Relief (PEPFAR). Babalwa tells her story here.

“When I was eight months pregnant with my second child, Anathi, I learned I was HIV-positive during a routine test. I went into shock.

I kept asking the counselor at the clinic if she was sure; I wanted to believe it was some cruel joke. I looked and felt perfectly healthy, unlike my older sister, who had died of AIDS-related tuberculosis several years earlier.

I went home and angrily confronted my husband. He denied he’d infected me, but I made him go straight to the clinic, where he, too, tested positive. He was deeply ashamed, and kept apologizing, but I was furious.

I kept picturing my sister, so weak and emaciated, at the end of her life. I worried that my baby would be born with HIV, and that I wouldn’t live long enough to care for him or her. I felt lost and afraid, with no idea what to do.

That’s when my counselor told me about mothers2mothers, which she described as a support group for women who were HIV-positive. I was connected with a Mentor Mother, a local mom living with HIV who had been trained as a front-line healthcare worker. She reassured me that my diagnosis was not necessarily a death sentence for either me or my baby. She also told me about antiretroviral treatments (ARVs) that would greatly reduce the chances of me transmitting HIV to my baby during my pregnancy.

There was another pregnant mother in my support group, and having someone else to voice my fears to was very helpful because my husband was still in denial and wouldn’t talk about it. I began to feel empowered—like I was finally in control of my life after months of feeling like a victim.

Still, I was terrified when I went into labor. The happiest moment of my life had been giving birth to my first child, but when I delivered Anathi and held her in my arms, all I could think of was whether or not she was HIV-positive.

She was tested at birth and periodically for months afterward, but we could not definitely rule out infection until she was 9 months old. Those first few months of her life weren’t spent celebrating her first smile, the first time she sat up or the first time she crawled. I was literally living in fear.

I also wasn’t able to breastfeed her, like I did my son, because of concerns about HIV transmission, and I felt guilty about that. Thankfully, I had the other women in mothers2Mmthers, a whole new community of sisters who understood what I was going through.

When I learned Anathi was HIV-negative, they were the first people I told.

I was so grateful that I had mothers2mothers in my life that I agreed to become a Mentor Mother.

I wanted to give back to a group that had given me so much. It was empowering for them, but also for me. It was also a great opportunity to work in a healthcare environment in which I could learn more about some of the research and treatments for HIV.

It’s been nothing short of miraculous that I’ve been able to see my babies become teenagers. I told Anathi that I was HIV-positive last year, when she was 13. It’s very difficult to disclose this type of information to your child. I worried about how she would take it. I could tell she was shocked and upset, but I reassured her that I was still in good health and that she wasn’t infected.

But now that she’s a teenager, I’m faced with the challenge of letting her out into the world. Her friends are starting to have sex, and some are pregnant and a few even have HIV. I’ve made sure we talk openly about HIV at home, and I’ve made it quite clear to Anathi that while I feel she’s too young for sex, if she does decide to have it, she needs to insist that her partner wear a condom.

It’s not easy for any parent to have these conversations, but it’s important, since we can’t be with our children 24/7. We need to give them the tools to make their own informed decisions.

Over the last 14 years I’ve gone from counseling other women on HIV and family planning to training other mentors and seeing them go on to have fulfilling careers as nurses and social workers.

Almost 99% of babies in mothers2mothers’ South Africa programme test negative for HIV, and that makes me thrilled. I feel like I’ve done my job. I’ve watched countless pregnant women break down when they tell me they have HIV—and then helped build them back up.

These mothers face so many challenges, yet they all come back for follow-up visits proud and determined. And I’m determined to always be there for them."

“The dream of ending mother-to-child transmission of HIV in Mozambique can become a reality, if we can collaborate to find ways to keep women and families in care for longer.”

That was the clear consensus in late January at the gathering in Maputo for mothers2mothers’ (m2m) official launch in Mozambique. The launch brings the number of countries in sub-Saharan Africa where m2m operates to eight.

Mozambique is one of the countries worst affected by the HIV/AIDS epidemic. Estimates suggest that around one in eight Mozambicans is living with HIV and 130,000 pregnant women are in need of antiretrovirals (ARVs). The country has made progress in reducing infections among children and increasing both the number of women and couples testing for HIV and the number of HIV-positive pregnant women on ARVs, yet like many resource-limited countries, Mozambique struggles with retaining HIV-positive pregnant women and new mothers in care, which has resulted in an increased risk of HIV transmission during the breastfeeding period and lower rates of testing among HIV-exposed infants.

“This can change. In countries facing similar challenges to Mozambique, mothers2mothers has achieved virtual elimination of paediatric AIDS for the past three years in a row among our enrolled clients,” m2m President and CEO, Frank Beadle de Palomo, told the audience gathered for the launch.

m2m has formed a strategic partnership with the Mozambican Health Ministry (MISAU) to bolster the country’s efforts to eliminate paediatric AIDS and reach global goals. m2m will roll out its Mentor Mother Model—through which HIV-positive women help expectant mothers and breastfeeding women to avoid passing the virus on to their children—across the country through a blend of direct service delivery, by partnering with other NGOs, and by providing technical assistance. An initial $6 million in funding over a two-year period is being provided by the President’s Emergency Plan for AIDS Relief (PEPFAR), administered through the U.S. Centers for Disease Control (CDC) and the United States Agency for International Development (USAID).

Working in close collaboration with MISAU, Jhpiego, and other partners, m2m will initially provide Mentor Mother services in 24 high-volume health facilities, including in the provinces of Zambezia and Sofala, which have among the highest rates of HIV in the country. m2m Mentor Mothers will work in these facilities and the surrounding communities, visiting women and families at home who have not accessed medical care or who have dropped out of treatment and linking them to Mentor Mothers at the health facilities. In addition to direct service delivery, our technical assistance and implementation will include developing robust curriculum, training, and monitoring and evaluation tools to help MISAU and other partners.

“mothers2mothers has a long track record of working as a trusted partner to governments and NGOs to end paediatric AIDS,” Frank said. “We have seen our Mentor Mother Model become national policy in nations including South Africa and Kenya. Now, we look forward to sharing this knowledge and expertise with our colleagues in Mozambique to ensure the vision of an HIV-free generation becomes a reality.” 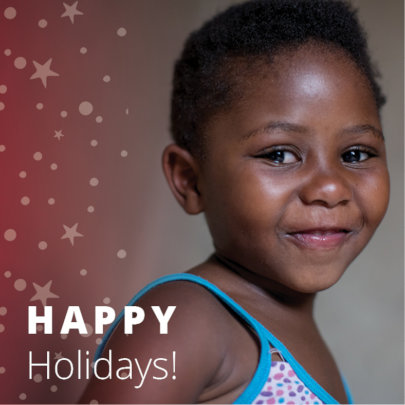 As we draw to the end of another incredibly busy year, I would like to reflect on what 2017 has meant for mothers2mothers (m2m) and the communities we serve across eight sub-Saharan African nations.

Three years ago, m2m embarked on an ambitious strategic plan to grow our programme in both scale and scope by the end of 2017, aiming to deliver services across five integrated programme areas. Over the past year, we have succeeded in executing our strategy. In 2016 alone, m2m and our partners enrolled 1.95 million new clients across these five service lines.

We have remained committed to preventing mother-to-child transmission of HIV, but have also successfully innovated and built on our strengths to comprehensively address HIV’s causes and effects. Our family-centric approach now provides support at almost all stages of life for a range of health and social issues for everyone in a family, including pregnant women, new mothers, infants, children, adolescents, and male partners. Through this model, not only are we ending mother-to-child transmission of HIV, but we are also changing lives through vital interventions in areas such as Early Childhood Development and Adolescent Health and Positive Youth Development.

Here are some of the other results that made us the most proud this year:

If you would like to read more about m2m’s impact, please refer to our full evaluation highlights.

Ending the year on a high note, we were delighted when one of our Mentor Mothers in South Africa, Irene Nkosi, was named by People Magazine as one of the 25 women changing the world. She was the only African on the list, which also included wildlife activist Jane Goodall, actors Gal Gadot and Kathy Bates, and singer and activist Demi Lovato. We are also thrilled to be supported by two amazing women who recently joined m2m as Patrons: activist, actress, producer, and director Salma Hayek and long-time m2m supporter, internationally acclaimed singer-songwriter, and human rights activist Annie Lennox.

We could not have achieved any of this without the amazing support of our donors. To each and every one of you, I send my heartfelt gratitude. Your commitment has made it possible for m2m to achieve these remarkable results. Yet if we are serious about the Global Goals of ending the HIV/AIDS pandemic and delivering gender equality by 2030, the scale of the task that lies ahead is sobering. But with supporters such as yourselves by our side, I know we will continue to make significant contributions to making an AIDS-free generation possible.

From the entire m2m family to you and your loved ones, we send warm wishes for a wonderful holiday season and a very happy and healthy new year.