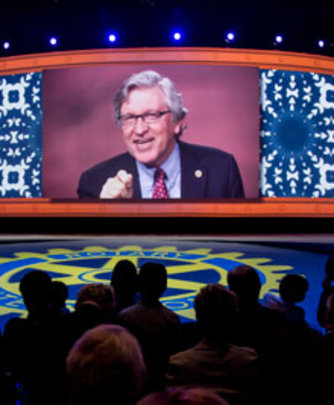 An announcement at the Rotary International Convention in Lisbon, Portugal, set the stage for a bold new chapter in the partnership between Rotary and the Bill & Melinda Gates Foundation in the campaign for polio eradication.

“Going forward, the Gates Foundation will match two-to-one, up to US$35 million per year, every dollar Rotary commits to reduce the funding shortfall for polio eradication through 2018,” said Jeff Raikes, the foundation’s chief executive officer, in a prerecorded video address shown during the convention’s plenary session on 25 June. “If fully realized, the value of this new partnership with Rotary is more than $500 million. In this way, your contributions to polio will work twice as hard.”

The joint effort, called End Polio Now – Make History Today, comes during a critical phase for the Global Polio Eradication Initiative . The estimated cost of the initiative’s2013-18 Polio Eradication and Endgame Strategic Plan is $5.5 billion. Funding commitments , announced at the Global Vaccine Summit in April, total $4 billion. Unless the $1.5 billion funding gap is met, immunization levels in polio-affected countries will decrease. And if polio is allowed to rebound, within a decade, more than 200,000 children worldwide could be paralyzed every year.

Rotary and the Gates Foundation are determined not to let polio make a comeback.

“We will combine the strength of Rotary’s network with our resources, and together with the other partners in the Global Polio Eradication Initiative (GPEI), we will not just end a disease but change the face of public health forever,” said Raikes.

In 2007, the Gates Foundation gave The Rotary Foundation a $100 million challenge grant for polio eradication, and in 2009, increased it to $355 million. Rotary agreed to raise $200 million in matching funds by 30 June 2012, but Rotarians in fact raised $228.7 million toward the challenge.

“Now is the time for us all to take action: Talk to your government leaders, share your polio story with your social networks, and encourage others to join you in supporting this historic effort,” Raikes added. “When Rotarians combine the passion for service along with the power of a global network, you are unstoppable, and the Gates Foundation is proud to partner with you. Let’s make history and End Polio Now.”

At the Global Vaccine Summit in April 2013, the Global Polio Eradication Initiative (GPEI) presented their comprehensive six year plan to eradicate polio. Global leaders and individual philanthropists signaled their confidence in this new end game strategy by pledging close to three-quarters of the plan’s projected US$5.5 billion cost over six years.

The new plan capitalizes on the best opportunity to eradicate polio, with the number of children paralyzed by this disease at the lowest level ever: just 223 cases in 2012 and only 22 so far this year.

Rotary members have been advocating for government support of the polio eradication program through meetings with world leaders and public awareness events to deliver financial commitments in support of the new end game strategy.

These advocacy efforts played a key role in global leaders announcing their confidence in the plan’s ability to achieve a lasting polio-free world by 2018 and their pledged financial and political support for its implementation.

Bill Gates announced that his foundation would commit one-third of the total cost of the GPEI’s budget over the plan’s six-year implementation, for a total of $1.8 billion.

Joining Gates was a new group of individual philanthropists that announced its support for full implementation of the new plan. The total new pledges from philanthropists to the polio initiative amounted to an additional US$335 million toward the plan’s six-year budget.

The Foundation for a Greater Opportunity established by Carl C. Icahn: $20 million

Government commitments to the end game strategy include:

These pledges will  help the program to immunize more than one billion children and will bring the dream of creating a polio-free world closer to a reality. However, there is a need to raise an additional US$1.5 billion to ensure that the new plan can be fully implemented and all children can be reached with the vaccine.  Every donation makes a difference in our ability to reach children in the most vulnerable areas of the world with this and other life-saving health interventions.  Make a contribution and join the global effort to End Polio Now!

Rotary and Partners "This Close" to Ending Polio 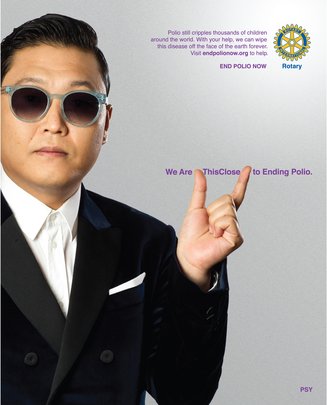 Rotary International’s innovative campaign to develop the World’s Biggest Commercial to raise public awareness about polio eradication has struck a chord with the Pharmaceutical Research and Manufacturers of America (PhRMA).

To help spur participation in the commercial, the largest pharmaceutical trade group in the United States has donated $50,000 to Rotary’s PolioPlus program – enough to provide oral vaccine to protect more than 83,000 children against this paralyzing disease.

Participants in the World’s Biggest Commercial simply upload photos of themselves making the “this close” gesture with their fingers – as in, “We are this close to ending polio” – to the ever-expanding promotional spot at Rotary’s End Polio Now website. In doing so, they’ll rub “virtual shoulders” with such celebrities and notables as Bill Gates, Archbishop Desmond Tutu, Jane Goodall, Amanda Peet, Jack Nicklaus, Jackie Chan, PSY and other high-profile Rotary Ambassadors for Polio Eradication.

Since launching the campaign on World Polio Day (Oct. 24, 2012), more than 4,500 people in over 116 countries have joined the online initiative by adding their names and photos to the World’s Biggest Commercial. Beginning February 1, highlights from the “The World’s Biggest Commercial” will air in Times Square, one of the world’s busiest locations.

“Rotary International’s effort to end polio is seen as one of the world’s greatest public health advances,” said John Castellani, President and CEO of PhRMA. “PhRMA and its members are pleased to have played a part in supporting Rotary in the effort to eradicate polio.”

In addition to helping Rotary set a new Guinness World Record, every person who joins the commercial can choose to add their name to a petition urging the world’s governments to provide the $5.5 billion needed to finish the job and end polio forever.

Rotary launched PolioPlus in 1985, and in 1988 became a spearheading partner in the Global Polio Eradication Initiative, now led by Rotary, the World Health Organization, UNICEF, the U.S. Centers for disease Control and Prevention and the Bill & Melinda Gates Foundation. Since then, more than 2.5 billion children have received the oral polio vaccine, and the incidence of polio has plummeted by more than 99 percent. Fewer than 300 cases were reported worldwide in 2012, down from 350,000 annually in the 1980s.  Today, polio remains endemic to only three countries: Nigeria, Afghanistan and Pakistan.  However, experts warn that if the eradication initiative falls short, polio could rebound rapidly, affecting more than 200,000 children every year.