Rotary staff give time and resources to help end polio 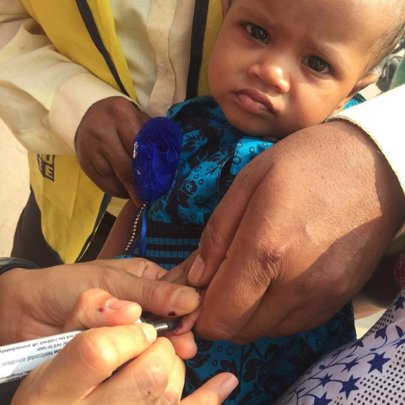 Purple pinkies show the child has been immunized

More than one million Rotary members have volunteered their time and resources to help end polio. In September, for the first time, a group of Rotary staff members joined volunteers and health workers in the field to participate in Subnational Immunization Days in India.  Six staff members were selected to travel to India and participate in the immunization activites, which were expected to reach 172 million children with the polio vaccine. The participants were also able to visit St. Stephens hospital, a Rotary-funded facility that helps provide medical services for polio survivors. The staff members raised funds in advance of their trip and spent one week helping to vaccinate children and raise awareness about polio by sharing their experiences on their social media networks.

On 19 November, a team of Rotary staff members will also join Rotary senior leaders, members from Arizona and around the world to cycle up to 104 miles in El Tour de Tucson to raise funds for polio eradication.  This is the 4th year staff have joined in the event, dedicating hours outside work for training and fundraising.  Last year, Rotarians and staff raised over $13 million for the Ride to End Polio, part of El Tour de Tucson. They hope to make 2016 another record-breaking year.  With just 26 polio cases reported so far this year in Pakistan, Afghanistan and Nigeria, we are closer than ever to reaching our goal.  It will take a global effort to reach every last child and ensure no one ever suffers from polio again.

Want to learn more about polio? Rotary clubs and members around the world will celebrate World Polio Day on 24 October. Events are slated to take place in India, USA, Nigeria, UK, Pakistan, France and more. Health officials and Rotary’s polio ambassadors will also go to Atlanta, Georgia, USA, for Rotary’s flagship event, the first to be held at the U.S. Centers for Disease Control and Prevention (CDC). It will be streamed live and then will be available for viewing anytime at endpolio.org. 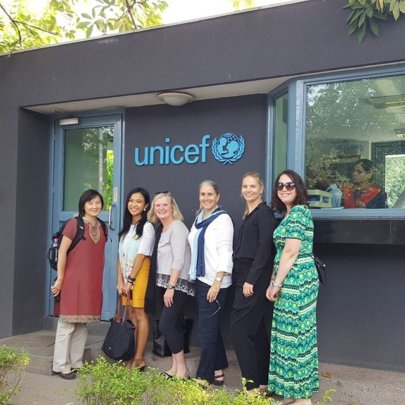 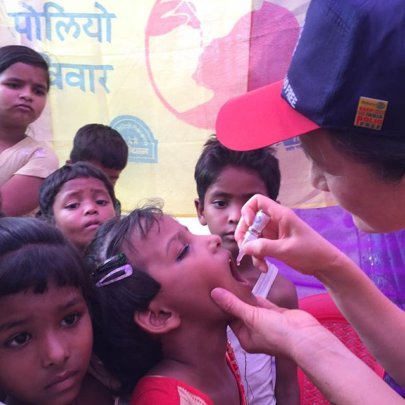 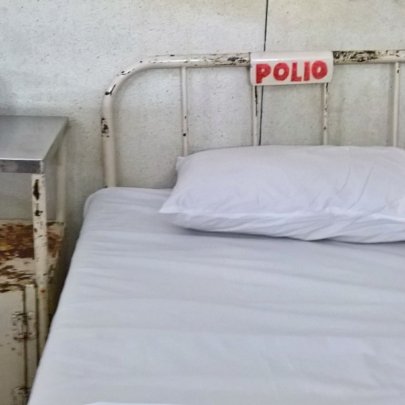 Someday soon these beds will all be empty 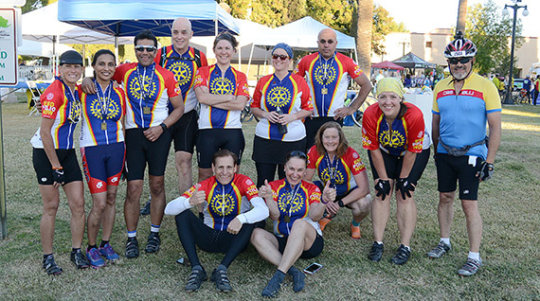 The Rotary Team gets ready to ride for polio

THE IMPORTANCE OF SURVEILLANCE TO END POLIO 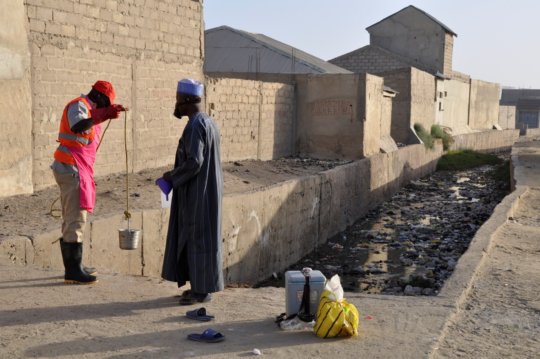 In a small health clinic in Tharaka Nithi in Kenya, Amina Ismail pours over a register documenting all of the doctors’ appointments from recent months, a nurse by her side. She is checking every record for symptoms of polio – the sudden onset, floppy arms and legs that signify acute flaccid paralysis (AFP). As they work, she checks that the nurse knows what the symptoms are, and that she knows what she has to do if a child with AFP is brought to the clinic. This detailed surveillance for polio, working hand in hand with those who know their communities best of all, has been the lynchpin of the work of the Global Polio Eradication Initiative (GPEI).

Surveillance officers like Amina work and volunteer around the world with one aim: the eradication of the poliovirus. Networks of health workers, traditional healers, religious leaders, teachers and parents have helped us identify paralysed children; and then by testing their stool samples in laboratories, we can find out if polio was the cause. This information has enabled us to hold vaccination campaigns to rapidly increase immunity in places where the virus is circulating,  to protect children against paralysis and ultimately remove any hiding place for the virus so that it dies out. Once we have successfully done this everywhere in the world, polio will be eradicated.

We have never been so close to our goal of a polio-free world. There are just two countries left where the wild polioviruses is still circulating – Afghanistan and Pakistan. This means that the partners of the GPEI along with country governments, donors, civil society and parents are working harder than ever before to make sure we know exactly where polio is, so that we can respond quickly to stop every strain of the virus.

Surveillance is one of the most important jobs done to eradicate polio. And today, as fewer countries actually have cases to be found through acute flaccid paralysis surveillance, new and innovative approaches are being used to find viruses even before they cause symptoms.

It is five thirty in the morning in Kano in the north of Nigeria. As the sun comes up and people begin to wake and gather at market stalls, in traffic jams and by small fires on street corners, two men stand by an open sewage system. The men put on protective coats and gloves and carefully lower a small bucket down amongst to collect a small amount of the slow-moving water. They package it carefully, take off their gloves, carefully place  it  in a cool-box and the sample begins its journey to the polio laboratory.

By testing water in the environment for the poliovirus, alarm bells can be sounded ahead of time if children in any area could be at risk. Surveillance officers can be thought of as the doctors who test the world for polio. AFP surveillance helps us to find symptoms that have already surfaced, and environmental surveillance helps us identify even those infections that haven’t shown up yet. Both are essential, in countries across the world – not just where polio remains – to take us across the finishing line.

As Director of Polio Eradication for WHO, I depend on thousands of people, including committed Rotarians, to vaccinate children, research new ways to deliver these vaccines, to plan and advocate and mobilise essential resources. Tracing every last poliovirus through surveillance is a crucial part of these efforts, showing us the symptoms so that we can prevent disease in the first place. Keeping surveillance efforts going in all countries is a huge undertaking requiring skill, vigilance and continued funding if we are to achieve our goal. And what a monumental achievement that will be – all future generations, free from the threat of polio.

Dentler talks about the importance of vaccines.

In 2015, the world saw historic progress against the paralyzing disease, with just two countries – Afghanistan and Pakistan – reporting a single strain of the wild virus. Pakistan, which continues to report the majority of the world’s polio cases, reduced its caseload by 82 percent in 2015 over the previous year. If the current momentum is strengthened, this year may mark the last case of wild poliovirus.

To sustain this progress, and protect all children from polio, experts say $1.5 billion is urgently needed. Without full funding and political commitment, the disease could return to previously polio-free countries, putting children everywhere at risk.

India, once considered the hardest place on earth to stop the disease, celebrated going five years without a polio case on January 13. Minda Dentler, Ironman athlete, polio survivor and mother, reflects on her trip to the country in November:

I am one of India’s polio survivors. For me, and millions of children around the world, today is a special one for global health. It marks five years since the last case of polio in India, a disease which once struck 150,000 children in the country in 1985, the year when Rotary launched its PolioPlus program.

With its size, population density, unsanitary, impoverished areas, and the very high incidence of endemic diseases, many thought that India would never rid itself of the scourge of polio. But thanks to the efforts of thousands of health workers and volunteers as part of Rotary’s efforts in the Global Polio Eradication Initiative, it hasn’t seen a case since January 2011.

To put that in perspective, India used to have, in one hour, as many cases as the U.S. or Canada would have in a year. That was 30 years ago-now it’s completely gone.

As I reflect on this milestone from my home in New York, I know that this is an amazing achievement, but there’s no substitute for seeing the results of this progress in person.

I had this privilege when I returned to India, where I was born in Bombay, for the first time as an adult, on a trip with Rotary to participate in national immunization days last November.

On this trip I met India’s last polio victim, Rukhsar Khatoon, in a tiny village in West Bengal, a state that was once a reservoir for the virus.

She was just 18 months old when she contracted the disease, but thanks to exhaustive therapy, Rukhsar is able to use her legs, and she shyly walked over to greet me, in a beautiful red and gold dress—a specialty of her village, which is renowned for its intricate embroidery.

At that moment I realized that she represents the beginning of a future of a polio-free world – a world that India is now a part of.

As I left Rukhsar’s village, I felt that there is still so much more to be done. 2015 had fewer polio cases in fewer places than ever before. It is more important than ever that we continue this momentum in 2016. But we must also expand our efforts to improve lives around the world at all stages of life. Once children are protected from the threats of diseases like polio, they should be free to gain an education, and empowered to escape poverty. Eradicating polio is the first clear step on that long path, and on this day, I urge you all to help Rotary ensure that no child will ever suffer from this burden ever again. 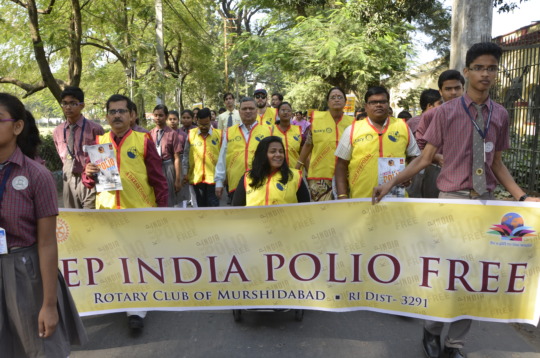 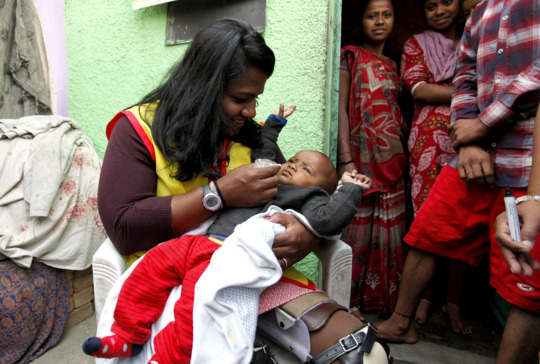