Continuing reaching out to young Namibians 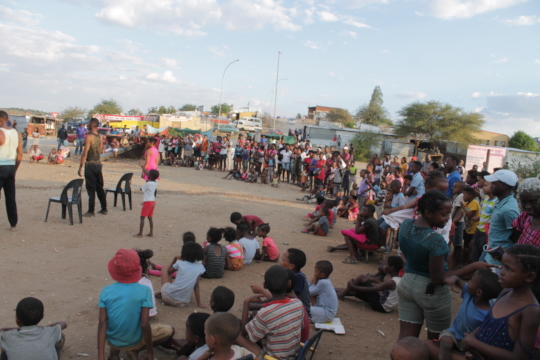 As you know, the Ombetja Yehinga Organisation (OYO) is a Namibian NGO that uses Arts to create social awareness. We believe that solutions can only be found with young people for young people within a given context. Each project works closely with students (called learners in Namibia), their schools and, when applicable the surrounding community. We use non-threatening means of communication, including role-plays, dances, songs, our youth-friendly magazine and we create safe spaces.

After a very successful accelerator campaign in June, we found it very difficult to sustain the effort. We would really like to thank wholeheartedly the few of you who have continued supporting us, either donating monthly or when you could. We greatly appreciate.

We got a large disbursement in July and a small one in August.

In September we performed for a University event on HIV – both during the Official Opening and for the students. We performed in two locations in Katutura (Windhoek’s township) and in two schools (Westmount High School and Ella du Plessis).

In October, we had a chance to continue with our project in two correctional facilities in the north, in Rundu and Divundu. In Rundu we performed for all three Units, discussed issues around HIV testing and encouraged inmates to go for the test. In Divundu we performed for the whole facility. We had not visited any of the two facilities in 2019 and both inmates and officers appreciated the visit.

In October, we also had a chance to work with a renown French artist, William Domiquin. In November, we welcomed a young dancer from Finland, Isabella Mansnerus. We are busy preparing for the World AIDS Day. This year, we will entirely self-fund over 12 performances around World AIDS Day in Windhoek and two regions in the South (Hardap and Karas). This is thanks to your generosity.

You may also want to know:

But - we still need your help

The more funds we can generate, the more young people we can reach. There are 14 regions in Namibia and young people represent more than half of our small population. Since donor funding is tight to specific projects, we can’t always go everywhere. Your support helps us reach more young people in areas where creating awareness is much needed. We have a limited network overseas, but maybe you can help us by encouraging your friends, colleagues or family members to learn about us and support us too. Our link is still: https://www.globalgiving.org/projects/using-arts-educate-4000-namibian-teenagers-on-hiv 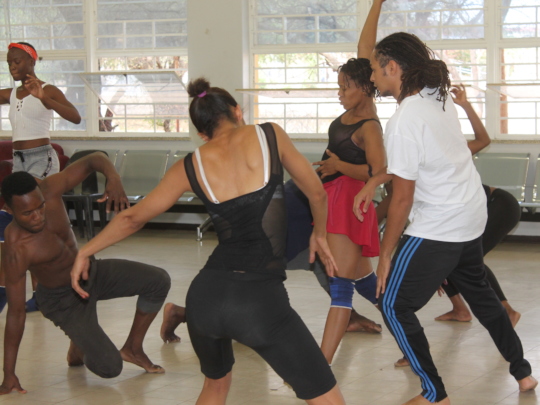 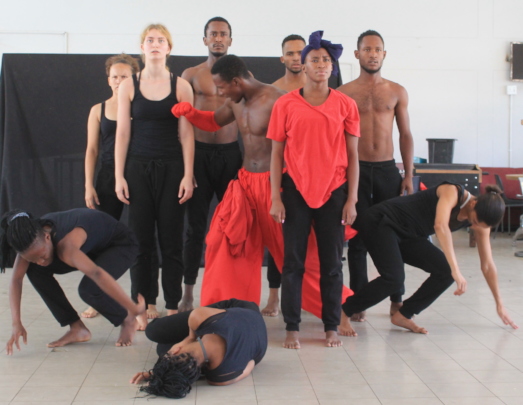 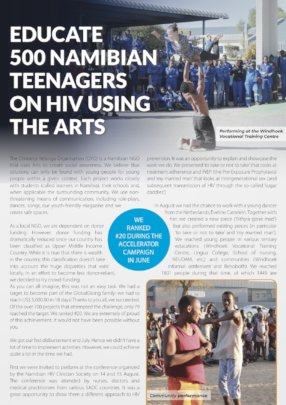 The Ombetja Yehinga Organisation (OYO) is a Namibian NGO that uses Arts to create social awareness. We believe that solutions can only be found with young people for young people within a given context. Each project works closely with students (called learners in Namibia), their schools and, when applicable the surrounding community. We use non-threatening means of communication, including role-plays, dances, songs, our youth-friendly magazine and we create safe spaces.

As a local NGO, we are dependent on donor funding. However, donor funding has dramatically reduced since our country has been classified as Upper Middle Income Country. While it is true that there is wealth in the country, this classification doesn’t take into account the huge disparities that exist locally.

In an effort to become less donor-reliant, we decided to try crowd-funding. As you can all imagine, this was not an easy task. We had a target to become part of the GlobalGiving family: we had to reach US$ 5,000.00 in 18 days! Thanks to you all, we succeeded. Of the over 700 projects that attempted the challenge, only 79 reached the target. We ranked #20. We are extremely of proud of this achievement. It would not have been possible without you.

We got our first disbursement end July. Hence we didn’t have a lot of time to implement activities. However, we could achieve quite a lot in the time we had.

First we were invited to perform at the conference organized by the Namibian HIV Clinician Society on 14 and 15 August. The conference was attended by nurses, doctors and medical practitioners from various SADC countries. It was a great opportunity to show them a different approach to HIV prevention. It was an opportunity to explain and showcase the work we do. We presented ‘to take or not to take’ that looks at treatment adherence and PrEP (the Pre-Exposure Prophylaxis) and ‘my married man’ that looks at intergenerational sex (and subsequent transmission of HIV through the so-called ‘sugar daddies’).

In August we had the chance to work with a young dancer from the Netherlands, Eveline Castelein. Together with her, we created a new piece (‘Ilithyia gone mad’) but also performed existing pieces (in particular ‘to take or not to take’ and ‘my married man’). We reached young people in various tertiary educations (Windhoek Vocational Training Centre, Lingua College, School of nursing, NEUDAM, etc,) and communities (Windhoek informal settlement and Rehoboth). We reached 1801 people during that time, of which 1449 are young people. The Head of Department from Lingua College commented ‘our students learnt a lot. The students expressed interest. OYO showed it in a way that all understood while enjoying the dancing too’. Of note was the performance at the Windhoek Female Correctional Centre. OYO strives to work with Correctional Facilities and involve inmates in discussions. The program officer commented ‘all dances were explained and the dialogue conducted were very engaging and informative. Offenders were able to engage in their mother language and participated fully’.

We also had a chance to organize a workplace training for staff at Londiningi Guest House, a place that has supported us with our programs. We trained 17 staff on HIV related issues. It was nice to be able to give back. The program was well received. Among all the issues discussed, it is clear that PrEP needs more time as many of the staff were unclear about its use. 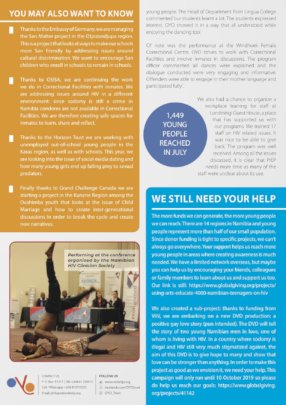