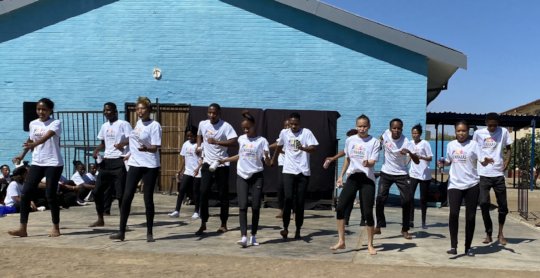 As you know, the Ombetja Yehinga Organisation (OYO) is a Namibian NGO that uses Arts to create social awareness. The period June to August has been extremely difficult. Namibia has been hit by a very dramatic third COVID19 wave. To date, it has been the wave with the highest number of cases and fatalities. Schools closed again, public gatherings were limited again to 10 people and regional borders were closed. All OYO’s project had to come to a standstill.

Thanks to our trusted partner Stichting Horizon we could produce exciting educational clips with the OYO dance troupes on ‘don’t fall pregnant during the winter school break’, ‘COVID19 is no excuses for GBV’ and ‘take care of mental health’. The clips were used on social media and our local channel NBC.

During that period, we negotiated a new grant with the Embassy of Finland for a project in schools in the Omusati and Ohangwana region (September 2020 to August 2021) and a research project with ALIGN.

During that period, we took part in the GlobalGiving littlexlittle challenge and we would like to take this chance to thank everybody for your support. We received several donations and they couldn’t have been timelier. Your support helped us go through this difficult period. Thanks to this support, we could keep on rehearsing with the dance troupe, despite the fact we couldn’t perform. As soon as regulations relaxed, we could perform to a girl’s camp organized in the South and perform during a function organized by the Ministry of Health and Social Services.

During that period, we couldn’t reach much people face-to-face: however, we could reach people on social media and broadcasting. We produced 13 clips and each clip was seen on social media by an average of 883 people (each was seen between 361 and 1,905 people).

At the end of September, once the country had opened again, OYO organised a Kharas Youth Performing Arts Festivals. It gathered together groups from Noordoewer, Koes, Karasburg and Keetmanshoop and the dance troupe. The 50 youth people had a chance to work together, learn from one another and perform together. It was an extraordinary experience.

We are most thankful to everybody who helped us during that period – either through donations or by sharing our call for donation and promoting our organization. In the coming months we will continue asking you to help us reach our goals by encouraging friends and colleagues to support us.

Our link is still: https://www.globalgiving.org/projects/using-arts-educate-4000-namibian-teenagers-on-hiv 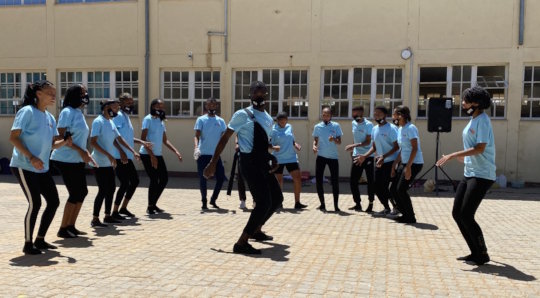 As you know, the Ombetja Yehinga Organisation (OYO) is a Namibian NGO that uses Arts to create social awareness. 2020 had been very difficult, and we were all hoping 2021 would be a little easier. But the year started slowly. Thanks to our trusted partner Horizon we could at the beginning of 2021 work with a youth group in the South of Namibia and tour them in schools, talking with learners about COVID19 but also offering counseling and guidance – many learners felt unsettled after last year’s poor academic performances and were scared to be back in school. The tour was a great opportunity to reconnect with them. We could reach 2,724 people and all the schools visited were grateful for the project.

No performances with the dance troupe could be scheduled before early June 2021 so the team took this chance to train new trainees. It had been a long time since we had the time to properly train trainees, so we tried to turn the situation to our advantage. Also, slowly but surely the planning for the dance troupe started to fill up for June, July and September. We negotiated a project with the Embassy of the Federal Republic of Germany and another small project with STAFE via the French Consulate in Johannesburg.

Unfortunately, other activities have then been canceled – raising lots of concern for the future of the dance troupe and the organization. The current COVID situation in Namibia is not good, with hospitals getting full. We have currently little visibility regarding what we will still be able to do. There is a lot to be done – yet activities reaching small amount of young people by small amount of young people are time consuming and more expensive. We are committed to continue making a difference and our team is more than ever going the extra mile. Funding is, however, a problem.

The little-by-little fundraising campaign in March didn’t yield good results – understandably as many of you also struggle finding your balance in the current environment. We will however continue asking you to help us reach our goals by encouraging friends and colleagues to support us. Our link is still: https://www.globalgiving.org/projects/using-arts-educate-4000-namibian-teenagers-on-hiv

Starting a new year with you 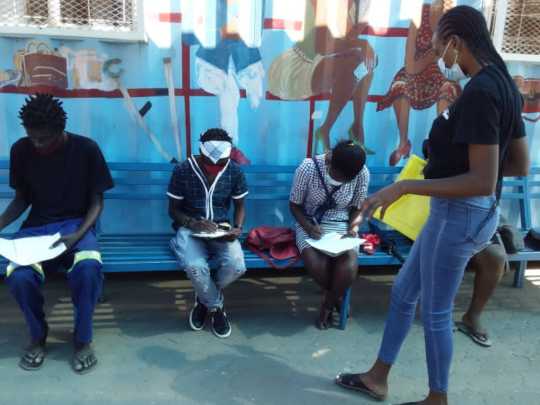 As you know, the Ombetja Yehinga Organisation (OYO) is a Namibian NGO that uses Arts to create social awareness.

As we all know 2020 has been extremely challenging due to COVID19. Schools closed mid March 2020 and only all reopened in the second half of September. However, even if reopened, all extra mural activities have been canceled. It has therefore not been possible for OYO to resume its activities in schools. The OYO dance troupe last life performance was early March 2020. We haven’t interacted with any life public since the beginning of the pandemic.

We continued creating short videos on COVID19 and other related issues such as GBV, LGBTQI+ issues and HIV. Since the beginning of the pandemic we produced 32 educational clips, had over 100,000 views on social media and trained door-to-door 6,887 people using those clips.

Our film ‘Kapana’, the first Namibian queer love story, is a great success internationally. It won the Kim Renders Memorial award for Outstanding Performance at the Reelout Queer Film Festival (Canada) and is runner up” best international film, audience award, at the Out on Film Festival (USA). It has also been selected at the renowned Pan African Film Festival (USA), the Massimadi LGBTQI+ film festival (Canada) and Pride Queer Film Festival (Australia). This is giving OYO exposure. Locally around World AIDS Day we could organize 8 screenings in Windhoek, respecting the local regulations at the time, and facilitate it with 190 people.

Finally we celebrated World AIDS Day. We produced with the dance troupe one clip, hold one virtual event with the UNAIDS Country Representative as special guest and trained four young people in Windhoek who went door-to-door in our informal settlement, addressing HIV and COVID19 and reaching 428 people who do not have access to social media.

Our dance troupe is probably the most affected by the situation. Dancers have not been able to perform to an audience since mid-March. We have taken this chance to train new recruits and currently have 6 dance trainees with us.

Generally speaking we find it much harder to fundraise. We totally appreciate that most of our friends find themselves in difficult financial situations too. During the forthcoming littlexlittle campaign in March 2021 we aim at getting 100 people each contributing US$10. This would help us put OYO on the map again. We will ask you to help us reach our goals by encouraging friends and colleagues to support us.

Our link is still: https://www.globalgiving.org/projects/using-arts-educate-4000-namibian-teenagers-on-hiv

1 2 3 ›
WARNING: Javascript is currently disabled or is not available in your browser. GlobalGiving makes extensive use of Javascript and will not function properly with Javascript disabled. Please enable Javascript and refresh this page.