We mainly worked on old songs (like Erev Shel Shoshanim or Hali Hal) but there is also a new and original song that Yoni composed and wrote that we are working on.

In addition, we participated and played at the inauguration of the new house in the Felm Center to a considerable audience.

We prepared for a concert at the Arava Spiritual Center that gathered many different peace activists and organizations, which was incredible. We continued to work on our material and had the chance to host an interfaith group of Belgian tourists in one of our rehearsals. We shared with them about our story as a band and the work of the Interfaith Encounter Association, and we also performed for them some of our songs. 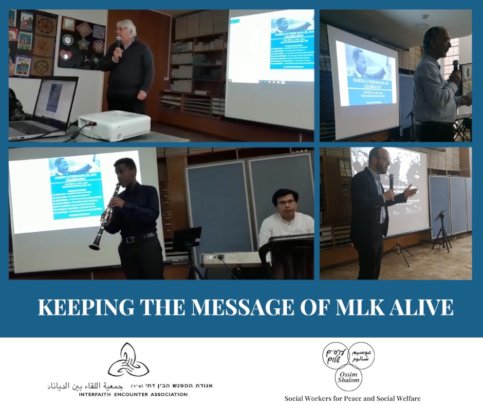 For the first time, the Interfaith Encounter Association celebrated an event in honor of Martin Luther King Jr. Day, in cooperation with Osim Shalom, at the Museum of Islamic Arts. The event was moderated by Carolina, Community Manager of IEA.

Dr. Stolov, Executive Director of IEA, greeted participants saying it is natural for IEA to celebrate MLK's legacy which we very much share. As MLK, IEA holds the vision of transformation of the heart towards harmony between people. We also have a dream of all Holy Land people living in harmony of good neighborhood; a dream they will all learn to see their love to the land as uniting them, not separating them; and a dream they will understand we are all brothers and sisters.

Ms. Wishman, Director of the American Center in Jerusalem, spoke about Minister Theodore Parker who inspired MLK and many others. He said that the arc of history is long but bends towards justice, but only because of people with indignation and hope who push it towards justice. As Pirkei Avot, a 2000 years' old Jewish text, said: "It is not [incumbent] upon you to finish the work, but neither are you free to desist from it".

After a most beautiful musical interlude, by Naor and Aaron who played Verdi’s La Traviata, we were honored to host Her Excellency Dr. Shakya, Ambassador of Nepal. Dr. Shakya reviewed MLK's life story, stressing his genius and that he chose to resist racial segregation in a not violent way, influenced by Mahatma Gandhi. Dr. Shakya said that Nepal always wanted to contribute to peace, harmony and non-violence in the world. One day before he was murdered MLK gave a prophetic speech in which he said that we already see the promised land and we will get to the promised land. Hopefully we all learn to join hands and work together for a wonderful world.

Rabbi Dr. Roth, Director of Mosaica Religious Peace Initiative and Lecturer at Bar Ilan University, brought a few of MLK quotes and then the quote "Alas, in Heaven’s name! Are we not your brothers? Are we not the sons of one father? Are we not the sons of one mother? Why are we different from every nation and tongue that you issue such decrees upon us?!" which sounds like MLK but is actually 2000 years older - from Yehuda ben Shammu’a in the Talmud. Rabbi Roth explained the story of anti-Jewish decrees by the Romans and how Yehuda ben Shammu’a chose not to surrender on the one hand or start armed rebellion on the other hand, but work from within the Roman system, with advice from a well-connected Roman noblewoman and through nonviolent sitting protest, until the decrees were cancelled.

Ambassador Liel shared how he was appointed as the Consul in Atlanta in 1990 and developed connections with MLK Center there, which began with an exhibition of photos from the coming of Ethiopian Jews to Israel. Through this connection he met twice with MLK's widow, Coretta Scott King.

After screening the famous "I have a dream" speech we had some concluding words.

Mr. Shalev, co-chair of Osim Shalom, brought two quotes from MLK: "darkness cannot drive away darkness, only light can", and: "we must learn to live together as brothers or we will perish together as fools".

Mr. Sheiban, Director of the Museum for Islamic Art, shared how happy he was that we chose to hold the event at the museum, and stressed that we have to work together in order to create a better society in Israel. 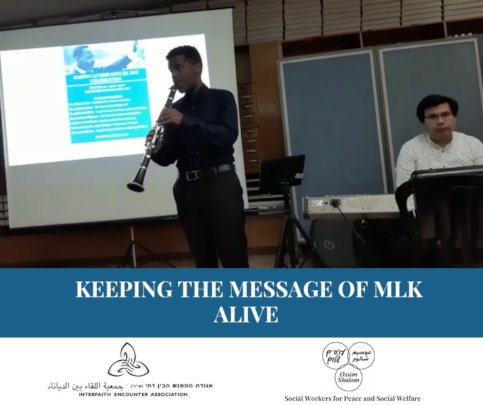 The Interfaith/Intercultural Listening Group met in the village of Hilf-Zubidat near Tivon.

Our guest speaker this time was a Bedouin man and a Sculptor of Wood, and we gathered at his family house. He has created a gallery of work showing the Bedouin tradition through his sculptures. He also includes other themes and inspirations for his work, such as the life and work of former Israeli Prime Minister Yitzhak Rabin. We heard the story of his life and a bit about his parents' origins as well. We sat in an open Bedouin tent in his backyard with the family's herd of sheep just a few meters away.

After the break the group gave him feedback about how his story resonated with them.

We had a large group of people including many that came to the group for the first time.

The Listeners of Life Stories Interfaith Group met in the village of Harduf to listen to Meera, from a neighboring Arab village. Meera, a 25 year old musician and peacemaker, told about her life as a child and coming to understand how she was very different from the rest of the kids. She spoke about her relationships with both Arab people and Jewish people, each group with a different way of thinking, and about many people who were influential in helping her understand herself and her place in society. She talked about her work in music and in peacemaking and how this influenced who she is today and her future direction.

After the break the group gave her feedback about how her story resonated with them and how her frankness and personal courage touched them deeply.

The Listeners of Life Stories Interfaith Group met to hear the story of N., a man who came from Ethiopia. He kept us spellbound for two hours telling the story of his escape from Ethiopia through Sudan as a 13 year old boy. He left his family, with a group of 10 very brave young people between the ages of 13-18 and it took them six months. Most of the trip happened under very difficult conditions.

He spoke about his difficulties arriving in Israel and the discrimination he encountered against him and other people of color and the lack of basic respect that he encountered often. After studying and receiving several university degrees, he has spent his adult life in Israel supporting important projects for the local Ethiopian community.

During the question and feedback part of the evening it was especially touching to hear the interaction between one of our Arab participants and N. It was especially interesting for both of them to have the opportunity to see the discrimination that each of them perceives in this country through the eyes of the other.

‹ 1 ... 3 4 5 6 7 8 9 10 ... 63 ›
WARNING: Javascript is currently disabled or is not available in your browser. GlobalGiving makes extensive use of Javascript and will not function properly with Javascript disabled. Please enable Javascript and refresh this page.