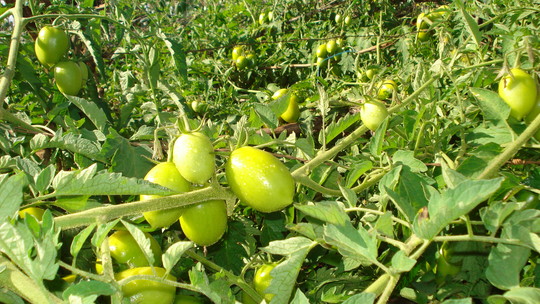 Time has been tough and even tougher with failed short rains of October - December 2011 and the sun extremely hot but amid one old man Mzee Sabur has raised hopes and challenged many his age and peers in the community. In the beginning, with no education he entirely depended on his livestock and when all were dead due to severe droughts his hands were tired until when he met HODI and team. It is from one of these meetings that he took up the challenge and uprooted some crops which he had planned earlier but could not pick due to drought and opted for tomatoes. In the beginning it was only 7 seeds he planted because that is all he could get his hands on and later added 25 more to make it 32 plants.

So many mocked him as he created his own local green house with torn cloths as top cover and tins as his drip irrigation. Some months down the line we visited him and the joy on his face could not be hidden and the hope of getting more seeds to expand his tomato plantation. The demand is so high that it is the buyers who wake him up in the morning before breakfast to pick the ripe ones for sale. As his plants increase in number so is the demand for water and this is a big challenge and some days his plants go without water. But despite all this challenges and obstacles he has been able to overcome hunger at his home and support his family financially.

As HODI we are challenged to replicate the same in other villages and households through purchase of seeds and water tanks for water storage and drip irrigation. With your support we will be able to have more examples of homes with basic food security.

By Fatuma A. Adan - Project Leader

Fatuma Abdulkadir Adan of the Horn of Africa Development Initiative (HODI) wins the 2011 Stuttgart Peace Award for her work in conflict resolution.


In conflict-torn Marsabit, North Kenya hundreds of lives have been claimed the past few years. Politicians in the distant capital of Nairobi take no notice of this conflict. This propelled Fatuma Abdulkadir Adan (33) to take matters into her own hands by founding an NGO called Horn of Africa Development Initiative (HODI). Since 2003, HODI works with youth and women as major stakeholders in ending the violence in Marsabit.

The Stuttgart Peace Award is being granted for one of HODI's programmes, which  uses sport to attain social cohesion. Football games bring together youth (both female and male) and encourages them to interact peacefully - also off the field. "Shoot to score, not to kill", thus HODI's motto in this programme, reflects its aim.

The award comes with a 5000 Euro prize and will be presented in Stuttgart on 17 November, 2011. This is the second award for HODI, having won the Hope through Education Award in February 2011.

Back to school! a second chance in life

By Fatuma A. Adan - Director

It has been a great year for HODI and the for HODI teams. This year three child mothers are back to school and the mother of one of the girls who benefited from the scheme was in tears as she received the news!

“To me the life of my girl had come to an end with marriage, when you asked her to go back to school, the big question for me was how and who will pay her fees? But today I know with this support she has a second chance and without your support she will be a child nursing another child with nothing to live on.”

After being rescued and returning home she joined the team again was training with the other girls and so much has changed in her, she is more courageous and no longer ashamed of being a child mother. The HODI girl’s team gave her the motivation and now she is an inspiration and an example to other young mothers her age.

HODI boys and girls teams trained for 5 weeks and at the end of the training the boys represented HODI in an international tournament in Moshi Tanzania. While two of the girls from the girls team traveled to Germany as part of a soccer exchange program.

The process of purchasing the parcel of land has begun but has not been finalized yet. The process of has begun of giving child mothers a second chance to go back to school and in the wider community there is a greater need to reduce the high dropout rates among the girl's. It is one thing to help them go back to school and we need your support to retain them and ensure completion.

We are grateful for your continued support as your support is making us to reach to the most vulnerable members of the community and give a second chance to child mother's!