Rising from the Ashes: Six Month Report from NVCF and the Butte Strong Fund

With an eye on long-term recovery, three major fundraising efforts decided to band together to form the Butte Strong Fund.

The Butte Strong Fund is a partnership of the North Valley Community Foundation, Sierra Nevada Brewing Co. and the Aaron Rodgers NorCal Fire Recovery Fund. The Butte Strong Fund was set up with the specific intent to work alongside communities for years after the fire. Through an assessment of recovery needs, the Butte Strong Fund issues grants in six categories: housing, business recovery, community development, health and wellness, children and youth services, and education.

Sierra Nevada raised millions by enlisting brewers nationwide to make Resilience IPA. More than 1,400 brewers signed up to make the fundraising beer. Sierra Nevada supplied a base recipe and asked its suppliers to donate ingredients to the brewers, with the request that the total price of each pint sold would be donated back Butte Strong Fund Committee Sierra, Ken and Brian Grossman of Sierra Nevada Brewing Co. to the recovery effort. The Resilience effort resulted in roughly 4.2 million pints brewed.

The NVCF contributed money from its Camp Fire Relief Fund.

“There have been certain leaders and organizations who’ve taken extraordinary actions to help during the worst time in our communities’ history. Sierra Grossman is one of those leaders, and her family’s business, Sierra Nevada Brewing Co., is one of those organizations,” said Alexa Benson-Valavanis, president and CEO of the NVCF. “They have always been there for our communities but no one could have imagined this level of care and support.”

Grant applications are submitted to the Butte Strong Fund. Sierra Nevada makes its own decisions on grant requests, while the NVCF portion of grants is approved by a committee of nine community members, several of whom lost homes in the Camp Fire. By the six-month anniversary, the Butte Strong Fund had awarded more than $6.2 million in grants. That number is now closer to $16 million.

Organizations can learn about how to apply for grant funding at www.buttestrongfund.org

The attached report shows every single grant made within the first 6 months after the fire. Running totals are available on our websites and a new, comprehensive report will be published at the 1-year anniversary of the Camp Fire

The Camp Fire Evacuation Relief Fund (later shortened to the Camp Fire Relief Fund for clarity due to the fund adjusting to meet emerging needs) has concluded its initial grant program aimed at direct relief and immediate response. The North Valley Community Foundation is still making grants under the new, collaborative Butte Strong Fund, which has brought in additional funders and is working to make large grants to address long-term recovery efforts. The Butte Strong Fund will be touched on again briefly at the end of this report.

The Camp Fire Relief Fund grant program made 210 grants totaling $3,663,635.31 between  11/13/2018 and 4/29/2019. This program was designed to have a simple application process and simple reporting requirements so that money could be deployed quickly to meet the immediate needs of those who have been directly affected by the Camp Fire. The grants had a stated cap of $25,000, but the grantmaking committee was empowered to make exceptions with staff advice in compelling circumstances.

At the end of the program, NVCF grantmaking staff analyzed the records and divided the core areas of funding into 6 categories. In the attachments below, there is a pie chart showing the breakdown of the grants, and a pdf that shows each individual grant, the amount granted, the purpose, and the date that it was granted. This can also be found as a searchable database on our website at www.nvcf.org/nvcf-camp-fire-grants-made/

The first and most desperate needs were those of the emergency evacuation shelters, which is what NVCF initially opened our GlobalGiving campaign to support. This began with $10,000 grants to each of the various shelters which opened in the hours and days after the fire began but continued to support organizations providing specialized housing to special-need evacuees and emergency temporary housing. In all the Camp Fire Relief Fund grant program granted $338,296.00 to support emergency housing.

The after emergency shelter needs were met, the largest emerging need was simply direct cash and card assistance for the tens of thousands of people who lost everything. This need was dire and only grew as time passed and state and federal resources were quickly used up. NVCF worked with dozens of partners to distribute this aid, following best practices and not opening up the grant program for individual application. Through our partners and initiatives, the Camp Fire Relief Fund granted $1,575,880.00 to support direct assistance work.

The Camp Fire displaced nearly every school in Paradise and on the Ridge. The few that were still inhabitable did not have internet or safe drinking water. Additionally, all schools in the county were closed for weeks after the fire due to unsafe air and displaced staff, creating a child care crisis for thousands of parents who still had to work during the disaster. There were also countless needs related to senior trips, class camping trips, and even a few school dances that relied on fundraising dollars that were simply no longer available in the affected area. NVCF considered these quality of life programs to be vital to the mental health and recovery process of the children affected by the fire and decided to classify these types of projects as relief to those directly affected by the fire. All told, the Camp Fire Relief Fund grant program granted $1,038,418.28 for education and youth services.

The health and wellness of our community were harshly affected by this disaster. The stress, poor air quality, poor temporary living conditions, and many other effects created new health crises and exacerbated existing ones. NVCF believes in a holistic approach to healing and accepted applications from acupuncturists and music therapists as well as hospitals and physical therapists. The Camp Fire Relief Fund grant program granted $326,544.00 for health and wellness.

Another need that quickly emerged was animal services. As people fled their homes, some were forced to leave pets and livestock. Local nonprofit emergency animal disaster groups were able to save many of these animals with the support of grants from NVCF. The much larger concern, however, was evacuees who brought their pets but did not have a place for them as they moved into trailers and temporary housing. Grants were desperately needed to increase the capacity of our local no-kill shelters to house this massive influx on pets, and support was needed to find homes for these pets in addition to the already large adoption stock in Chico. The Camp Fire Relief Fund made $194,668.00 in grants to support animal services.

Finally, there were important projects proposed that did not fall cleanly into any of the previous five categories. These projects, which we refer to as community services, include funding to support a memorial service for the 85 people who died in the fire, improved radio equipment in the burn area, a partial match on a grant to support a dedicated Camp Fire reporter embedded at the local paper by Report for America, and support for local volunteer firefighter departments that sustained losses in the fire. In this diverse category,  the Camp Fire Relief Fund grant made $189,829.03 to support community services.

This GlobalGiving project was directly related to the Camp Fire Relief Fund grant program, which has recently stopped making grants, but that does not mean that our relief and recovery work is finished. I would like to briefly touch on the long-term recovery work that we have done. These numbers are not reflected in the attachments.

Note: The Butte Strong Fund project has an active application to GlobalGiving that we were invited to submit.

The Butte Strong Fund started to be formed in January as a collaboration between NVCF, Sierra Nevada Brewing Company, and the Aaron Rodgers NorCal Fire Recovery Fund. It quickly became obvious that it would take years to recover, with losses estimated in the billions. Even during the initial relief efforts, the NVCF was also focused on the greater and more expensive task of long-term recovery. The healing and recovery needs are massive based on the levels of trauma and tragedy inflicted. There are no quick fixes for recovery. To rebuild fully, communities will need to access additional financial support for not just months, but years.

The Butte Strong Fund has already granted $6,427,384. These grants include a $1.5 million grant to reduce fees charged to those who are seeking a permit to rebuild homes on their properties, a $1 million grant to provide temporary workforce housing for the hundreds of workers in our town to help in cleanup and recovery, a $750,000 grant to support business recovery efforts to help those who lost their businesses in the fire, $288,419 to bolster case management efforts (with much more coming in this category) to provide long-term holistic support those those who still need direct assistance, and many, many more. More information on these grants and upcoming grants and initiatives can be found at www.buttestrongfund.org.

Finally, our response and recovery efforts have intersected with our normal operations as a community foundation and we have worked with 25 different groups to establish funds here at NVCF so they can independently raise money and direct it to the areas that they work in. This includes employee care funds and donor-advised funds primarily. The largest of this was a program fund that we created for Aaron Rodgers, a Butte County native. His fund has already granted $270,211. The other 24 have raised more than $4.6 million combined and granted more than $3.7 million. 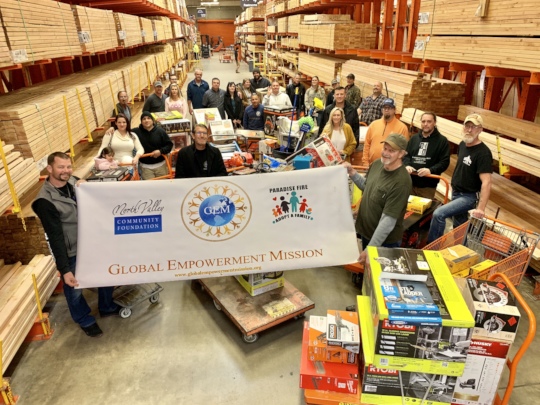 A grantee replacing lost tools for job use

As of Feb. 12, our Camp Fire Relief Fund has granted more than $2.2 million to organizations and agencies on the ground directly supporting people impacted by the Camp Fire. This includes housing assistance, gift cards, gas cards, child care programs, food and clothing distribution centers, cellphone chargers, and every other imaginable need that emerged in the wake of this disaster. We’ve granted hundreds of thousands of dollars to organizations providing direct assistance to people impacted by the Camp Fire.

Please visit https://www.nvcf.org/nvcf-camp-fire-grants-made/ to see every single grant that has been made for Camp Fire relief, who it went to, when, and why. This is updated weekly.