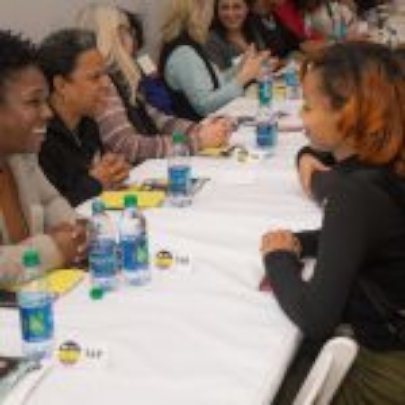 On March 9, 2018 over 600 young women and girls joined Washington Area Women’s Foundation for the inaugural GirlsLEAD Summit. The all-day event welcomed 300 young women and girls between the ages of 12-24, and was held at the University of the District of Columbia. Over 150 women leaders joined the Summit for Speed Mentoring, and more than 100 women conducted workshops and sessions throughout the day.

Award-winning journalist, media personality and former editor-in-chief of Teen Vogue, Elaine Welteroth, was interviewed by WPGC 95.5.’s Sunni during an intimate Q&A. The girls then participated in a speed mentoring event hosted by WUSA9’s Lesli Foster. Each of the young women had a chance to get one-on-one advice on creating pathways to success from several of the more than 150 dynamic, female business, nonprofit, and government leaders gathered in the room.

DJ Beauty and the Beatz kept the party going during lunch, where are all the girls danced and sang along to the latest hits. The young women and girls experienced workshops and sessions conducted by companies like The Bill and Melinda Gates Foundation, Volkswagen, Audi, National Women’s Law Center, Girls Who Code, Beltway Poetry Slam Team, our Young Women’s Advisory Council and more!

The GirlsLEAD Summit was sponsored by Johnson & Johnson, the NoVo Foundation, and the Coca-Cola Foundation. 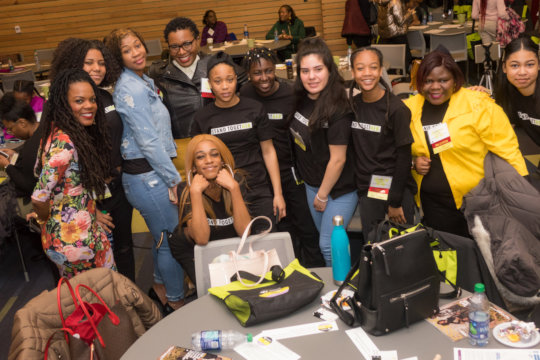 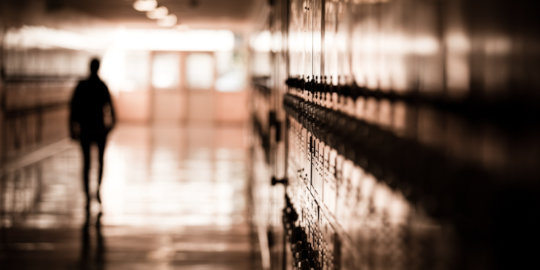 On January 30, 2018, C. Nicole Mason, the Vice President of Programs at the Foundation submitted a Testimony in support of the Student Fair Access to School Act of 2017 introduced by at-large Council Member David Grosso and supported by Council Members Bond, Cheh and Nadeau. The legislation would limit out-of-school suspension of students in kindergarten through eighth grade to the most serious of circumstances and bans its utilization in high school for minor offenses.

Passing the legislation would put the City on a path to increased educational parity and equity for the most vulnerable students in our system. The full testimony is written below:

Good Afternoon, my name is C. Nicole Mason, and I am the Vice President of Programs at the Washington Area Women’s Foundation, home to the Young Women’s Initiative–our city-wide effort to improve life outcomes and chances for young women and girls of color in the District. As a part of Young Women’s Initiative, I also facilitate the Young Women’s Advisory Council, a bi-weekly group made up of 21 young women and girls of color between the ages of 12-24 that reside in the City.

Needless to say, I have a personal interest in making sure that every child regardless of her race, ethnicity or socioeconomic status is in the best position to succeed and have her social, emotional and educational needs met while in school, and on a daily basis. Currently, this is not the case.

When the Student Fair Access to School Act of 2017 was introduced by Council Member Grosso, we at the Foundation believed it was an opportunity for the City to address glaring disparities in out-of-school suspensions, create uniform standards across District of Columbia Public Schools (DCPS), encourage positive approaches and the use of evidence-based and promising practices to discipline in schools, and to curb out-of-school suspensions for minor offenses.

Passing the legislation would put the City on a path to increased educational parity and equity for the most vulnerable students in our system.

When I discussed the bill with our Young Women’s Advisory Board, they were fully supportive of the legislation. Of the 21 girls on the Council, more than half reported that they had been suspended once or more; many for minor infractions ranging from dress code violations to talking back to a school official. Most of the young women that had been suspended believed they had very little recourse to dispute the suspension and struggled, in some instances, with the arbitrary enforcement of rules.

One story from our meeting relayed by one of our Fellows was truly heartbreaking and strikes at the core of why I believe this legislation is so urgent and necessary. One of our Fellows, now a recent graduate of Spelman College in Atlanta, Georgia and current DCPS school teacher was suspended for bringing a knife to school when she was in the 12th grade. When she went through the metal detector at her school in the District, the alarm sounded and her backpack was searched.

Upon further investigation, it was revealed that she was homeless, and worked nights at a local Burger King restaurant. Most nights she would get off work extremely late, and carried the knife for protection as she made her way from Burger King to the local shelter where she lived. She forgot to remove the knife from her backpack before school. Rather than expel her, she was given a 10-day suspension.

I think we have to ask ourselves, was this just? Knowing the situation, could there have been an alternative that would have kept her in school and engaged? More importantly, how can we work to ensure that we are meeting the needs of students and not applying a one size fits all solution to a problem that is multi-layered and complex? I believe the Student Fair Access to School Act of 2017 helps us do just that.

Thank you for this opportunity to submit this testimony. 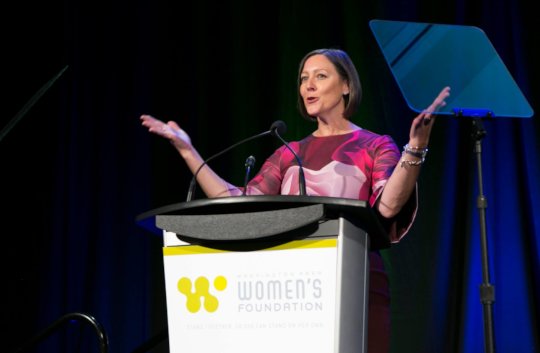 Our CEO at the 2017 Leadership Luncheon

Washington Area Women’s Foundation hosted its annual Leadership Luncheon on October 18, focused on mobilizing the community to work together to build economic security, greater opportunities and racial equality for our region’s women and families.  The Luncheon featured an address from Rosie Rios, 43rd Treasurer of the United States, and entertainment by Afro Blue – Howard University’s Premier Jazz Ensemble, Beltway Poetry Slam Team presented by Busboys and Poets and 16-year-old DJ Beauty and the Beatz.

The Leadership Luncheon focused on celebrating and highlighting the stories of young women and girls in the Washington region. Stories were woven together through video, art, music, spoken word performances and more. The Women’s Foundation launched its Young Women’s Initiative early this spring and from this, convened a group of 21 young leaders age 12-24 to form the Young Women’s Advisory Council (YWAC). The Young Women’s Initiative will push policymakers, business and community leaders and philanthropists to develop and invest in programs that address and eliminate racial and gender disparities.

“They’re not doing it alone. We’re bringing philanthropy, community, and government together to fashion the best way to invest in women and girls of color.  It won’t be easy,” said Jennifer Lockwood-Shabat, president and CEO of Washington Area Women’s Foundation. “Changes in mindset and policy must happen.  Systemic changes.  Seismic changes. “We’re just getting started. Join us because there’s no question that while we live in times that are divisive, we must be decisive in how we move forward, together.”

President and CEO of United Way of the National Capital Area, Rosie Allen-Herring said, “We’re also not sittin’ on the sidelines.  No, too much is at stake for every one of us not to stand up, and speak up.  And yes, to pony up too.” Allen-Herring also serves as Chair of the board of the Women’s Foundation and helped make the donation ask for the organization. “Everyone can contribute in some way. Everyone of us has taken a different path to arrive here today,” she said.

Yvette Butler, President of Capital One Investing, introduced Rosie Rios, 43rd Treasurer of the United States who served as the Luncheon’s guest speaker. Rios discussed the value of human capital investments and the lack of female representation in currency and statues in our cities. ” Where are the real women on our currency and in public monuments? We value what we see every day, but do we see what we value?” “If you see it, you can be it,” she said. Rios ended her speech challenging the audience to do more for women and girls by the year 2020.