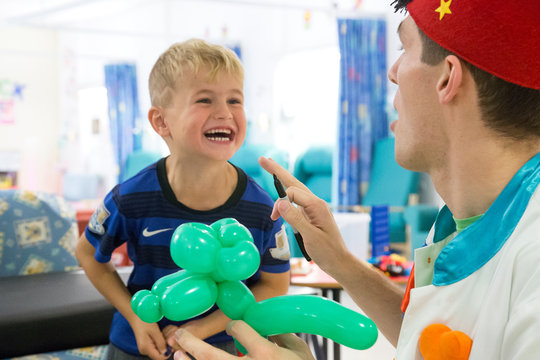 Dr Bungee on a hospital visit

You may have noticed we have now changed our name from Theodora Children’s Trust to Theodora Children’s Charity. We decided to rebrand in order to make our purpose clearer. In the past, the charity name has confused some people. We wanted to make it clear that we are a charity, rather than a trust that issues grants – which has never been the case.

“I just wanted to say a big thank you to the Giggle Doctors for cheering my baby girl up at LGI on Monday. Marianne is 9 months old and is usually a bright & breezy baby however due to a nasty virus it was sad for us to see her lethargic, working hard to breathe and very quiet.

When the Giggle Doctors visited the ward we had just found out that the doctors wanted us to stay in hospital overnight so I had started to worry about how serious things might be. Even though Marianne wasn’t very ‘with it’, I thought at least she would enjoy watching the Giggle Doctors entertaining the other children on the ward.

Dr Bungee came up to us & started to show Marianne some tricks with his hat & she watched him, intrigued. A few tricks later & she burst out laughing! It was such a surprise as I didn’t even think she had the energy to laugh. But this was just the start, as Dr Bungee carried on Marianne laughed more and more and by the time he made the bubbles squeak as he popped them Marianne was full on belly-laughing. It was such a gorgeous noise & its contagious effect had the whole room giggling along. It was such a relief for me to see a glimpse of my little girl & to know that for this brief moment she was having fun and that her body was feeling that lovely glow of having a good laugh.

Thank you Dr Bungee for your much needed dose of laughter, it certainly proved to be the best medicine for us on that day. We are home now and happy to say that Marianne is steadily getting better.”

“We all adore the Giggle Doctors. They are very much part of our team and indeed the hospital.”

“One little girl who had been in hospital for a couple of days only smiled for the Giggle Doctors. Also on a five bedded bay on the ward every parent commented on how good the Giggle Doctor had been during her visit to the ward.”

Thank you so much for making all these magical moments possible 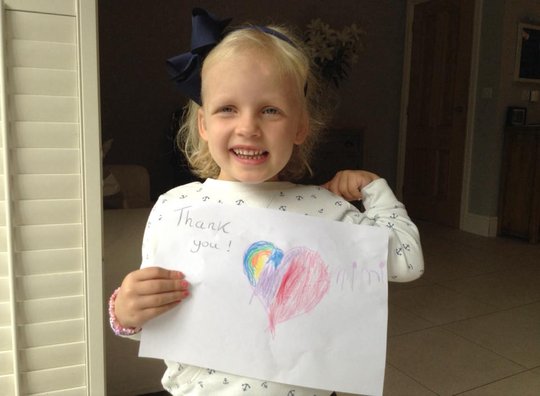 The work of the Theodora Children’s Trust makes such a difference to children and their families at such difficult times. We can’t thank you enough for your support.

Yvette C recently got in touch to tell us about how the Giggle Doctors helped her daughter Mimi:

Why was Mimi first admitted to hospital, and how did she feel?

Mimi was first admitted to hospital in June 2013. She had been extremely tired and used to sleep a lot. She then developed a squint and started to vomit in the mornings so we took her to the Opticians, who advised we take her straight to hospital. Mimi was sent for a MRI scan and the results showed a tennis ball-sized tumour in her head.

When did Mimi first meet the Giggle Doctors?

At first we spent a lot of time at Addenbrooke’s Hospital in Cambridge. It was there that we first met the Giggle Doctors. Mimi was only 3 and I think she was overwhelmed and confused about being in the hospital. She loved interacting with the Giggle Doctors though; it was a real treat for her.

After Mimi's initial operation in June we were allowed to go home and were out of the hospital for 3 months. However, in September 2013, another MRI scan showed that she had hydrocephalus and that half of the tumour they had removed had grown back! We were devastated and set to start chemotherapy ASAP but were told that first the hydrocephalus had to be sorted out with a shunt.

One of my favourite moments with the Giggle Doctors was on the day of this operation. Mimi and I were waiting for hours on the ward. Mimi was nil by mouth and very lethargic. That was, until the Giggle Doctors walked into the playroom and blew some magic bubbles for her! She was running around with the most beautiful big smile on her face. It turned out to be her last moment of fun before everything went wrong. In hindsight this became my most treasured Giggle Doctor moment. Mimi did not respond well after the operation and to this day we still don't know why this happened. She was having seizures and had to go into intensive care for a while.

After her stay in intensive care we were on the ward for 8 weeks. We saw the Giggle Doctors quite often there and it was lovely. When Mimi and I saw them go into another room first we would excitedly wait for them to come into our room. Mimi loved the balloon animals and would really giggle. I have a clip of it somewhere. It made me well up as it was like our 'old normal' Mimi was coming through all the misery she went through.

How did the visits change Mimi’s experience of hospital?

At the hospital you live from visit to visit. Doctors, Physios, Nurses etc..but the highlight for Mimi was always the Giggle Doctors, and it was the same for all of us. It helped us to have that little happy laughing moment once in a while, during a very worrying and stressful time.

We still make regular visits to Addenbrooke’s Hospital to receive chemotherapy, eye tests, attend endocrine appointments etc. Mimi still goes to the hospital in good spirits; not once has she told me she doesn't want to go. This is thanks to the Theodora Children’s Trust and the Giggle Doctors! 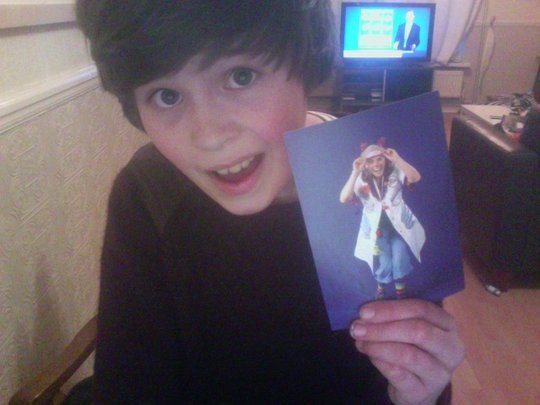 Harry with his postcard from Dr Dovetail

We receive lots of messages from parents of children who have met our Giggle Doctors. Harry’s mum got in touch to tell us about his visit from Dr Dovetail…

Harry has had problems with his teeth since he was tiny. The enamel did not form properly on them and he has had to have lots of work done on them, including lots of extractions of baby teeth. He has visited the Royal Alexandra Children’s Hospital in Brighton regularly for treatment.

Harry has had three general anaesthetic procedures in day surgery at the Royal Alexandra. The first time Harry visited the hospital he was really quite nervous as he was only 7 years old. He finds it really boring and being a growing lad really doesn’t like having to be starved or having nothing to drink for hours before he goes down to theatre.

Harry met the Giggle Doctors for the first time when his older sister was in hospital for a biopsy procedure back in 2008. The following year he met them again for his first procedure. He recalls it quite clearly as they had sticky bubbles which he found fascinating.

The Giggle Doctors really took Harry’s mind off the whole hospital experience; they made him laugh and really lessened his levels of anxiety about having various things done, such as needles, and having to talk to staff about how he was feeling.

At his last appointment Harry had a terribly long and tedious wait for his surgery and was feeling rather low after not eating for over 9 hours and not drinking for over 5 hours due to being bumped down the surgery list.

Dr Dovetail was absolutely fantastic with him, she was such good fun. Hopefully this was Harry’s last day surgery and she made it incredibly special for him. It’s not easy being 12 years old on a 4 bed ward with 3 very young children but she really took his mind off things.

The Giggle Doctors have helped all 3 of my children through the procedures they have had to endure. They make us all laugh and smile, and make the boredom of waiting much more bearable. Above all they make the children totally forget, for a short time, the reason they are there. We are so grateful for them at difficult times.

I was really looking forward to seeing the Giggle Doctors because they always make me laugh and smile and forget about everything that is happening, like the needles and waking up with blood in my mouth.  I saw Dr Dovetail this time and she took selfies with me! It was really funny because she used the remote control for the bed instead of a camera.  I told her all about breakfast and how mum made me have a shower because I was stinky!  Dr Dovetail thought it was funny.  I was really nervous because I was nearly the last on the list to go into theatre. The first boy that came back from theatre was screaming and it upset me so I left the ward and found Dr Dovetail. She was in the kitchen with another child and she did magic tricks which really took my mind off it all.  She is lovely and I want to say thank you to her because she gave me a postcard with her picture on it and signed it. It says 'Thanks for all the top tips on showering and eating cornflakes. Laters alligator! Love Dr Dovetail.'

Thank you for helping to make all these smiles possible.