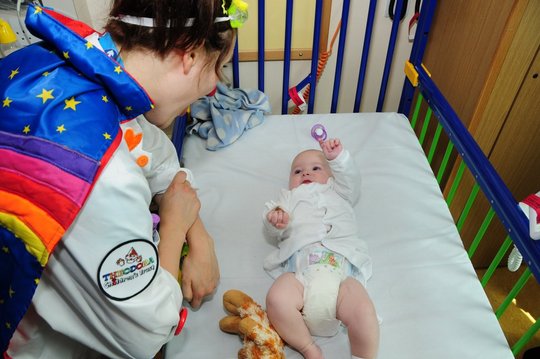 We've changed the name of our Clown Doctors to Giggle Doctors as people kept expecting 'circus clowns' which didn't accurately represent the true character of our performers.  Our trainees are at the final stage of their training programme - unfortunately one of our trainers for sick which delayed our aim of having them qualify as Junior Giggle Doctors in January.  Never mind, they'll soon be visiting 20,000 more children as of Feb / March.

In December, we had a TV appeal on BBC1 and BBC 2 - you can watch it on our home page until 26th January: www.theodora.org.uk

More than a million people tuned in and we have had so many phone calls and donations.  This year is a big one for us as we turn 18!  On the 5th March, we're hosting a birthday dinner and auction - just 4 tables left to sell!  We'll let you know how we get on in the next report.

On Tuesday, we an email from the aunt of a special little boy who is in hospital in Great Ormond Street and was due to have a 4 hour operation to get sensors inserted into his head. He has epilepsy and so far there isn’t any medication that has helped stop his seizures. He is going to be bed ridden for a good while as the plates have to be left in for up to a week and that’s before the 8 hour operation to remove the bad part.

"I have heard the giggle doctors really help with recovery and more importantly put a smile on kid’s and parent’s faces. He has now had the Op to put plates in and now looks like the surgery will take place on Thursday 12th January and we are all praying for the right outcome".

It just so happened that we were visiting the Great Ormond Street to see the giggle doctors in action so found out which ward the young boy was on and arranged for Dr Snug to pay him a special visit.

His mum said it’s the first time she has heard him have a belly laugh for ages, she sent a picture and he looks so happy.…"You do amazing work with the kids. He is now going tomorrow for the brain surgery keep your fingers crossed for him. You are all amazing"

Thank you so much for your support.  We really do appreciate it. 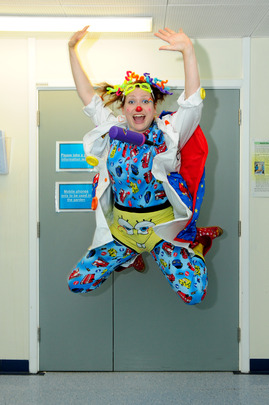 Our trainee Clown Doctors have nearly completed their training and are set to graduate at the beginning of next year, following final assessments by the trainers. It’s great timing as in 2012, Theodora Children’s Trust celebrates its 18th birthday! It will be fantastic to introduce a new team and be able to visit over 70,000 children a year.

We’ve also committed to Clown Doctor visits at a new hospital from next year: the Chelsea and Westminster in London. We’re so excited we’ll be able to bring fun and laughter to more children like Ben….

I first met Ben, a boy of 13, 4 weeks ago. Dr Fab was with me and as I’d learnt a new song, I borrowed her ukulele to play it to him. Ben got out of bed and started to dance around. I started to sing but he didn’t join in.

As I walked away his mum came to thank me…

‘My son got knocked down by a car and he hasn’t spoken since. We don’t know why or how long this will last for, but thank you for making him smile’.

On the fourth week I played again and suddenly he joined in, singing along to the words. This was the first time he had spoken since his accident.

As always we have had great feedback from the staff at the hospitals we visit. Jane Halliday from the Royal United Hospital in Bath emailed us recently to give us her feedback:

I am a Paediatric Nurse working in the Children's OPD at the Royal United Hospital in Bath.

Every week we are very fortunate to be visited by Dr Ding Dong both in the Children's Ward and OPD.

I just wanted to thank your organisation so very much for the joy that Dr Ding Dong brings to the department!  It is a real pleasure to watch her work and the super way that she interacts with the children.

Dr Ding Dong is brilliant at her job, and makes such a difference to the children's visiting the department.  She seems to lift the atmosphere and make children laugh and play along with whatever she is doing with them.

It is such a shame that we cannot have her visit us every day!

From everyone here at Theodora Children’s Trust, thank you so much for your continued support. 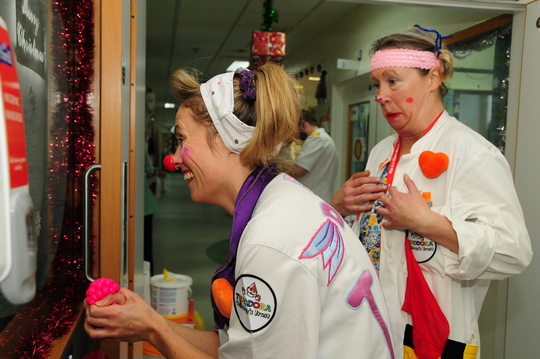 In our last report we updated you on the training of our new Clown Doctors and featured an interview with Kirsty Hudson. I spoke to her today to get an update on how her training is going:

How do you think you have developed since starting the training?

I feel as though I have come a long way in a short space of time though realize I still have a whole journey ahead of me with more to learn as I go. I have gained a much more heightened sense of awareness in the hospital environment, noticing more and being more conscious of children, staff and visitors all around me when I am working. This is something I am continuing to develop, along with practical skills such as magic which is currently my weakest skill. However, I have learned to make a selection of balloon animals which is another new skill for me since starting the training. I also feel that my openness and response to improvisation is continuing to grow. I have done classes on improvisation whilst at university and it feels so brilliant to put the skills I developed there into practice and just enjoy being able to play.

Our current Clown Doctors have been supporting the trainees every step of the way and as Kirsty mentions above, have been assisting them on their first visits to the hospitals.

Dr Hunny went to Bradford Royal Infirmary with Kathleen, one of the trainees, and sent us a lovely story which we would like to share with you:

I slowly peeked through the door where a little girl was sat down next to her father. We made eye contact and she smiled at me…I asked if it would be ok to come into her room and also if Kathleen (a trainee Clown Doctor who was observing) could join me too! The little girl nodded so we entered her room. I introduced myself and Kathleen, and asked the little girl her name. She told me but I called her ‘Princess’ as she looked like a little princess.

I picked up one of the little girl’s ‘Dora the Explorer’ slippers and pretended it was a phone! ‘Ring, ring, ring, ring’. (I’d pushed a phone sound effect on the gadget in my pocket). I placed the slipper to my ear and passed the little girl the other slipper. ‘Hello’ – she responded giggling away! We had a little conversation, including her Dad too, who also had the slipper to his ear! There was a lot of laughter whilst we were chatting away and I ended the conversation asking the little girl if she could help me do some magic. I pulled out of my pocket three yellow stars (sponges)! We gave the stars names (one being ‘Princess’, one ‘Dad’ and one my friend ‘Kathleen’!) The first star was placed in my hand (Princess) along with the second star (Kathleen)…the third star (Daddy) was placed into my pocket! I asked the little girl how many stars were in my hand – she responded ‘Two’. I asked the little girl whether we should try to magic the Dad star back. ‘Yes’ she said and we decided on the magic word ‘Abracadabra’ (after considering ‘Av a banana’, ‘Av a kebab’ and ‘Av a dab-dab’)! To the little girl’s amazement it worked, all three stars were together again! ‘How did you do that?!’, the little girl said with a big smile on her face. ‘I didn’t do it’, I replied…. ‘You must be magic’. We gave the little girl a big clap and she looked very pleased with herself. Just after us doing this, in walked three nurses with a trolley containing medication for the little girl - the nurses asked her what she’d been doing. I then said ‘how about she shows you, she’s very magical’ (the little girl agreed excitedly) This time we called the stars after the three staff nurses and we used the little girl’s hands to put the stars in, not mine.

We went through the story, placing two of the stars into the girl’s hand and the third into my pocket.

When the magic words were said she slowly opened her hand and was thrilled to see she had all three stars!! She was giggling away and the nurses congratulated her – she just looked elated and I truly believe it took her mind off what she was about to have done. Kathleen and I left her room watching the little girl still smiling away, Dad too, and the nurses.

From everyone here at Theodora Children’s Trust thank you so much for your continued support.