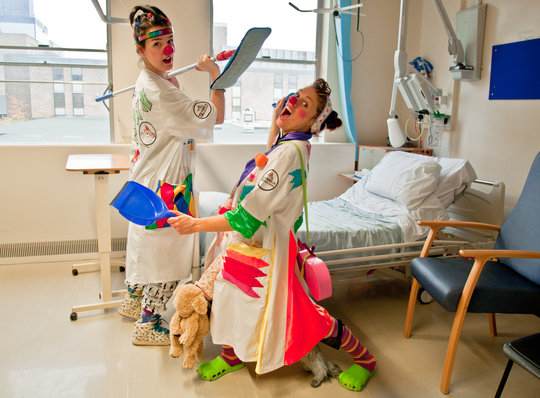 Dr I Spy and Dr Dovetail

This month we launched our very first Chores for Chuckles week (13th - 19th May) which was very exciting. During this week we encouraged people to carry out a chore (or chores!) in return for a donation towards the wonderful work that the Giggle Doctors do. It was lovely to see so many people rolling up their sleeves to help children in hospital.

Training is going well for our aspiring Giggle Doctors. Our 10 trainees are finishing their Giggle Doctor observations next month and will then start their assisted visits with senior members of the team. Our new intake of Giggle Doctors will allow us to bring smiles to thousands more children in hospital.

Below is a story from one of our Senior Giggle Doctors, Dr Jammi:

“Yesterday I worked in Nottingham. On the oncology ward is an area where children come and wait together with their parents. Some are sat on chairs, others in beds. Some are being injected with their chemo, some are awaiting consultations. Yesterday there were five children ranging from three to fifteen with their parents in this area. It was quiet when I entered, nobody talking, the mood heavy and fearful. I was afraid too. Nobody looked at me as I walked into the room, eyes remained glued to television screens, phones and magazines. One teenager was asleep in a bed.

I caught a glance from a teenage girl's mum and quietly introduced myself. A three year old boy in Superman pyjamas held on tightly to his mum as she tried to persuade him I might be fun. A teenage girl remained intent on writing on her iPad. I wondered aloud what she might be writing, a letter, an essay, a story or maybe she was composing a symphony or writing a film script. At this suggestion she raised her head and grinned at me saying that this was what she was doing. She was writing a film for her friends based on The Avengers.

The three year old continued to watch curiously and shyly, draped around his mum. A seven year old lying on one of the beds, who'd been absorbed by his television, said that he too had seen The Avengers. Spying a pile of pencils on the boy's table I suggested a duel between the two of us, he with a pencil and me with my toothbrush, maybe it could be an audition for the girl's film? She agreed. At which point the three year old decided to come and hand me the remains of his mum's pasta, at which point the whole room burst out laughing. He proceeded to want to stay as close as he could to me, giggling and skipping by my side.

There was only the lad who remained asleep and another teenager who remained absorbed in his DS who were now not engaged in the scene. I politely asked the DS boy whether he thought the lighting was correct to start filming, he raised his eyes and very seriously informed the room that the mimed lights, three and seven, were broken and somebody would need to fix them. A drink can became a walkie-talkie and a mechanic was called. He then said we might be able to work around the broken lights and said, "Action!" and clapped his hands together which the three year old loved and squealed with delight at.

The duel took place and filming and commentary ensued, the whole room actively engaged in playing out their imaginations. The atmosphere of the room had been transformed from fearful, lonely and quiet to a shared communal, playful space. The teenage boy remained fast asleep throughout undisturbed.”

Thank you so much for your support, we really appreciate it. 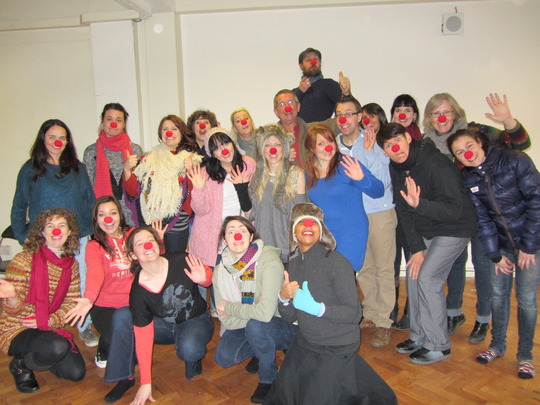 Our team on the first day of training

In January our new intake of aspiring Giggle Doctors began their specialist training. On their first day in the classroom the 10 trainees met some of our existing Giggle Doctors, took part in improvisation and team building exercises and began their artistic development. The trainees have now completed two modules and covered topics such as artistic play, child protection, infection control, bereavement, loss and coping mechanisms. They will begin their final module in March.

Each trainee will develop their unique Giggle Doctor character based on their own personality, before eventually being issued with a bespoke Giggle Doctor coat. Trainees also complete a series of observations under the supervision of senior artists before “graduating”.

We recently received a lovely email from a staff member at The Children’s Trust, which we would love to share with you:

“You all bring every child you meet a special memory and a few moments of relief from the stress and worry they might be going through. You bring smiles, happiness and love to everyone you meet and we are blessed and privileged to have you share our lives”

This year we are launching a brand new event called Chores for Chuckles week (13th- 19th May). During this week, people are encouraged to carry out simple chores in return for a donation. Top find out more you can visit www.theodora.org.uk to download a Chores for Chuckles pack.

From everyone at Theodora Children’s Trust, thank you so much for your support. 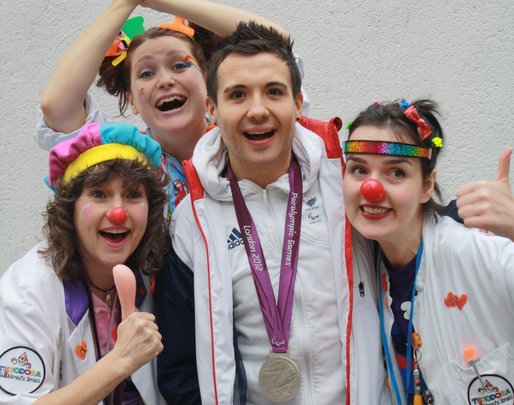 In November our Giggle Doctors at Great Ormond Street Hospital were joined by Double Paralympic Medallist, Will Bayley. Will joined Dr Snug as she brightened up the ward with her huge smile and colourful costume and used a magical mixture of storytelling, puppetry, music and magic to bring joy to the children’s bedsides. He involved himself in the visit as he helped Dr Snug perform magic tricks and shared jokes with the children on the ward.

Will said “As a child I spent many months at Great Ormond Street Hospital. I understand how daunting hospital can be for a child. I think what the Giggle Doctors do is fantastic and it’s great to see the impact they have on the children. The room really lights up when the Giggle Doctors are around.”

We would also love to share with you a lovely Christmas story we recently received from Dr Geehee:

“I was working at GOSH, on Fox ward, with Dr Dovetail and Dr I Spy. All the children on this ward are in solo isolation rooms due to the fact that they have had a transplant or are waiting for a transplant of some kind. We cannot go into the rooms and have to work through a window. As we are not able to go into the rooms I had decided to do a bit of funny carol singing with my new microphone. I had seen a couple of children and sung a few songs. I then came to the last room and through the windows I saw a small boy, about 4 years old, sitting on the bed with his head down. His mother, who was also in the room, saw me and drew his attention to me at the window. His eyes lit up. I said “Hello, can you hear me?” and he nodded. I then told him that I was a Christmas tree because I can get lights out of my ears, nose and mouth. I then began to produce lights. He found this funny and started to laugh and laugh and laugh. His Mum and the others in the room were laughing too. I knew that my job was done, wished him a merry Christmas and moved on.

I then went on to the next ward. Half way through my shift on the new ward I realised that I had left my microphone on Fox ward so I went back to get it. As I entered the ward a lady met me at the door and said "Thank you so much for making my Grandson laugh. His Mum and Dad had not heard him laugh for weeks. You really made him laugh. Thank you so much.”

Merry Christmas from everyone at Theodora Children’s Trust.