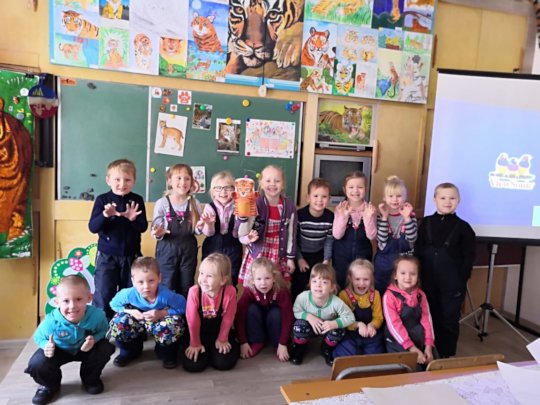 From November 2019 through January 2020 thanks to your support of our new project on ecological education we managed to fund the work of outstanding ecology teacher Valeria and covered her travel expenses. During reporting period she visited four remote villages of Krasnoarmeisky district and carried out special lessons for 118 children that live in close vicinity to Amur tiger habitat.

In November the teacher with young members of Namba eco-club visited Roschino and Krootoy Yar villages in order to give lessons for children aged 5-15. In Roschino, the lesson with kindergarten children was devoted to tiger cubs and outdoor behavior rules. At the beginning of the lesson, the children guessed riddles about animals and discussed how the world changes when winter comes. The teacher told about Amur tigers and dangers that the rare big cats face nowadays. Then, the children sang a song about a tiger cub and his mom and watched a video fragment about tiger habitat. At the end of the lesson, there was a discussion of basic outdoor behavior rules.

A lesson in Krootoy Yar village with pupils of 5th-9th grades was given to expand children’s knowledge about ecological problems on the planet and their reasons. First the children watched “Man” cartoon by Steve Cutts about man’s relationship with the natural world, talked about reasons for climate changes and the importance of nature conservation. Teacher also discussed vanishing of species and endangered status of Amur tigers. The children reflected on the possible solutions that could help conserve rare animals and their feasible contribution to this issue.

In December, the educator visited Boguslavets village and gave three lessons for 48 children aged 4-5 and 6 adults.

A lesson “Cats in our forest” was carries out for 16 kindergarten children aged 4-5 and two adults. The lesson began with riddles about big cats and a follow-up discussion about differences between wild and domestic cats. During the lesson, the children watched video fragments, presentations and cartoons about wild cats, learned about their food preferences, and dangers they face in the forest. The kids told that they would do their best to protect and conserve wild big cats.

Another lesson was devoted to the Amur leopard. 16 kindergarten children learnt how wild animals use camouflage to hide and hunt in the forest using the Amur leopard as an example. During the lesson, the children talked about camouflage as very important animal adaptation that helps animals both hunt for food and hide from predators, and watched video fragments in which animals chose to hide by finding a place with colors and patterns matching their skin or by altering the colors on their skin.

The third lesson was called “Tiger hunt”. The objective of the lesson was to inform the children about hunting habits of tigers. During the lesson, the children played interactive games and found out what animals are prey species of he Amur tiger.

On January 14, there was a lesson devoted to protected areas for 14 children aged 11-15. During the lesson, the children watched a video fragment about protected areas, discussed distinctive features of nature reserves and national parks, and watched a cartoon “What is a nature reserve?” Also, the children talked much about the Udege Legend National Park located in Krasnoarmeisky district and rare and endangered animals inhabiting the park. On the same day later, the educator gave a lesson “Safety around us” for 8 children aged 7-9. While playing, the schoolchildren learned that nature is much polluted as people used natural resources and never considered what harm they did to nature. The educator told about human behavior in outdoor recreation. At the end of the lessons, the children tried to formulate their ways to solve some ecological problems.

Also, a lesson “Treasures of Earth” was given to 12 children aged 7-9 in order to ingrain responsibility for the environment state and attract children’s attention towards ecological problems and ways for their solution. During the lesson, the children discussed causes for climate changes, energy conservation rules, and extinction of animals and plants. 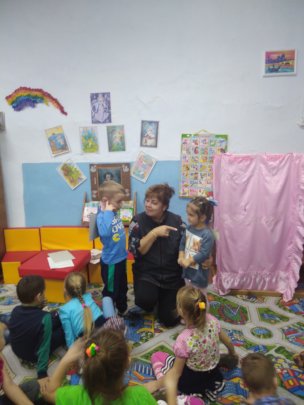 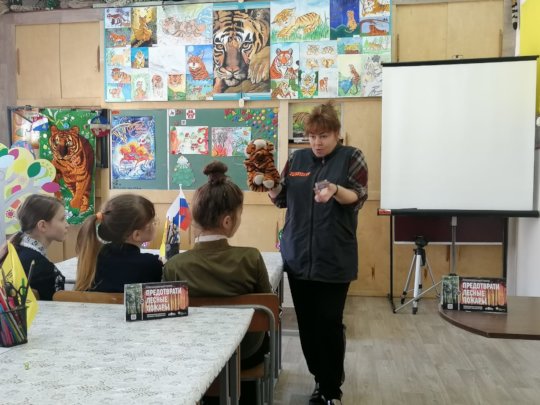 Patrol work from August through Octorber 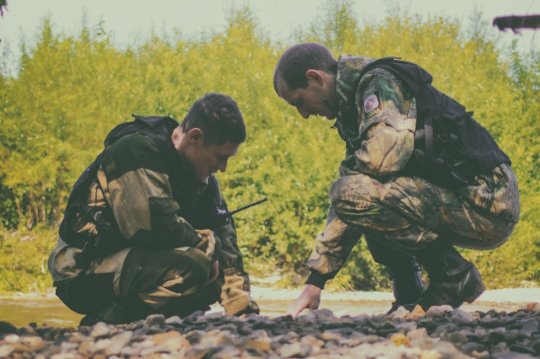 Thanks to your support the protection of the Amur leopard habitat was effectively carried out by the team of rangers. From August through October they conducted 74 anti-poaching patrols.

During August, the rangers mostly monitored three rivers – Barabashevka, Narva and Pugachevka. In the last month of summer many typhoons occurred in Primorsky krai causing an increase of water volume and level in rivers. Also, in August the rangers attended monthly staff training in order to revise environmental laws and discuss various situations that occur in the field.

Although August was too rainy and all forest roads were virtually paralyzed, it did not prevent the team from patrolling along the rivers. No violations were revealed. While patrolling, the rangers had to repair the patrol vehicle by their own.

In September, the team issued four administrative citations and removed a fishing net from the Brusya River. During the month, the rangers mostly did patrols along Barabashevka, Brusya, Narva and Pugachevka rivers. Rangers made a lot of ambushes in order to catch poachers.

On September 5, the team consisted of four members set forth on a patrol during which the rangers patrolled on foot and made ambushes near the Narva River. As a result, four men were apprehended for unauthorized presence. The rangers issues administrative citations upon the violators.

Another incident took place on October 17, when rangers of the Land of the Leopard detained a resident of Primorye in a national park near Barabashevka River with dozens of spawning chum salmon. The fishing in this river is completely prohibited according to the order of the Russian Fishery. The intruder was detained red-handed. Guards of the national park seized fish and fishing gear from the poacher.

On November 1, the hunting season for ungulates and fur animals began in the Primorsky krai. There are several hunting leases bordering the Land of the Leopard national park. Despite the presence of signboards with maps and name plates around the perimeter of the protected area, not all hunters stay within the borders set for hunting. Annually, violators are detained in the national park with firearms which according to law is equated with a criminal offense.

In November the team will be working in joint patrols with Police officers on the territory of the Leopard Land to protect the national park from hunters. They will also check the permits of hunters at the hunting grounds. 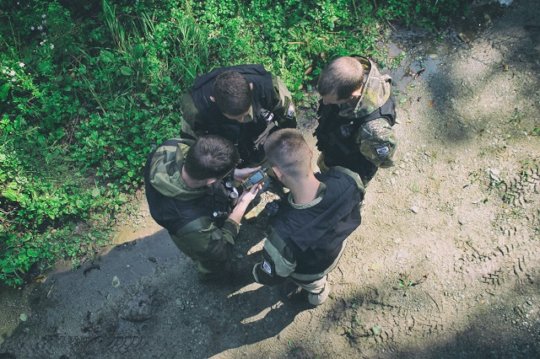 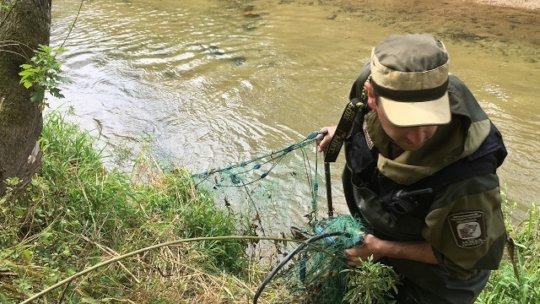 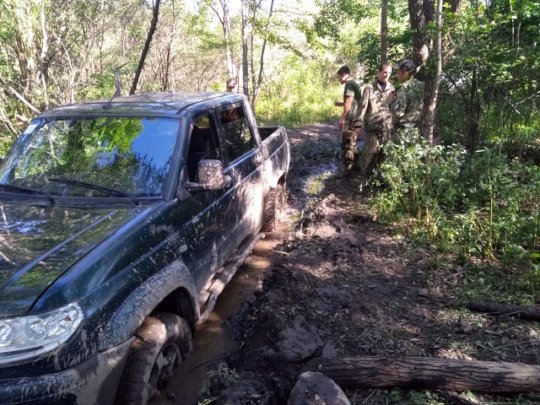 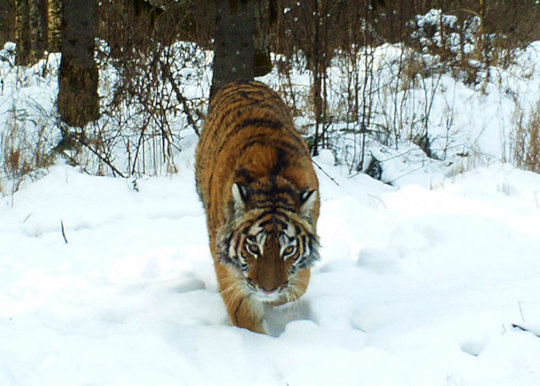 We are glad to announce that thanks to you our project is fully funded! Every donation made during this 8 years helped to save, nurse, rehabilitate, release and monitor conflict Amur tigers that got a chance to join the wild population.

When Centre for Rehabilitation and Reintroduction of Tigers and Other Rare Animals was at the design stage in 2011, its ex-director addressed to the Phoenix Fund requesting financial support for its construction. Soon after the first enclosure was ready its first patient tigress Cinderella was rescued. Our call for help at GlobalGiving platform allowed us collecting funds much needed for maintenance of the rehab centre and care for orphaned and sick tigers.

Since 2011 thanks to your donations TRNGO “Tiger Centre” has been provided with funds to purchase food and medical supplies for rehabilitated animals, to pay veterinarian’s services, to modify enclosures for animals, to install video monitoring system, to refit KAMAZ (track) and modify it into a mobile veterinary laboratory, to buy a drone for air observation of tigers kept at the Centre and monitor their movements after release into the wild, to cover field expenditures and fuel during trips to release sites.

Reintroduction of big predators such as tigers is a very complicated risky process and the Centre for Rehabilitation and Reintroduction of Tigers and Other Rare Animals became a pioneer in this field. Along with our supporters we want to give our thanks to the highly professional and passionate people who rescue cubs, work in the Rehab, monitor released tigers, run fundraising campaigns. Cinderella, Boris, Kuzya, Ustin, Ilona, Svetlaya, Filippa, Vladik, Pavlik, Elena, Saikhan, Lazovka and the cubs that were born in the wild from the rehabilitated tigers prove that this project is a big success! We can’t be happier for our first rehabilitated tigress Cinderella that over six years in the Bastak Nature Reserve has given birth to four cubs! For the first time in thirty years there are 13 to 15 Amur tigers currently residing in the Jewish Autonomous Region. The tiger population grew as a result of efforts to reintroduce tigers in the region so that they could form a stable group on the border of their historical range.

Now there are no tigers in the Rehabilitation Centre as the last residents were successfully released. Phoenix Fund has accumulated funds ($3,832.96) raised at GlobalGiving crowdfunding platform for future potential emergencies. We hope that you will further help us in our mission to conserve the rare Amur tigers and leopards supporting our other projects. Thank you!