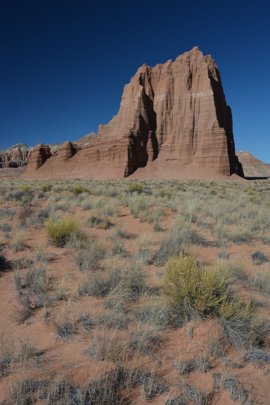 Grazing is not normally permitted in national parks, but the creation of Capitol Reef in 1971 grandfathered in livestock grazing across much of the park’s sensitive desert grassland habitat. This grazing has significantly impacted bighorn sheep, elk, mule deer, pronghorn, mountains lions and golden eagles as well as two endangered plants – Winkler’s cactus and Wright’s fishhook cactus.

Where conflicts between livestock and wildlife are prolonged and intractable, the National Wildlife Federation believes that public land grazing retirements can provide an equitable solution for ranchers and wildlife interests. In coordination with federal land managers,we negotiate with livestock producers to retire livestock grazing allotments that experience chronic conflict with wildlife,especially wolves,grizzly bears, bison, bighorn sheep. This market approach recognizes the economic  value of livestock grazing permits and fairly compensates producers for retiring their leases.This approach establishes an important new national model for resolving conflicts between livestock and wildlife habitat.

Now – for the first time – the National Wildlife Federation is on the threshold of permanently retiring a livestock grazing allotment in a cherished National Park.  Capitol Reef, in the red rock country of southern Utah is an American treasure, known for its amazing canyons, scenic vistas and abundant wildlife. As of April, 2018, we have reached an agreement with a long-time ranching family to remove cattle from nearly 75,000 acres of the park, a huge win for restoring the park’s unique and fragile ecosystems.

The allotment is one of only two remaining in the Park and will make a huge difference in preventing the extinction of  two endangered cacti species and benefit a myriad of native wildlife species. The Winkler’s cactus has a very restricted range with over half of the remaining examples occurring within this allotment and over one-third of the remaining Wright’s fishhook cactus occur on the allotment.Cattle grazing poses the largest threat and given that the cattle grazing will continue outside of this allotment retirement will provide a permanent refugia ensuring for the long-term persistence of these endangered plants. The balance between supporting livestock grazing and native plant and wildlife species is especially challenging in the arid southwest.

National Wildlife Federation staff have negotiated a price of $365,000 for the Capitol Reef rancher’s grazing privileges.  That is less than $6/acre, an incredibly cost-efficient strategy to permanently protect such an expansive piece of important habitat. We have already raised over $200,000 and are seeking to secure the remaining funds by August 30, 2018 in order to make our final payment and complete the transition. This allows the rancher to continue to stay in business by reinvesting his grazing into areas more suitable and for plant and animal species to recover.

Capitol Reef will be the NWF's first grazing retirement in a National Park and with your help, we can do even more. Thank you for your support and confidence in the work we do. 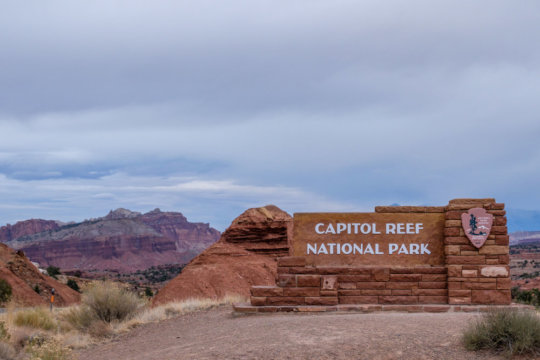 Capitol Reef is one of Utah's treasured parks 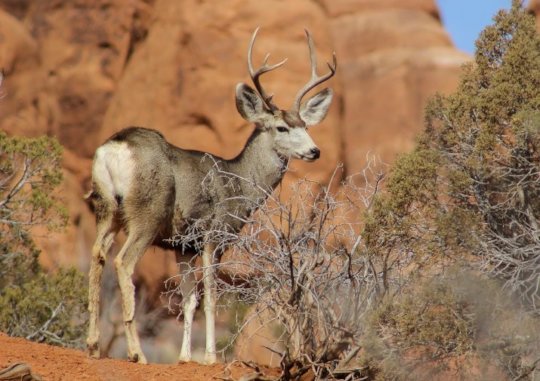 Beginning in 2002, the National Wildlife Federation has worked to eliminate conflicts between wildlife and livestock on public lands. The primary approach taken is to work with interested landowners, public land managers and conservation partners to retire grazing allotments identified as providing the greatest opportunity to reduce chronic and persistent conflicts with wildlife. These transactions provide compensation to willing ranchers, a non-regulatory market-based solution that is a win-win for private landowners, public land agencies and wildlife.  As noted in a past reports, our Adopt a Wildlife Acre program has protected well over 1.1 million acres of habitat primarily in the northern Rockies. Motivated by the success of this innovative conservation approach, in mid-2017 the National Wildlife Federation expanded the program to Colorado and Nevada where are exclusively focusing our efforts on reducing areas of conflict between Bighorn Sheep and domestic sheep.

In Colorado and Nevada, the iconic Bighorn dwindled to a small fraction of their original range largely due to impacts associated with domestic sheep herds. Specifically, Bighorn sheep are highly susceptible to a number of diseases (primarily several forms of pneumonia) carried domestic sheep. Over the next ten years Our Adopt a Wildlife Acre program in Colorado and Nevada seeks to restore Bighorn sheep populations in these two states.

Since bringing on board a new employee to staff the program expansion, we have a number of ongoing and very promising conversations with several ranchers in both Colorado and Nevada. In fact, we are very close to finalizing agreements to retire five sheep allotments in San Juan Mountains of Southwestern Colorado. These allotments are located in the middle of a very high priority Bighorn herd. Removing sheep from this area will go a long way towards reducing the risk of disease transmission and stabilizing a herd that has already been seriously impacted by disease. Together, these five grazing allotments comprise an area of 27,000 acres of critical Bighorn habitat and will cost an estimated $130,000. We are beginning fundraising efforts to pay these two ranchers. At less than $5 per acre, we believe this is an incredible value for protecting one of Colorado’s highest priority Bighorn Sheep herds. This will be the first of what we expect to be many such grazing retirements in Colorado and Nevada to protect Bighorns and we are grateful to our supporters for investing in this innovative conservation solution. 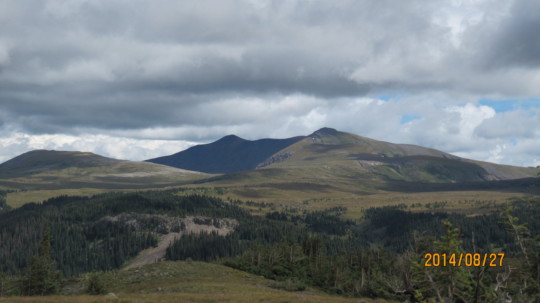 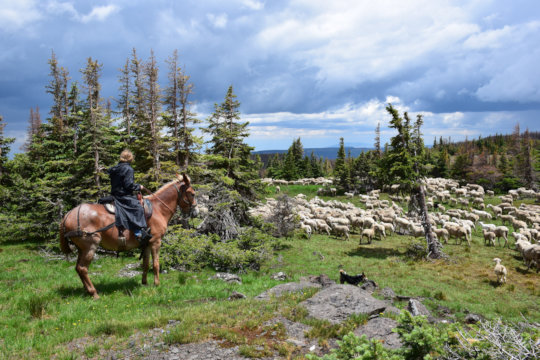 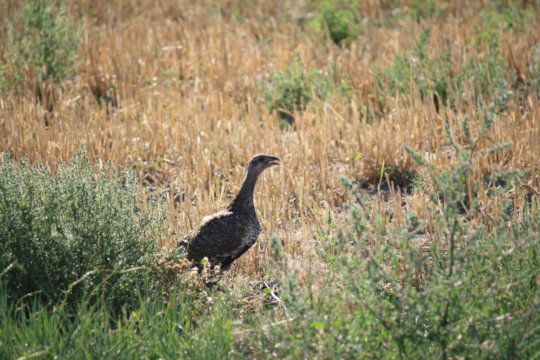 Much of the CMR Refuge is critical for sage grouse

The National Wildlife Federation has a long history of working to resolve livestock / wildlife conflicts on the 1.1 million acre Charles M. Russell (CMR) National Wildlife Refuge in northcentral Montana.  The refuge is home to abundant populations of grassland birds, pronghorn, elk and mule deer.  Grazing has a long history on the refuge and we've been working cooperatively with ranchers to make more room for wildlife. The refuge is managed by the US Fish and Wildlife Service and is part of the National Wildlife Refuge System and managing for healthy and abundant wildlife populations is the first priority on the refuge, however, working cooperatively with neighboring ranchers means high quality wildlife habitat doesn't end at the refuge boundary. NWF has two priority programs on the CMR refuge.  The first is actively working to reduce livestock fence collisions with sage grouse by strategically placing visual markers so fence strike mortality is minimized.  The second is working to retire cattle grazing allotments on the refuge to minimize conflict with wildlife.

In October we negotiated an important cattle grazing agreement on the east end of the refuge on the 2,200 acre Bay Pasture on Bobcat Cr.  Our goal is to provide the US Fish and Wildlife Service with increased flexibility in their grazing program by reducing the overall number of livestock on the refuge.  This is only done by working with willing ranchers and developing agreements for them to waive their grazing permit. We have fundraised much of the cost of this effort, but still have $5,000 yet to raise to pay for this grazing retirement.

NWF does not believe all livestock grazing is a negative, but in the face of climate change, increased drought and vulnerable species, reducing grazing pressure allows native plants and wildlife to gain a foothold.  In fact, the northern Great Plains evolved with significant grazing, in the form of millions of bison grazing the prairie.  Bison, however, graze much differently than livestock, creating a patchwork of high and low intensity areas that are a necessity for a variety of grassland bird species, including sage grouse, spragues pipits and McCown's longspur .  NWF's long term goal on the CMR is to restore an ecologically significant bison population (<1000 animals) to the refuge to fulfill this critical ecological niche, however, in the meantime we are working cooperatively to change the current cattle grazing regime to allow for greater species diversity. 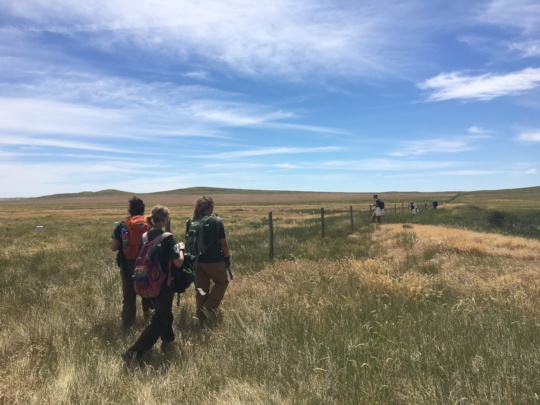 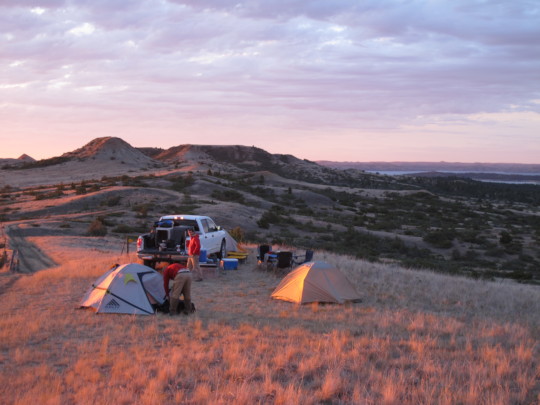 Camping on the CMR Refuge for field work 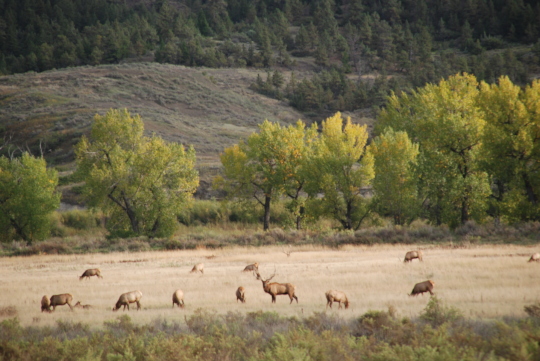 Elk are abundant on the CMR Refuge
‹ 1 2 3 4 5 6 7 8 9 ... 14 ›
WARNING: Javascript is currently disabled or is not available in your browser. GlobalGiving makes extensive use of Javascript and will not function properly with Javascript disabled. Please enable Javascript and refresh this page.