Bipul Thapa's Cycling Adventure in Delhi - A First For Nepal! 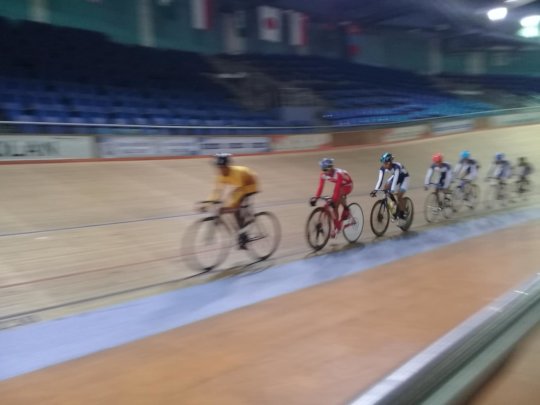 As many of you will have read in our previous reports we have developed over the last few years our Ride for Life programme. This programme has meant hundreds of our students have learnt to ride a bike confidently and safely. Our main reason for this programme was to find a way for students to cut down their journey times to and from school which for some could be up to 4 hours, but never did we imagine it would develop into such a daily part of school life. The bikes are not just used for journeys to and from school but are also used for P.E. classes, bike maintenance workshops, school trips and for careers development for our older students.

These classes are met with excitement and enthusiasm by our students and we often receive feedback from them about increased confidence from learning a new skill and being proud of their achievements. For most of our students this is the only chance they will get to learn to ride a bike. Our committed facilitators pass on their passion for cycling onto our students. And, over the last 2 years, one student in particular, Bipul Thapa, has developed a real love for bikes. After competing in numerous local events set up by our programme, Bipul won a fully funded event place to train at the velodrome in the World Cycling Centre, Satellite, in India for 3 weeks. He was the only one from Nepal attending, the first Nepali at junior level ever to do so, and trained alongside people from all over the globe including India, Sri Lanka, China , Bangladesh, Myanmar, Malaysia, Uzbekistan, Singapore, Iran, Macau, Tajikistan, UAE. Bipul represented Nepal earning 2 points for their Nepal's international rankings.

This fantastic opportunity now enabled Bipul to learn many new skills and techniques which now helps him with his cycling progress. The training included Gym Sessions, Track Sessions, Track Skills, Watt Bike Training, Watt Bike protocol Tests and Track Testing. It was an incredible trip that helped Bipul to see the potential and opportunities that cycling could give him. Bipul hopes that he can continue with his passion for cycling and carry on competing in events. All of this was made possible thanks to your continued support. Bipul can now go home to his fellow students at Kushadevi and tell them all about his trip. Bipul has been able to inspire other students by showing them that hard work and focus can really lead to amazing things.

The fact the the opportunity came about from his school has also helped us to raise the kudos and positive reputation of what can be achieved when attending a government village school, going some way to address the prejudice and marginalised status faced by children like Bipul.

We are all so proud of Bipul and his amazing achievements and look forward to seeing where his love for cycling takes him. We will continue our Ride for Life programme and we hope that more students like Bipul will grow a love for cycling and the beautiful outdoors.

Thank you again for your conitnued support to make projects like this possible at Kushadevi School. 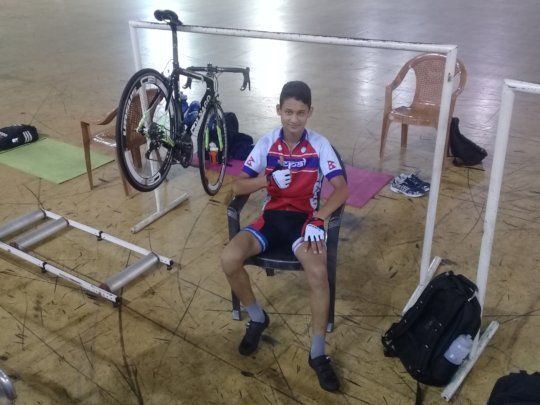 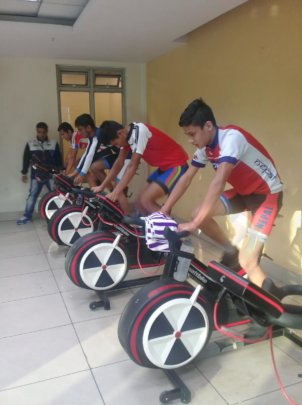 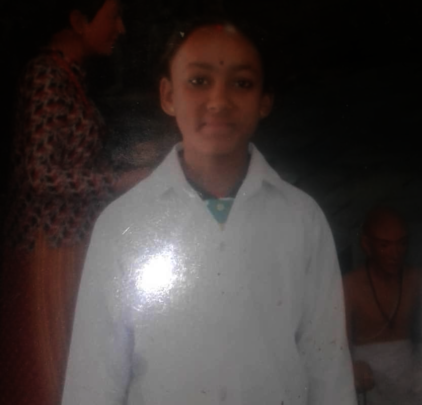 Bina join Act on Education in 2011

We thought for this report we would tell you story of one of our teachers, also one of our earliest students. This is because we thought it would explain the amazing difference supporting Freedom to Learn can make, not only to an individual, but the 'ripple effect' that can have on a whole community. This is the story of Bina.

Bina was one Freedom to Learn’s first students in Nepal. She is from a poor family in a rural village in the Himalayan foothills, the eldest of 4 siblings, 3 sisters and ‘only one a boy’. In Bina’s community this was regarded as extremely bad fortune. Back in 2011 at the age of 12 she was not regularly attending school and had fallen far behind, destined as so many of her peers to leave school within the next year and be readied for marriage. As a young girl she was expected to carry out the chores at home; cooking, cleaning and looking after smaller children. Her family didn’t regard school as important for girls, so neither did Bina.

As part of our Act on Education Programme Freedom to Learn teachers spent a few weeks visiting Bina’s family, slowly persuading them that if she could get an education and pass her exams she could help her family much more in the long term. They finally agreed Bina could join the newly set up ‘Act on Education’ classes at school, supporting Bina with her self-confidence, catching up with school work and engendering the feeling that she belonged to the school community again… despite “being a girl!”.

She continued on the Act on Education Programme for 2 years, her confidence flourished and her learning excelled. Attending school regularly at this point, she passed all of her exams in 2016, and was accepted to do a Bachelor's Degree in Education in 2017. At the same time, Freedom to Learn set up their Model School Programme at Kushadevi School where Bina began working as a teaching assistant earning a reasonable wage and gaining valuable work experience. Qualifying this year she has now joined Freedom to Learn’s team as a primary school English Teacher.

She is hard working and committed, understanding more than most the difference an education can bring. Her qualifications and job has of course brought home more money, which has eased the family’s financial situation and taken the pressure off the younger sisters to work so that they too can now get an education. It has also served to change her parents’, and their neighbouring families’, perspective of school, as they have watched Bina flourish into  a successful young woman.

We asked Bina to write a few words to you, she says, “I love the children at school, I can understand the families here as I am from the same community, the same background. I can relate to the parents and show what their children coming to school will do, not only for the children, but for the whole family”

Kushadevi's headteacher says: “Bina has a number of skills and knowledge particularly in how to  encourage children and staff to work together, to be loving and help each other. I think this was learned directly from Freedom to Learn’s Act on Education workshops. It means she has been a boon to the team. I remember her as a girl, my goodness, she is very different now!”

Thank all of you for your suport through global giving to Kushadevi School. 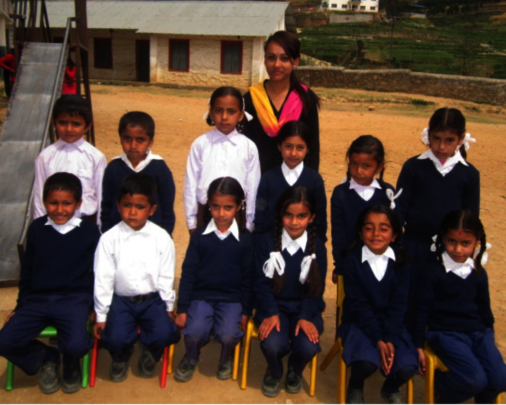 Bina with her class this Summer. 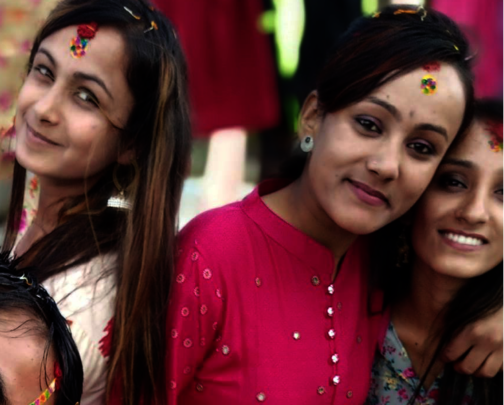 370 Children are Learning Creatively as the School Improves! 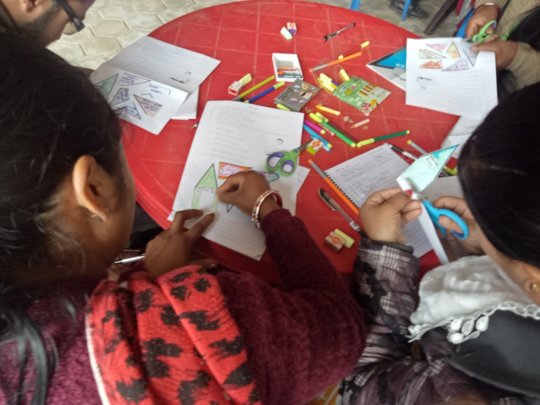 Maths teachers learning at a training Day in June.

Lots has been going on at Kushadevi thanks to the generous support of our Global Giving donors! Thank you for continuing your donations - we couldn’t help the children gain better access to and quality of education at Kushadevi without you. Thank you. Here are a few of the things your money has contributed to...

Since May we have been working hard to ensure that as many teachers are trained in 'Creative Learning Techniques' as we can. And it is now paying off. 27 of our teaching staff have been working with our trainers from the renowned Rato Bangla Foundation, including 3 full day workshops and monthly 'in-class' consultations and support to put what has been learned into effective and regular practice in the classroom. Children are showing increased interest, especially in maths, where games and exercises have become a regular part of the their learning experience. When we asked Dixit from Class 7 he told us "I like the puzzles we have to do, I do them with my friends and we nearly always get them right now!"

Ride for Life, our bike riding programme, has seen more that 50 young people riding in Kushadevi. Girls especially are enjoying the higher status this has given them within the village. The bikes in school have come with many benefits; from PE classes and fitness, to topic based learning. One of our young riders, Priti, tells us a good example of this: Priti’s younger sister (aged 10) was stopped by her parents to attend school last year so that she could work in the family street shop. However, this term they are insisting that she go back to school as she will get to use the bike, which not only helps her get to school but also is useful at home for errands and for the shop to deliver items to the surrounding homes. Once the parents understood the benefits, their perception of the school and of education for their daughter changed, ensuring another girl now has the opportunity of a quality school education who otherwise would have been in trapped in child labour.

Younger children, who are not yet able to ride the bikes have been learning the mechanics as part of their science learning, another form of creative learning that gets the children excited about school, and increases their understanding of mechanics from a young age.

With our older students we have also devised and facilitated a number of events including drama performances by the children and local actors about the consequences of Gender Discrimination at school and in the home, and steps to take to overcome it. Performances have also included the difficulties that some of the children face in learning at school, and we have used the events to work with school management and teachers to find ways to resolve these issues. This has included improving toilet facilities and increasing the number of ‘tiffin’ support we give to students, who otherwise go a whole school day without food.

As we previously reported, this Model School Programme is being taken into a number of local schools, 3 in particular have been working hard to replicate our model, and our team of teachers and school management have visited to consult on how they make the improvements needed to ensure their schools become a central heartbeat of the community they serve.

So a massive Thank You! We couldn’t do any of this without the support of all of you. In order top continue running Kushadevi we need ongoing support, so a huge thank you to those of you who have set up a regular donations. This helps us to sustain our operations at Kushadevi. Please spread the word to see if others might be interested in helping 370 children at Kushadevi School. Again, Thank you. 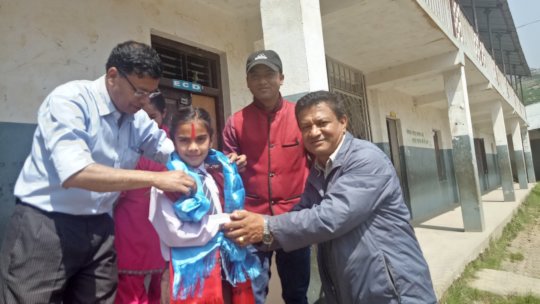 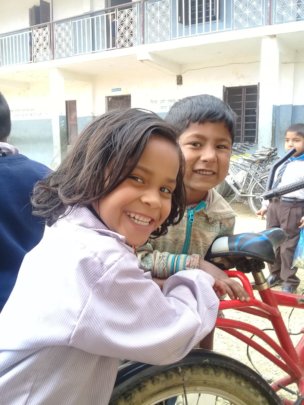 Classes 3 and 4 learning science with Bikes. 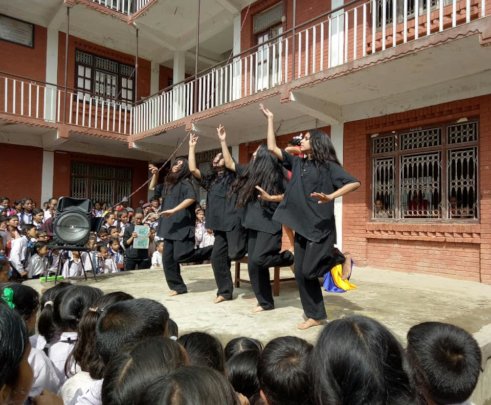 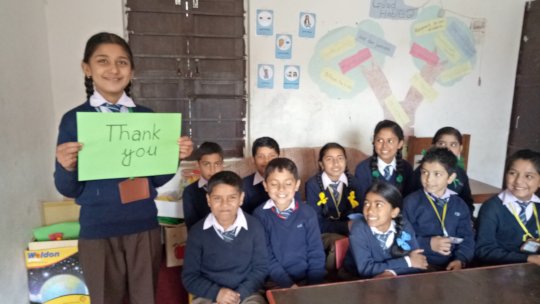