Whilst access to food is a recognized human right, it can be easy to forget that it continues to be a privilege for many families around the world. Food security is an ongoing challenge to OVC families in Bukatube. In February 2019, we had the opportunity to lease land for our OVC caregivers to provide them with the opportunity to improve their food security in a sustainable way. They were very excited at the prospect of improving their capacity to feed their families and earn a living. Currently, some families face significant risks of malnutrition and under-nutrition due to a lack of sustainable, quality food sources.

“I can’t thank enough Community Concerns for having thought of us... getting us land to plant food crops. This is going to save us from food insecurity”

It was decided by a majority vote that the caregivers would grow soya beans and groundnuts, as these crops are best suited to the sandy soils in the area. After obtaining the land, an agronomist was hires as a consultant to provide training in effective ways of growing soya and groundnuts in local conditions (as seen in the pictures below). The participatory training engaged caregivers in learning better farming practices such as seed selection, spacing, planting, weeding, pest handling, harvesting and post-harvesting handling. Going forward, we believe that this has great potential to address food insecurity amongst OVC caregivers in Bukatube; a perspective shared by participants:

“I believe this project is going to not only change our food security status but also our ability to save... I am sure that we shall be able to save money after selling the soya beans and groundnuts. Besides, we shall have to save more as our expenses on food reduce…”

Despite a delay in the rains for this growing season, caregivers are optimistic about the potential of the initiative and the opportunity to reap a harvest for their families in the coming months.

Project ends in one community and starts in other 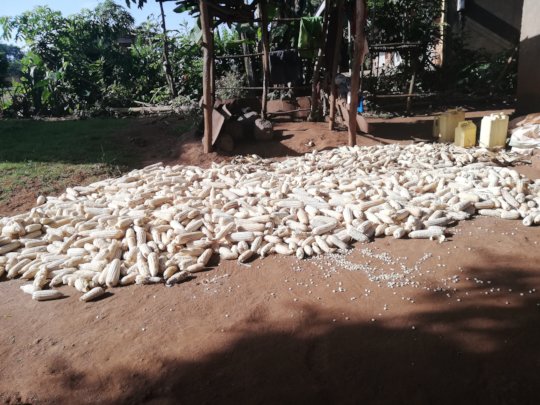 After 12 months, the food security project started in Baitambogwe, Mayuge district among 16 families has had a great impact.

Majority of the beneficiaries have been able to improve on their food security. Many of the OVC caregivers report having enough food to feed their families. Between January and December 2018, caregivers harvested more food stuffs such as soya, maize and Orange Fleshed Sweet Potatoes (OFSP) and beans.

There have also been increases in saving due to improved household incomes from sale of surplus produce which have facilitated business initiation and growth.

“For me, I used not to be able to afford to buy food most of the time but I’m glad I no longer have to buy food, at least I can get it from the garden that community Concerns Uganda rented for me. Because I was saving some money, I will be able to retain the piece of land by paying the owner more money.”

“Now that Community Concerns Uganda will not hire for us any more land, I’m glad I have been empowered economically and will be able to pay more money to hire the piece of land.”

Some of the other beneficiaries have been able to use the project to support their families and also pay school fees for their children.

“I’m so happy that I was able to harvest 300kgs of maize which I sold and earned Ugsh 200,000. I’ll use this money to pay part of the school fees for my child who is joining secondary school. I’m still eating the sweet potatoes and the cassava is still growing. At least the interest I earned out of my savings, I will be able to pay more money to the owner of the land.”

The whole of last year another community was expectant that we would hire for them land and be able to give them seeds so that they can grow food but due to the unlimited resources, it was not possible but this year we told them that it was going to be possible, this brought joy to them.

“I’m so grateful that community Concerns will be hiring for us land so that we can grow food for our families and be able to sell the surplus.”

More than one meal a day

All the 16 households that we started with  in this food security project are now able to have more than one meal a day.

"We used to have 1 meal in a day.....but that changed when Community Concerns Uganda initiated this project. I got 85kgs of soya last season which i sold at USH 1,500 each Kg. I used the money to start up a small business which has helped me to buy scholastic materials for other children not sponsored by Community Concerns Uganda and buy sauce to complement the food harvested." Isma

I got 40kgs of maize that we still eat as posho today. And up to now, we are still harvesting the sweet potatoes for last season.

Honestly, this project has changed our households. I have planted maize, potatoes, and soya for this season. But the weather is so bad this time.... anyway, i hope to continue renting the land where i planted the potatoes.

Growing of sugar cane in this area has made renting land to small-scale farmers almost impossible due to the high prices.

"Before this project started, i could not afford money to rent land for growing food. I barely had what to eat at home, but thanks to Community Concerns Uganda, i now have what to eat. I got 65kgs of soya and 45kgs of maize last season. I sold the soya and bought more food and other seeds (Groundnuts) for this season.... we now have at least 2 meals each day."  Bosco