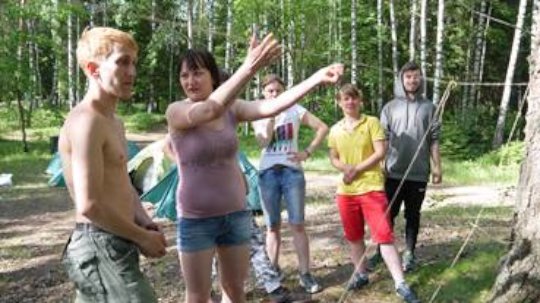 Lena with her friends on a hike we organised

For us individual and group support complement each other perfectly.  Many of our young orphanage-leavers first have individual support and then join the group when they feel confident enough.  Alternatively, they might join the group and then ask for individual counselling when they start to realise how deeply their childhood trauma has affected them.

Lena joined us two years ago after she split up with her boyfriend.  She had realised that she was getting tetchy and tearful and was going out drinking more often.  At around this time, Lena lost two fingers in an industrial accident.  Her then boyfriend didn't visit her in hospital, and this was when she decided to end their strained relationship. Not knowing how to live alone, she said, "I didn't just lose myself, but my home too.  I would do nothing but work, even putting in extra shifts just to avoid having to think about anything."

She talked about her mother, who was deprived of her parental rights because of alcoholism.  As a child she went to live with her aunt for a time because her mother wasn't even feeding her.  Her aunt also wasn't able to look after her and she ended up back with her mother without even a bed to sleep in.  She doesn't remember being taken to the orphanage aged 12.  As she says, her memories of that time are "all jumbled."  Now she has begun to forgive her and they now see each other frequently.

Her injury was also a difficult subject.  Through a year of counselling, Lena continued to bandage her hand and to feel self-conscious about it.  Gradually, through individual counselling, Lena began to believe in herself.  She also started coming to group sessions and eventually took off her bandages so that her hand could be seen.  She is now a valued member of the group, a friendly, attentive and supportive friend.

She has realised that her previous employer was exploiting her and has found a new job as a cook at a fast food restaurant.  "It's much safer there and I can chat to customers.  They see my hand, but they don't ask about it, and they don't laugh or stare."

And, she is in a new, warm relationship and is waiting for her boyfriend to come back from military service.

After a series of abandonments, as first her mother, her aunt, the orphanage staff and then her ex-boyfriend were unable to show the love she needed, Lena now has a new start.  She is rebuilding her life on firmer foundations.  She says, "I almost don't notice but I look different now.  My appearance itself has changed.  Before I didn't understand myself.  I didn't even feel capable of being happy".

Earlier this year we told you about Tomash, who felt suicidal when he moved into his own small flat.  We were able to support him individually, but it also helped him greatly to hear from the group that his peers had felt the same as him, and perhaps still did.  Now Tomash is successfully attending college and has taken part in a show about the experience of leaving an orphanage with his amateur dramatics group.  He invited all his friends from our support group to the final performance.  He said, "I wish everyone who had travelled this path could see the show because it's not always easy to tell your story."

As we look towards the new year, we wish all those who have left orphanages, or will do soon the very best.  We are reaching a significant proportion of those leaving in our city, and we train staff in other organisations too.  We would wish that every orphan could find the support they need to recognise their strengths and form satisfying friendships and relationships. 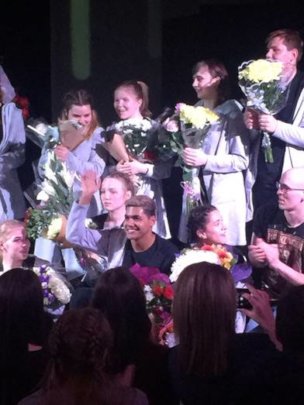 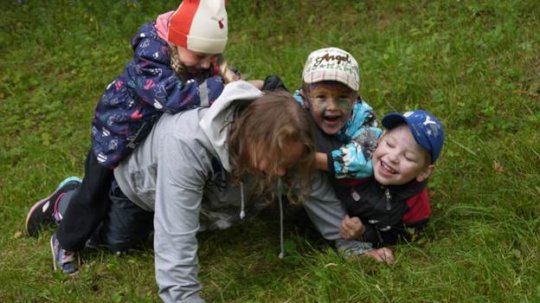 Sveta playing with the children

It's a grey day, and despite the holiday season, it's still lovely to look back at the summer and remember what it was like to spend the whole day outdoors.

Our summer camps are bright highlights for the parents in our support group, and they and their children remember them through the year.  Of course it takes time and effort to change habits and improve relationships, but we are with them to help them build on the lessons learnt at camp.

Sveta was learning how to play with her son in the summer.

"I was sure that my job was to watch my son, to make sure he stayed save and that he observed the rules when he played with other children.  To be honest, it did my head in.  I used to stand like a watchman, all the time watching.  It used to give me a headache."

We suggested the parents try to interact more with their children.  Sveta remembered a few games and suggested she play them with the children.  She was really pleased to see how keen they were to join in, but it often ended in shouting and fighting.  Sveta brought her troubles to the group discussion.  The parents came to the conclusion that adults need to gently guide the games.  The group helped Sveta think of some games that were more age-appropriate for her 5-year-old son, like hide and seek.  Games with simple rules which the children find easy to follow.  Her son really enjoyed his mama's initiative and started to play more harmoniously with other children and even to ask others to play.

At a time of year when we are encouraged to think that we can buy memories, it is good to remember that a simple game of hide-and-seek can also become a treasured memory.  In the new year we will be starting to plan for our summer camps 2020.  We will be selecting families, usually a mix of old-hands and first-timers, all committed to deepening and strengthening their relationships next summer.  We will keep you posted about how we get on. 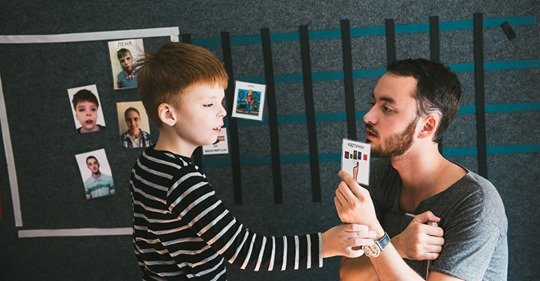 As you will know by now, if you have been following our project for a while, there are two sides to our work.  We support a relatively small number of young people and children with disabilities that affect their ability to communicate, and we develop tools and techniques that can be used across our country by families, professionals and disabled people themselves.  Of course these are related.  When we find something that works well for our young people and families, we want to share it!

This month we have news on both fronts.  First of all, we are celebrating the launch of a Russian language version of Picto-Selector.  This is a free online resource that provides pictures that can be used in a variety of ways and particularly to build visual timetables.  These are so helpful for many of our young people, particularly those who are on the autistic spectrum.  A visual timetable helps them to understand what is going on around them, and what they should be doing at that time.  It helps to learn new routines and skills by giving a visual representation for those who find it hard to understand and remember verbal instructions.

Picto-Selector was developed in the Netherlands by a parent of a child with a learning disability.  We have been working on a Russian translation to make the tool available to families across Russia.  Although there are other options out there in Russian already, this resource is free, making it the only affordable option for many families who really need it.  This month we are running seminars to show families and professionals how to use Picto-Selector.

On the other side of things, we have been celebrating Halloween.  We love our young people to feel included, and that means joining in with holiday celebrations.  With a little creativity, we have made some ghoulish sensory experiences that everyone can appreciate.

Thank you, as ever, for your generosity, which helps make this work possible. 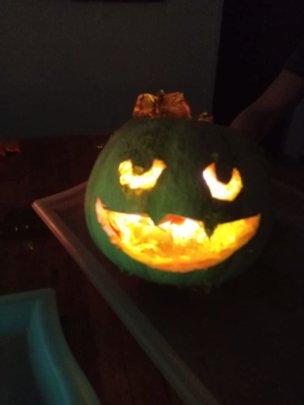 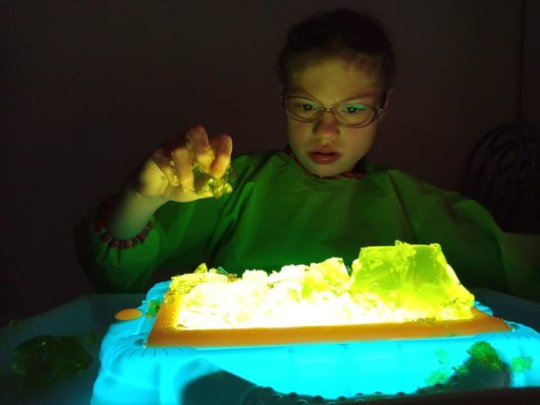 Halloween slime
‹ 1 ... 5 6 7 8 9 10 11 12 ... 69 ›
WARNING: Javascript is currently disabled or is not available in your browser. GlobalGiving makes extensive use of Javascript and will not function properly with Javascript disabled. Please enable Javascript and refresh this page.