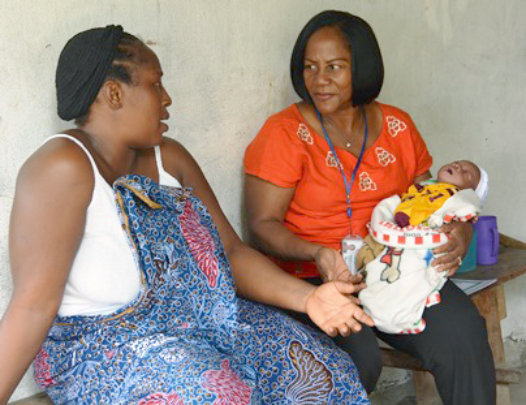 “I live in Voinjama, Lofa County.  I am a professional nurse. I came in contact with the Ebola Virus Disease (EVD) in July 2014 when my husband came home from work one day feeling sick. He showed some symptoms of Malaria.”

This is the account of a 40-year old woman named (M.K.D.)
She and others are being identified by their initials in order to protect their identities.

M.K.D.’s source of transmission is not unique to her alone. At least two other female survivors, including  43 year old B.T. and 37 year old B.K., have similar source, too.

M.K.D., a professional  nurse, took her husband to the hospital and had his lab tests done. He was given treatment for Malaria and Typhoid. But M.K.D’s husband’s condition did not improve.

“I started getting worried. I asked him if he had come in contact with anyone, who had Ebola. He denied. After the treatment at the hospital, his condition did not improve. He got so weak. I decided to hang a bag of IV solution on him so that he would gain some energy,” she said. “In the process of starting the IV line, his blood flashed all over my arm. I washed it with soap and chlorine solution after I had com-pleted hanging the drip. That is how I got infected with the Ebola virus.”

Sadly, her husband died two days later at the Foya Ebola Treatment Unit (ETU). After his death, M.K.D. became sick and was diagnosed with Ebola. “I survived because I reported myself early to the ETU”, she said.

Unlike the other two survi-vors, 37-year old (B.K.), from the New Georgia Community in Monrovia, was two-months pregnant when she contracted the virus from her late husband. At least three of her seven children, also got the virus from their father. She and her children survived the disease. They were released from the ETU with certificates on September 30, 2014.

B.K. later gave birth to her eighth child (a boy) on May 12, 2015, at the St. Joseph’s Catholic Hospital in Monrovia. “I am happy that my baby and I survived the bad sickness", she said.

B.K. like 43-year-old B.T., face common challenges of nearly all the female survivors. Their landlords have asked them to leave their rented houses. House owners ignorantly fear that as survivors, they could likely spread the disease further to others in their homes.

With no husbands to put bread on the table, and no financial security, they are worried that they and their children would be thrown out into the streets.

As for B.T., she has 12 children for which to care for. Six of the kids are her own biological children while four are from a mate. The other two are children of a relative.

Caring For Children Affected By Ebola

Progress Made on the Project "Caring for Children Affected by EBOLA (19501)." The THINK Retreat Center for children affected by the Ebola EVD located in the ELWA Community, has provided counseling, shelter and recreational activities for 60 children (36 EVD affected children and 24 children survivors of Sexual and Gender Based Violence (SGBV). There were 5 community members that registered to become foster parents. 23 children have been reunified and 5 children are to be placed with foster families after their training. 36 EVD Children Disaggregation by sex: boys 14 and girls 22. 36 EVD Children Disaggregation by age: (0 - 5) = 5 (6 - 12) = 16 (13 - 17) = 12 (18 - 24) = 2 (Age not known) = 1 The 24 SGBV survivors were all girls. Disaggregation by age: (0 - 5) = 0 (6 - 12) = 10 (13 - 17) = 14 Feature Story I am 14 years old and was born in Nimba County in northern Liberia. My father was a farmer and contracted the EVD from one of his workmates. When my dad got sick, he was taken to and Ebola Treatment Unit (ETU) for treatment but did not survive. My mother was caring for my father and also got infected that way. She too got sick a few weeks after and died. I was left alone and until a businesswoman saw me and took me into her home. After a few months, the woman heard that a family in Monrovia wanted to foster a boy. The businesswoman sent brought me to Monrovia to live with the family. After a few weeks at the new home, Social Workers from THINK came to document children in the Duazon Community and that is how I was brought to the THINK Retreat Center for counseling. After a month in the center, I was reunified with my foster parents and then relatives from Nimba heard that I survived and came to receive me from my foster parents. I enjoyed my time at the retreat center and feel much better now. I didn't want to leave the THINK Retreat Center because I know that I will not get better care with relatives in Nimba County. I want to go to school so that I will be able to live a better life. I thank all of the people that helped THINK to have a good place for us to overcome our bad feelings about losing our parents. Thank You! The Board of Directors, staff, children and communities we serve are very grateful to all of you our donors and partners for your meaningful contributions that have make it possible for us to reach out and help EVD affected children, child survivors of SGBV and other vulnerable children. The 5-K Run / Walk event in Orangeburg, South Carolina on April 18, 2015 went well and the people of Orangeburg supported the Run, Chicken Bar-B-Q and donated school supplies and materials for the THINK Rehabilitation Home. The materials donated were packed on a container to be shipped to Liberia in July. Funds raised helped to pay for the shipping cost of the container. THINK will help children affected by EVD to get back in school and to help families that are taking them into their homes as new family members. We give a big THANK YOU to all who generously gave. Packing donated items to be loaded onto the 20-foot container for THINK Liberia What Do You Think? Guess what? Wal-Mart donated generously to THINK Liberia during the fund raising events in Orangeburg, SC! What do you think we should do to get the attention of other corporations to become supporters too?

Deputy Executive Director of UNICEF (from the UN Headquarters in New York), was our Special guest.

In January, Adolescents Leading Intensive Fight against Ebola (A-LIFE) Project in West Point had the honor of receiving the Deputy Executive Director of UNICEF (from the UN Headquarters in New York), as Special guest.

The youth had the opportunity to have a very interactive dialogue with the high level UNICERF team that included the Liberia Country Representative, Mr. Sheldon Yett, the West Africa Regional Director, the Ebole Response Director from New York and the Head of Child Protection in the UNICEF-Liberia office. The team was led by Ms. Hawa Page, Adolescent Development Office of UNICEF-Liberia.

The youth articulated issues affecting them and other youth of West Point. The young people pointed out that since the beginning of programs funded by UNICEF in West Point 3 years ago, school enrollement increased among them from 30% in the beginning to 70% last school year.

The Ebola outbreak has seriously affected them as their parents are not working and they are concerned that many of them will not be able to start school. The Legislature however have passed a decision that the re-opening of school be delayed for 1 month to give time to school authroities to ensure EVD prevention measures and to give parents and guardians time to get money to put their children and young people in school.

The second concern raised by the adolescents was the issue of increased teenage pregnancy. The young people attributed this to other young girls engaging in sexual activities to get money but now have unplanned pregnancies and are at risk of HIV and other sexually transmitted infections and Ebola.

The youth requested that a youth resource center be built to afford them a place where they can have their own space to interact, learn livelihood skills and mentor other young people.

The UNICEF guests were encouraged at the confidence exhibited by the youth as they interacted with them.