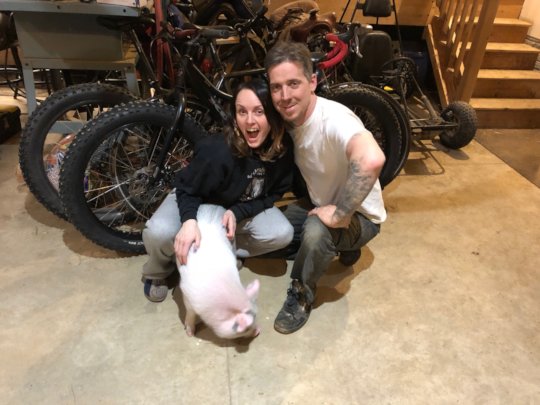 Anna & Kevin - of MN PAP & Norm the Spokespig
Okay! We have 5 full months behind us, and we are still gathering more momentum each and every day!
I have over 2500 miles logged year to date, and the Strava Club that I have created has logged well over 40,000 miles, all in the name of rhinos!
Big news: We have expanded, and now have a Minnesota chapter of Pedaling Against Poaching. I am excited to be joined by Kevin and Anna Gonzalez, along with their spokes-pig Norman! these guys are full of drive and ambition, and they are working on multiple avenues to help generate more donation traffic to this Global Giving site. We hosted an event at t locally brewery just last, week that produced a donation based on beer sales! Anna has generated donations via a makeup party, and she is also working on some upcoming yoga classes that with route proceeds to protect rhinos!
Additionally, we are partnered with Undaunted Clothing, out of Las Vegas. all Pedaling Against Poaching shirt sales will be totaled up monthly, and 100% of the proceeds will be turned over to Global Giving as a donation! shirt sales have been pretty strong. I am excited about this!
I was fortunate enough to get up close and hands-on with a Male Southern White Rhino, here in AZ, at the Out of Africa Wild Animal Park. the experience was truly amazing, and I am planning on many return visits to spend more time with him.
Importantly, we have sent $5,000 to the Black Mambas Anti-Poaching Unit in South Africa for them to use to equip their rangers with the best equipment avaialble. I am so lucky to be able to partner with these awesome women and men!
I am currently looking for other like minded people to join me globally, to raise awareness, and raise more much needed funds! Please reach out to me if you'd like to start a chapter of Pedaling Against Poaching and help raise money for this important cause!
more updates to follow! 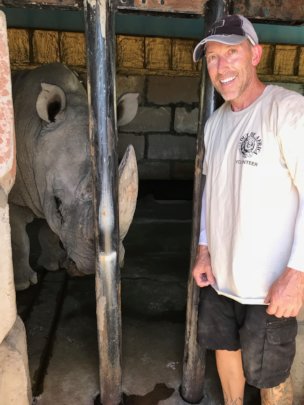 Jeff and Jericho the rhino 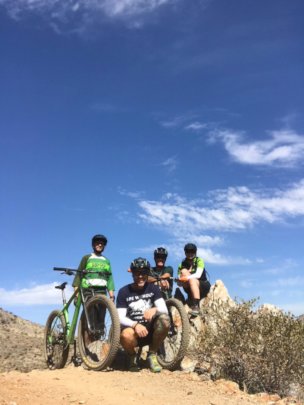 Getting into the classrooms 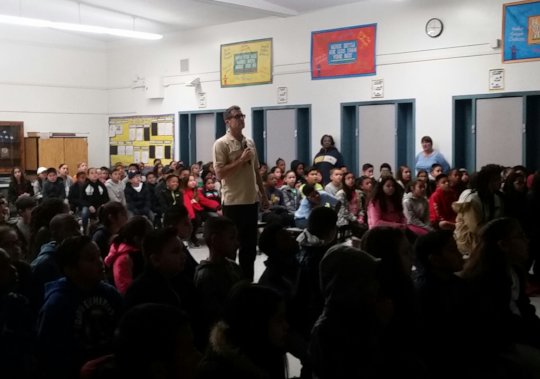 Rhinocation at a primary school east of LA!

We have had some success over the last few months in rolling out the Demand Reduction Curriculum in the US - and also in South Africa!

It has been a bit challenging recruiting teachers to participate in the program in Southern California, as many have already created their curricula for the spring of 2018. To address this, we have been instead reaching out to teachers for the Fall of 2018, which has led to some greater success in enlisting teachers, and thus schools. We have also retained the services of a globally-renowned educator for the fall of 2018. We are confident that this new approach will help us be even more effective!

As you know, Southern California is one of the regions with the greatest consumption of rhino horn in the US, so this has been our main focal point. However, due to our successful collaboration with the Bush Babies Educational program in South Africa, through our involvement with the women's Black Mambas Anti-Poaching Unit, we are going to be rolling out our curriculum in Limpopo Province of South Africa as well for high-school aged students. The implementation of the curriculum will change a bit given that South Africans are not end-users of rhino horn. The focus will shift a bit to be on the impacts of trade in rhino horn, which is a major focus of two of our curricula at present.

We are grateful to the 8 Primary and Middle schools in Southern California who have either participated or have signed on for next year!

Stay tuned, and thanks for all you've done to help us make this important effort to address demand for rhino horn at the source. If we are able to reduce demand, we can reduce the value of the horn, and thus the demand for poaching! Rhinos can then live without the dreadful pressure of poaching! 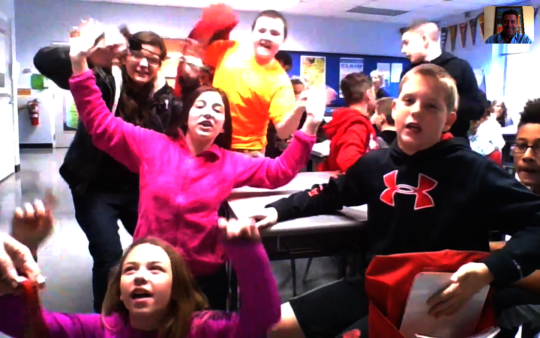 Rhinocation through Skype - Enthusiastic kids!
May 10, 2018 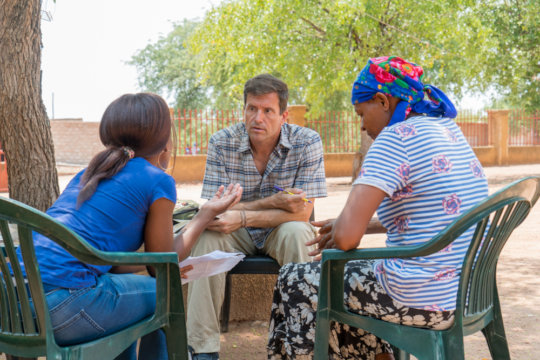 Well, we have really done it now! We were in South Africa for five weeks, working non-stop, and I am really happy to say we are done! All told, we have completed 157 individual interviews about the social impact of the Black Mambas Anti-Poaching Unit program – and we have even entered all of them into the data sheet.

When we finished interviewing all the Mamba women who were on duty (29) and all the Transfrontier Africa staff who support and enable the Mambas (8). In the last two weeks, we have completed ONE HUNDRED AND TWENTY individual interviews in a total of four different communities where most of the Mambas live!

Our four core research team members come from Helping Rhinos, The Living Desert Zoo and Gardens, California State University San Marcos, and Romy Suskin Photography. We have greatly benefitted over our visit  by employing the deft, skilled, and patient five Mambas who acted as translators and surveyors in the diversity of languages that exist in South Africa. These fantastic women were able to work between English, Tsonga, Sepedi (Northern Sotho), Zulu, and Afrikaans. The five have amazing language and interpersonal skills – as well as being uncommonly kind and smart. Getting to work with them has been one of the highlights of my professional career.

The community interviews have been amazingly interesting, if a bit disappointing with respect to our main hypothesis. We had hoped to find that the Mambas have changed their communities, but that has not been borne out. There were a few interviewees that have been influenced by the Mambas, but over 90% of the 120 people interviewed didn’t even know of the Mambas when asked.

Based on follow-up discussions with the Mambas, most do not feel comfortable talking about what they do with their community. So, it is not surprising that they are not making the social changes that we had hoped to find. Surprisingly, nearly all of the people who knew of the Mambas were from the Maseke community. What evidently made a difference, among those who knew of them, was the child education initiative that the Black Mambas run called the Bush Babies. The Mambas are reducing public support for poaching, but only through the child education program!

Conservation and rural communities can clearly be a match made in heaven. It was clear that people in the communities looked to conservation for jobs. We heard that more than any other response, and to nearly every question, even when it wasn’t particularly germane. The more that conservation areas can employ people, the better-supported conservation will become. As I said in an earlier blog post, unemployment in this area approaches 40%. Jobs create positive perceptions of conservation.

So, to celebrate this landmark event of completing such an ambitious series of goals, I took the first - and only - full day off that I took during my trip and went to  tour the awesomeness of Kruger National Park. The jobs that are created by visits such as mine are clearly the reason why these reserves receive such an astonishing level of public support.

I toasted every animal that I see in this Wonder of The World and be grateful for all the jobs that they bring to this area: Mambas and otherwise. 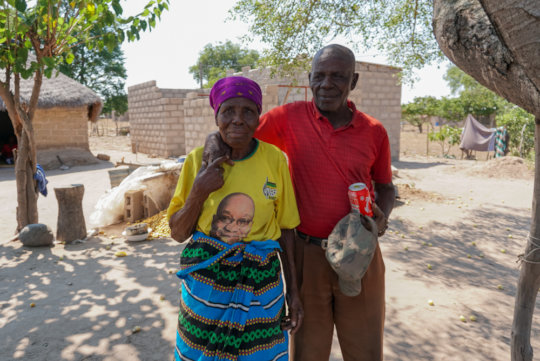 Wonderful and generous people from Acornhoek 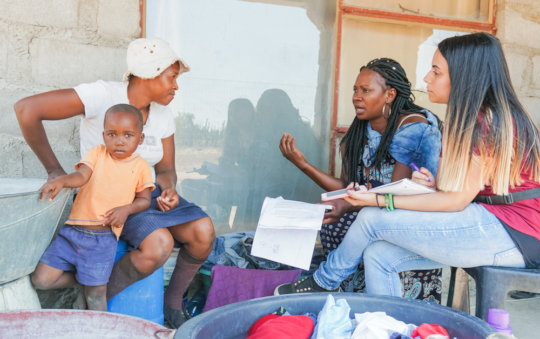 Collet & Chantal interviewing a Hluvukani woman
‹ 1 ... 4 5 6 7 8 9 10 11 12 ›
WARNING: Javascript is currently disabled or is not available in your browser. GlobalGiving makes extensive use of Javascript and will not function properly with Javascript disabled. Please enable Javascript and refresh this page.