A natural disaster challenges rural farmers and the project. 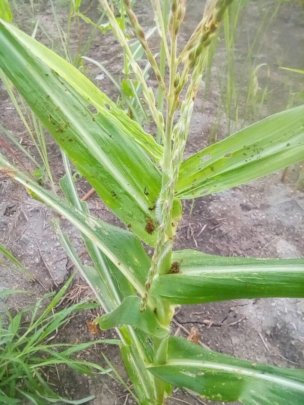 Thank you for opening this newsletter, We are here to inform you on recent challenges we had to overcome since december 2018. But let us start with a bit of history…

The aim of Seeds for Growth is to help building a better life within a group of at least 500 farming families (3,000 family members) within 5 years. We want to achieve this by actively supporting farmers with good seeds, other essential means and agricultural practice training.

The recent growth path to 125 farmers was only made possible, with a successful fundraising campaign, carried out during the summer of 2017.

During this third cropping season a natural disaster occurred: Nation wide, insects have damaged large cropping areas all over Sierra Leone. About 60 of the 125 acres of our project areas were attacked and affected by the so called "army worms": the crops needed to be destructed (burnt down), if chemical spraying was not done within a few days.

To prevent destruction of the crops, we decided to use recently received donations to invest in spraying the affected areas. This was really a difficult decision, because these donations originally were meant for further extension of the project with new farmer families.

But we decided that our only option was to support the current group of 125 farmers, and thus preventing a loss of 50% of the group due to a natural disaster.

By mid january 2018, the spraying seemed to have been successful in killing the insects, and the majority of the crops grew well. At this moment (end of March 2018) we are awaiting for the harvest outcome of the third cropping season.

When the harvest results and the repayments of the loans are sufficiënt we aim to start the fourth cropping season in april/may with the same group of 125 farmers again. Even if not all farmers might have been able to repay their loans, but shared their part of the harvest.

FYI: In the rural areas of Sierra Leone one can not find Insurance companies, that insure these kind of risks.

Having learned from the recent natural challenges, and the need to build further on a robust organization, the board of Seeds for Growth has decided to stabilize the project, supporting a maximum of 125 farmers during the cropping season until september 2018.

In the meantime we'll start a new fundraising campaign to raise funds for further extension to 200+ farmer families for the cropping season, planned to be started in october 2018.

Thank you for supporting our cause, we appreciate sharing this news letter in your network! 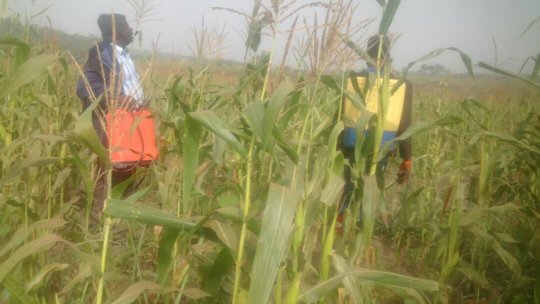 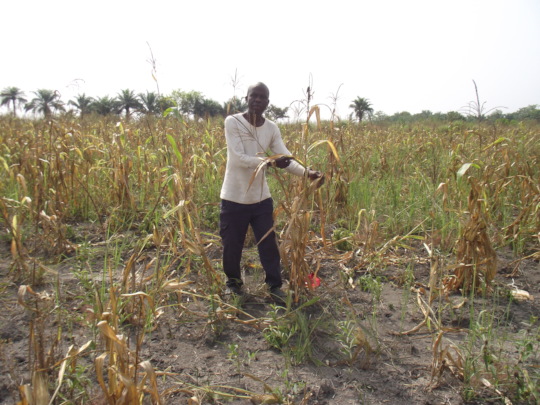 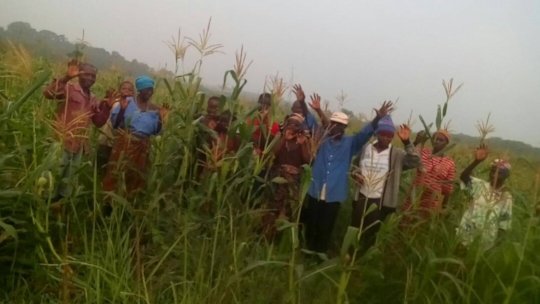 Thank you for opening this newsletter, We’d like to inform you on the fantastic development that the Foundation has experienced in this first full calendar year.

Starting microfunding and supporting 20 farmers in September 2016 turned out to be a great success: thanks to a 60-80% higher yield than their "usual" method, the farmers received additional income and all microloans we provided were fully reimbursed.

Soon the first expansion occurred in 2017

Thanks to donations in the last months of 2016, we were able to extend the project size to 50 farmers by March 2017. This second cropping season project was also reasonably successful, although problems occured with long-term and heavy rainfall when drying the harvest.

But not everything worked out as planned ...

In the rural countryside of Sierra Leone the harvest is usually dried on the grounds in the open air, but due to the extraordinary wet season the wet grounds caused slower drying and higher risk of molds and loss of quality.

Adopting the advice of our local program manager, Mr. M.S. Kamara, the board decided to facilitate additionals loans to buy Tarpaulin floors, so the corn could be dried faster and better. Thanks to the fundraising campaign during the summer of 2017, sufficient cash was available to make this possible.

The aim is to help build a better life within a group of at least 500 farming families (3,000 family members) within 5 years. We want to achieve this by actively supporting them with good seeds, other essential means and agricultural practice training.

For the autumn of 2017 we planned to expand from 50 to 100 farmers. To make this growth path possible, a semi-annual fundraising campaign was carried out during the summer. Thanks to the support of our donors, we have raised more than USD 5500, =!

And we were able to extend the project to 125 farmers in October, thanks to adjusting the field size to the current one acre field size in Sierra Leone (as adviced by the program manager) (1 acre equals approx. 4,000 m2)

The next cropping season will start in March 2018. Many rural farmers would like to participate, which is why we are now striving for expansion with another 100 farmers.

We appreciate your support!

We hope to keep you informed by this report. If you might have other expectations, do not hesitate to mail us! we welcome your improvement ideas! 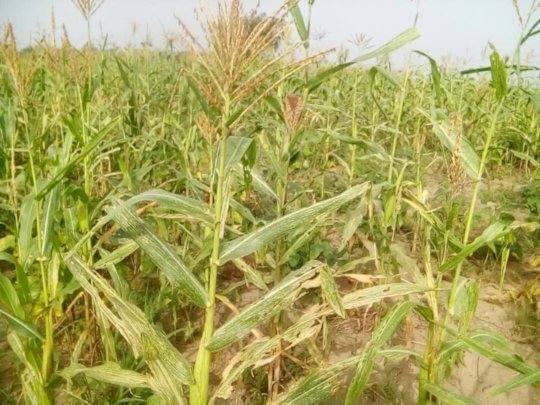 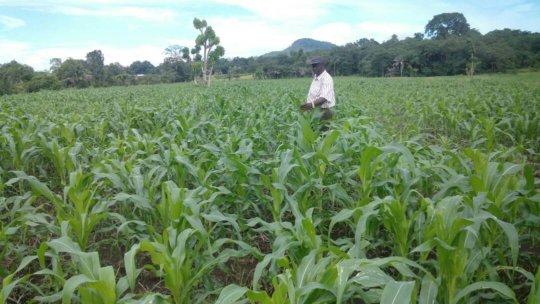 On our way to supporting 100 rural farmers in september 2017!

Thanks to your donations and support during the last 4 months, we have reached the milestone to duplicate the impact of our next maize cropping project again!

When the results of the harvest of the march-august cropping season will be satisfactory next few days, and all 50 farmers repay the loans, we will be able to expand the project to 100 farmers.

As you may have seen and heard on TV, Internet and other sources, Sierra Leone has suffered from heavy rains in august.

Near Freetown, the capital of Sierra Leone, a landslide has caused more than 600 casualties and many other people got injured or lost their homes.

Although less problematic than in Freetown, also in the Malal-Mara Chiefdom exceptional heavy rainfall has occurred, and has created problems during harvesting and drying. Due to the heavy rainfall, natural drying of maize on the wet rural grounds was not possible.

Therefore, we decided to adopt the proposal of our program manager mr. M.S. Kamara to rise the loans for this specific project and deliver Tarpauline plastics to the farmers. And supporting them with better drying and conservation conditions for the maize produce (see the Photos below). The Farmers will repay the tarpauline simultaneously with the Maize-loans.

A brief historic overview and the next steps...

We are committed to run this initiative, and are grateful that you and a growing group of people support us in different ways: by means of donations, promotional initiatives and all other kinds of support!

This assures, that our ambitious development plan to double the impact each 6 months is still on track! And we still believe we will achieve the goal of 500 farmers and their families by the year 2020, improving the livelihoods of 3000 rural inhabitants in Sierra Leone.

Here is a short wrap up of our history:

And here we are now....the next steps:

We hope to keep you informed by this report. If you might have other expectations, do not hesitate to mail us! we welcome your improvement ideas!

Sharing this email will be highly appreciated! 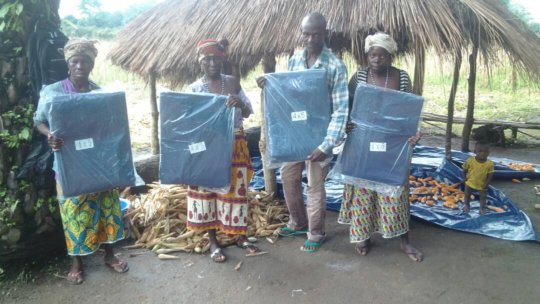 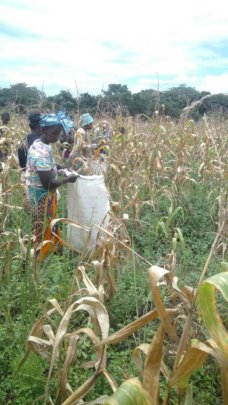 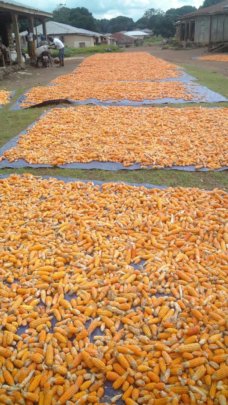 Maize drying in the sun, sept 2017
‹ 1 2 3 4 5 ›
WARNING: Javascript is currently disabled or is not available in your browser. GlobalGiving makes extensive use of Javascript and will not function properly with Javascript disabled. Please enable Javascript and refresh this page.