Foundations for the Future 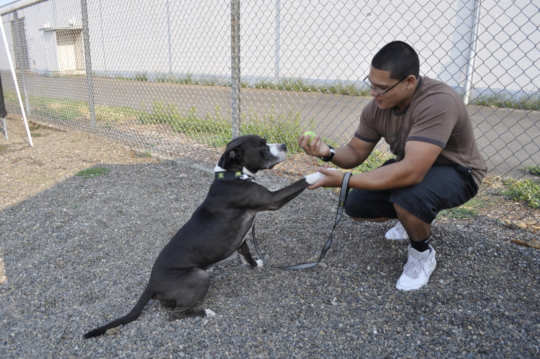 Learning patience, responsibility, and compassion for all life is the Project POOCH mission statement. Our hope is for the youth to leave the negative aspects of their lives behind while becoming the best versions of themselves. That’s exactly what Daniel, along with many other youth in our program, did.

Daniel discovered a love for animals working with Project POOCH during his time at MacLaren. The youth work with their dogs daily and practice the principles of positive reinforcement and behavior modification. As the trainers manage their dogs, they learn how to manage their own behavior. They also earn school credits, develop good work habits, and acquire valuable occupational skills. The relationships, emotional support and mutual trust established between the trainers and dogs are pivotal to the success. For some students and dogs, this relationship is a first experience of unconditional love, and it helps them develop the self-confidence and hope they need to build future relationships. Daniel impressed kennel staff during his time with Project POOCH with his passion for the animals. Makai, the kennel manager, described Daniel as patient, pro-active, and committed. “He was full of love for the dogs and always trying to learn and be the best trainer he could be,” says Makai.

After MacLaren, some youth spend time at "camps" or transition facilities under the custody of the Oregon Youth Authority(OYA). These camps prepare the youth to re-enter the community through schooling, training, and work experience, often even leading to career opportunities.

Daniel transferred to Camp Florence Youth Transitional Facility and soon connected with the camp vocational coordinator who helped him get an internship at Osburn Veterinary Clinic in Florence. Daniel has found his calling in his internship and is studying to become a certified veterinary technician. He learned that along with training the dogs like he did in Project POOCH, he is passionate about supporting their health, and advocating for their wellbeing.

It’s clear to those that work with him that Daniel has grown into a responsible, hardworking young man. His supervisors at Osburn report that he is a team player, willing to roll up his sleeves and pitch in anywhere.

Daniel is preparing to transition out of OYA custody this fall and hoping to find work as a certified veterinary technician, showing that he was always capable of being the best version of himself and creating positive change in the world. 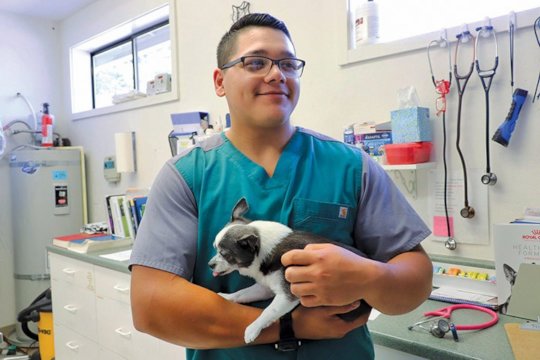 Daniel at his internship 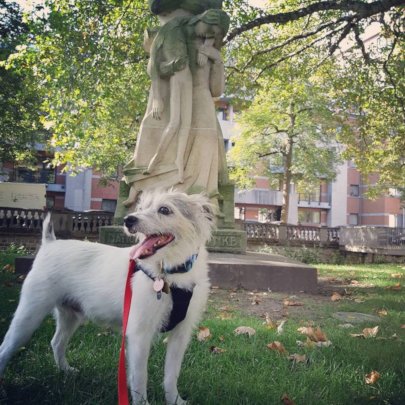 When we asked Gizmo's parents for an update on their little Jack Russell Terrier, we were planning on crafting a story based on the information they gave us. However, when we received their update, we were incredibly moved, and we felt that their direct words for so beautiful that we would just share exactly what they wrote. So here is a heartwarming update from Gizmo's forever family that exemplifies everything we love about the human-animal bond:
"Gizmo, his dad and I have been on a long journey of building trust together. Project POOCH had told me that after spending an undetermined amount of time roaming the streets on his own that he'd been through a handful of home visits with no family willing to accept his eccentricities and mental scars. When Project POOCH founder, Joan, brought Gizmo to meet me it wasn't like a Hollywood movie where Gizmo ran and jumped into my arms. He was nervous at first, or maybe just more interested in being outside and taking in all the smells of the spring. Our first meeting went well so I went to POOCH and saw him where he was most comfortable, with his absolutely wonderful youth handler (who by the way was honored for his immense love of Gizmo with his name being chosen as Gizmo's middle name :-D). He was excited to see me but I still wasn't sure, after all Project POOCH had so many dogs deserving of a loving home. After meeting one other pup, I asked to see Gizmo one more time. That was when I knew that I was meant to be Gizmo's mom. He came out to see me and without any hesitation he came over to me and sat on me with his little bum, a trait that would quickly become easily characterized as Gizmo's way of showing you he likes you.
Fast-forward a few years. I met the love of my life who just happened to be as big of a softy for dogs as I am. Within weeks of meeting Gizmo they were best friends. It wasn't long before Gizmo knew him by the name of 'Dad'. He captured Noah's heart in the same overwhelming way that he did mine. It's just something about Gizzy's tiny body but huge personality. Gizmo has seen the world with us. He's explored every corner of the Pacific Northwest with us and when life gave us the option of living abroad the decision was solely based on whether Gizmo could come with us. If not, then it was not even an option. He is our boy. Luckily Belgium loves dogs (maybe even as much as Oregonians do). We packed up and prepared for the long haul, which if we're being honest was one of Gizmo's greatest challenges yet. But, being the fighter he is, he made it over 5,000 miles with his Gizmo spirit intact.
It would be hard to chose one or two stories that really personify Gizmo's impact on our lives because he's just too important to be described with a summary. Despite Gizmo having been dealt cards of life that pushed him to his limits, he is always there for us. Long days lead to welcome home kisses, no matter what obstacles the day brought. The smallest of sounds and Gizmo is there to stick up for his home and family. He is by all intents and purposes of the word, family and we love him with every ounce of our hearts just as he does us. Our lives revolve around him, and we're okay with that because he has given us joy that nothing else could.
Noah likes to say that Gizmo is the only dog in the world that has seen two different oceans from two different continents. While I am sure that isn't quite true, I'd bet he's one of just a few. Our journey has brought across the world but Gizmo always keeps us at home, no matter where we are." 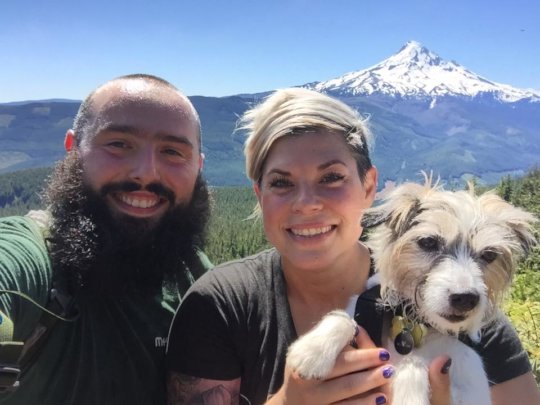 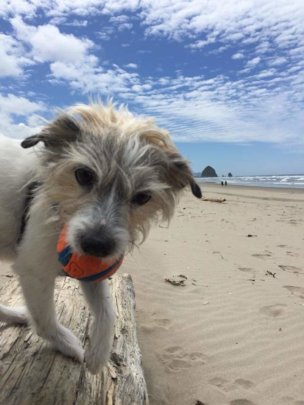 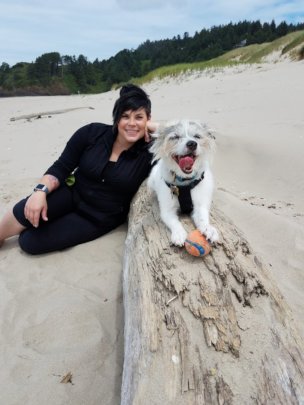 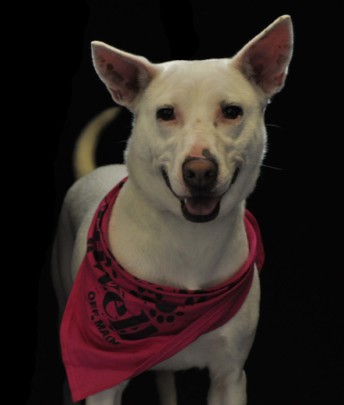 Blanca came to Project POOCH in October 2018 after she was found living alone at a lake as a stray. Blanca had been abandoned at a young age, and trusting people was hard when she initially came to the kennel. Scared of both people and other dogs, she tried her best not to interact with anyone.

Blanca was paired with an incarcerated youth at Project POOCH, and she was initially nervous. However, her handler continued to treat her with love and respect her boundaries. He took her for walks every day, gave her delicious treats, and sat by her side, doing everything in his power to show her that she wasn’t a threat.

Fast forward to a few weeks later, and Blanca had a new best friend. She loves nothing more than to spend time by her handler’s side. Each morning, she greets him with a huge smile on her face, and she has become popular amongst the other youth as well. While they trained her to pass her Canine Good Citizen Test, she gave them unconditional love in return.

A few months later, a small Jack Russell Mix named Minnie came to Project POOCH. Minnie was very reserved, just like Blanca was initially. Although Blanca was not interested in any of the other dogs at Project POOCH, she immediately bonded with Minnie. The two of them chased each other around the yard every morning and wrestled. Minnie found her forever home, and now Blanca is hoping to find hers, too.

Blanca is a unique dog—when we did a DNA test, the results showed that she was a Mega-Mutt because she is a mix of so many different breeds. She’s incredibly intelligent and loves being challenged, whether it’s through learning a new trick or solving a food puzzle. She also enjoys chasing the ball around the yard and going on walks.

Blanca has come a long way since she first arrived at Project POOCH. She’s come out of her shell and been an incredible companion to the youth. Because she loves her the youth so much, she can be protective of them when people come to visit the kennel. However, once Blanca’s trust is earned, she will love them forever. We believe that Blanca’s future forever family will be so incredibly lucky to have her.

For some dogs it takes longer to find their forever homes, but in the end it’s always worth the wait. Much like the youth at the kennel, Blanca has been through a lot in her life. However, we have high hopes that she will have an incredible future. To schedule a time to visit Blanca, please call our kennel at 503-981-2570. 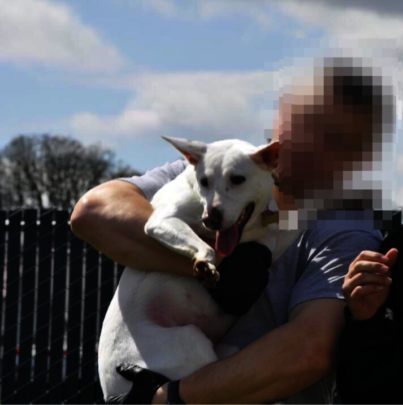 Blanca and a Youth 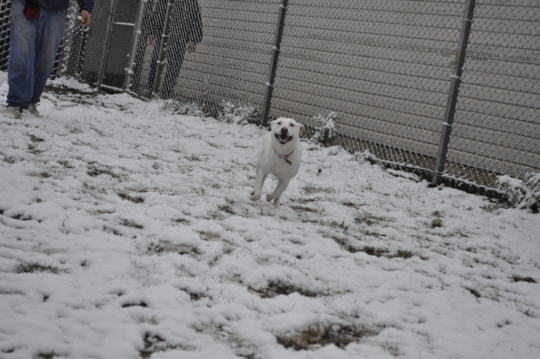 Blanca Enjoying a Snow Day
1 2 3 4 5 6 7 8 9 ... 18 ›
WARNING: Javascript is currently disabled or is not available in your browser. GlobalGiving makes extensive use of Javascript and will not function properly with Javascript disabled. Please enable Javascript and refresh this page.