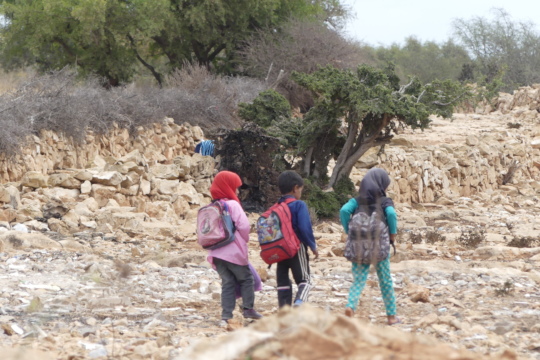 As we have successfully completed our test One Health programme in four women cooperatives and schools in 2018, thanks to GlobalGiving amazing supporters, we are now preparing to expand the scope of our project in 2019.

The essence of our holistic One Health project is to move from a curative mono-sectorial approach to a preventive cross-sectoral approach that address environmental and health challenges at their roots. So we don’t try to stop a hemorrhage on a wound by just placing a plaster, we also diagnose the origin of the problems and address it. In our context,  we are investigating the origin of challenges arising at the Human/Animal/Environment interface while identifying their relationships and causes in order to find the best control methods.

In order to address the problem of deadly rabies in the argan forest, we have started to vaccinate domestic dogs in villages and to conduct awareness campaigns in women’s cooperatives and schools in september 2018. This was successfully achieved by the multi-disciplinary team which included veterinary students , thus providing an excellent opportunity to also train future health professionals in One health and biodiversity conservation. During our first rabies vaccination campaign, we vaccinated domestic dogs in four villages, going from house to house and raising awareness on rabies. It was surprising to hear that some dog owners were not even aware of the risks of rabies. We also raised awareness on this deadly zoonotic disease and other ones transmitted y domestic animals with school children from 4 villages, educating nearly 150 kids on the importance of conserving the argan forest and preventing zoonotic diseases. Through our education campaigns with women in argan oil cooperatives. -the main users and custodians of the argan forest - we also amplified our impact by targeting women who were most concerned as mothers and also as users of this unique biodiversity

But our initial work has also highlighted how complex some of these challenges can be. The control of such vital health challenges as rabies needs to integrate the understanding of feral dog populations, their dynamics and ecology, which in turn is closely linked to domestic waste management and interactions between domestic and feral dog populations. Which is why we are preparing to conduct a multi-disciplinary study that will start early next year to better understand the dynamics of animal populations in the argan forest, as well as people’s behavior towards these animal populations. This is indispensable in order to develop effective control methods for such health challenges

At the same time, we are continuing to develop One Health education modules and interventions that can already make a tangible impact. For example our module on scorpions stings has already enabled women who were trained to avoid being stung by these lethal creatures, which is sadly a  frequent occurrence for women collecting argan fruits. Our health education programmes with school children on rabies and other zoonotic diseases has also protected those children from potentially deadly bites by wild or domestic carnivores.

Our holistic One health approach is based on the inextricable linked between the health of people, the health of their animals and the health of their environment. In the argan forest, tens of thousands of families have a livelihood which is dependent on  the argan tree and all the ecosystem services associated with this unique environment. However, life is also very challenging for all these families who have very poor, if any, access to basic social services such as water, medical or veterinary services. Our project will improve these people’s health and reinforce their roles as custodians of this extraordinary ecosystem -the last shield against desertification- the argan forest. 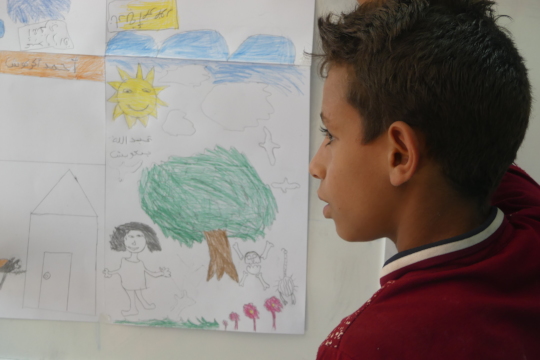 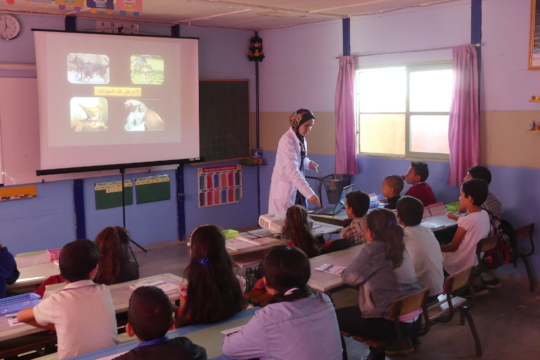 What a successful One Health campaign we just started! 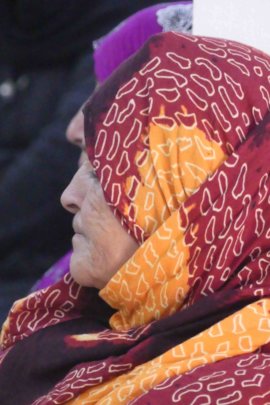 We have just returned from the Drarga region in the argan Biosphere reserve where - thanks to your support - we have initiated One Health education sessions with nearly 100 women and 140 children from four villages.

“I wished you’d come earlier to tell us what to do when bitten by a dog” said one mother whose child had been badly bitten by a feral dog. We explained them how to prevent rabies -the deadliest zoonotic disease - and two other very serious zoonoses. We also told them exactly what to do when stung by a scorpion. This was timely as four women actually died from scorpion stings when collecting argan fruits two weeks ago.

Each session lasted nearly two hours and women were overwhelmed with what they heard, interacting a lot with the One Health team. In fact, we have just heard that they have already started to relay all the information we gave them to other women in the associations who could not attend the session.

On World Rabies Day on 28th September, we realized  how much impact our One Health education sessions had on the children through the drawing competition we organized. It was simply amazing to see some children drawing beautiful and healthy argan forests as a source of a healthy life, or other children drawing the transmission cycle of rabies in the most perfect way.

Our fantastic vet team with 10 students from Institute Agronomique et Vétérinaire Hassan II in Rabat vaccinated domestic dogs in four villages, going from house to house and raising awareness on rabies. It was surprising to hear that some dog owners were not even aware of the risks of rabies.

This first campaign was just the beginning as we have more health modules to develop and plenty more villages to reach.  We will also launch a multi-disciplinary study on the canine dog population in this ecosystem shortly. But the results are already there… and Amazigh women are eagerly awaiting our return. 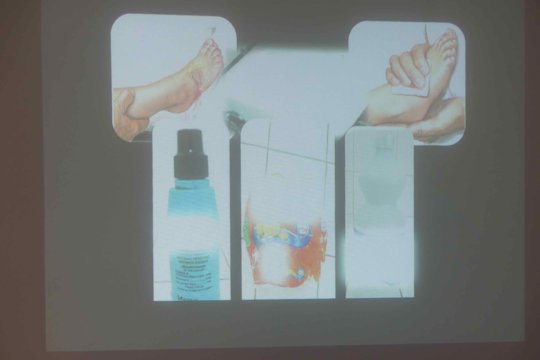 Would cleaning after a dog bite 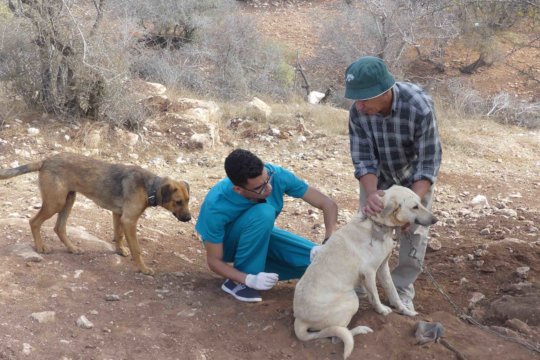 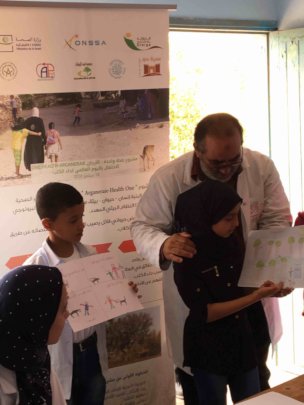 You can make a difference on Bonus Day: July,18 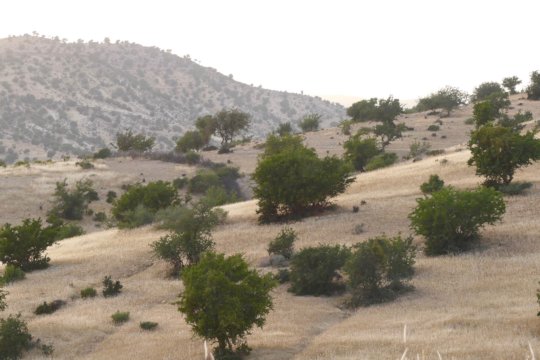 the last shield against desertification

You can make a difference on Bonus Day, July,18, as your donation will be matched at 50%

As we were preparing our next One Health intervention in the argan Biosphere Reserve scheduled for September, we urgently need to raise an additional £3,500 to conduct education, awareness and vaccination campaign in 5 villages (£700/village).

These three diseases represent a real risk for families living in the argan forest as an increasing number of dogs have gone completely feral and now live in packs near villages, occasionally attacking people or foraging for food near houses:

- Rabies is a disease affecting mainly children, transmitted by dog bites and always fatal once symptoms appear. It is the most deadly zoonotic disease.

- Leishmaniasis is a vector-borne disease transmitted by sandflies which also feed on dogs and rodents. The disease has increasing dramatically in recent months.

- Cystic echinococcosis is a parasitic disease caused by tapeworms of dogs and sheep which affects a majority of women. It can causing a massive liver damage which sometimes necessitates surgical intervention.

One of the first steps in reducing the risks of such diseases is to inform and educate populations most at risks through awareness campaigns, and to vaccinate when possible. We will educate children and their families on how to prevent these zoonotic diseases through simple measures, ranging from adopting the right behavior in front of a feral dog and what to do in case of a dog bite, to better hygiene and the control of mosquitoes at home as well as improved garbage management. We will also vaccinate dogs in villages against rabies, since the vaccination is the most effective tool to protect the population against the disease.

Our September campaign will involve teams of veterinarians as well as 20 vet students who will then be also trained into the One Health approach.

Save the Date Bonus Day: July,18, We count on you. 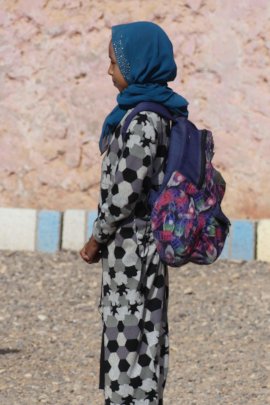 One Health education for children
‹ 1 2 3 4 5 6 7 ›
WARNING: Javascript is currently disabled or is not available in your browser. GlobalGiving makes extensive use of Javascript and will not function properly with Javascript disabled. Please enable Javascript and refresh this page.