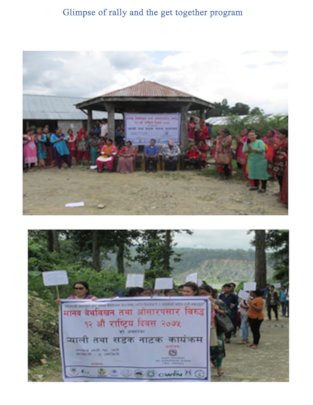 The 12th National Anti-Human Trafficking Day program was conducted in Manahari VDC in collaboration with different organizations such as HIMRights, Maiti Nepal, Shakti Samuha, Esther Benjamin, Sahas Nepal, ETAC Nepal, CWIN Nepal, Samudayik Bikas Kendra Nepal, Bal Kalyan Samaj, Ekta Kishore-Kishori Kendra,. The program was successfully conducted through a rally and street drama on September 03, 2018. National Anti-Human Trafficking Day is usually celebrated on the September 20, 2018 but as the VDC had already scheduled another program on the particular day, HIMRIGHTS conducted the program 2days earlier i.e. September 03, 2018. The rally took place for around 1hr 30mins which started from Manahari VDC and ended in a place named Golghaar, followed by street drama. There were a total of 200 participants. 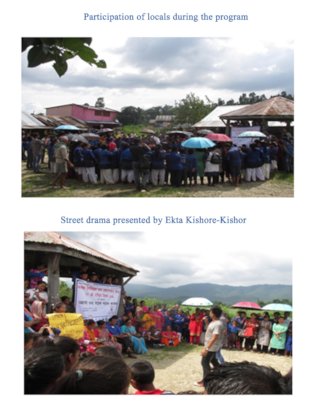 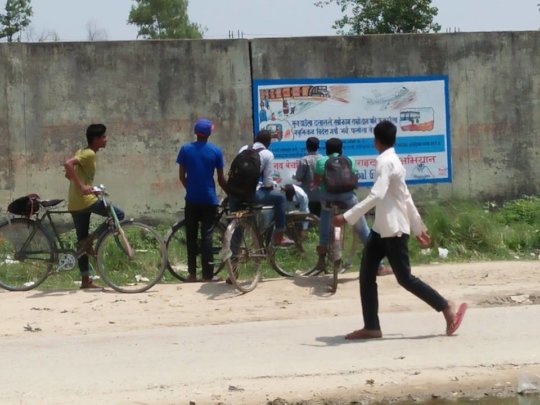 We have installed the graffitis with preventative messages in most used highway close to international border between Central Nepal and India where most human trafficking take place. We visited all graffiti sites including immigration check posts of Nepal Police and Armed Police Force as part of monitoring. We interacted with the security personnel, revenue office, and local people regarding trends of flow of Nepalese women and children through the border. Graffiti are targeted to decrease trafficking of women and children through these check points.

Pokhariya links rural areas of Parsa district with Birgunj, the district headquarters. Most of the people use this route to visit to and fro from Birgunj to Raxua,l India. Hence this place was selected for graffiti as the flow of people is very high.

The graffiti is installed in most visible place near bus park. The passengers get alert after seeing the graffiti. Bus drivers and staff started to ask unknown and suspects about their identity and reasons for travelling to India. They also said that the graffiti helped to reduce vulnerability of trafficking to some extent. Salama Khatun, Deputy Mayor of Pokhariya Municipality said, “The graffiti is in prime location and thousands of people can see and be aware of the issue. I think it helps many people in raising awareness on the issue of human trafficking.”

This is one of the most remote border check point. Due to open border, anyone can go to India easily. Security personnel and local people also claim that the number of people crossing the border through this check point is significantly increasing. Thousands of people cross border every day for various purposes. The graffiti installed in the border area has alerted many people crossing the border. Similarly, security forces has increased strict interrogation. Local people are also cautious about the issue and they started to cross-examine new faces and suspects and inform the local police.

We have placed the graffitis in most strategic areas between India and Nepal international boarder where most trafficking takes place. However, we need to form and train surveillance groups to be able to be more proactive in both prevetion and itnerception of humna trafficking. We have not been able to do this part due to lack of funding. I would like to request all to support us to take more proactive actions to fight this grave human rights violation of women, children, and men. 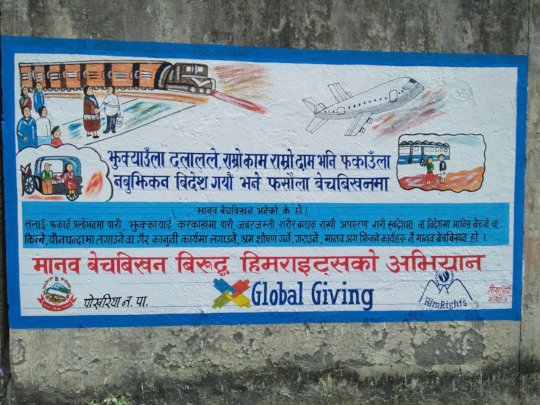 To prevent and reduce the cases of human trafficking and unsafe migration in Parsa and Makwanpur district of Nepal, HIMRIGHTS participated the GlobalGiving December accelerator to raise the funds. We proposed various community level activities such as capacity building programs, training, and support to survivors and mass awareness activities focusing women, children and youth- Wall Graffiti was one of the activities for mass awareness.

Prior to implementation of the activities, we consulted with our district staffs from Parsa and Makwanpur. Due to the limitation of budget raised, we decided Wall Graffiti would be the best for  mass awareness activities in Parsa (the major open international border areas of Nepal and India).  The Graffiti aims to reduce trafficking of women and children through informative pictorial messages and slogans. For this reporting phase we created four Wall Graffiti in one of the major international border areas to India; on the wall of the Customs Office, Community Health Post and in schools; with informative and pictorial messages on prevention of trafficking. We came to conclusion that multi-color pictorial artwork will attract those who are going to cross the border unsafely and or trafficked. They will be able to get the message to take action before crossing the border and return home or take support of the police or NGOs.

Nepal and India share more than 1850 kilometers of open international border and Parsa is one of the busiest exit/entry points with Birgunj is district headquarter. This is the entry point to India. There are six major open border points to India from Parsa: Raxual, Aalau, Prasauni, Bhishwa, Thori and Inarwasira. There are immigration and custom checkpoints. The open border between the two countries is one of the contributing factors in human trafficking and unsafe migration. This is made worse by lack of awareness on the issue, on the part of people and lack of systematic control by the Government. Awareness on possibilities of trafficking and unsafe migration, its consequences is very crucial in addressing the issue. Thus, we have selected these areas where local people and those traveling from especially central part of Nepal to India and beyond get the information on human trafficking and unsafe migration. These are the most visible spots where people stop before crossing the border; similarly when they go to go for health facilities. People can easily cross the international border without any documents, we would like to make people think seriously on prevention of unsafe migration and trafficking before crossing the border.

Two Graffiti are painted at the walls of two schools in the border area and next to the highway. The objective for doing it in the schools is for teachers and children to be aware on human trafficking and unsafe migration and share the messages to their family and communities. The graffiti were created in April-May 2018.

We will visit the schools, health post and custom office to assess the impact of the Graffiti to prevent unsafe migration and human trafficking. Next phase of Graffiti will be in Makwanpur and in the highway leading to this international border.

Preparations for the Graffiti:

The central and district staff did the mapping for the best locations in terms of mostly used for trafficking as well as where there are no NGOs working in this issue. The locations were finalized with third field visits. The team discussed with the concerned stakeholders of Birgunj Metropolis, Pokhariya Municipality, Chipaharmai Rural Municipality, and Custom Office, school management committees of Shree Nepal Rastriya Primary and Higher Secondary schools of Pokhariya and Birgunj and community about the activities and its objectives. They were very positive and provided free spaces for the pictorials. The local government also supported by permitting us to put the government logo in the painting, which will help to take the information seriously by the target group.

We finalized the anti-human trafficking and safe migration slogans and artworks.  Similarly, the team decided along with our Bara office the size of each graffiti based on the selected areas, slogans and pictures. Drawings 1 and 2 are created by the children for comic book and posters on human trafficking in 2002, conducted by HIMRIGHTS with some changes.

1)                  The definition on Human Trafficking as “Human trafficking is the trade of humans for the purpose of forced labour, sexual slavery, or commercial sexual exploitation for the trafficker or others by luring, force, abduction”   was written in all the Graffiti to educate people and create mass awareness among vulnerable groups and the community.

It might be traps do not blindly fall for it.

Save yourself and others from being trafficked.

Please join the hands to make safe and civilized society. 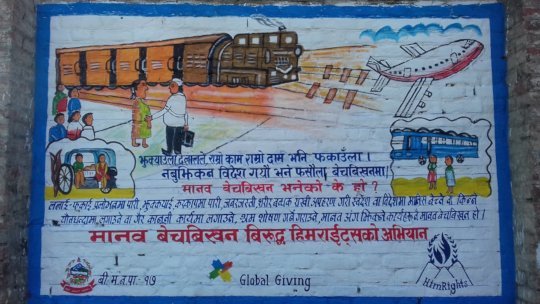 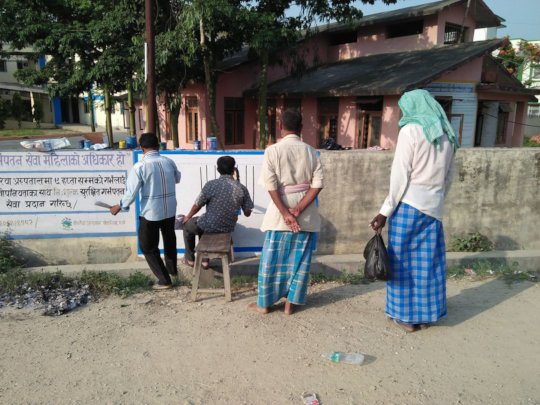 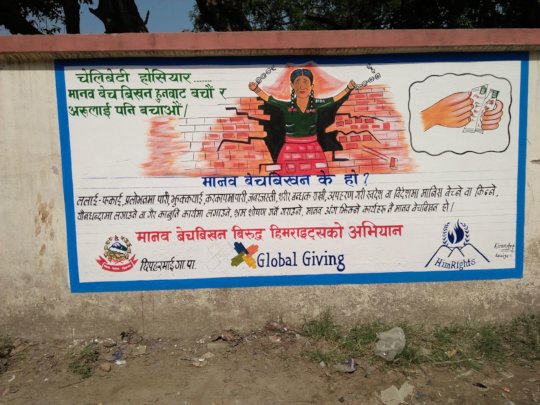 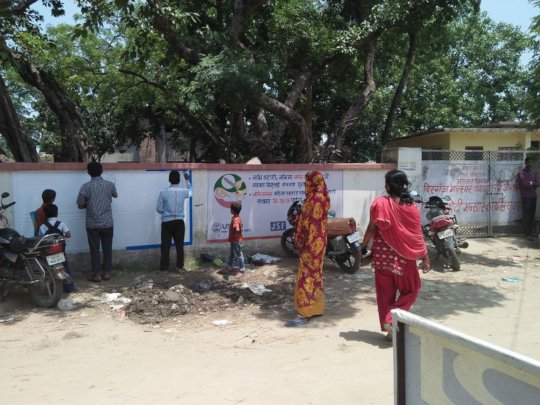 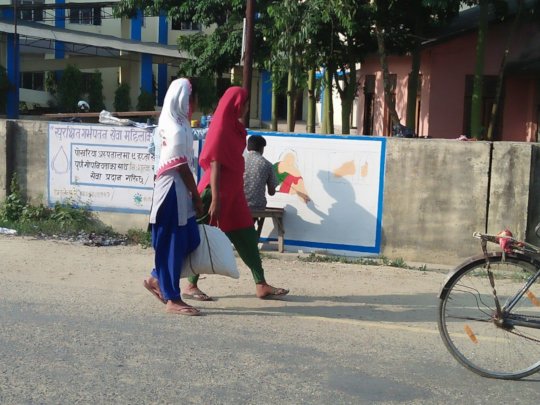 Graffiti process
‹ 1 2 3 4 5 ›
WARNING: Javascript is currently disabled or is not available in your browser. GlobalGiving makes extensive use of Javascript and will not function properly with Javascript disabled. Please enable Javascript and refresh this page.