Happy New Year and THANK YOU! 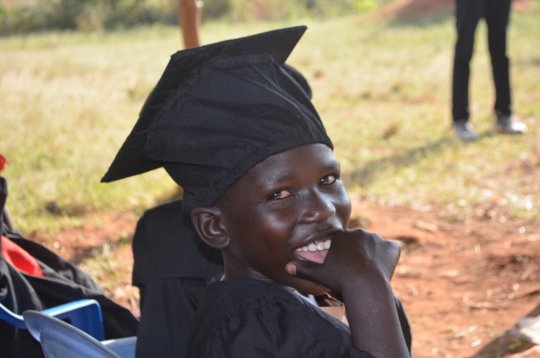 Here we are at the end of another wonderful year at Seeds for Development.

All of the nursery schools we support (5) had graduation ceremonies – they take it VERY seriously!  In late November/early December I attended 4 of them and whilst they were all different, one thing really struck me.  All of the children look so healthy and that is quite simply down to their daily cup of porridge.  Thanks to your kindness and generosity, we can focus our attention on supporting other projects and nursery schools. In fact, we are planning to support 2 more in 2019 - by paying for 2 teachers, a cook and of course - porridge!

We had some great feedback from the primary schools where our nursery children go to next - and that was that our children outperform the other children by far and get off to a much better start. They are the top performers in every school they go on to.  This led to us starting a new project this year, which is to find sponsors for the brightest children we identify.  We now have sponsors for 10 children, who attend a fabulous primary school in the south of the country and are making brilliant progress.

I told you in my last report that it is 10 years since I made my first trip to Northern Uganda. I have made this short video about that very first trip, which I thought you might like to see. You can watch it here -  Looking back to my first trip 10 years ago.  So much has happened since that trip - we have supported more than 3,000 farmers with seeds, empowered women and girls, supported young men and boys and run training workshops for I don't know how many people!

It is thanks to your support that we have kept going and will keep on going for another 10 years at least!  Thank you so much and I wish you and your families a very happy new year and a 2019 full of love, peace and joy.

With all best wishes 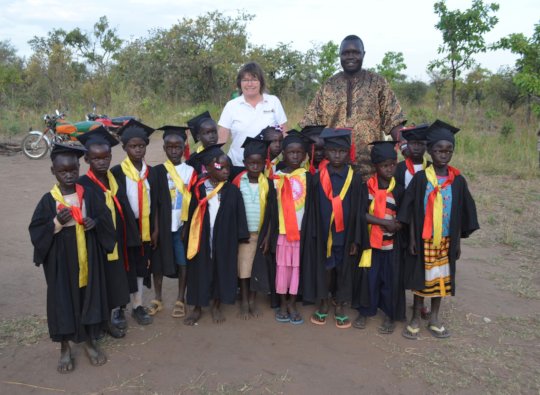 Alison with the graduates 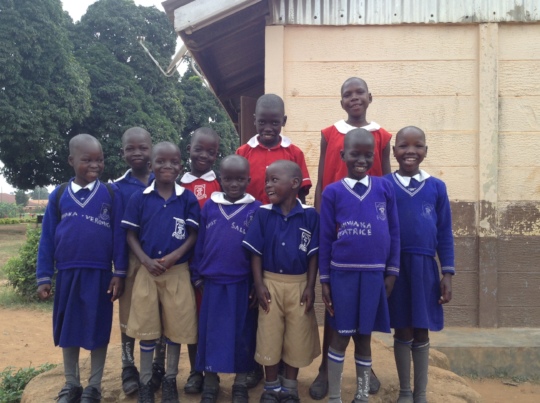 Your porridge and looking back to how it all started 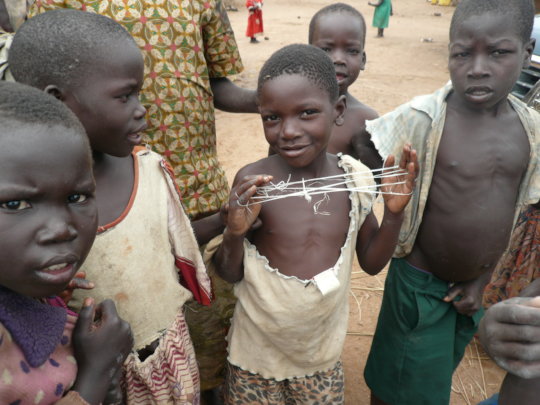 Cat's Cradle with a very precious bit of string

I am writing this update exactly 10 years after I made my first trip to northern Uganda.  At that time, I had no experience of working in Africa - it was my second trip! I was working, full-time and running Seeds for Development in my spare time.  I had no idea what to expect when you visit refugee camps or meet people who have lived through 20 years of hell and war. A war that saw children abducted and forced to commit the most terrible atrocities imaginable.  It took more than 10 hours to drive the 200 or so miles from the capital Kampala to the town of Gulu. The roads were terrible and it now takes about 4 hours to do the same journey!

We drove for hours through the bush and long grass and during that time I was told stories about how children were abducted and forced to be child soldiers.  I heard about girls being taken as sex slaves, how villages were torched and people tortured. Yes I heard, but I found it impossible to listen and take in everything I was hearing.  It was just too awful.

When we finally arrived at the camp for internally displaced people, I was overwhelmed by the number of children that were there and the lack of adults around to take care of them.  There was nothing else there, apart from the children. There was no food, no washing hanging out, no shoes or toys. There was no rubbish, which seems obvious when you have nothing to throw away. There was no school and no hospital.  The only sign of any caring was a young girl with a cast on her broken arm. The only sound was of children crying, mainly out of hunger.

The reason for the trip was to meet our first farmers group in the north.  I didn’t know what I was doing and my mind was a fog of sensory overload. Then we walked into the church, where the 64 women farmers were waiting to meet me.  They were all single parents, which is what brought them together to form a group.

Finally something I could latch on to.  I was a single parent, with my 16 year old son comfortably at home looking after the dog whilst I was there.  The fog lifted as I looked carefully at the women whilst they told me the reasons why they were single parents.  My feeling of connection quickly disappeared into the fog that swept back over my mind.

These women had been raped, not just by the rebels who were stealing their children and husbands (another reason for them being alone) but by the soldiers who were sent to protect them.  Their husbands had been tortured and murdered and to this day there are still thousands of people across northern Uganda waiting to hear if their family members are dead or alive.

The thing that struck me the most though was the look in their eyes.  Their look of utter hopelessness will never leave me and I knew then that I would never be able to leave them.  And so, for the last 10 years I have made 27 trips to Uganda, every time visiting these women and, as you can imagine, the hundreds of people who I have met along the way.

Every trip, I see positive change.  Little tiny signs of hope pop up as flowers, crops, a mirror or a toothbrush.  We come back from each trip with new ideas and projects.

One of the most successful project has been providing porridge to the children in the 5 nursery schools we support.  As well as giving the children hot food, it keeps their minds alert. We all know what it is like to work through the day skipping meals, but imagine what it must be like knowing that you can’t feed your children anything.  Providing the porridge takes away that awful worry.

I still work full time, which pays for our expenses and and my trips to Uganda, which are taken during my annual leave.

This is why your support and contribution to our porridge project means so much, as every penny we raise goes to our project in Uganda.

So thank you so much,  it means that we can continue to support the families in different ways and continue to bring hope and a little bit of joy to these people who are still struggling so hard to rebuild their lives after that war.

With my very best wishes 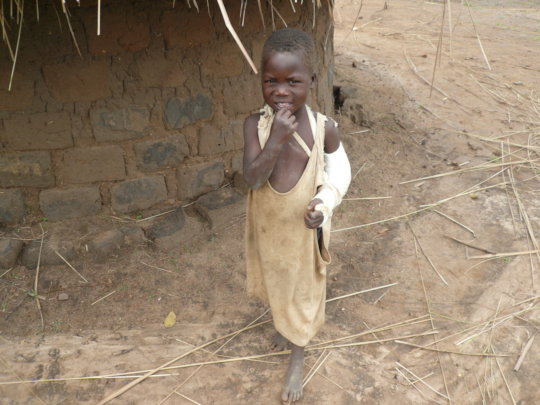 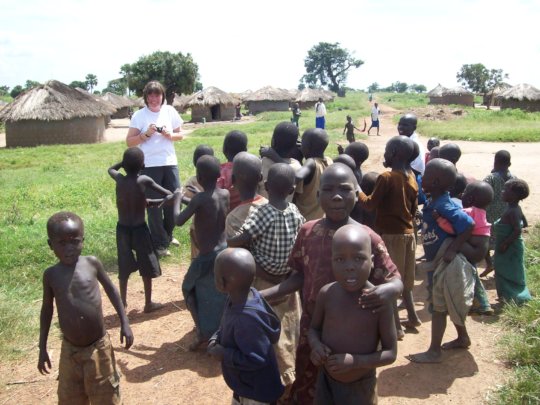 Visiting the camp for the first time 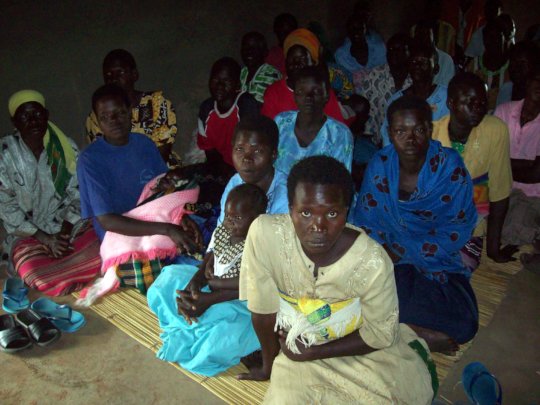 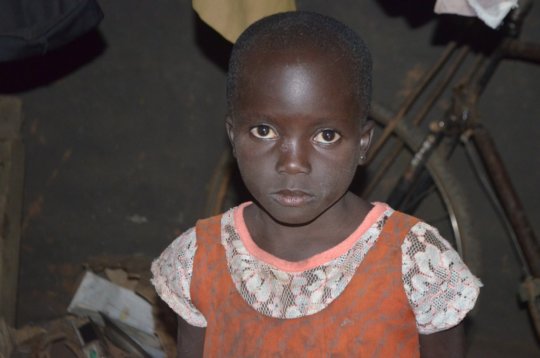 Sally is six and loves her school porridge

Sally is a very special girl with a very exciting future!  She is six  years old and one of 8 children.  She was a student at our nursery school in Putuke, where we pay for the teachers and provide porridge for the children.  The porridge gave her energy and that energy made her stand out as an exceptional little girl.  We have now found a sponsor, who is paying for Sally to go to an excellent boarding school in the south of Uganda.  At first I found it hard to accept that it is better for these young children to be taken away from their families at such a young age, but it is almost impossible for the parents to care properly for so many children when they have nothing.

Without our porridge, the 750 children might not eat anything hot all day. Yes, you read that right - the number of children receiving our porridge has increased from 670 to 750!  The reason for this is because more and more families are sending their children to our nursery schools, where they know they will receive a cup of hot porridge every day!

When things get tough - all it takes if for somoene to fall sick and have to go to hospital to totally bankrupt a family - they have to resort to going into the bush and picking grass and leaves. The photo with the greens, is all that one family will eat. I saw this during my trip to Uganda last month and it is very sad.

It was the school holidays during my trip and so I went to visit the children at their homes.  You can see in the pictures how very primitive it is. Everything happens in this hut and Sally sleeps behind the curtain with her brothers and sisters.

Very encouraging news from my trip was that parents are now really seeing the benefits of their children attending school and some are able to contribute to the cost of porridge, either by bringing in the maize to make it or with a financial contribution.  This goes some way to taking the strain off us, with the ever increasing number of children.  Your donation has made such a big difference and we are so grateful to you for your support.  It costs 8p for a cup of porridge and £15 for porridge for one child for a year.  This doesn't sound too much, until you multiply it by 750!

I could also see the positive change, with the children looking cleaner and healthier than I have ever seen them.

Our next trip is planned for November, when we will attend the graduation ceremonies of some of the nursery schools. I love seeing them all dressed up as if they are graduating from university!

Thank you again for your support and I hope that you found this update interesting!  Please do get in touch if you would like to know anything about our Porridge Project or any of the other projects that we are running.

With my best wishes 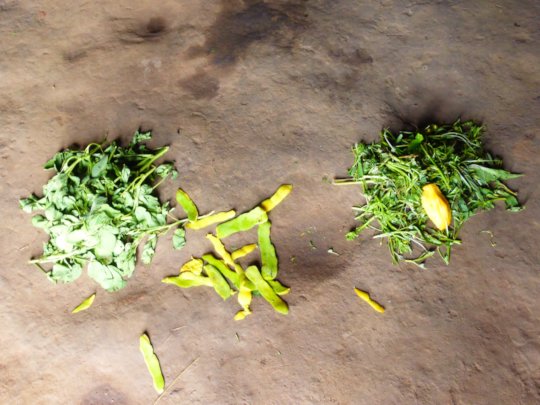 Leaves and grass foraged from the bush 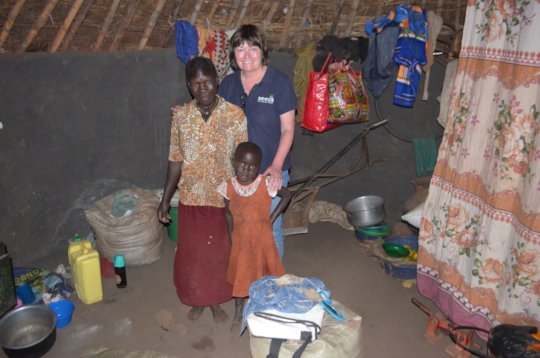 Me visiting Sally at her home and her mum 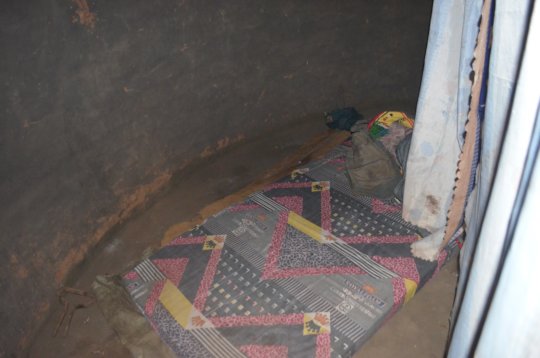 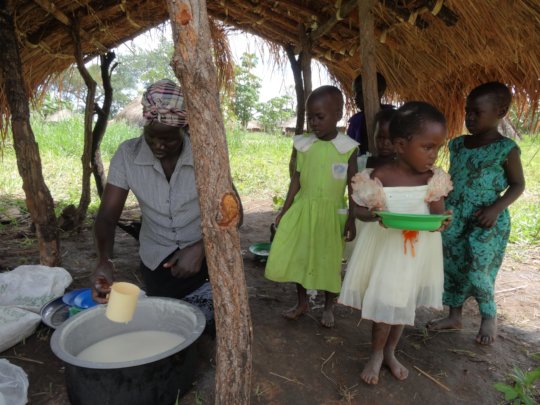