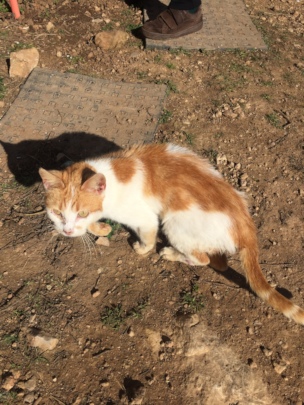 Tabata at the shelter

When I started volunteering at Apao four years ago I knew it was a matter of time before I would adopt but with nearly two hundred cats it wasn´t going to be easy to pick just one. After a few months I started to take notice of Tabata, a nine year old white and ginger cat who was in quite poor condition. I remember thinking she looked lost and hopeless as she wandered around, not like the other cats that seemed perfectly happy and content. I could tell she wanted attention but was nervous and I could only get close enough to touch her if I sneaked up behind without her noticing but when I started scratching her back she loved it! Over time she became more trusting and I decided she was the one, I so badly wanted to take her home and make her well.

I took the day off work, picked her up and went directly to the Vet where they had their work cut out for them. Tabata was skinny with a runny nose, flees, clumps of missing fur, an eye infection, a mouth full of rotten teeth constantly biting and gnawing at her legs and belly. The first thing we needed to do was get her strong enough so that they could operate and extract those teeth. So they gave her a good dose of subcutaneous fluids and antibiotics then sent us home with varios pills and ointment for her eye. Tabata went straight into quarantine, we didn´t know if what she had was contagious so it was best to keep her completely separated from my other cat Nuni.

With a constant supply of soft food and a warm bed she got stronger and healthier by the day. A week later at the Vet she was given more fluids, antibiotics, cortisone and an appointment for surgery to have all her teeth removed with the exception of the four fangs. And as soon as those teeth came out I immediately noticed a difference in the way she ate, she was no longer in pain, and I saw her use her tongue to groom herself for the first time.

After nearly three weeks in isolation I decided it was time to introduce the cats, they were both well aware of each other’s existence as they´d seen shadows under the door and caught glimpses of each when I was coming and going with the cat carrier. As soon as I opened the door Tabata came trotting out showing no hesitation, Nuni on the other hand, was a bit dubious and stalked Tabata for the first few days, following her around to see what she was doing all the while keeping a safe distance. But before long they were taking naps together and became play buddies, chasing each other back and forth with the occasional swat to the face but it was all in good fun.

I eventually found out that Tabata has allergies so by switching to a hypoallergenic diet her condition improved and regular cortisone shots were no longer needed to keep the itching under control. Today, Tabata is still is a little timid when I approach her straight on, this nervousness may never go away completely but nevertheless she´s gone through a complete transformation. She´s a total lap cat, purrs like a small engine, plays like a kitten and constantly flops herself down and rolls over in front of me so I can rub her belly. She´s also extremely vocal, she let´s me know when it´s feeding time and we´ve had some quite long conversations, in fact, the last one we had she told me she wants another playmate so we´ll see… 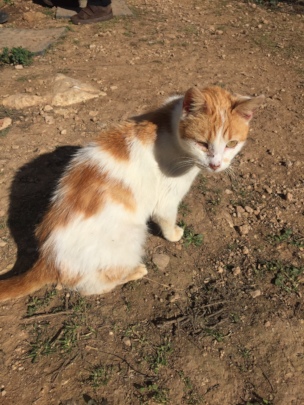 Not looking so well 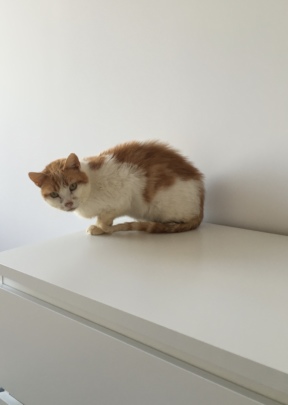 In her new home 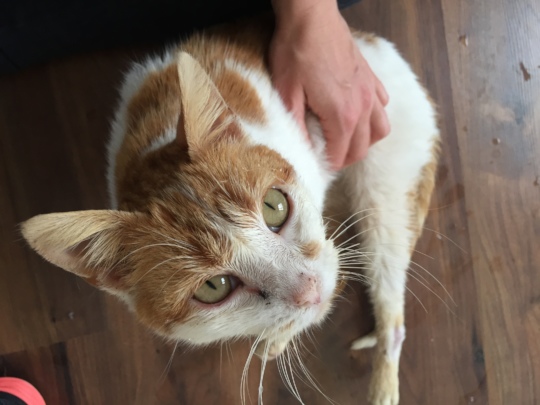 Starting to look a bit better 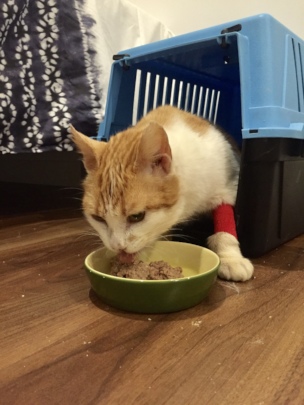 After having her teeth removed 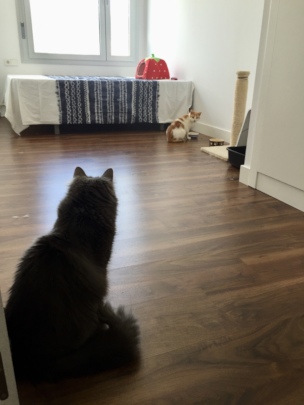 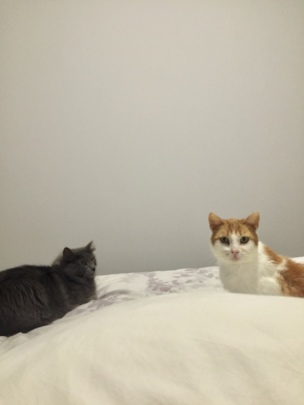 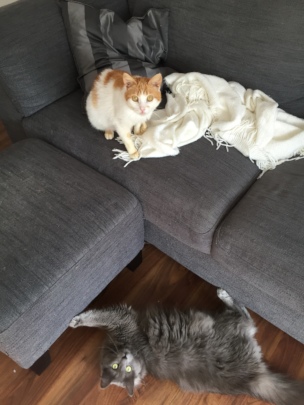 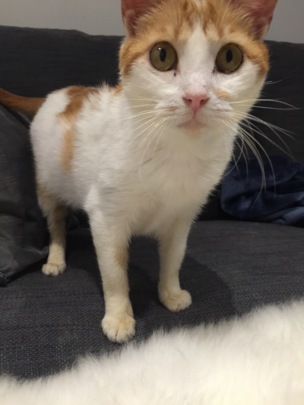 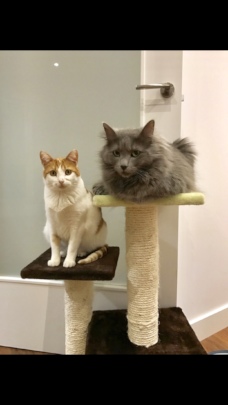 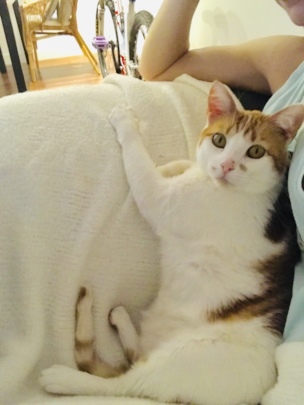 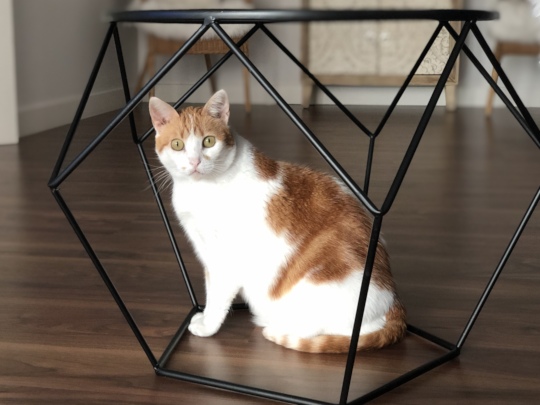 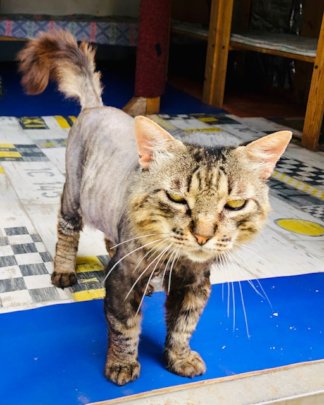 Senor Wilson with his new look!

As you may be aware Europe was recently hit with a heat wave and has experienced record breaking temperatures. Here in Spain we have not been spared and for the past couple of weeks daily temperatures have been reaching well over 30 degrees Celsius. Our furry residents have been feeling the heat so we took action by installing outdoor mist machines to help keep them safe and comfortable. Hooked up to a water supply the system sprays a cooling mist and actually reduces the temperature of the local area. The cats were a little dubious at first of the strange mist but they soon learned to appreciate its cooling effect.

Senor Wilson, one of our long haired cats with leukemia was really struggling with the heat so we gave him a nice new haircut and we think he looks pretty handsome now! 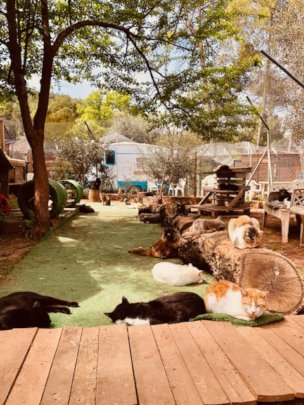 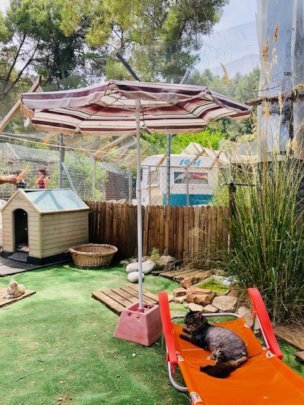 The History of Apao

My name is Vicky Debut, founder and president of APAO Cat, and I would like to share with your our story, starting from the very beginning.

APAO Animal Sanctuary was founded on January 15, 2010 when over 100 cats and 3 dogs were rescued from a local animal shelter, known to be keeping its animals under poor conditions. After many complaints were filed against the shelter a group of six animal activists, including myself, set out to find a plot of land where they could be rehoused. We managed to find a place where the proper zoning permits were in place and we signed immediately. The next step was to inform the City Council of Gavà (Barcelona), the municipal where the animals were currently being kept, and then we had 48 hours to move all of the animals from their negligent conditions to their new home at APAO.

Over the next few years, hundreds of cases of abuse and neglect arrived at our doors, and while thousands tears were shed we had an enourmous sense of joy for all the tiny lives being saved. APAO Cat is now a functional and operative animal defense organization that devotes its efforts to improving and increasing the number of rescues carried out within the community and across the country. And now with its own land where we live onsite, we are able to provide the animlas with 24 hour care.

APAO is located in Corbera de Llobregat (Barcelona), in a natural rural environment, where we currently house approximately 170 cats, and depending on their needs live in one of the six different areas:

Our Home is for those cats who live in a critical state of depression and sadness.

Felv Garden accommodates for our cats with Feline leukemia virus.

Special Corner is for cats with social issues and don’t interact well with others.

Adoption House accommodatesour most sociable cats for which we hope to find homes for.

Common Garden is our largest area where the majority of our cats live.

We appreciate you taking the time to read our story and thank you very much from the bottom of our hearts for collaborating with us, without your help none of this would be possible.