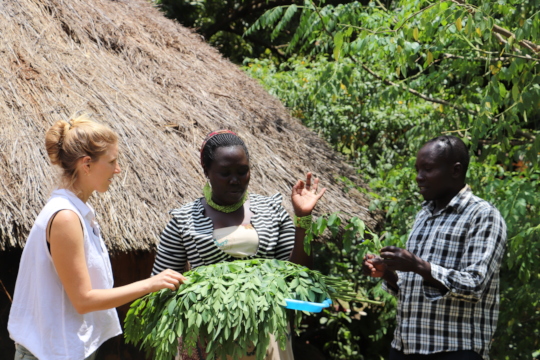 You may ask why we’ve decided to focus on planting Moringa for the Sudanese refugees in Northern Uganda; there are several reasons:

1. The Moringa tree is native to this area.

As part of the Native Seeds project it’s important we utilize native plants in our restoration and humanitarian efforts at all times.  As Project Manager Georgia likes to say “Sometimes Nature has the answer.  It just needs Human hands to spread it.”  There is no need to bring in foreign plants when a local one fits the other criteria we’re looking for!

2. The Moringa tree is fast growing.

They can reach up to 3 meters in their first year, leaves can be harvested as earlier as 3 months after planting and bloom after only 8 months.

Due to climate change, the Northern Ugandan climate is far more Arid than in the past.  Moringa can survive and thrive even in arid conditions.

The Moringa is a great, natural way for us to combat nutritional deficiencies rampant in this part of the world! 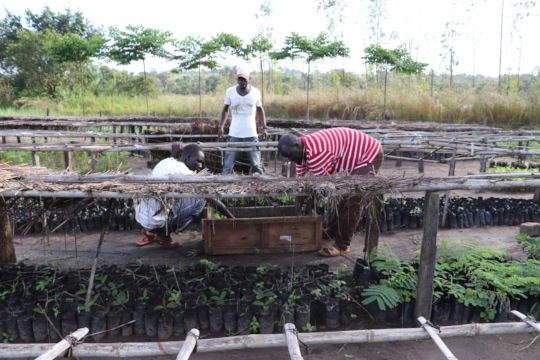 In response to the growing South Sudanese refugee crisis in Uganda, the Native Seeds Project is designing and implementing a Refugee Outreach program that plants trees with refugee communities. The project focuses on two major needs: increased nutrition to supplement the refugees’ food rations and the need for sustainable sources of firewood to prevent the further degradation of forests surrounding the refugee settlements. Within this model, we have identified moringa as a viable tree to provide ongoing nutrition to refugee communities, and several fast-growing hardwoods that can be sustainably harvested for local fuel needs.

The millionth South Sudanese refugee crossed into Uganda in August, and those numbers continue to rise. There are over 36 refugee settlements in Northern Uganda at the time of our October 2017 trip to the area, and based on the current political situation in South Sudan, these settlements are there to stay. Finding ways to support these refugees, and the host communities surrounding them, is critical both for their livelihoods as well as the ecosystem and environment in which they now call home.

Our first contact working within the the refugee settlements was Lutheran World Federation (LWF). LWF is one of the main refugee service providers in Northern Uganda, sub-contracted by UNHCR. Their HQ staff said that Palorinya Refugee Settlement, located in Moyo District near the border of South Sudan and home to 184,000 refugees who arrived between February – August, would be a perfect fit for our proposed project. From there, we had a preliminary meeting with LWF contacts on the ground at Palorinya, as well as the Moyo District Government’s main officers in the field of Environment. As all environment-related activities within refugee settlements are carried out by the local government, it made sense that our main partner for the implementation of our project would be Moyo District Forest Office (DFO), rather than LWF directly.

We produced 3,000 moringa seedling in September in preparation to implement a pilot within Palorinya refugee settlement. Due to unexpected rains, only 1,500 survived and were transported to Palorinya for distribution and training. Over the course of two days in October, our team, in collaboration with the DFO, distributed 1,500 seedlings and conducted trainings with 28 EPCs, who carried that training to a total of 375 refugee households. This means that in total, the pilot’s impact reached over 1,700 refugees.

We plan to significantly scale our Refugee Outreach Program at the start of 2018. Our Pilot Phase in October served as ‘proof of concept’ for the viability of the project, as well as the integrity of our partner, the Moyo District DFO. It also showed us what works and what doesn’t work. Primarily, we learned that transporting seedlings from our nusery sites in Gulu up to Moyo is time-intensive, costly, and results in the loss of seedlings due to the terrible state of the road to Palorinya. Through this understanding, and in collaboration with Moyo District DFO,  we have restrategized our outreach plan in 2018 to include the creation of tree nurseries on-site at Palorinya.

Planting Trees One Farmer at a Time 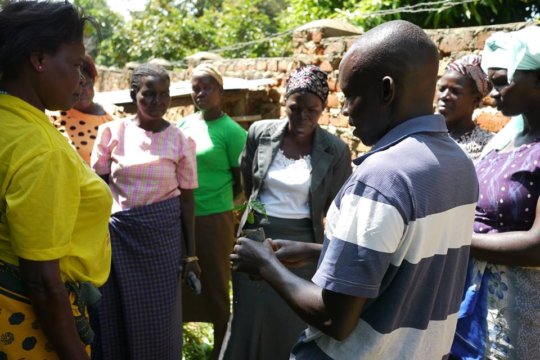 Opoka and his fellow farmers remember that the parish of Atiyaba in northern Uganda was once forested. This mosaic landscape of savannah-like grassland was punctuated by great swathes of tropical forest expanding out from river ways and swamps. Tree cover was the norm and not the exception, and even in grassy landscapes trees were everywhere.

These trees were necessary to human survival, providing food, medicine, materials for building homes and for creating useful items like baskets and clothing. And in this regard, little has changed. Though the global economy’s reach has provided plastic replacements for some of life’s necessities, trees are still the only source for many of the essentials.

What has changed, and changed dramatically, is the area and quality of forest to be found in Atiyaba. Juliet, an herbalist who harvests medicines to heal her community, describes having to go further and further afield to find the plant remedies that once abounded much closer to home. “You just cannot believe how people are living without trees. It makes you sad to see it. Even now they take down mango trees for charcoal to sell, because the other species are not there any longer.”

Deforestation in northern Uganda is dramatic and has happened in just a generation or two. The way the land looks has been totally transformed within the span of Opoka’s lifetime. But he and other farmers in his area know there can be another way. They are part of a growing group dedicated to the reforestation of their villages and landscapes.

Reforestation can mean many things, including exotic fruit orchards and commercial timber plantations that in ecological terms cannot really be called forests. What is unique about the farmers in Atiyaba and elsewhere is that they are planting native trees, the species that have always defined their homeland and which are now hard to find.

Perhaps surprisingly, planting native trees was something of an unfamiliar concept to Opoka and his neighbors. That is, until Juliet and the group known as Wise Women - Uganda arrived to Atiyaba in May of this year. Providing training in tree planting basics and, later, seedlings of a variety of important native species, this group of women traditional herbalists arrived to Atiyaba with knowledge, with seeds, and with hope.

Working with local leaders at a grassroots level, the Wise Women have reached 29 villages so far, and provided trees and training to over 350 farmers this year. In addition, several schools and institutions have joined the effort. While many farmers received a modest 10 seedlings, some frontrunners have planted a thousand trees or more.

The tree seedlings themselves were produced locally at the Wise Women’s nursery in collaboration with Wild Forests and Fauna, a US-based non profit dedicated to the restoration and protection of wild forests the world around. WildFF first teamed up with Wise Women in 2015, and since has helped this community-based organization to grow into a force for native species restoration in the region.

In fact, the real work begins after the trainings and the plantings. Somewhat rare among reforestation efforts in the area, the Wise Women are dedicated to follow up. Monitoring and evaluation is an ongoing task until the trees reach an age when they can take care of themselves.

It’s amazing and it’s true: your support has allowed the planting of thousands of trees in climate-vulnerable communities throughout northern Uganda. And your support will help the Wise Women to ensure the success of the trees that have been planted, even while engaging with more farmers and planting more trees. It’s a model that embraces the age old practice of exchanging seeds and know-how from community to community, farmer to farmer. As this model is applied to a broader scale, you are helping to reforest northern Uganda, one farmer at a time. 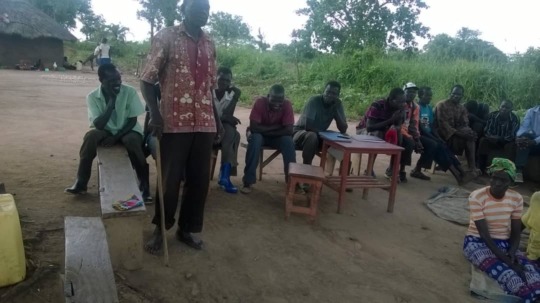 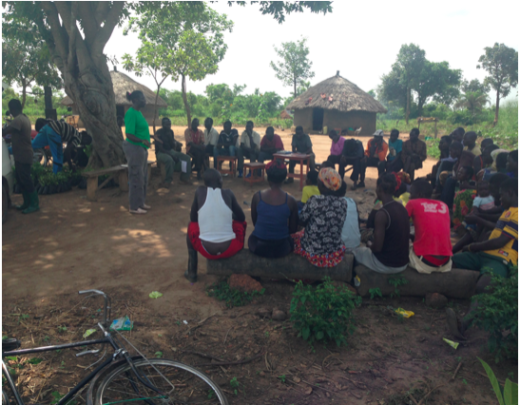 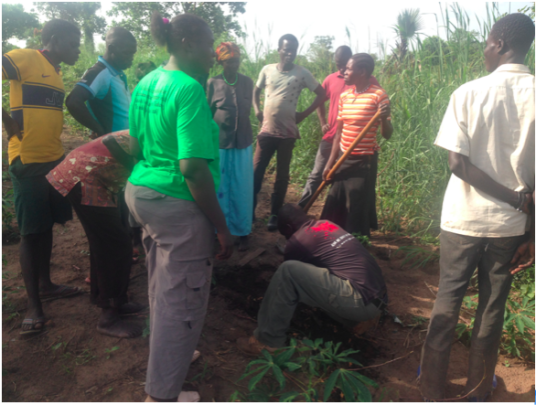 Planting native tree seedlings with local farmers
‹ 1 2 3 4 5 6 7 8 9 10 ›
WARNING: Javascript is currently disabled or is not available in your browser. GlobalGiving makes extensive use of Javascript and will not function properly with Javascript disabled. Please enable Javascript and refresh this page.