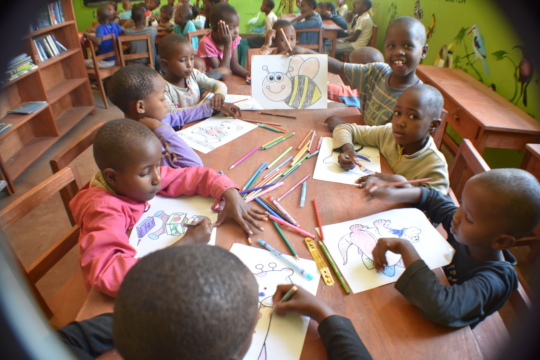 Progress:
• Firewoods
This time last year we bought huge amount of firewoods which we used for the entire 2018 until
August 2019. We decided to do the same which we expect to atleast take us to the mid of 2020. I
personally consider firewood as unreliable energy source, because i believe in the future we will not
be allowed to cut trees for firewood, government has imposed policy which requires all people to not
cut down trees without the permit from the government. With one of the volunteer we checked the
possibility of having bio gas plant, which wouldn't used only for cooking but also for lighting. We are
still in planning phase and we don't expect major steps this year nor early 2020. But i consider as one
of the reliable energy source in a long run.

• Plastic pavement project
We are currently working on making pavement (small bricks for covering the ground). We managed
to make one pavement block by burning plastics mixing with sand and make pavement block out of it. This would improve the environment not only in amani but also throughout mto wa mbu. We are planning to involve different people to collect plastics bottle and through that we can have clean environment arround mto wa mbu area.

• Sewing project
We have sewing project at amani, idea is to have different fabrics, and make different line of
clothes and other accessories such as waist pack, shirts, shirts, shorts and swimming customs. The
idea is not only selling on site but also to use other tools such as website to advertise and make people donate or buy to have product of their choice. We also includes sewing small backpacks whichi might be sold onsite or abroad, this would be made out of plastic bags, rice sacks anamd any other material, the idea is to ask people who visits amani to buy couples of bags which would be distributed to maasai children but the donation would be kept for amani

• Raise salary to administration team.
We have managed to add some amount to management team, we considered those who work hard and we raised to them, we are trying to catch up with government minimum requirements, not there yet
not close but veru optimistic we will get there.

• Website
We are working on website with different functionalities enables people to buy online, so far we have
set template already start feeding some informations. We took pictures of different products.

Problems:
• Outside toilets
Most of progress concerning this are in halt, because with bio gas in mind, the outside toilet needs
kind of solution which align with bio gas, which bring even more problems, but as it stands we are
running out of options to tackle this due to the fact that everytime sewage people come to empty,
its not staying more than a week before it get full again. And its difficult to dig more deep because
water source are not that far from the surface.

• Maize
We are now finishing 2018 reserve, we need to plan for the future(2020), this is one of the thing we
want to do now than later, the maize price is skyrocketing everyday, its important if we do it early.

For the past few years, Amani has been working toward a sponsor-driven financial model. Our goal has been to match each child with a donor, and for that sponsorship to cover not only the cost of the child's educational expenses, but also the per capita cost of childcare at Amani. Previously, donors only covered school fees and supplies. This new, holistic approach to sponsorship is important because without covering expenses like food, childcare, campus maintenance and medical supplies, our children may be able to attend a private school but would return home to the children's center to find there's not enough food, or that we can't pay our staff. These are the less obvious costs of caring for our children, and our comprehensive sponsorships ensure Amani operates smoothly and sustainability.

With this one-child one-sponsor approach, we know that every child’s needs will be met year after year. And beyond that, the children feel that they have a parental, mentoring relationship. A personal fan club. Someone who truly believes in them and supports their dreams. They are proud to share their grades and excited to write letters and skype with their sponsors. It provides accountability for them to work hard in school, and a source of encouragement as they learn and grow.

We’re working towards finding an individual sponsor for each of our fifty children. In 2019, we’ve already seen numerous new sponsors commit to our community. We need more support to guarantee every child has a match. This year we have and will continue to raise awareness and reach out to new sponsors who can help us ensure our children never have to worry where their next meal will come from.