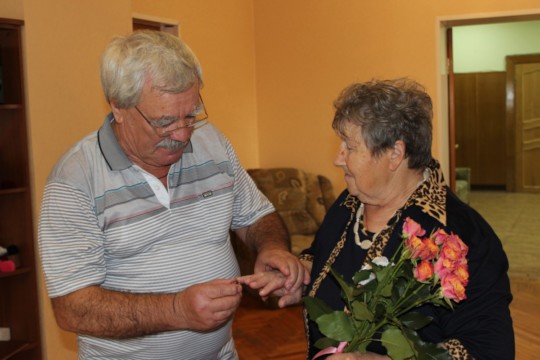 This autumn has been rich for weddings in our nursing homes. We are extremely happy when elder people find their significant others, and below we publish a few photos of the happy couples.

Here’s the letter from our nurse in Tovarkovo, Lyudmila who helped to organize the wedding:

“On October 17thwe had a wedding of Evgeniya and Vasily. Everything was organized as it should be: “redemption” of the bride by friends of the groom, ceremony in the registry office under Mendelssohn's waltz, exchange of golden rings, and afterward - a feast with congratulations, contests for guests and, of course, a wedding cake. This is the third wedding ceremony already in Tovarkovo during the last year.

Evgenia survived a stroke and a recent operation but she’s a fighter by nature and has an active lifestyle: draws pictures with her left hand (right one hasn’t restored its functions), goes on trips and excursions, participates in most activities, and simply tries to live life to the fullest. Vasily is an erudite, self-aware man, who likes to discuss politics and the economy of the country.

Together they feel very comfortable, and you might think that they have known each other for a long time: they chat about different things, take care of each other. And it does not matter what happened before they arrived at the nursing home. The main thing is that now two loneliness joined together and they feel happy. Together they rejoice at life and together they support each other and push to achieve success.

And we all: me, Irina, the hairdresser, Elena and Nadezhda, the cookers, Elena with her team from "Live Now" Charity Fund, tried to make their marriage day bright, fun, special and remembered for whole their life”.

Now, we would also like to tell you about the greenhouse organized in Rzhev (Tver region) with the help of “Enjoyable Aging” employees. Working in the greenhouse and picking up your own tomato is a breath of home life for people living in state houses. Besides, this is a useful activity in the fresh air. Our nurses helped them to get to the greenhouse and care for the plants. And we, during whole summer, were waiting for the results of the season. Finally, in the autumn they collected huge cucumbers (called "snakes"), tomatoes and Bulgarian peppers. It turned out into a big harvest festival, and everyone is determined now to grow even more tasty and useful vegetables next year.

Dear donors, this greenhouse and those weddings wouldn’t be possible without your donations. Thank you for being with us! 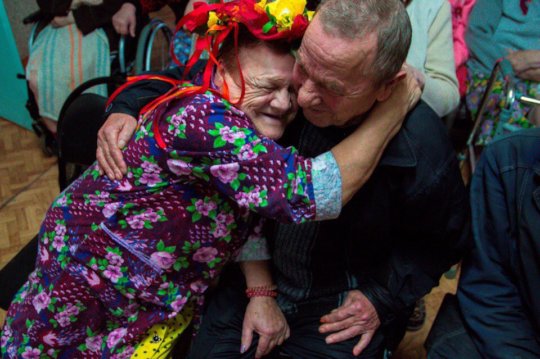 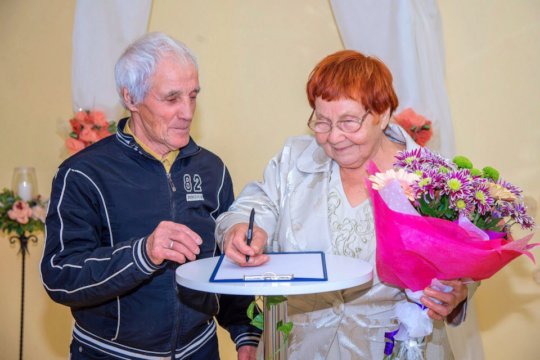 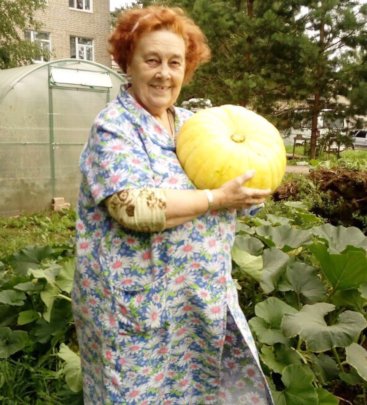 Rzhev: pumpkin from the green house 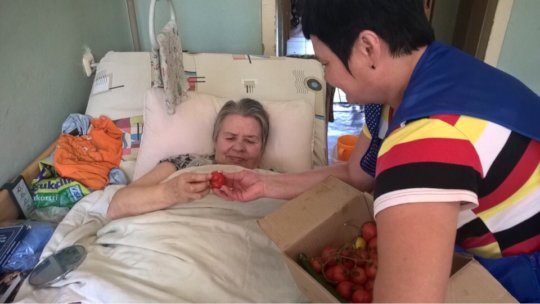 Our nurses hand out tomatoes harvest in Rzhev
Aug 3, 2017 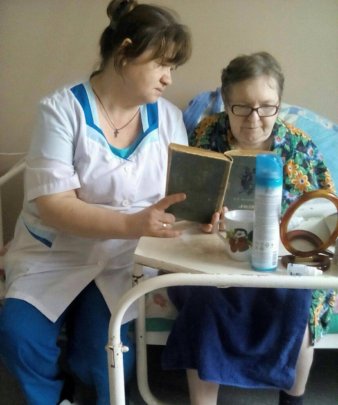 We want to share with you some photos from one of our nursing home located deep in Ryazan region. We wonder if you see something unusual there. Well, you just see old women who sit, talk to each other, play games. Nothing special unless you know that this is the bed-ridden part in the nursing home which just an year ago used to be one of the most depressing among those we visit.

Just an year ago all these old women used to lie whole days in beds staring at the wall. It’s your donations spent on nurses which made the difference and brought joy into their life! Such ordinary  joy as eating like a normal person sitting at the table and not in the bed, getting out of the room into the fresh air and just simply sitting and chatting with each other. All these changes are seen only after half-an-year of our Fund’ nurses work. Besides, the staff of this nursery home also went through training and started to care specifically about the bedridden rather than scrub walls and floors whole days.

This is the nursery home in Avdotinka, just in half an year it turned from our nightmare into our source of joy. Partially because this house is now involved into the pilot project we launched together with Ryazan region administration on upgrading nursing in state nursery homes to modern standards.

Now, a few words about this pilot project. During the last 10 years, since “Enjoyable Aging” just started as a volunteering movement, a huge progress has been made in most nursery homes in terms of cleanness and buildings conditions. Less and less we encounter the terrible odour, dirt and old people laying in rugs, what was a common picture 10 years ago. And yet, another terrible problem shows up in this cleanness: absence of any standard on caring about and communicating with bedridden people. While we walk through the rooms for bedridden, we see the depressing picture of lonely people who have nothing in their life but this empty room, their bed, and 3 meals as the only events splitting their day. There’s a beautiful summer outside but they never see it, they spend years in these rooms. This is what happens in the nursery homes where “Enjoyable aging” couldn’t yet hire additional nurses who could talk and spend time with them, bring them outside to breath fresh air and talk. And noone, including these old people, sees this as a problem, dirty floor or old linen are considered a problem and are now under strict control, but complete loneliness and life within one bed – not!

So, our current goal is setting all-Russia standards on providing care for elderly people in nursing homes which would focus on people rather than floors and buildings. We aim at providing all state nursing homes with professional nurses and these care standards. So that such miracles could happen not only in “lucky” homes but in all state nursery homes. Pilot project in Ryazan region is the step toward our big goal.

Thank you, everyone, who supports us! 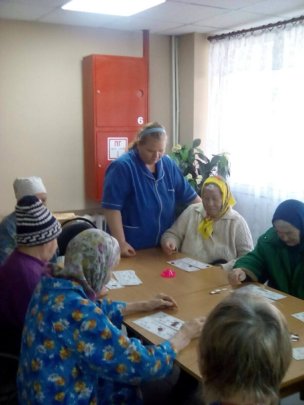 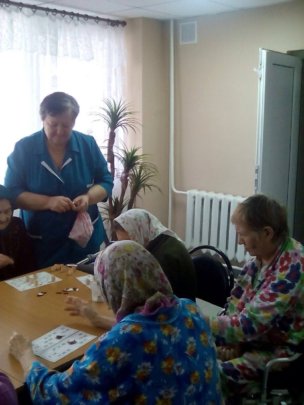 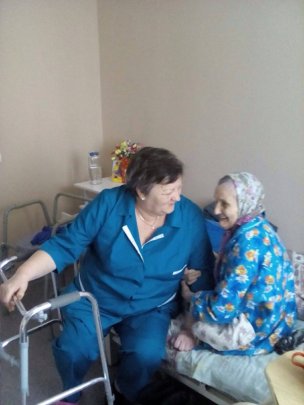 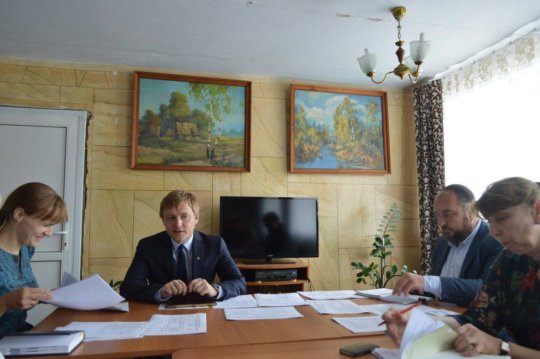 Finding relatives and connecting to outside world 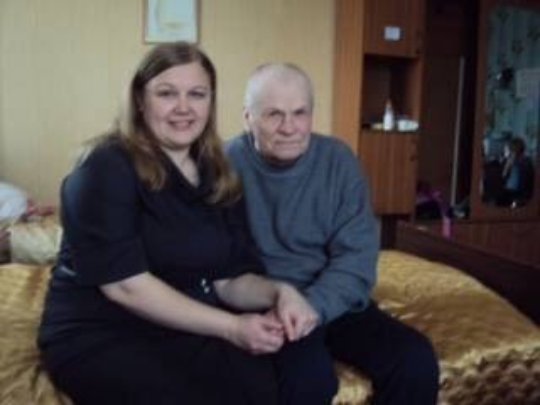 Many times we say that one important function brought by nurses is saving old people from communication hunger and isolation from the word.

In normal life we learn something every day through internet, our work, communication with other people. But many old people especially those called “immobilized” live in constant isolation, their communication to other people and connection to the outside world is extremely limited. Imagine if the old lady wants to discuss something with the staff nurse, eg a book, or a news, or has a question. In the best case the staff nurse would say she has no time which is true.

In such isolation, your brain and interest to life die out.  Therefore, our nurses are happy when old people ask them questions.

“We read books, letters, some babushkas ask us to read biographies of certain writers. I seek that in internet and read to them and they’re very interested” – writes our nurse Oxana from Tulskaya region.

“There’s one babushka Lyudmila Vasilievna in our home. She’s completely blind and bed-ridden but still she doesn’t lose her spirit and sustains her natural curiosity. She asks a lot of questions about actors, songs, she knows geography very well. I constantly explore her questions on web. Me together with internet are a great companion to her” – writes our nurse Vera from Vyshny Volochek in Tver region.

“Leonid asks me interesting questions every day, most of them I can answer only after through research on web, eg technical characteristics of “Topol M” rocket” – says Anna from Vyshny Volochek also.

And in Scopin nursery home, Ryazan region, due to your donations we could organize computer classes. Several old people learnt to use computers and internet which saves them from information deficit. By the way, in this home our nurses also organize regular literature evenings and talk about writers of Ryazan region.

Sometimes our nurses manage to find and restore the connection of old people with their relatives. Here’s two recent stories, one from Vyazma (Smolenk region), the other one from Nyandoma (Arkhangelsk region).

Vasily Petrovich lives in Vyazma. He can hardly talk, rather wheezes, bed-ridden for many years. But he has a passion for music and songs, when we visit him he always ask to play the "Amur Waves".  Recently, he faced a big trouble, serious leg illness. Without an urgent operations his leg would have to be amputated, otherwise, he would die painfully from of gangrene. Well, our Fund doctor Marina Andreevna persuades Vasily Petrovich to go for the operation, our Fund makes all the necessary effort to collect documents, organize transport, care. But then it suddenly  turns out that Vasily Petrovich himself categorically refuses to go anywhere. "Why should I deprive my leg and remain alive if I do not have anyone and I do not need anyone? I buried my wife long ago, my son and daughter quarreled many years ago and they do not communicate with each other, moved to different cities, I have not seen anyone since. For what or for whom should I live now? "

We don’t know what would be the end of this story if not our doctor Marina. She discussed the situation with our Fund nurses in Vyazma. Our senior nurse, Olesya, found the phone numbers of both Vasily Petrovich's children, reached them and explained the situation.

And right on the next day both Vasily Petrovich's son and daughter appeared simultaneously at his door (this really how it happened). They reconciled with themselves, then with their father, and finally persuaded him to do the surgery. He agreed, went for the very complicated treatment. Now he wants to live again – and he started to! Can you imagine? After a hard operation and many years of being bed-ridden! Now he asks to help him getting into the wheelchair to go out with his children to the yard.

Meanwhile, in Nyandoma another story happened. Gennady Fyodorovich got into the nursing home just recently. He lived alone for many years in Moscow suburbs while his children were somewhere in Arkhangelsk. Any connection was completely lost, no phone numbers, no addresses. Besides, he got blind and had to go to the nursing home in Nyandoma. There we have our Fund nurse Masha Nikeshina, he asked her is there some possibility to find his children. Masha immediately consulted with the local social worker, wrote the requests, searched through the old addresses - and finally found out out the younger son of Gennady Fyodorovich. Masha reached out to him, told him about his father, then Gennady himself could talk to his son. They agreed that the son would visit him. Masha organized everything for the visit, rented a hotel room in Nyandomam  helped Gennady Fedorovich to get there. And although he couldn’t see, he still could hug his son and his grandchildren about which he didn’t even know. Now whole his family promises to visit him, and the grandchildren are happy that now they have a grand-farther.

What to say here. “When you receive such letters from our nurses almost every day, you realize you will take whatever efforts for these stories to continue” – writes Liza Oleskina.

And these stories are possible due to your regular donations. Thank you, our donors! 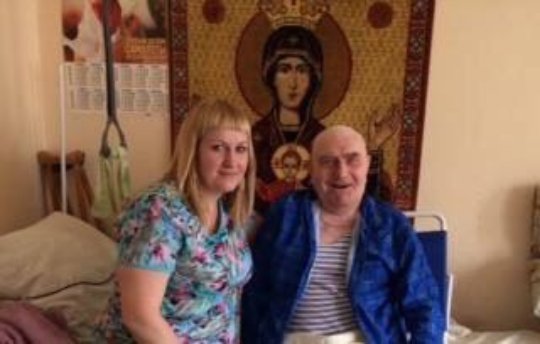 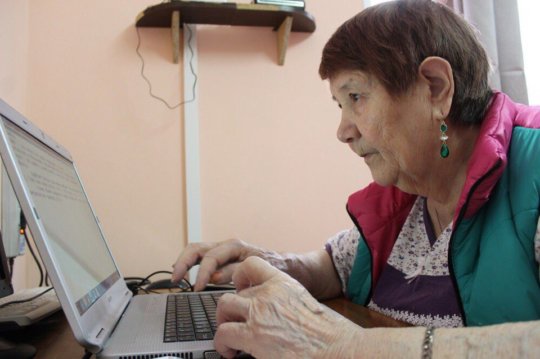 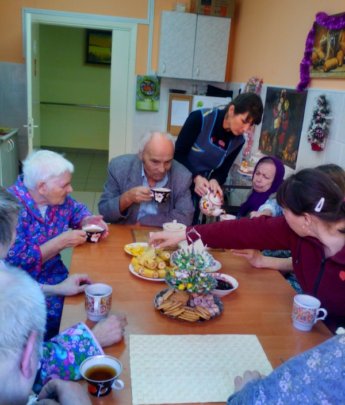 Evening tea in Tovarkovo
‹ 1 2 3 4 5 6 7 8 9 ›
WARNING: Javascript is currently disabled or is not available in your browser. GlobalGiving makes extensive use of Javascript and will not function properly with Javascript disabled. Please enable Javascript and refresh this page.