Turtles dont ask for much... 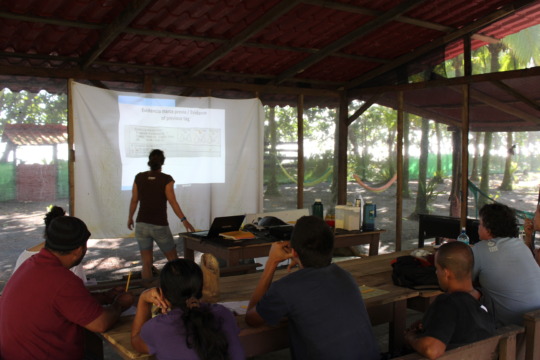 training session with our biologist

Many coastal communities across the globe rely on the oceans as a resource - and turtle egg consumption has long been a tradition - and a source of protein, for these communities.

So the challenge is, when,as scientists we travel to these communities, with the intention of setting up a research or conservation project.

It is extremely hard to tell people to stop doing what they have practiced for centuries - especially as outsiders. We can share our experience, make a proposal for a more sustainable way of life, for both humans and turtles, and we can offer environmental education - but we have no authority to tell villages what to do.

Our solution? Offer an incentive, an alternative income, an opportunity.

Rather than filling their community with outsiders to engage in conservation work, we can offer paid employment to locals, to work as guides. Who better to patrol the beach with us, than a poacher who has walked the beach for decades?

Who better to help train volunteers and research assistants about collecting sea turtle eggs, than someone whose family has depended on this on the past?

This year, we have received the services of 25% of the population of this tiny community - as we hope to continue next nesting season.This year also saw record numbers of green turtles nesting on Pacuare beach. This unfortunately brought many more poachers from surrounding towns, looking to take not just the eggs, but also kill the adult turtle for her meat. If we dont have the community behind us, if we werent patrolling the beach - then 100% of turtle nests, and possibly the turtles themselves would suffer the same fate.

However, its not as simple as it may seem. These locals need training, they need equipment, they need help to take them from illegal poacher to trained turtle guide.

If you can continue supporting our project, we can do so much more. Our hands are currently tied with the resources we have, but we are in urgent need of hatchery materials, tagging equipment, training equipment ..the list is endless.

the turtles dont ask for much - just the continued protection on the beach that they call home... 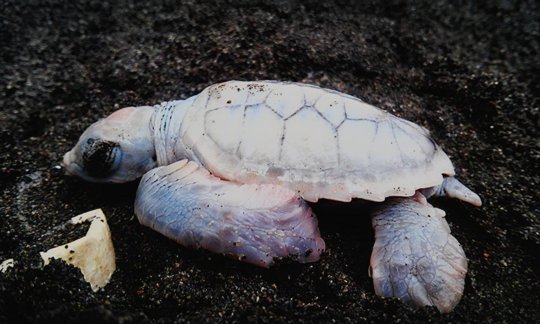 The end of the season in Pacuare beach is a time for us to reflect on our conservation actions, and create a strategy for the coming season.

It would be a pleasure to say that 2016 has been a roaring success - in some ways it has. But it has also been an immensly friustrating season for our on the ground staff.

Leatherback nesting activities were average - after the climate phenomena of el niño last year, this is fairly normal. In total we managed to save 112 leatherback nests from the beach which were relocated to our safe hatchery and guarded throughout their incubation.

However 102 leatherback nests were poached from the beach.  We are only steps ahead of people that illegally take the eggs for sale or consumption.

This time of year is green turtle nesting season, which comes with the added threat of not just the eggs being poached, but also the turtle being hunted for her meat. Our staff and volunteers must be extra vigilant on the beach - staying with the turtle throughout the whole nesting process to ensure that she safely returns to the ocean.

On average, we rescue approx 30 - 40 nests of the green turtle each year - but for unknown reasons, this year the hatchery has received 99 green turtle nests! This unexpected rise in turtle activity has put huge pressure on our station. 45 green turtles have been killed on Pacuare beach this year - and the local coastguard unit has managed to save 18 turtles from this same fate.

To combat this, more patrols are needed on the beach  - we have the objective of training more locals, recruiting more volunteers, and having more students involved in research.

Generous donations from GlobalGiving donors will help us to achieve this - but we still have a long way to go before the beach gets the protection it so desperately needs.

But its not all doom and gloom.

This season we were the witnesses to a rare albino hatchling from one of our green turtle nests! 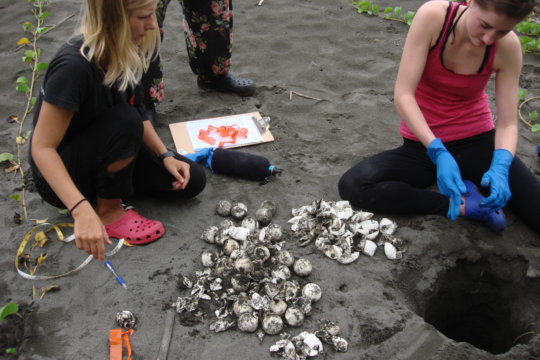 exhumation of a previously hatched nest 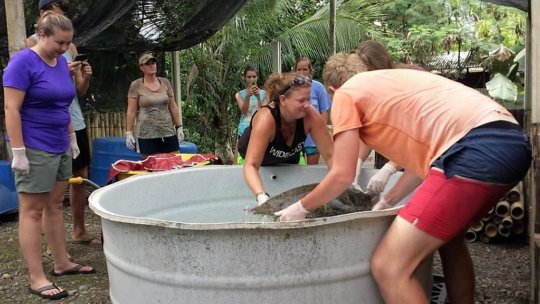 A huge thank you once again to everyone who supported our project in 2015/16.  All of the money raised through our Global Giving campaign was put directly into supporting sea turtle rescue and conservation. 159 donors took part in our cause and gave their hard earned money for endangered species. Finally, we have reached our fundraising goal and could close this campaign successfully.

How Global Giving has made a difference

Since start in September of 2015, our rescue center has been upgraded, as donations have helped to purchase essential supplies and equipment for sea turtle medical treatment. Currently, our logistics manager David is coordinating the necessary repairs of the center’s structure! Furthermore, funds could be raised for urgently needed boat and marine net repairs (ropes, buoyes, sinkers) and main conservation activities that are linked with the rescue center and habitat/population studies in the Dulce Gulf. A transport emergency fund could be created, if turtles needed to be relocated to the Marine Park in Puntarenas for more in depth treatment, as it was the case early 2014 when we had problems to finance transporting a green turtle with major trauma. Very importantly, our rescue center in Osa has served as a training and capacity building platform for volunteers, young veterinarian students and national and international conservationists and scientists.

Donor’s impact on sea turtles, research and conservation: During the last 3 months, our staff attended 10 hawksbill turtles with Stephanolepas parasite at the center. All were released after parasites had been successfully removed. Essential medicine like antibiotics, vitamins, glucose, eye oink and supplies like syringes, gloves, disinfectant etc. are now available for any cases that will show up. Longer term sea turtle patients can be kept in a tank more easily now using a filter system to circulate the water, as changing the water has been always hard as the ocean is 500 m away from the center. Light traumas and injuries can be treated immediately now which increases the chance of survival enormously as it allows our staff to act in the moment. During the whole time of the campaign, our conservation project hosted and trained 12 international research assistants, 378 volunteers from all over the world and 14 scientists and conservationists from Latin America. 39 green turtles, 3 with a missing front flipper and 46 hawksbill turtles have been captured and tagged. The in-water monitoring showed a higher presence of the critically endangered hawksbill turtle in the Golfo Dulce than in the years before. This shows that this species is loyal to its feeding and developing ground and that local conservation efforts may have resulted positively. Research is key to improve protection strategies, and latest results from the hawksbill study in 2015 with 50 individuals have generated an important data base. Based on that data, we can compare chemical blood patterns in national wild turtles with those of turtles in captivity, and improve their health status and develop an adequate diet, thus enhance the chances of survival. Global Giving supported the blood work and veterinary costs. Six local homestay families are taking part in our program by providing homestays for our volunteers. The positive impact on conservation goes far beyond our project at Playa Blanca. The rescue center helps to create awareness about endangered species and the environmental challenges they face nowadays, volunteers and students take their experinces with them and hopefully have learned to act in a responsible way towards nature, networking with other cross-country NGOs helpes to multiply our conservation strategies - this all to have a long lasting positive influence on sea turtles and their habitat.

LAST is not only active on the Pacific coast, also on the Caribbean coast of Costa Rica, where nesting turtles face a serious threat – illegal take and egg poaching. As this requires urgent attention, we have opened a new campaign on Global Giving to raise funds for the protection of 3 nesting sea turtle species at Pacuare beach, project # 24392.

We would greatly appreciate your consideration of supporting us in our efforts to increase sea turtle’s survival, either through volunteering, donations or by spreading the word and share the cause with others.

With our best wishes and much gratitude, 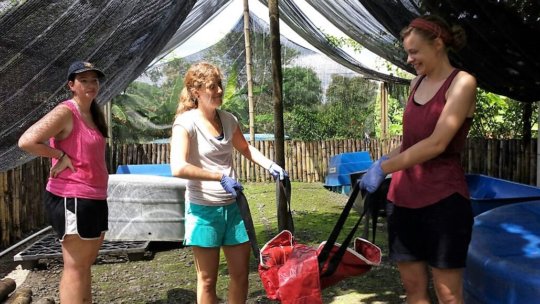 Rescue center after having released a patient 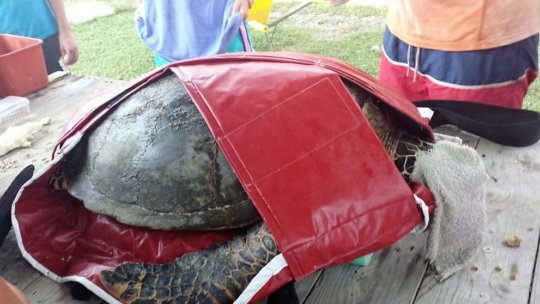 Donated turtle holder for a save transport 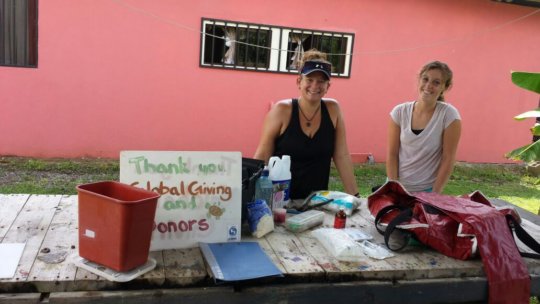 Staff with part of the donated supplies 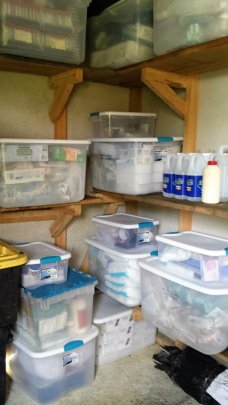 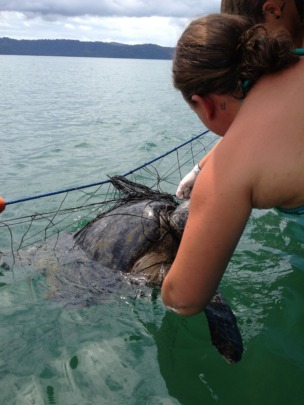 Capturing a sea turtle for tagging