The Discovery of New Species

By Roberto Pedraza Ruiz - Head of the Land for Conservation Program 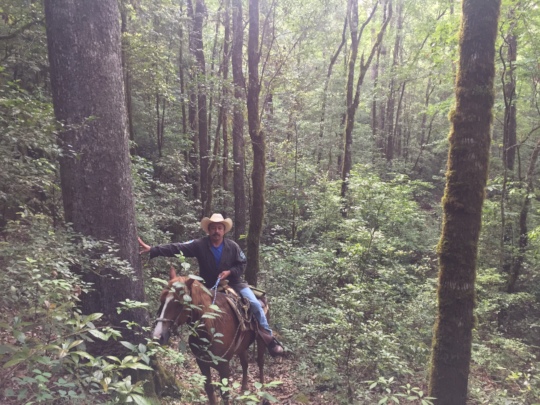 Abel Resendiz, Keeper of the Wild

Due to a wet winter and spring, during which cold fronts have arrived late and brought rain and fog, forest fires, which are undoubtedly the main threat to the integrity of the reserves, have been extremely weak.

However, despite the favorable conditions, a lightning caused a fire that consumed approximately 20 hectares close to the western limit of the Cerro Prieto reserve. Fortunately, it was attended to immediately by our park ranger in charge of the reserve and a group of neighbors who were cleaning a firebreak gap nearby. Therefore, it fortunately did not turn out to be a major fire, but only a creeping fire.

In other reserves, the continued presence of our park rangers allowed us to maintain effective protection of the forests.

Placing a camera trap in reserve #2, we were able to obtain three video clips of a puma walking on one of the trails. This indicates that we are providing effective protection to these forests, where big cats now find a refuge.

During this period, we also submitted proposals to purchase new properties and expand two of the reserves. We want to purchase two plots that are covered in ancient cloud forests, with populations of Magnolia rzedowskiana, one of the new micro-endemic species. We also want to expand the reserve of the Cerro Cueva del Tigre and eliminate clandestine logging activities that have been occurring on both properties, which are subject to the World Land Trust.

We submitted another proposal to the Dutch Committee of the IUCN to expand the Hoya Verde reserve by purchasing 57 hectares of temperate forests. In both cases we are still waiting for the approval.

A symposium for the members of the World Land Trust Conservation Alliance was held in the facilities of the British Trust for Ornithology in Thetford, Suffolk between April 16th and 20th. It was attended by Roberto Pedraza Ruiz, Head of the GESG’s Lands for Conservation Program, together with conservationists from 20 countries, all of whom are partners that make up the Conservation Alliance. It was a pleasure to attend the event, learn from experiences of others, strengthen ties, and explore future scenarios for the management of the reserves, in particular the issue of the succession and renewal of staff.

A small carnivorous plant (Pinguicula spp) caught the attention of Roberto Pedraza Ruiz in 2012 outside the reserves, but still in the area of influence of the Cerro Prieto, in the neighboring state of San Luís Potosí. He sent a photo to Dr. Sergio Zamudio Ruiz, who, without a doubt is an expert botanist and taxonomist when it comes to the flora of the Sierra Gorda and an authority when it comes to the carnivorous plants. In 2015 Pedraza Ruiz guided Dr. Zamudio to collect some copies of the species, and in March 2018 Dr. Zamudio and his colleagues published a scientific article in which they described 4 new species of the genus Pinguicula, among them the now Pinguicula robertiana, which is in fact a species new to science, as well as Pinguicula rzedowskiana, which is micro-endemic to the Cerro Grande. There is the possibility that both species have populations within the Cerro Prieto reserve. Another article described a new species of cactus, Mammillaria rzedowskiana, which is also micro-endemic, has healthy populations within our reserve, and we are proud to protect it.

These findings document the importance of protecting these forests, showing that an area like the Cerro Prieto reserve safeguards various species. 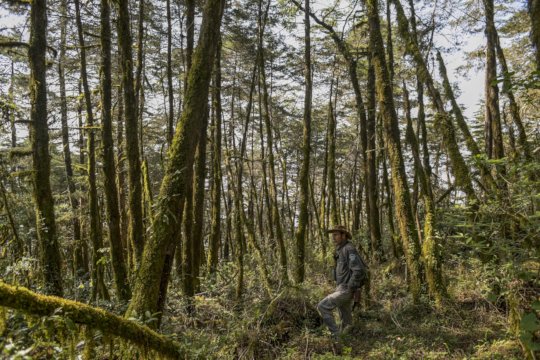 Miguel Flores in the Cueva del Tigre reserve
Attachments:
May 16, 2018 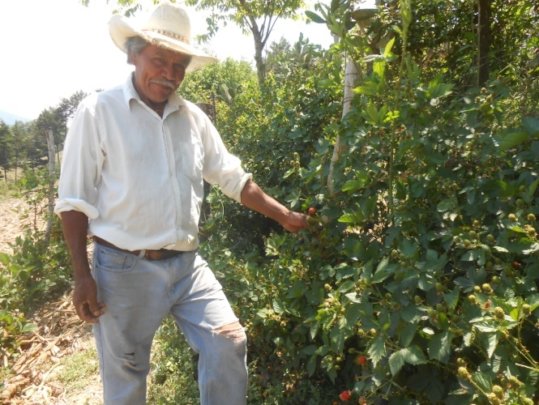 During this period we carried out 45 technical assistance visits, including a total of 50 agricultural producers and gardeners, who continue to implement regenerative practices. To date, 100 backyard gardens are maintained throughout the Sierra Gorda, including orchards. Therefore, the subsistence production continues to take place, providing economic benefits to agricultural producers and gardeners, who decrease their spending on some staple products since they have access to natural products, free of fertilizers and chemicals.

The construction of six greenhouses for the organic production of tomatoes in Tonatico, Pinal de Amoles has been completed and the production stage can now commence. It will benefit local families, who will be able to generate income by selling their product at a regional level.

We have been working to incorporate mineral compost to 110 agricultural plots. As a result, we have activated more than 200 hectares of agricultural land, where we have returned health to the soil and improve its productive capacity, while working in harmony with nature.

We continue to provide technical assistance to 26 pilot ranches in the states of Querétaro, Chihuahua, Guanajuato, and San Luis Potosí, incorporating minerals into the pastures, practicing planned grazing and infrastructure planning, and carrying out biological monitoring. 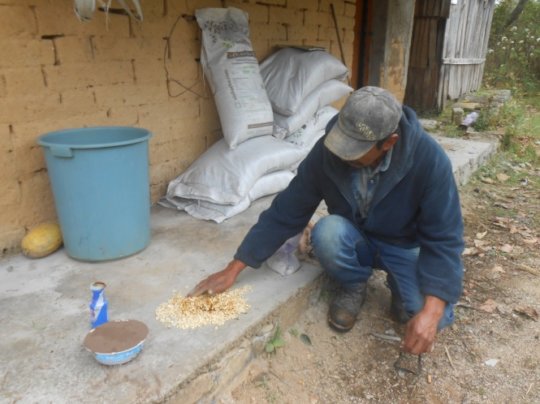 Preparation of seeds for planting in Tonatico
May 15, 2018 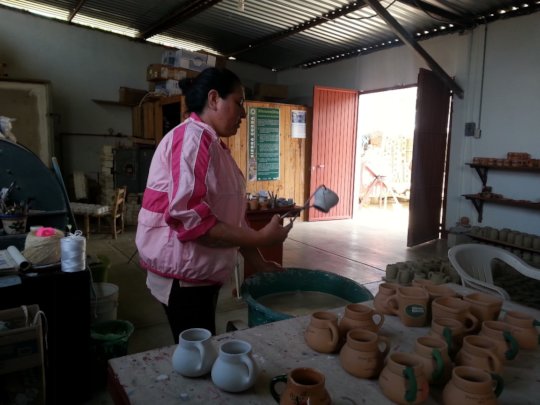 We made various visits to the artisan workshop, Las Mariposas, to evaluate the running of the workshop.  The clay mill had its defects and it represents the main part of the production process, which begins with the collection of compact clay in the community of El Lindero. The chunks are crushed and water is added, which is then strained to allow for the elaboration of a pliable clay mixture that is placed in the molds to form different pieces that are sold by the women of the workshop. Therefore, a defect in the mill can cause the production to stop. The equipment was serviced in addition to the band wheel together with some surface parts were replaced. Furthermore, preventive maintenance of the electrical installation took place.

Seeking to improve the business opportunities for the workshop, we helped refurbish the area to serve as a showroom for the products on sale as well as a kitchenette to offer hot refreshments and light meals. Repairs also had to be made on doors of the new eatery, grill, sink, and a gas pipeline were installed in the kitchen area, and tiles were laid in the service bar.

As a result, the workshop has a showroom for their products and a space to attend the groups that visit them at the entrance the ceramics workshop.

In addition to the usual activities of making molds and elaborating different products for domestic and ornamental use, important orders were delivered to various microenterprises in the region, including personalized coffee mugs to the Flavor Trail and tourist destination microenterprises known as Las Manzanitas, Comedor Sierra Bonita, and the Cave of Swallows.

During the follow-up visits to the workshop, we had the opportunity to learn about the “glazing” process, which consists of covering the piece entirely with a liquid layer, a lead-free solution that is used on all the pieces that are intended to contain food. Although the liquid is white, it becomes transparent with a shiny or matte finish once the pieces go through a firing process.

It is a pleasure to work with artisans, to collaborate in improving local conditions and building opportunities for a better future for the partners in the workshop and the community at large. 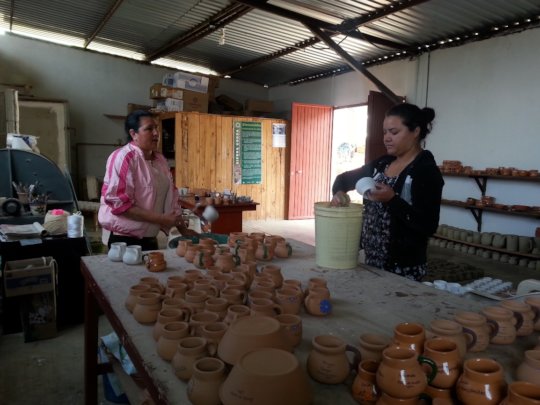 ‹ 1 ... 8 9 10 11 12 13 14 15 ... 25 ›
WARNING: Javascript is currently disabled or is not available in your browser. GlobalGiving makes extensive use of Javascript and will not function properly with Javascript disabled. Please enable Javascript and refresh this page.