We welcome you all with all our Hearts. 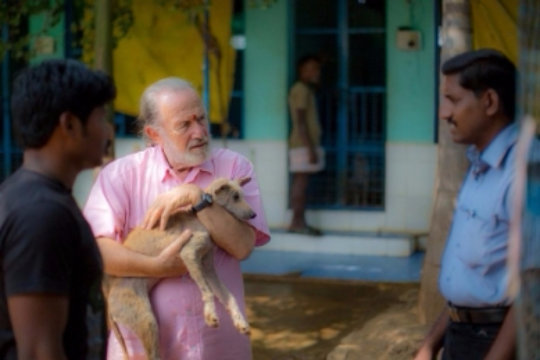 Hoping this finds each of you in excellent circumstances…May we all, all of us, without exception be blessed with insights that deepen compassionate understanding. May we, too, be gentler with and more supportive to each other.

The activity in the clinic seems to have leveled off for the hot season, which is now coming to a close…But it’s still way up there and keeping our three vets and veterinarian nurse very, very busy…Don’t have the final May stats, yet…But we had between 600 and 800 visits to our clinic…Also, Pandi and Vishwa went out on over 100 emergency rescues…

This last month I wrote the Chairman of our bank (the largest in India) for her intercession on the timely processing of wire transfers. In the letter I wrote a short blurb to give her a sense of the specialness and importance of our work…I really liked the way it came out…

Don't know if you're animal lover….But our Work really is important and this does affect us. We have a hospital, clinic, 24/7 hour rescue service, and an effective adoption program.  We are a no-kill shelter that gives hospice care to dying creatures....Our clinic has 800 visits each month, and we have had 34,000 since our opening in 2007. Our hospital has given 99,000 treatments since opening. We go out 100 km. to find good homes for our rescued puppies, and have placed over 800 in homes since opening. We have gone out on 3,300 rescues...And we treat any creature in need. Since opening we have treated over 3,000 animals other than dogs--cats, cows, horses, goats, eagles, peacocks, squirrels, monkeys, birds, and many others...All services to homeless and wild animals are free. Services to all people unable to pay are free. To those able to pay, there are modest charges to cover the cost of the medicine--however, no animal is refused treatment if its owner does not pay...And, we have one of the best surgeons within 150 km. The Gov't Veterinary Hospital that treats large animals brings all their complicated operations to him. And the Forest Dept. brings all their serious cases. We are supported by private donations. Om Namah Shivaya.

Have once more chosen a selection of photos that will give you a whiff of the Heart in our beloved Shelter…Our core practice is Demonstratice love: Hugging. Touching. Stroking. Reassuring. Kissing.

Please…Keep your support coming…We need all the help we can get.

Just got word that Global Giving will match one month's donation for all new recurring donors between Monday,June 17 and Friday,July 1 Eastern Standard Time...To qualify the donation must stay in force for four payments...Om Namah Shivaya.

With love and thanks...And wishes for everything, good, 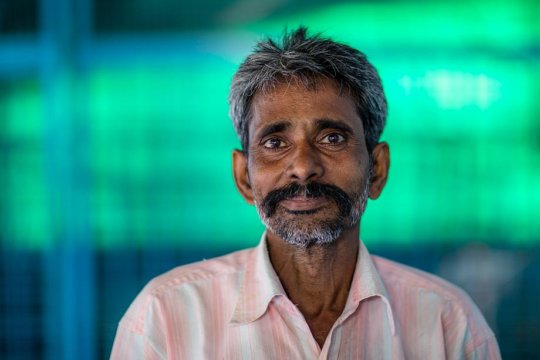 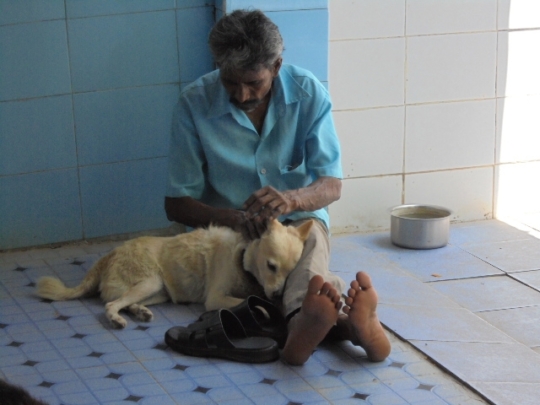 His Heart really is Pure. 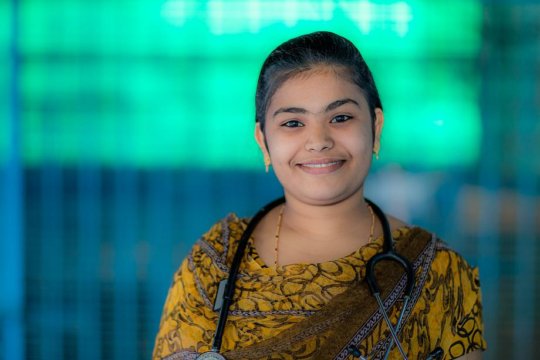 I also like this shot of Dr.Heera.What a blessing. 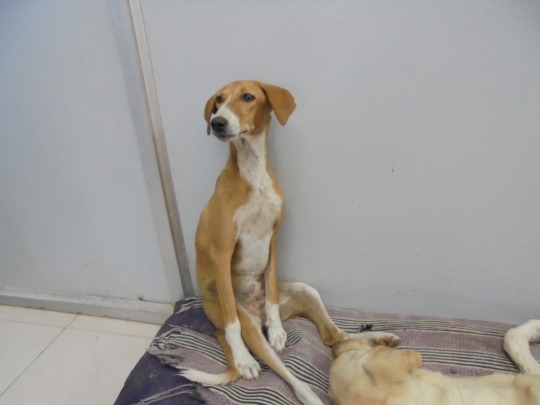 I'm proud to be a streetdog. 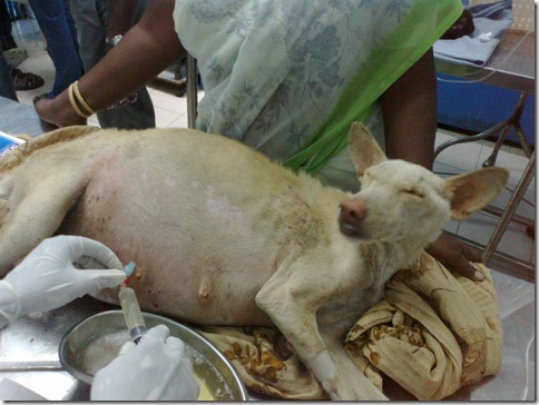 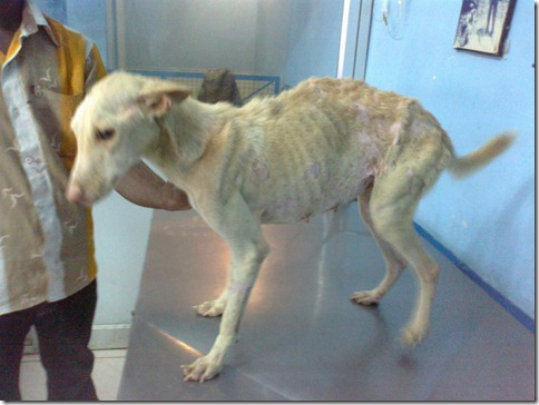 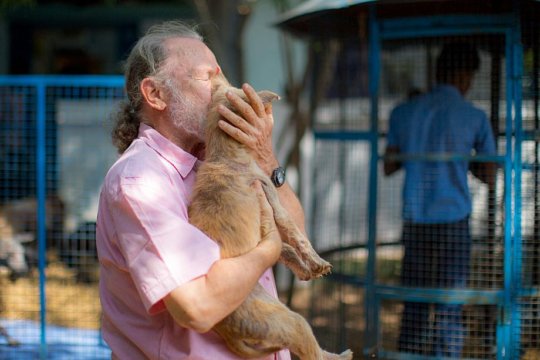 Now that's what I call a kiss! 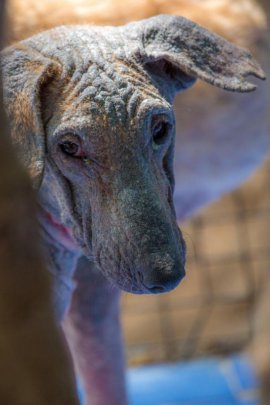 They say I'll be fine. 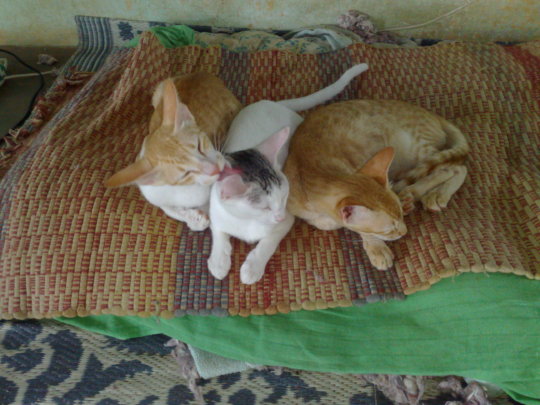 This ones for you catlovers...Om Namah Shivaya. 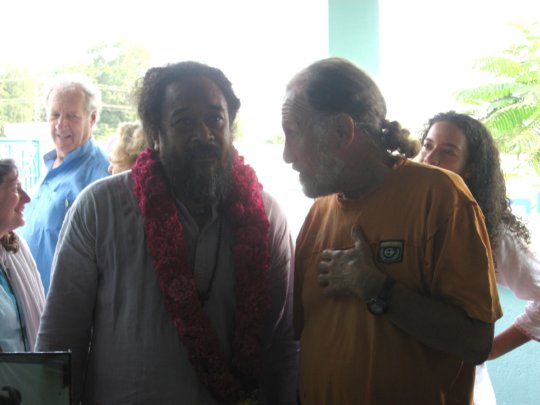 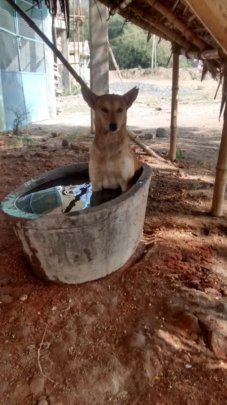 Oh Yeh!!! Who sez for drinking water, only?

Namaste’ is an Indian way of greeting. It is delivered with hands clasped in front of you. And it’s esoteric meaning is “I bow to your Innermost Self”.

Hoping that each of you are doing beautifully…May we all, all of us without exception, be blessed with insights that deepen compassionate understanding. May we, too, be gentler and more supportive to each other.

We have had an auspicious increase in activity in our beloved Shelter. This is happening because people’s Hearts are opening to the Voiceless Ones. And they’re becoming more and more caring. This is reflected, too, in the number of monthly clinic visits and in the monthly emergency Rescues. It’s not that there are more creatures in need of care. If  anything, historically there were many morel. It’s that people are moving for them and getting them to us in their suffering.

Each year the relationship between the animals and the people amongst whom they live gets better and better. You can experience the change as you walk around town. But this year, in particular, we have passed thru some "critical mass"...and it has really surged. Om Namah Shivaya.

We were able to hire a third vet. He has post grad work in surgery and clinical experience.

We also have three more Staff...And, wonder of wonders, this very week a lady named Elaine is joining us...She's a veterinary nurse, schooled in England, and has forty years experience. (I've never before heard of a veterinary nurse in India). She is totally, and I do mean totally, devoted to lifting suffering from street dogs. It is at the center of her life...She's been in India for ten years...And circumstances concerning a homeless dog, brought her to our Shelter. Both Dr. Raja and I were there when she came. And as we spoke to her, both our antennas started vibrating...So when she said yes to my invitation to join us...Both of us almost quietly cheered...Om Namah Shivaya.

Hope you enjoyed the February newsletter...There are a lot of inspiring stories always happening. We tend to put too many in. Cut three the day before sending. Got it down to a reasonable size. (Just found out from my daughter that they have to be viewed on a laptop or computer...Many of the videos don't load on the handhelds.)

Have once more chosen a selection of photos that gives a whiff of the most important thing at our beloved Shelter…HEART…Most of all, take a look at the last newsletter we sent. We’ve included it in “Links”, below…Our newsletters are really, really special. I think you will not have ever seen anything like them. And they’ll give you a real feeling for our core practice---Demonstrative love: Hugging. Touching. Stroking. Reassuring. Kissing…If you like it, you can sign up for them right at the very end.

Please…Keep your support coming…We need all the help we can get.

With love and thanks. 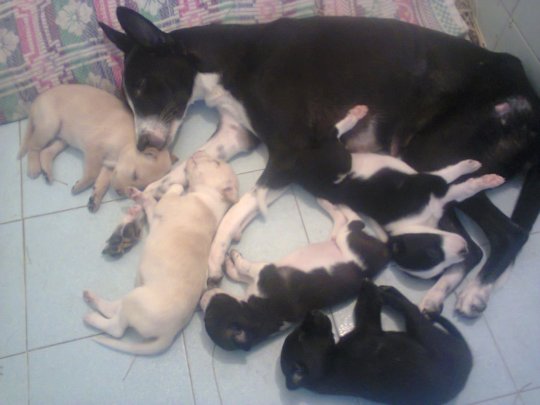 Sometimes there are no words for scenes like this. 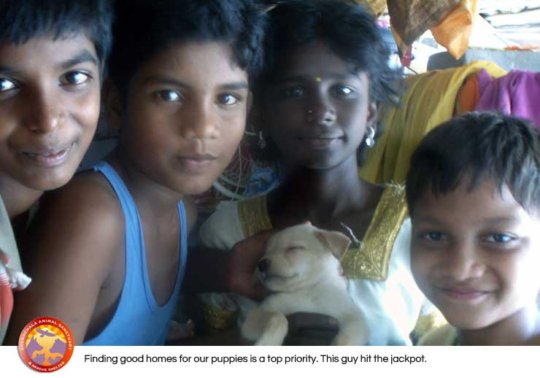 Going to a real home! This guy hit the jackpot. 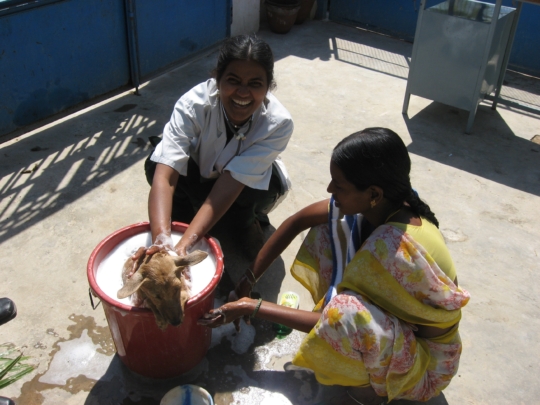 Getting a bath from Dr. Pushpa? Very good karma. 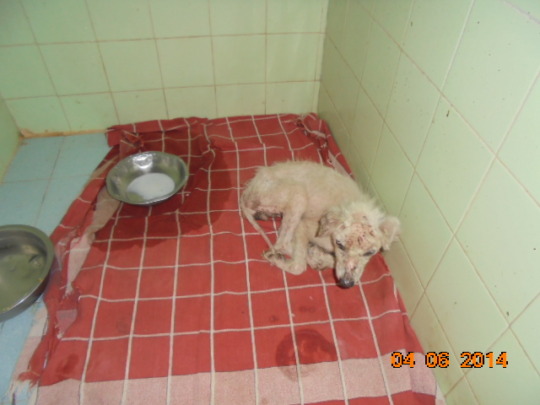 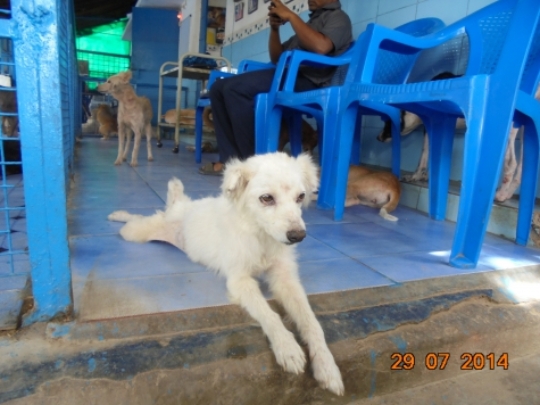 Leela...Welcome back to life dear Little One. 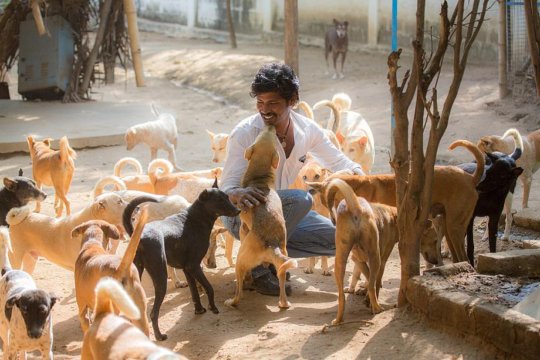 They simply love him. 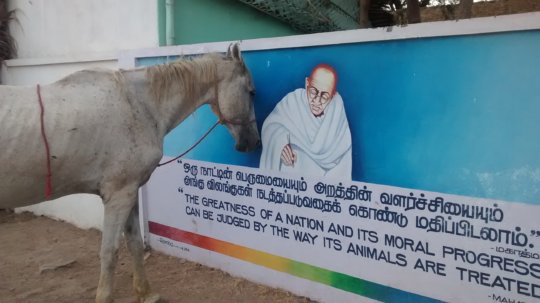 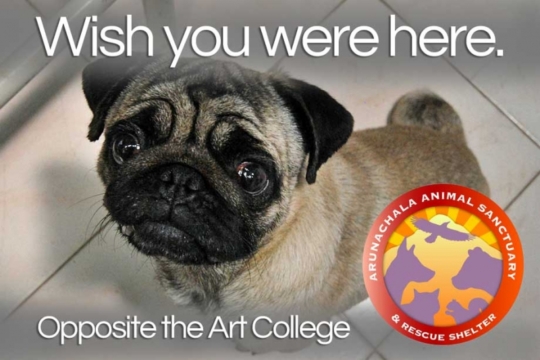 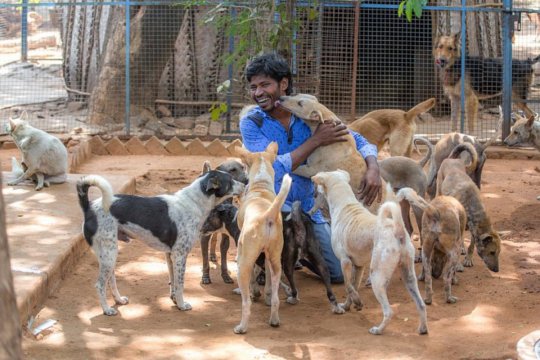 They simply love him.

This is our first progress report. I think most of you know that our core practice is demonstrative love. Hugging. Touching. Stroking. Kissing. Reassuring...

Had a very sweet rescue last night. 9:30pm. Was going around Arunachala (the sacred mountain, here) on my Honda Activa to clear my mind. Always carry a napsack of large biscuits with me to feed the Homeless Ones. Tossed one to a male dog that had a bad skin condition caused by a fungal --no hair..skin black. Called Vishwa, our Director of Operations, the one who makes all the animals melt. He was at home seven miles away. Didn't know if I could keep the dog engaged that long. Sat down on the curb next to him. It was pretty far out and unpopulated..Started feeding him Pedigree. After several minutes I gently touched his back and he recoiled a little, but kept eating. Then I waited a few minutes. Finally he surrendered to my touch and I started stroking him.And then massaging his hips. He really liked it. He'd clearly had a hard time for several months.Talking gently to him, I bent over put my hands on either side of his face and kissed his brow. I knew it'd been a long time since he'd received affection. And he melted and gazed up into my eyes...Vishwa showed up. Slowly walked up and sat on the other side of Alfie (we named him Alfie). Sometimes it amazes me how good Vishwa is with animals. How they instinctively love and trust him. His vibration is purity, itself. Well, I stroked Vishwa's arm a few times so Alfie would see he's a friend...And within three or four minutes Alfie was primarily relating to Vishwa. Now I'm very, very good with animals. But Vishwa is very, very, very good. Then Pandi and Prem arrived on a motorcycle...Pandi gently tied Alfie's mouth as Vishwa was holding him...His tail was wagging throughout...Vishwa laughed and said it was because he was massaging his hips. Alfie's in the Shelter now. He'll be with us for a few months. And then with a full, healthy coat, he'll go back to his territory where he'll be most happy. I'm going to include a photo of dear Alfie, below.

Wish you all could see the inside of our beloved Shelter. It would gladden your Hearts. Our staff is devoted and loving. The dogs and puppies are not kept in cages but run free and are happy. .

Hoping the selection of photos gives you a whiff of the most important thing...HEART....Most of all, take a look at the newsletter we just sent. We've included it in "Links", below...Our newsletters are really, really special. I think you will have never seen anything like them. And they'll give you a real feeling for our Work...If you like it, you can sign up for them right at the very end.

Please...Keep your support coming...Spread the word Dear Ones...We need all the help we can get... 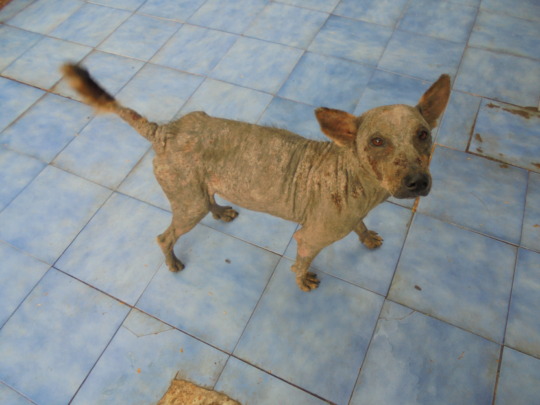 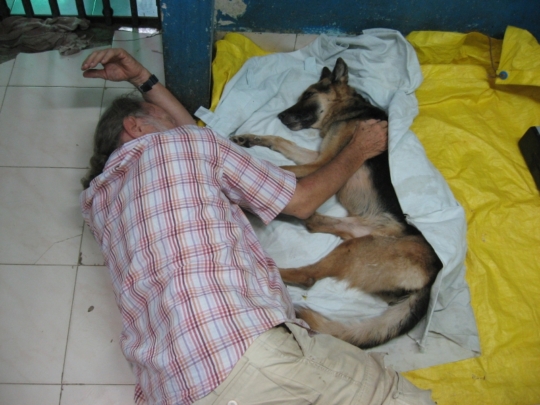 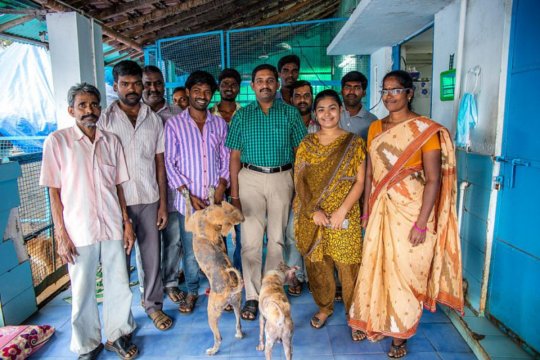 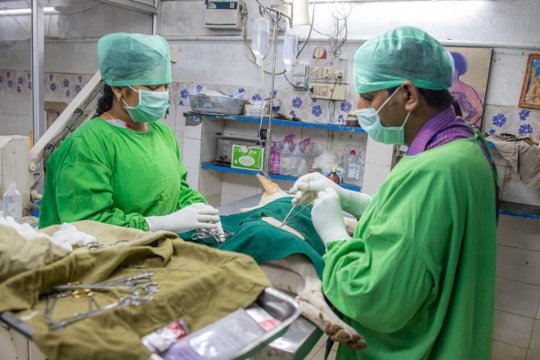 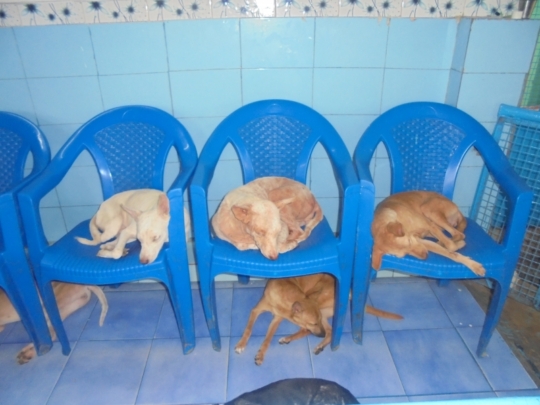 I thought we got more chairs for people. 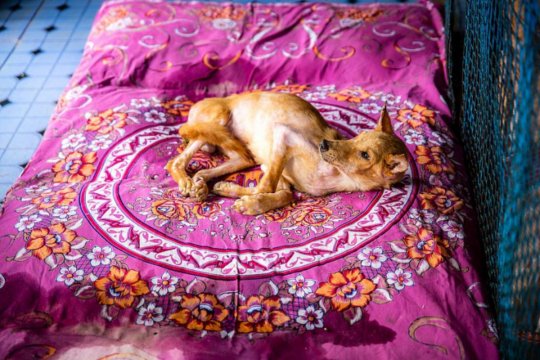 Nothing too grand for a Duchess.