Advantages of Education for Kids in Afghanistan

The education of children and women in Afghanistan is an emotional cause, with humanitarian urgency. But if you follow the numbers, it’s easy to see a ripple effect that impacts the entire nation – educating kids has advantages for the whole country.

The highest infant mortality rate in the world: for years, Afghanistan held that tragic distinction. The prevalence of conflict, widespread poverty, limited access to health services, and a lack of access to the schooling and cultural rights over decades compounded, resulting in devastating infant mortality statistics. In the year 2000, the Taliban had been in power for four years, and almost 100 out of every 1,000 babies1 born in Afghanistan did not live to see their first birthday. And the children who survived infancy were faced with very limited access to education.

But with the past decade and a half, under democratic rule, the infant mortality rate has been improving dramatically. Ferozuddin Feroz, Afghan minister of public health, said2 one of the difference-makers has been a nation-wide focus on recruiting, training, and deploying thousands of community midwives to rural areas, places with limited access to hospitals of doctors. As of 2002, only 400 such midwives existed. As of 2016, that number was over 5,000.

When girls and women have access to education, they gain more sovereignty over their own reproductive healthcare. This, in turn, has a significant positive impact on the health and longevity of their children – of Afghanistan’s children.

Taliban or poverty: the unspoken problem of the youth bulge in Afghanistan

As NATO troops pulled out of the country and the inflow of foreign money began to shrink, Afghanistan’s economy went into decline – and with it, the job prospects of millions of young people. Afghanistan in 2019 is in the midst of a “youth bulge”–currently, 68% of the country is under the age of 253, and the population is expected to reach 50 million people by 2030. This nation of young people is struggling to access education, and the career opportunities that come with that education often lie just out of reach. As they struggle to find jobs, Afghanistan’s youth population is at risk of being taken advantage of by the Taliban and other extremist groups.

A commonly misunderstood fact is that often, youth do not wish to join the Taliban – they do not do so out of philosophical or religious regions, or because they agree with its radical cultural values. Many times, young Afghans join the Taliban simply because it is the better option to unemployment, or living on the streets. As Al Jazeera describes4, the Taliban often offer twice the monthly salary of the Afghan army, and even pay young men with gold to join their ranks.

As a last-ditch effort to find work, hundreds of thousands of young people are emigrating to other countries – in the first half of 2015 alone, 80,000 Afghans applied for asylum5 in Europe.

As the youth in Afghanistan increase in number, the life-and-death nature of getting an education sharpens in focus and urgency. And sadly, the hopes and dreams, fears and aspirations of Afghan youth often get lost in the oversimplified narratives coming from most TV coverage. Especially in the western world, it is common to hear only of violence, migrants, and religious rule. By telling the stories of individuals and unique communities, Central Asia Institute hopes to share the deep humanity of the Afghan children’s plight. Backed by critical data, these stories also show the impact education has on national stability.

The advantages of education for the country’s children include opportunities to step out of poverty, open businesses, grow the country’s economy, find alternatives to joining extremist groups, and make the country and its population safer and more prosperous overall.

Schools also provide a safe haven for impoverished children. Especially in rural communities, where access to clean water and sanitation is sometimes a luxury not afforded many neighborhoods, attending a school in which clean water, reliable heat, and a safe bathroom are part of the facilities makes a big difference in kids’ quality of life. And when those schools also offer the safety of a protective boundary wall, the hours a child spends in attendance can provide health and safety benefits as well as mental ones.

Worldwide, more than 170 million people could climb out of poverty6, if every child from developing countries learned at least basic reading skills before leaving school. Imagine the exponential increase in benefits if those children also learned a trade, or math skills, or the basics of starting a business. According to UNESCO7, an extra year of school can increase someone’s income by 10%. For girls, that extra year of education also decreases a woman’s chance of becoming a young mother by 7.4%.

The Afghan economy is not keeping pace with its children coming-of-age and entering the labor market. With reports8 of only 49% of males and 18% of females able to read and write, and 35%-40% unemployment rates, the success or failure of the nation’s future rests on the education of its youth.

In more developed countries, the benefits of educating children include improved social skills and attention spans – in Afghanistan, and education can mean the difference between finding a job and being forced by unemployment to join the Taliban. Access to education means girls are healthier, live longer, and are less likely to be forced into early marriage. And building safe schools in rural areas means the forgotten youth of the high mountains and lonely deserts have a way out of poverty, into hope.

The Future of Afghanistan Depends on Education 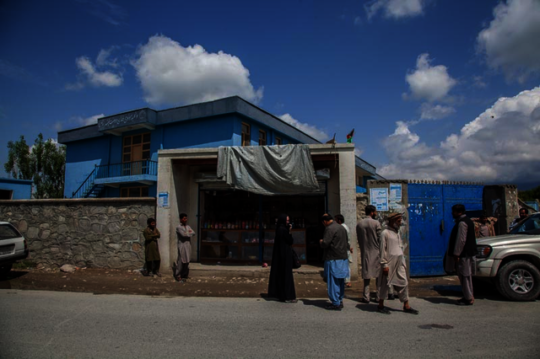 “The only way to prevent Afghanistan from going backward is education.”

These words hung heavily in the hot air of a teacher’s lounge in a small village in Nangarhar province last year during a conversation about the future of Afghanistan with CAI Communications Director Hannah White.

They were spoken by Muhammad Asif, an Islamic Studies teacher for grades 9 – 12 at Khodi Dust Girls’ Higher Secondary School. Muhammad is passionate about education, and he truly believes it is the only thing that can save his country.

Muhammad was born in this village, but his family moved just over the border to Pakistan where he lived for 18 years when the war in Afghanistan got too dangerous. There he studied Islam before returning back home to raise his children. Now, the Pakistani government is discouraging non-citizens from attending their schools and private schools are too expensive. He brought his family home to receive educations and to be a teacher himself.

“I work for the children, not for the salary,” he says.

We don’t usually spend time considering the impacts of human choice unless our power to choose for ourselves is taken away. But for many young women living in Central Asia, the right to choose how their lives unfold was never an option. Whether dictated by culture, circumstance, family, or poverty, their paths are often already set. These young women may never make their own decisions about their career, their spouse, or even how they spend their days.

It’s all too common for women in Afghanistan, Pakistan, and Tajikistan to surrender their chance for education and career to help their struggling families, frequently by marrying an older man or working as low-wage laborers.

But self-determination is a dream that many young women hold onto. And for the hundreds of women who received scholarships each year from Central Asia Institute, choosing education over old cultural norms allows them to discover their own power, their own ability to make the world a better place.

Whether in your own community or by lending support from afar, you have the opportunity to help these women exercise their right to choose the path their life takes. CAI works hard to identify and give financial support to women of all ages – pursuing their dreams of education in Afghanistan, Pakistan, and Tajikistan. And for a Tajiki teacher approaching the age of 50, the chance to make her own life choices is more important now than ever.