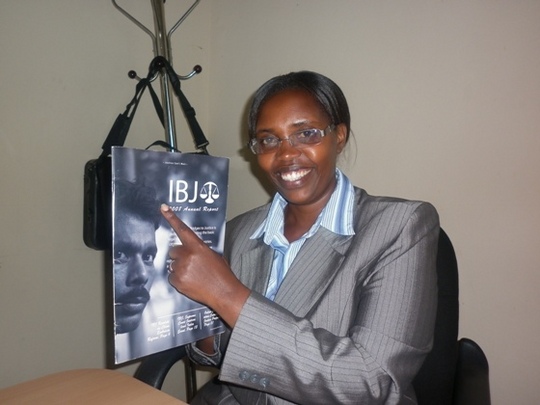 Dative Mujawamariya is one IBJ Legal Task Force Lawyer who has been relentless in her efforts to facilitate access to justice in Rwanda. Dative participated in the two IBJ trainings and attended mentoring sessions at the Kigali CDRC, which she indicates have greatly helped her develop and assert her legal skills. She agreed to volunteer with IBJ and has already taken eight cases.

On August 11th 2010, Dative took on the case of a 27 year-old-man accused of rape. The man, whom we will refer to as Mark, is an impoverished cattle keeper. He was accused of raping a neighbor’s daughter. The key witness told police she had seen the girl in Mark’s bedroom holding money worth 50 Frw, the purpose of which was to buy her silence to her parents.

Mark was arrested by the police on July 2nd, 2010. He spent over a month in custody without ever meeting a lawyer and with no hope of being summoned to court. Then, the key witness came to visit Mark to apologize for having lied to the authorities and wrongfully accused him. She confessed that she had been promised 20,000 Frw by the victim’s father.

As Mark was facing a life sentence, Dative came across his case during one of her routine visits to the prison where he was being held to search for prisoners in need of legal aid. She read the medical statements in Mark’s file, which provided evidence that the crime had never been committed: medical tests on the young girl showed no signs of sexual intercourse.

Dative went on to solicit a trial date, and although the court calendar always seems fully booked, she was lucky enough to secure an August 26th date. The trial was subsequently subject to further delay, but this allowed Dative to compile compelling evidence against the prosecution’s case.

On the trial day of September 2nd, the case was heard, and that same day Mark was able to walk home following his acquittal. This victory – winning an innocent man’s life back – is one case among many that have given the volunteer legal defense team the courage to continue to fight.

Attachments:
‹ 1 2 3
WARNING: Javascript is currently disabled or is not available in your browser. GlobalGiving makes extensive use of Javascript and will not function properly with Javascript disabled. Please enable Javascript and refresh this page.