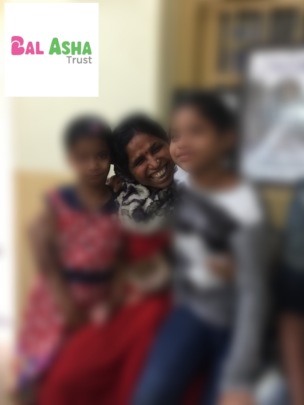 Today, the world boasts of connectivity and information-tracking, and yet, there are a few instances that happen, that makes one stop to ponder the gravity of it all. One such story is that of Sia (8 years old) and Nani’s (4 years old) – two little girls who accidentally boarded a train from their village and found themselves in the great big city of Mumbai, 2000 kilometers away from everything they knew.

The Railway Police found them roaming the station and tried to question them. However, Nani was too young to be of help and Sia, a deaf and dumb special child, could not coherently indicate the location of her home. The officers took them to a government-run orphanage while the police and authorities spent the next few months searching for information and whereabouts of the parents.

One fine day, Bal Asha’s social worker named Vaishali was visiting the government home and the concerned official at the home introduced her to the two girls and felt an instant connection with them. She assessed the children’s needs and realized that the government home was not equipped to adequately care for Sia. Vaishali immediately knew that Bal Asha Trust was the only place where Sia will receive proper hearing and speech assessments and be able to attend special schools. Moreover, Bal Asha also aids many government homes to find lost homes of children. A few weeks of mandatory paperwork later, Sia and Nani had moved to their new home – Bal Asha.

Since the staff at the organization is expertly trained, they immediately understood that the children were inherently happy children, which means that they were not forcefully abandoned but must have reached Mumbai by an unwanted twist of fate. They gave Sia a thorough medical evaluation for her special needs and soon enough, the young girl was sporting a hearing aid; a device she thought was inconvenient initially but grew to love, for it meant that she could hear and distinguish between different sounds. Sia was enrolled in a deaf and dumb school whereas Nani started attending a regular pre-school.

As per standard practices set forth by Bal Asha Trust, the children were taken to get registered under Aadhaar – a biometric system mandated for identification purposes by the Government of India. The process went smoothly except for one minor hiccup which came later. The organization’s superintendent received a message saying that Sia’s enrollment was a duplicate. This meant that she had a family that had already enrolled her in the system previously.

This information acted as a guiding light for the team and gave them hope that one day, they would find the lost parents. Sunil, Bal Asha’s director reached out to the concerned authorities for information on the children but it was like finding a needle in a haystack. The officials were unable to be of much help due to privacy reasons. However, he persisted in their search and spent immense time and effort in conveying to the officials that finding relevant information was indeed, in the best interests of the child. Finally, the authorities decided to share the registered details.

Typically, an address and phone number can be obtained but in this case, only an address had been registered. Never giving up hope, Bal Asha members immediately reached out to friends in the state where the address was based and requested them for help. A few of them close to the address travelled to the village and asked around about the girls. Apparently, everyone in the village knew about their disappearance despite the fact that it had happened a number of years ago. The villagers were more than happy to show the visitor the family’s home. After checking and verifying that the girls indeed had disappeared from their house, contact details of Bal Asha was given to the parents.

The couple eventually travelled to Mumbai, where the team cross-checked their documents to ensure that all was in order. Then, they arranged for the parents to meet the children. The two girls immediately recognized the parents and rushed into their arms. It was truly a victory for the girls, their parents and everyone else who had worked hard to actualize this day. Tears were streaming from many eyes and the room swirled around in a sea of positive emotions.

The parents shared they were ordinary vegetable sellers near the railway station in Bihar and the children has unknowingly wandered into a train and set off their journey to Mumbai. Their police complaints were unable to trace the girls and they had lost hope of ever finding them. They were eternally grateful to Bal Asha Trust for bringing happiness back into their lives.

Another reunion of this kind also occurred later in next few days where the child was reunited with family in Odisha. The staff members maintain that proper procedure and indestructible hope is necessary in these situations; hence, registration with the Aadhaar system becomes of paramount importance, a fact that was covered by various media outlets when this story was released to the public.

The team at Bal Asha consistently strives to be able to provide excellent care and service to all the children whose lives it touches. Sincere effort and a little luck brought these girls, Sia and Nani, back to their parents, and restored faith for many in the interconnectedness that the Indian economy promises its citizens.

Please do support Bal Asha and its efforts with a recurring donation. 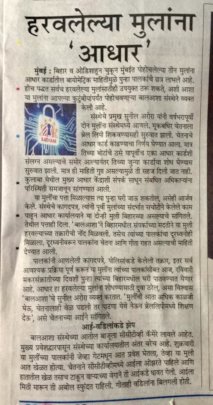 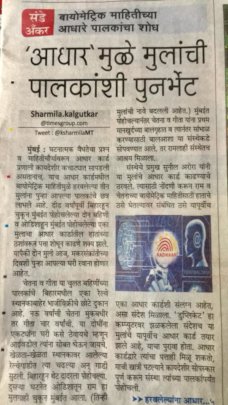 A home for every child 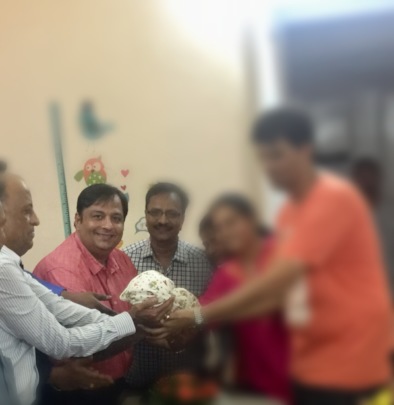 Sunil with the family

Bal Asha Trust completed 32 years of yeomen service towards helping vulnerable children in India. The past few years have seen us grow from strength to strength which would not have been possible without the support of each one of you.

Our work has not only focused on quality care for children while they are in the institution, but providing them development and rehabilitation, so that they do not remain in institution without a family.

Earlier we had shared story of a child who was reunited with his mother on 18th September 2017.  Today we are happy to share that we placed two children with Adopted families.

Child “D” & “K” received admission in Bal Asha when they were few days old.  Along with quality medical care they received lots of love and care from our caretakers and nurses.  They were one year and 5 months respectively by the time we placed in them in legal Adoption with two wonderful families.

The families were thankful to Bal Asha and for the care received during their stay in Bal Asha.

We thank you for your support so that we can keep giving required interventions to children.   We wish you and family a great festive season.

We appeal to you to make a donation to Bal Asha this festive season month for us to find home for every child. 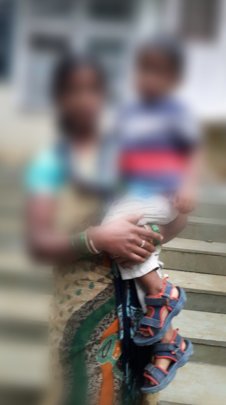 Thank you for support!

The primary motive of the team is not only to provide quality care, but at the same time make efforts to restore them back with their familes.

It was like any other ordinary day at Bal Asha with routine work as usual when a mere phone call put everyone in a state of  tizzy and some hurried activity and alertness. The Executive Director Mr Sunil Arora received a phone call at about 11 am from a central Mumbai police station whether they had received any child at the institution aged 2 – 3 years in the last 2 days to which he replied they had not. The police then went on to give further details about the missing child for whom a complaint was received from his heartbroken parents.

The team immediately without further ado phoned police station  and gave them information and description of the boy in our care. The description fitted the missing child but still BAT team wanted to be doubly sure . The police did a home visit of the mother and posted photos of the mother and sister which the social worker showed to the little boy on whats app. The boy who upto now had not uttered a single word uttered the word “amma” (mother) and had a different expression on his face.

The boy was finally restored to his mother with permission of the authorities and all ended as it was meant to.

In the last few days Bal Asha team was able to rehabilitated 2 children back with their families.

I appeal to you to continue your support to Bal Asha Trust so that we can continue to provide quality care while the children are in our care.