Painting a City with Feminist Wall-Paintings. 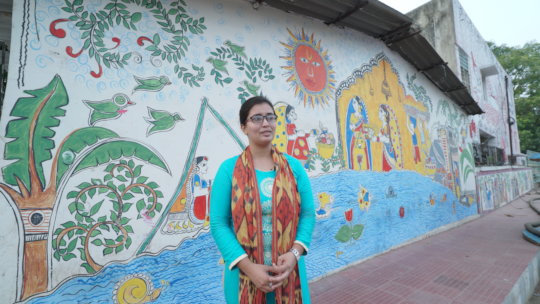 Very recently over 100 artists from in and around Patna came together to paint hundreds of Madhubani murals across the capital city of Bihar. This was part of a social experiment to put messages in the public domain about the potential of women at work in new careers, enterprises and new roles. It was also to take on the city’s overwhelming cleanliness problem and say ‘we can clean this up’.

Through the paintings, the city hoped that Madhubani art, being Bihar’s most well-respected art form would motivate us all to stop littering and defacing the city.

For a moment, Patna has been transformed into a living and breathing work of art.

We, Going to School, were in Patna to understand where the paintings came from, who they were for, what their messages were and were on the way to Madhbubani, the source of where the feminist art-form that originally used organic colors came from.

Back to Patna, this initiative by the Patna Municipal Corporation and Patna Smart City Limited, called ‘Mithila Meets Magadha’, aims to cover 600,000 feet of public space. In this first phase, artists worked collectively and took 90 days to complete the paintings.

The murals tell stories of the undying spirit of art and the power of collective action led by women. We can clean this up.

Many tell stories from Indian mythology and the sacred texts such as the Ramayan – which is also what Madhubani art is known for.

For example, artist Nutan focuses on the theme of women’s empowerment. Her painting shows women as self-sufficient and equal contributors to society. She wants to show that women can work together to create change. Pawan and Deep want to raise awareness about climate change. Pushpa's art tells the story of freedom because she has felt trapped. She survived cancer, four girl abortions and now lives as a single parent with mental health challenges. Rahul made a mural that shows equal voting rights for women and men. Ranu wants his art to inspire design thinking and social awareness and be used on the right products. Ritu's story is about devotion – devotion to your purpose. She also believes that a painting can communicate whatever it wants to, to the viewer.

Rohit wants to use his art as ‘protest art’. His mural about nature and the forest talks of lives being destroyed by global warming and climate change. Rupesh's painting talks about yoga and the importance of physical exercise for a healthy mind and body. Usha's story is about empowering women to earn and through this lead a revolution. Vinod's work shows singularity in nature and uses monotone colours to convey this.

All the art is characterised by bright, vibrant colours, usage of natural dyes, and particular motifs and elements very important to Madhubani paintings. The fish, leaves, big eyes, geometrical patterns, kachni and bharni technique and one side of characters’ faces.

What skills did the artists utilise to create the murals? While the artists spoke of the challenges they faced when creating the murals, they did give an insight into the many skills required as a Madhubani artist, apart from the obvious such as knowledge of colour, and knowledge of the style of painting.

Nutan said she had to learn how to make a plan. She was also involved in building teams, taking on a leadership role, and had to learn diplomacy on the job. She learned responsibility, taking an initiative, taking a risk, time management and multi-tasking. She also learned how to be doting but firm. She will soon travel to Australia, Singapore and Indonesia for an international assignment. Rahul used his public relations skills and ability to work well with others to build team unity and overcome obstacles. Hard work, confidence, technique, patience and determination are skills common to many artists.

While there is much work to be done with regards to earning a living from Madhubani art, some are able to sustain themselves through it. For example, Premchand pays his college tuition fee of INR 75,000 through the art he creates for clients. Pushpa earns a living through Madhubani art and supports her daughter as a single parent.

The people of the city are seeing a difference in general behaviour. Citizens and traders say there is less litter. Not everyone knows the significance of the paintings but they appreciate that it has changed the mind-set of the public.

On the other hand, artists have a burning desire to use their art and this opportunity to effect a change, however small. One of the most powerful changes, according to someone we chatted to walking by, is that people feel that that the paintings have beautified the city so much that no one has the heart to dirty it again. People revere Madhubani art and the mythological characters from Indian culture. In the past, people would put small pictures of gods and goddesses on walls to prevent people from using it as a toilet. Most of the times such tactics did not work. Hopefully the size and extent of these paintings will. 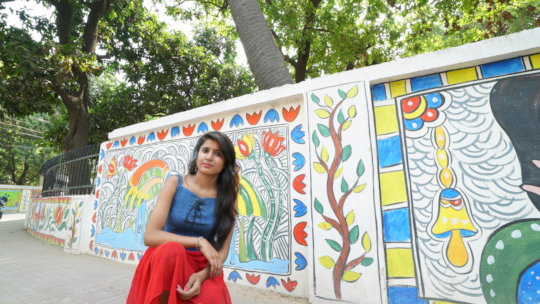 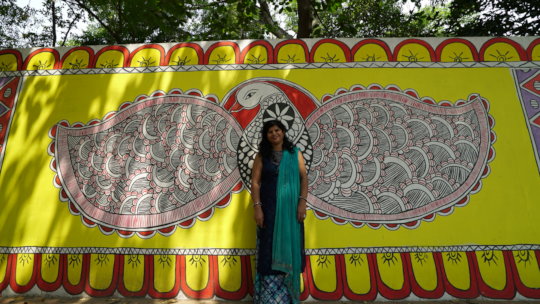 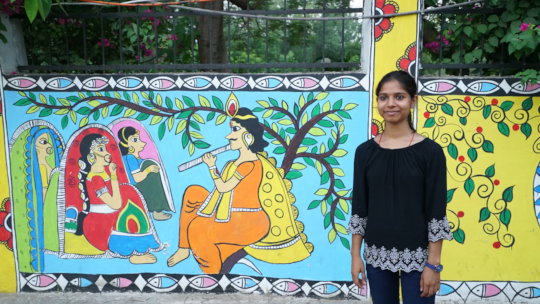 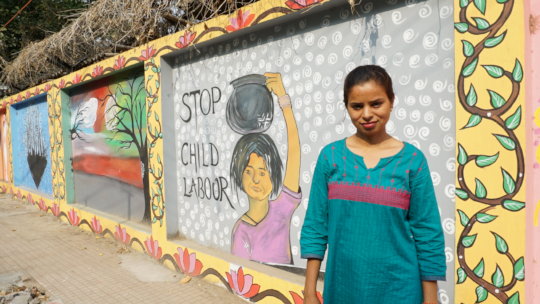 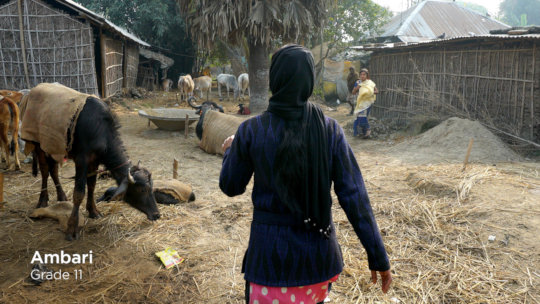 Racing into 2019 with a new project, Get a Plan, we began to research, write and design a new series of stories/graphic novels to enable young people to get a job or start an enterprise after the age of 18 in Bihar, India.

Get a Plan is exciting for three reasons.

First, it’s the first time we’ve had access to Grade 10 and 12, which as exam years, have been previously thought to be not part of the plan. They are now.

The other reason Get a Plan is exciting is that it links to equitable work of a young persons choice after Grade 12. We’re building a coalition of employers that will give young people a chance to get jobs or the ability to access finance to start an enterprise, making a real bridge from school to work.

And finally, the other cool piece is that the Government is giving us access to 1,000 Government Secondary Schools for the next five years that have Grade 9-12 in the building.

The key KPI? How many young people transitioned to work of their choice after five years.

This year we begin in 100 Government Secondary Schools and next year it scales to 1,000 schools and 400,000 young people a year.

If you are reading this, you probably already know how we create content but just in case, we’ve been in the field listening to young people co-designing our new epic graphic novels. Equipped with cell phones to take photos of their lives and markers to mark up the typos and circle the design they think should change in our stories, we’re listening.

And we hope you do too. Their voices for what they want to do in the future are powerful. There’s not just hope. There’s a plan. 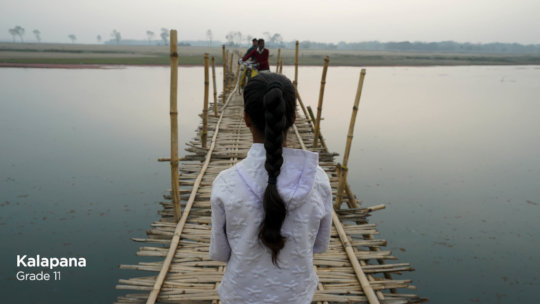 By Ana E. - Writer in residence 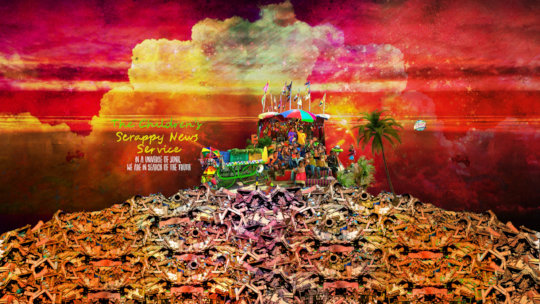 It has been an amazing year in so many ways and it would be interesting to chart the lines of our journey, of what we’ve learned, but thats perhaps best shared as a novella, an adventure reduced to metaphor when we’ve got our heads around it. In the meantime, perhaps the swiftest way to share is to say, we made Season 1 of The Children’s Scrappy News Service. Our pioneering, original children’s TV show aired on Colors Channel, Rishtey every Saturday and Sunday for six weeks. One million families tuned in every afternoon. What did we learn? That Rishtey was the right channel for reaching rural audiences, but our audience still does not have smart phones, so there was no digital response. They consumed. Watched together, entire families, grandma, grandpa, uncles, aunts, children and neighbors told us they wanted to make a place to play and they really wanted to learn how to swim. We live in an interesting time. Impact is measured by how much delight there is online and if there’s none, then we’re not sure what to do. We know children loved it. We watched them watch the show at home, at school, in wide open fields. We listened as they asked us about where the show was made, who is Dheeraj, Valesca, can anyone join the scrappy news service? As we put the lid on this year and label it, as one for the shelf, we’re thankful to be given a second chance. With funding for Season 2, we’re going to work with a channel that not only reaches our core audience but has a robust mobile/digital platform and reach. We might even be in four languages at once rather than just one. For now, we’re just excited we get to do it all again. At school, it’s been a year of wrapping up Grade 9 with what we’ve learned and working with the Government of Bihar to define a new project, The Class of 2023 or Get a Plan, it has two names so far. It is new content for Grade 10-12, featuring and exploring the jobs available in Bihar, from becoming a sports coach at school or becoming a policewoman, to starting an enterprise that fulfills a pressing need: garbage, clean energy. We’ve been researching the new stories, listening to young people, teachers and communities, engaging with industry and venture investors to try to make a real, actionable plan for each story’s transition from school to work, knowing that we’re still working in the realm of fiction, the unchartered territory of making it through Grade 12 and transitioning to equitable work of your choice. Fiction in 2018, especially for girls and young women, perhaps in the coming years fiction will become reality. At the end of 2018 we know this, silence is golden and sometimes, you are given a second chance to give a bold idea another try. Thank you India.