Daniel, the Executive Director of Project Education South Sudan moved his young family back to South Sudan in the early fall of 2015. Daniel’s wife and two small children, along with 2 other young relatives were living in an apartment in Nairobi for a year and a half, waiting for things to calm down politically and militarily in South Sudan. Daniel was traveling back and forth from South Sudan to Nairobi so he could have time with his family while still continuing the work in the Bor area of South Sudan. Sporadic fighting between rebel and government forces finally died down enough for them to feel it was safe enough for the whole family to return to Bor. They have been there for several months, and now the town of Bor is filling back up and the surrounding villages and rural areas that Daniel serves are repopulating as well. Daniel rented an office in Bor, so that he can be more effective in the work he is doing.

We continue our gratitude to all of you for sharing your hard earned dollars to support Daniel in his efforts to rebuild this impoverished and war-torn country. You are truly making a difference! Here are some of the recent accomplishments:

o   Grace wants a career as a doctor. She says being a doctor is a lifesaving work. “Doctors are second to God and I love to work with people, especially women and children,”

o   Aluel wants to be a pilot. “I want to be the first female pilot in South Sudan.” She is passionate about her profession, and determined to complete at the highest educational level.

o   Awuoi says, “I want to invent new things because our county is full of different minerals and I’m thrilled to have an engineering career.”

By Ray Stranske - Board Member 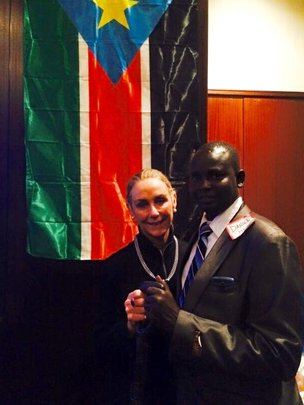 Look, we have a new Executive Director! After 10 years of tireless volunteer work, our founding Executive Director, Carol Rinehart, retired on June 1, 2015 and passed the elder stick to Daniel Majok Gai. Carol co-founded the organization with Isaac Khor Bher, a “lost boy of Sudan” after the two of them went to Sudan to find Isaac’s mother. Isaac and his mother had been separated by the countries long-lasting civil war for over 20 years. Education was the most important need in Isaacs’s home village of Konbeek, according to the elders. This request from the elders of Isaac’s village resulted in the launch of Project Education South Sudan.

Daniel Majok Gai was another “lost boy of Sudan” who located to Denver Colorado in 2001, coming from the Kakuma Refugee Camp in northern Kenya. Daniel worked on his degree in Psychology at the University of Colorado in Denver, became a US Citizen, and joined the work of Project Education South Sudan. In 2009, he too made a trip with the organization to be reunited with his family in Pagook, a short distance from Isaac’s village.

In 2011, Daniel offered to return to Sudan, shortly before South Sudan obtained its independence from the country of Sudan. Daniel went as a representative of Project Education South Sudan and decided to stay. On June 1 of this year, Daniel became the second Executive Director of the organization. He continues to live in Bor, South Sudan, making periodic trips to Denver to reconnect with supporters and friends.

How can we thank all of you enough for sharing your hard earned dollars to support Daniel in his efforts to rebuild his war-torn country? You are truly making a difference! Here are some of the things that have been happening recently: 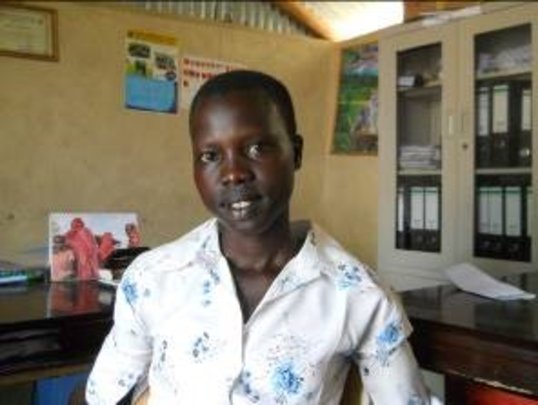 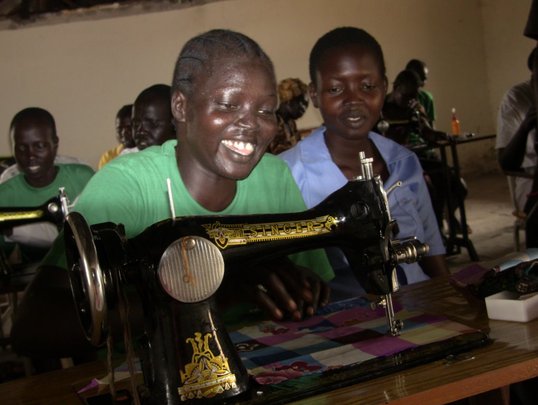 (The success of this sustainable program is because of the tremendous support we have gotten from all our of our GlobalGiving donors!)

PESS South Sudan Director, Daniel Majok Gai and I met  with Bor County Commissioner, Abraham Mamer Ruk to follow up and give him a final report on the HIV/AIDS Youth Leadership and the Sanitary Pad Production Programs. He was impressed with our three month project and with the number of pupils we had in our training classes who will in turn train the students at their four schools. The highlight is the whole state of Jonglei, through the Ministry of Education, will embed it in the school curriculum!

Daniel and I also traveled to Pagook, Daniel's home village and one of the areas PESS supports girls' education and builds classrooms.

During the crisis in December of 2013 everyone fled the quiet village of Pagook as their homes were set on fire, cattle stolen and approximately more than a dozen killed by the so-called rebels. Where there were once family tukuls (homes) now grows prairie land.

But the community is rebuilding and starting to come back home. That's why PESS is committed to making sure students have classrooms to come back to. "So many buildings were burned down and destroyed but people are rebuilding and we are building classrooms which will be ready to open soon... when people come back," said Daniel.

The highlight of the HIV/AIDS youth leadership program week of course was the last few days of the sanitary pad vocational sewing program. Frustrated frowns turned into bright smiles as the women and girls developed their sewing skills. The sweet hum of sewing machines were accompanied by the girls and women harmonizing and singing songs of praise. It was magical. Their songs illustrated how happy they are to be learning a skill that will transform their lives.

One high achiever and PESS sponsored girl, Anai, a Sunlight Primary student, even sewed a skirt and top all on her own earlier in the week and wore it to class. She has never sewn anything in her life... ever! So, of course we had to have a fashion show! Abuk played music from her cell phone while Anai walked the fashion cat walk and twirled the bottom of her dress. Then others joined in on the fun. Even Daniel strutted his fashion style (keep your day job, Daniel - lol!)

Then it was time for our graduation ceremony. Each woman who completed the course received a certificate and a gift bag containing brand new sanitary pads sewn by women in the U.S. and other personal items. After testimonies from 28 girls and women, each school was gifted a sewing machine, scissors, notions and tools to continue on their own based on what they learned from the business model segment of the class.

We were honored to have a representative from the Ministry of Education's office was also a guest speaker. He encouraged the women to not just complete their studies but to also go on to become leaders in their own way in their communities and throughout South Sudan. "It is said that if you educate a woman, you educate a nation. This is very true, especially here in South Sudan," Langbaar Modern Secondary School Principal made a commitment to carry on the sewing program by encouraging the students to form a club at Langbaar and the other schools to teach others who were not able to take the PESS courses.

David, Ministry of Education health care specialist and one of our team members said he and Rebecca, our other health care professional, will take the model of the entire program (both the HIV/AIDS Youth Leadership and Menstrual Management) to other parts of the community and Jonglei state. "We can't keep this knowledge for ourselves. We must make sure everyone is getting HIV/AIDS information and knowledge."

They opened their minds to new ways of thinking like understanding how stigma and discrimination can not only hurt an individual but it can also destroy a community.

Policy makers from the county, state and local level have made a commitment to take ownership and see that these programs continue, expand and adapt to more communities and people in Jonglei state and even throughout South Sudan.

Despite political posturing at the capital in Juba and with the African Union and the failure of so-called peace talks South Sudanese, at least those here in Bor, are determined, with the support of Project Education South Sudan, to become an educated, thriving country contributing to the rest of the global community. 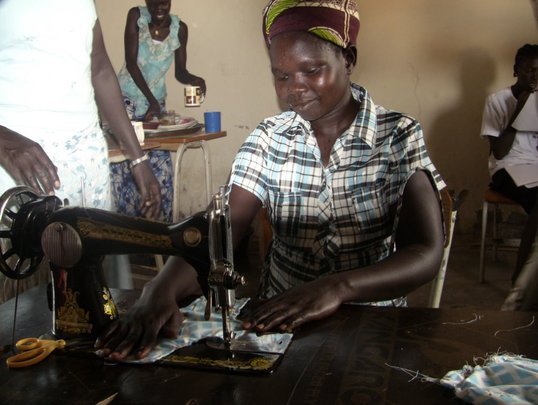 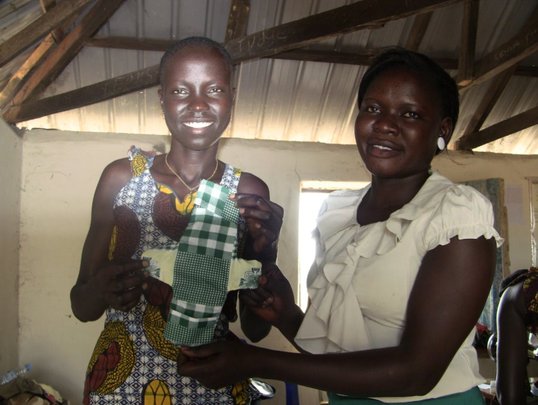 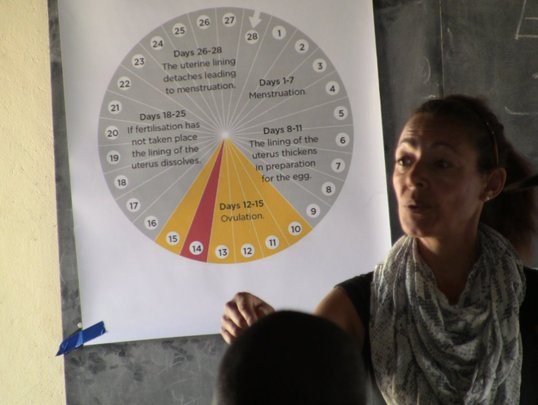 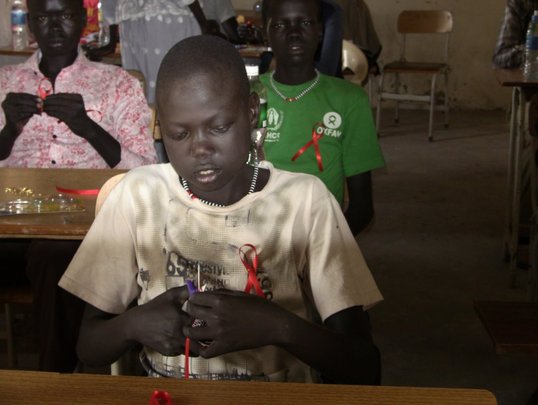 ‹ 1 ... 5 6 7 8 9 10 11 12 ... 15 ›
WARNING: Javascript is currently disabled or is not available in your browser. GlobalGiving makes extensive use of Javascript and will not function properly with Javascript disabled. Please enable Javascript and refresh this page.